Historic preservationists in Phoenix are fighting to save Arizona’s oldest American Legion Post as the city considers a redevelopment project for the property off Seventh Avenue between Polk Street and Grand Avenue.

If you drive along Seventh Avenue in downtown Phoenix, you could easily zip by a big parking lot surrounded by a chain link fence and miss the red, single-story building just beyond it. But not Opal Wagner.

“Please do right on the historic preservation piece on this project,” she told the city’s workforce and economic development subcommittee in June.

“It has functioned as veterans’ services and community services continuously for over a hundred years,” Wagner said. “It’s extremely well documented because each post requires its post to compile a history and all of those records exist.”

More than a hundred years ago, a charter member deeded his land to the city in exchange for the American Legion Post 1 getting a 99-year lease. Phoenix extended the lease so the Post could celebrate a hundred years while the city put the nearly 1.7 acre site on the market.

Christina Estes/KJZZ
View from the back of American Legion Post 1 in Phoenix on July 13, 2021.

“Ninety-two multi-family residential units are proposed on this site,” said Xandon Keating with Phoenix’s Community and Economic Development Department (CED). “It is a mixed-income development.”

Keating asked the subcommittee to recommend the full council enter into an agreement with the proposer, Milwaukee-based Cardinal Capital Management.

About 25% of the proposed units would be designated workforce housing — for households with incomes between 80% and 120% of the area median income. The remaining units would be for lower-income households. In all cases, veterans would get priority.

Missing from the pitch was how to preserve existing buildings in their entirety. And that bothered some nearby residents.

“If you do the project as the project is right now, you’re signing the death knell for that American Legion hall,” said Marilyn Rendon.

“We support this veterans’ housing 100%, just not in its current form,” said Beatrice Moore.

“The community, if I can speak for the larger group, is very disappointed with the outcome of the plan on the table,” said Bob Graham, a historical architect who lives and works close to American Legion Post 1.

Christina Estes/KJZZ
American Legion Post 1 was chartered in 1919 and in 1920 found a home at 7th Avenue and Polk Street in Phoenix.

Graham thinks the city should sell the property to Cardinal Capital Management for $1.6 million under one condition: “The council set, as a matter of policy, that the historical buildings on the site be preserved.”

He submitted a nomination to the National Register of Historic Places, but Christine Mackay, Community and Economic Development director, said they requested it be put on hold.

“The intention was not to stop a process," she said. "It was to allow the process to fully play out so that the city council, once we had a recommended proposer, could make the determination of what they thought was in the best interest of the property related to our veterans."

“There is the possibility of removing some portions of the building and still having a building that they believe is eligible for designation and would support moving forward to the keeper in Washington, D.C.,” she said.

Bob Graham, the local architect, presented an alternative design he said could preserve the building while also keeping the proposed housing and parking units.  Mackay said on the surface, Graham's suggestion looked reasonable and told the subcommittee she would connect Graham with the potential developer.

"We want to continue to be at this site, which is historic for our Legion."
— Patrick Mays, former commander, American Legion Post 1

Former Post 1 commander Patrick Mays read a statement at the request of the current commander. It said, in part: “We have engaged with Cardinal Capital and city staff and stand prepared to be the veteran service organization that would be part of this public-private partnership to redevelop the land where Post 1 has been since 1919. We want to continue to be at this site which is historic for our Legion.”

Keating told the subcommittee that the post has expressed to the city and Cardinal that “they are fully supportive of the proposal and moving forward with Cardinal Capital.”

If history is any indication, future meetings about the past will spark passionate debates. But as Phoenix weighs the need to add more affordable housing while upholding the city’s historic preservation policies, there will likely be consensus over a single skinny structure: the Post’s 150 foot pole that keeps the American flag soaring downtown. The city says it must stay — or be replaced with a similar sized flag pole. 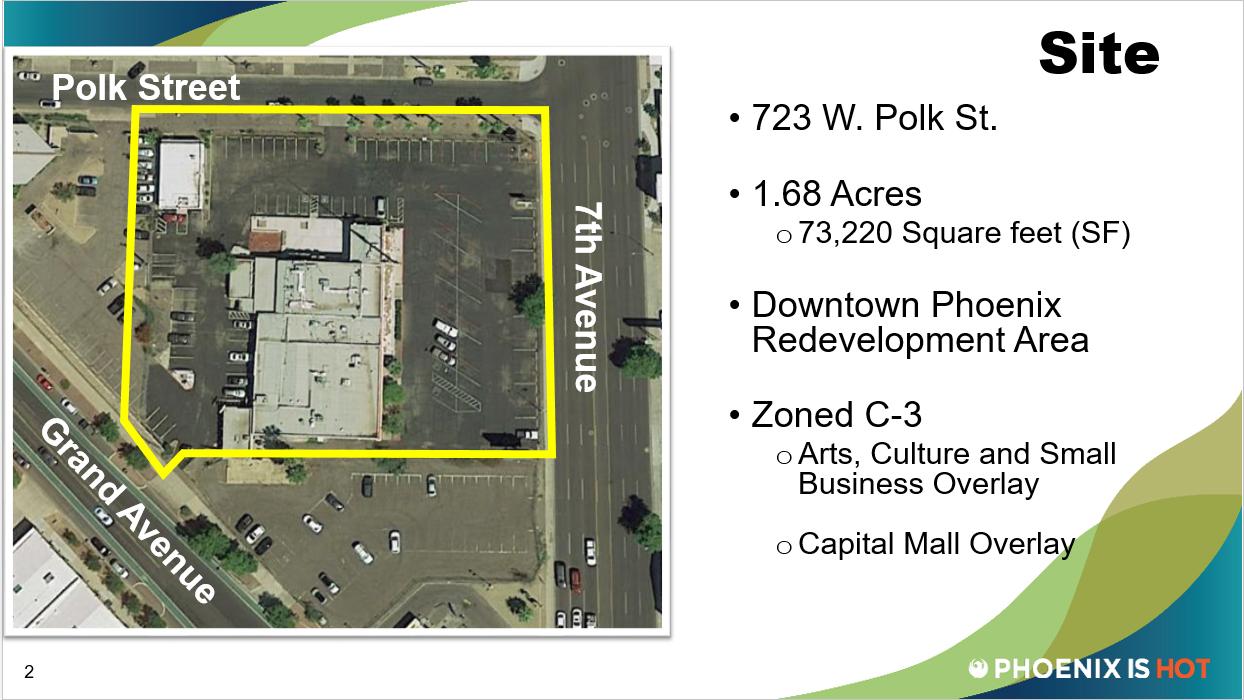 EDITOR'S NOTE: This story has been modified to correct the spelling of Keating's name.