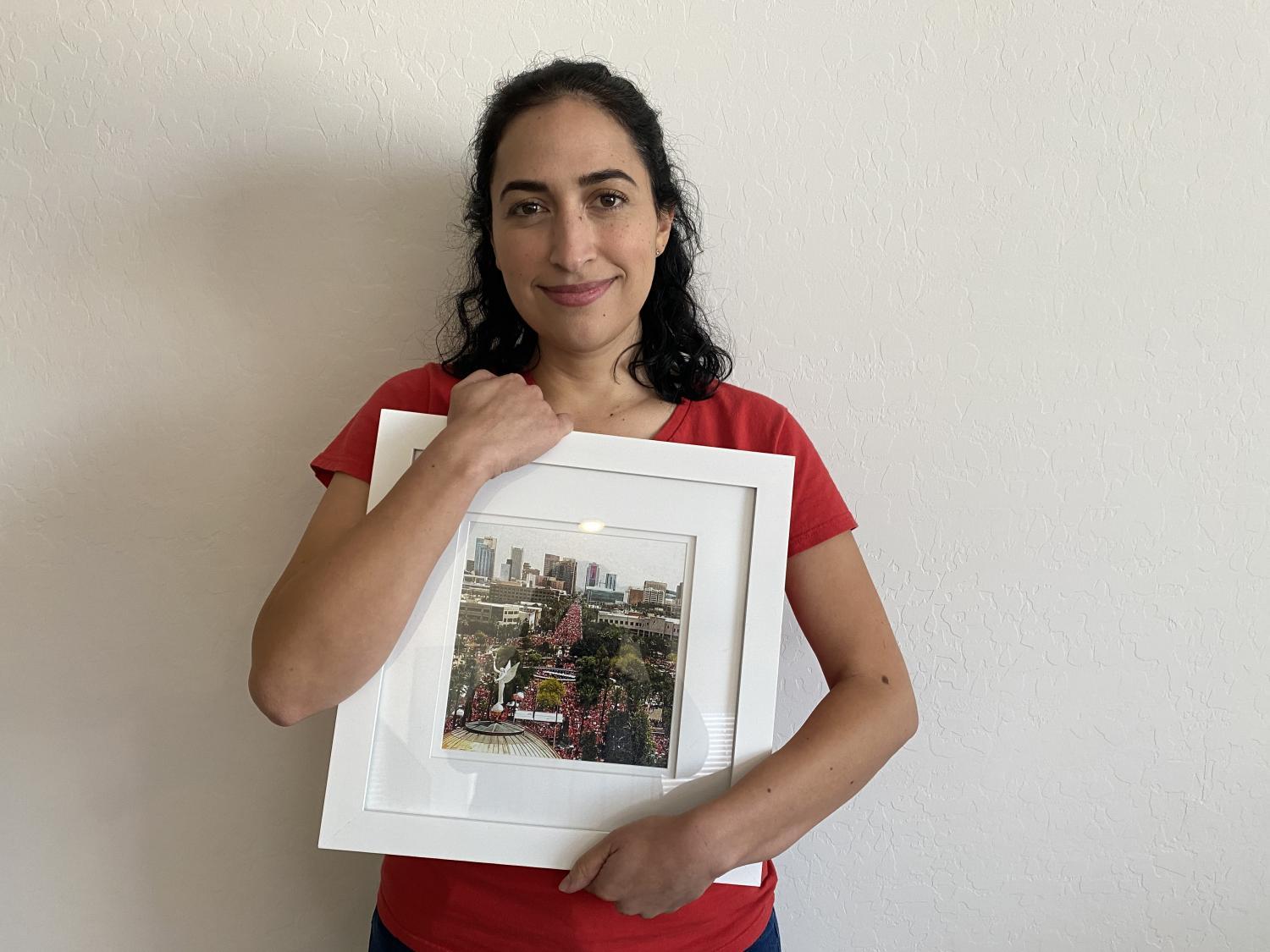 Rocio Hernandez/KJZZ
Phoenix teacher Elise Villescaz has taught in Arizona schools for eight years, and took part in the state's Red for Ed movement during that time. She decided not to renew her teaching contract at the end of the school year.

PART I: 'I Just Couldn't Do It': Educators Leaving Schools In Onset Of Pandemic

The pandemic changed schools dramatically when it began last March. In the beginning, all public schools in Arizona closed down due to safety concerns. But that wasn’t the case this school year. Some like Glendale Union High School District felt comfortable letting students back on a part-time basis by October.

That was a sobering moment for English teacher Elise Villescaz.

“To be told we're frontline workers, that we should risk our very lives and the lives of our loved ones to return to schools before a vaccine was widely distributed, for me that was a moment when I felt not only defunded and devalued, but dehumanized," she said. 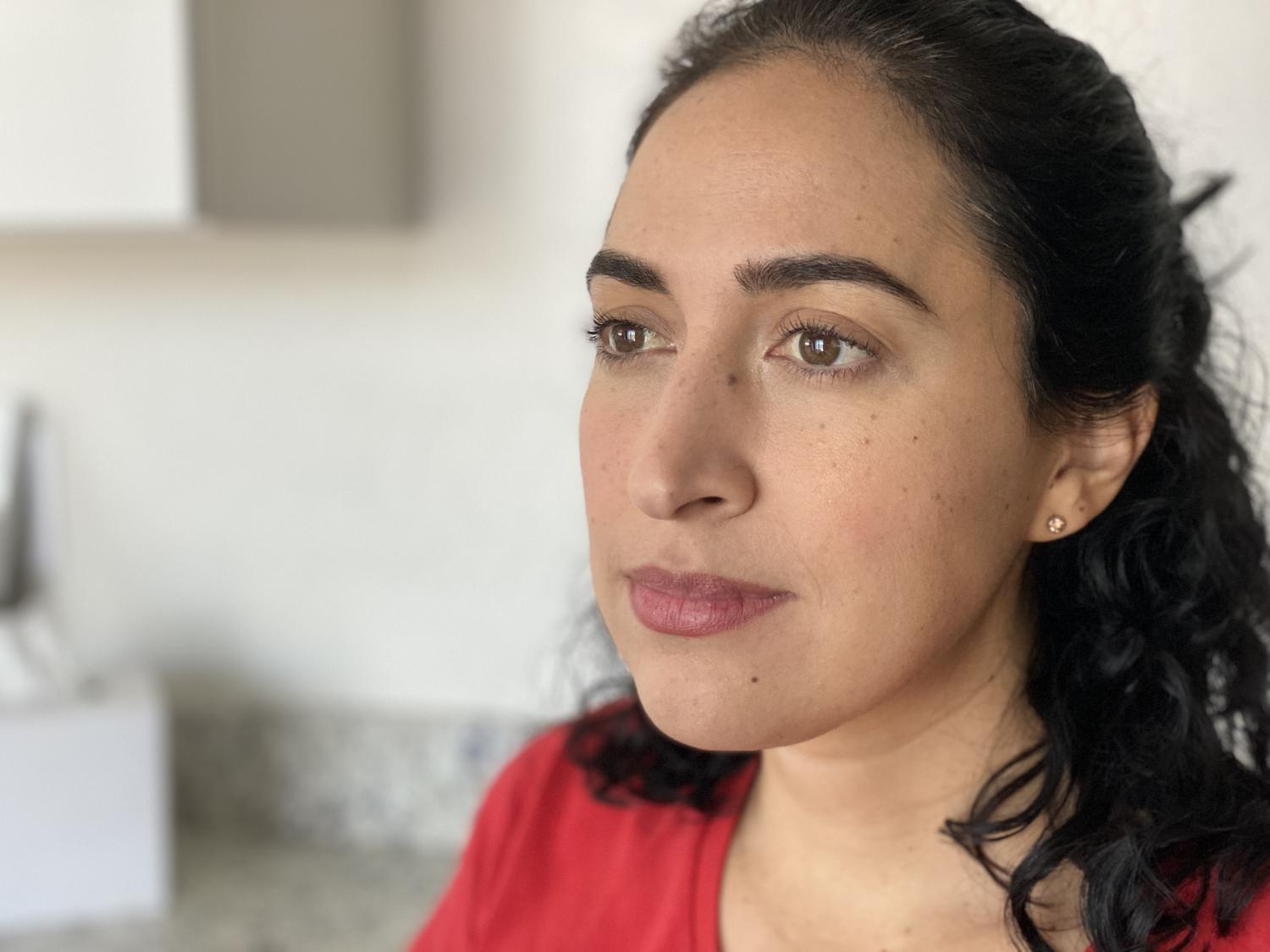 Rocio Hernandez/KJZZ
Phoenix teacher Elise Villescaz decided not to return her teaching contract at the end of the school year. Villescaz says this decision was years in the making.

Prior to the pandemic, Villescaz, who was in her eighth year of teaching, had already been thinking about leaving the classroom. But she tried to hang on for the sake of her students. After the pandemic, Villescaz said it just became too much and at the end of the school year she decided not to renew her contract with the Glendale school district.

Villescaz is not alone. About 750 Arizona educators severed their employment during the first few weeks of the 2020-21 school year. That’s according to a report by the Arizona School Personnel Administrators Association or ASPAA. By December 2020, that number jumped to close to 1,400. More than a third of those teachers cited COVID as their primary reason for leaving.

“Compared to December 2018, December 2019, when comparing with December 20, we had quite a bit more resignations that occurred mid-year," said Justin Wing, ASPAA board member and former human resources director for the Washington Elementary School District in Phoenix.

“Based on the information that I’ve been receiving, including what’s occurring in Washington, the teacher retention rate has either remained the same or has improved going into next school year which would not have been my hypothesis," he said.

And Wing has observed this positive trend at school districts that started in-person instruction earlier this school year, as well as those that stayed remote longer. 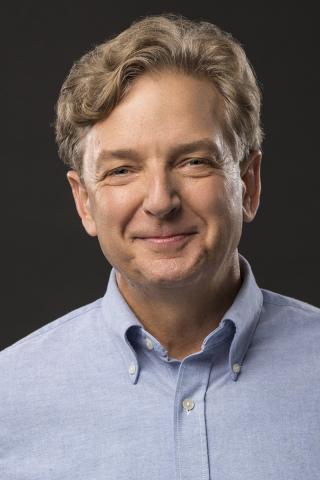 “That would have been probably another one of my couple hypotheses that those that treated their teachers well and respectful, likely saw high retention, but that was not the case," Wing said. “Teachers felt unheard, but they still had the high retention rate.”

“In general, in economic downtimes, employees as a whole regardless of the industry or the occupation, employees as a whole tend to quit their jobs less because there’s not other options out there," Richard Ingersoll said. "But my guess is once the economy picks up and we're sort of getting past the COVID that there might be a whole lot of pent up frustration and the retiring, quitting can go up dramatically starting this summer."

Ingersoll also suspects that teacher turnover will be further exacerbated by the stress that teachers experienced this past school year. 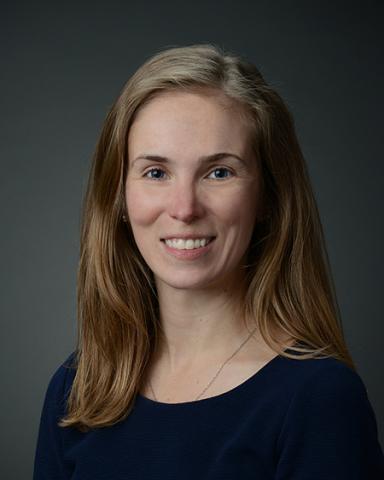 RAND Corporation
RAND Researcher Elizabeth Steiner was part of a study that found that stress was part of the reason teachers have left their jobs or reported they were thinking about leaving this past school year.

In fact, a recent study by the RAND Corporation found that stress was a big driver for teachers who have already left their jobs during COVID or reported they were likely to leave.

“Our emphasis is on teacher wellbeing," said RAND researcher Elizabeth Steiner. "We’re very concerned about the high levels of frequent job-related stress and the high levels of symptoms of depression and burnout that teachers are reporting.”

The RAND study includes recommendations on what school leaders can do to help teachers get through this moment. Steiner said that requires paying attention to what teachers have to say.

Once they do that, Steiner says schools can implement strategies to  address teachers’ mental health needs, and make their jobs easier going into next school year. 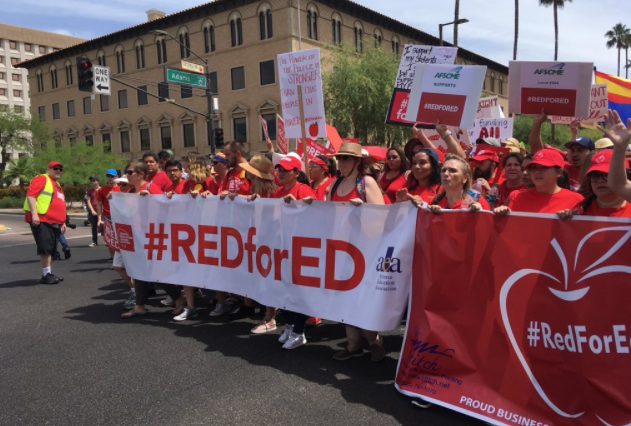 Phoenix educator Elise Villescaz has been surrounded by teachers all her life.

“I grew up in the classrooms of my mom, my aunts, my grandma and so I was around that educator power," she said.

But when she told her mother that she wanted to follow in their footsteps and become a teacher, Villescaz didn’t get the reaction she was expecting. 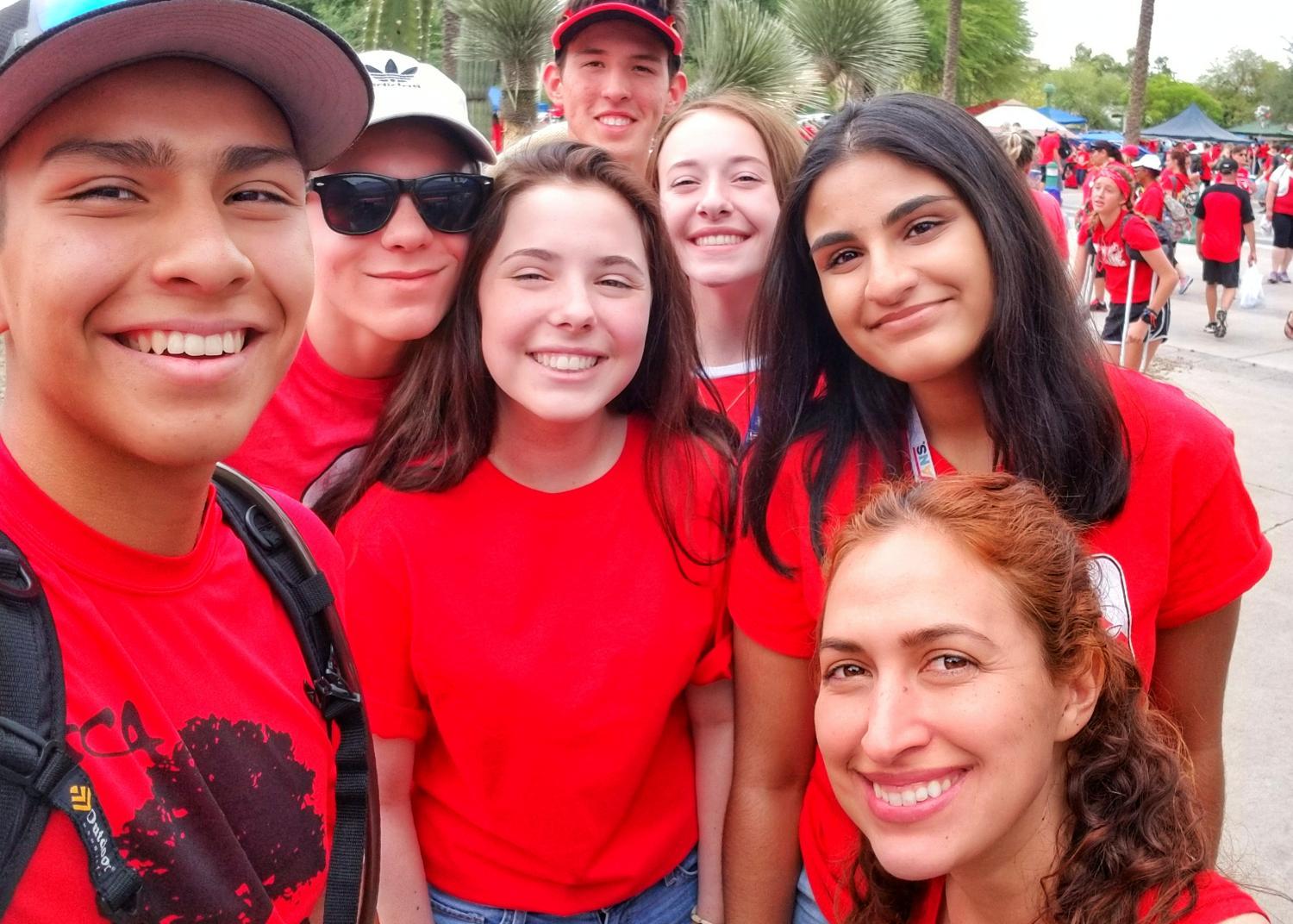 “She cried and not happy tears," Villescaz said. "“One of her primary concerns was my financial future. She wanted more for me because she knew what was ahead if I went into education.”

Villescaz went into teaching despite her mother’s warnings and fully understood the challenges that would come with it. She took part in the 2018 Red for Ed movement and fought better conditions for teachers and students. In her apartment, she keeps an aerial shot of a sea of teachers dressed in red leading to the state capitol.

"I keep these photos with me, framed, to remember who I fight for, who I fight with," she said.

But after eight years of cuts to education funding, salary freezes and a pandemic, Villescaz says she has decided to step away from the classroom.

“Choosing to be a teacher was the best decision I ever made, and leaving has been the most heartbreaking," she said.

In the Flagstaff Unified School District, local union president Derek Born is concerned about the number of certified staff or licensed professionals that he saw resign, take a leave of absence or retire before the last bell of the school year rang. 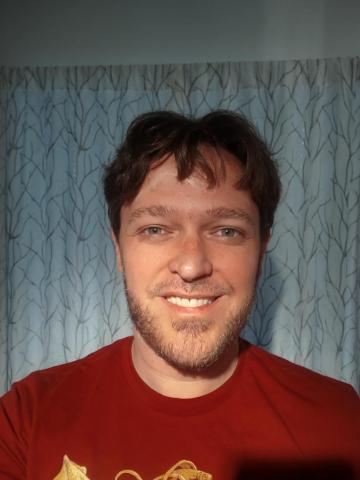 Derek Born
Flagstaff high school English teacher and local union president Derek Born says he saw a high number of colleagues severe their employment with his school district before the end of the school year, more than he's counted in previous years.

“Eighty employees officially having designated their departure at this point in the year is more than I’ve ever seen," Born said.

But the Flagstaff school district said in a statement this level of resignations is consistent with past years and says the district hasn’t had issues filling these positions in the past. However, Born is still concerned.

“I have a strong hunch that we are going to see more teachers leave either you know our district or even in some cases the profession than we’ve seen in a long time," Born said.

Nationwide, 1 out of 4 teachers considered leaving their jobs this past school year, an increase from before the pandemic. That’s according to a recent study by the RAND Corporation. RAND researchers found that stress was contributing to the teacher turnover. But in Arizona, Born said common problems like stress and burnout aren’t the only reasons his colleagues are quitting.

“I’ve had people reach out and say I just can’t take this anymore, this feeling of constant disrespect from the state Legislature and feeling like our profession is micromanaged to the nth degree," Born said.

Born is referring to educators’ frustrations over policies that lawmakers passed this Legislative session. This includes a restriction on  certain instruction related to race, ethnicity or sex which educators refer as the teacher gag law.

Teachers also saw the state’s tax plan and a law that creates a new category for small businesses as efforts to undermine Proposition 208, which is meant to raise new money for schools by increasing taxes on the rich. 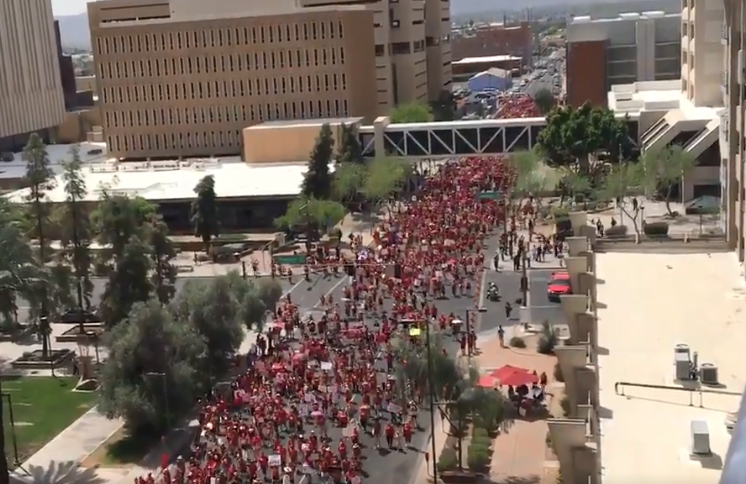 Casey Kuhn/KJZZ
#RedForEd supporters march to the Arizona Capitol. Phoenix teacher Elise Villescaz was one of them.

These political efforts by the Republican majority in the Arizona Legislature were part of the reason Villescaz quit. And since the session end last month, Villescaz has heard many of her colleagues are also thinking deeply of what this moment means to them.

As for Villescaz, she’s not sure when she will return to the classroom, or if she ever will, but she really hopes she can.

“There is no work I can imagine that will sustain me and inspire me quite like teaching has," she said.

But for now, Villecsaz is considering returning to school full-time to study law, and find what’s next.