Howard Fischer/Capitol Media Services
Don Shooter addresses colleagues in early 2018, before they voted to oust him from the House over charges of sexual harassment. 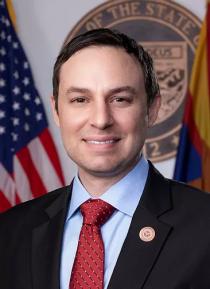 State lawmakers have absolute immunity from being sued by those who are the targets of legislative investigative reports, the Arizona Supreme Court ruled Wednesday.

In a unanimous decision, the justices said that ousted Rep. Don Shooter has no legal right to pursue a defamation lawsuit against then-House Speaker J.D. Mesnard for publishing a report by an outside legal team that concluded the Yuma Republican was guilty of violating a "zero tolerance" policy against sexual harassment. Justice Ann Scott Timmer, writing for the court, said ordering the report and then releasing it is an official legislative function for which lawmakers are constitutionally entitled to immunity.

But the justices said that lawmakers lose that immunity when they start publishing press releases about what they do. And that includes writing about and explaining the official report.

"A legislator who issues a news release does not perform a legislative function but instead engages in a political act," Timmer wrote. And she brushed aside Mesnard's contention that the release was simply designed to explain his decision to ask the full House to expel Shooter, saying that was not necessary.

Wednesday's ruling clears the way for Shooter to now pursue defamation charges against Mesnard, now a member of the state Senate.

The new decision sets some important limits on the scope of a provision of the Arizona Constitution. It says that "no member of the legislature shall be held liable in any civil or criminal prosecution for words spoken in debate." The ruling makes it clear that immunity extends not just to floor debate and speeches but to other acts the court concluded "are an integral part of the deliberative and communicative processes." And that covers not just whether to approve or reject proposals but "other matters which the Constitution places within the jurisdiction of either house."

And that includes determining whether to discipline or expel its members.

But Timmer spelled out there are limits to all that.

"Making speeches outside the legislative body, performing tasks for constituents, sending newsletters, issuing news releases, and the like are political acts which are unprotected by legislative immunity," she wrote. Similarly, Timmer said, lawmakers have no protection when they lobby a state agency to administer a law in a particular way.

She also rebuffed Mesnard's claim that his decision to issue the release was within his authority as speaker. She said the release "communicates only his personal views and plans rather than those of the House."

The House voted 56-3 to oust Shooter after the investigative report commissioned by Mesnard found "credible evidence" that he violated anti-harassment policies with then-Rep. Michelle Ugenti-Rita (R-Scottsdale). That included making sexual comments and suggestions and making "unwelcome sexualized comments" about her breasts.

The investigators also found incidents of harassment and improper conduct or comments involving others, including a lobbyist, a newspaper staffer, and the former publisher of the Arizona Republic.

In filing suit, attorneys for Shooter argued that report was "materially altered" from what the investigators originally produced. Among the items missing from the final report, the lawsuit says, is evidence that Ugenti-Rita had herself sexually harassed a female former legislative staffer. That information Shooter argued, could have undermined Ugenti-Rita's credibility.

Timmer said that claim, even if true, is legally irrelevant. She said as long as Mesnard was dealing with the report, he was acting within his legislative capacity and therefore entitled to the constitutional protections. He crossed the line, Timmer said, only when issuing the press release.

The defamation case is only one of the pending legal matters involving Shooter. He filed a separate claim against the House saying that his rights were violated in the manner he was ejected. Shooter said he was denied due process, pointing out that the process did not follow the usual procedures, like first having an Ethics Committee investigation where he could present witnesses and evidence of his own.

A trial judge threw the case out, concluding legislative chambers have an absolute constitutional right to decide how to deal with their members. That case now awaits a ruling from the 9th U.S. Circuit Court of Appeals.