Will Labor Unions Grow In Arizona? 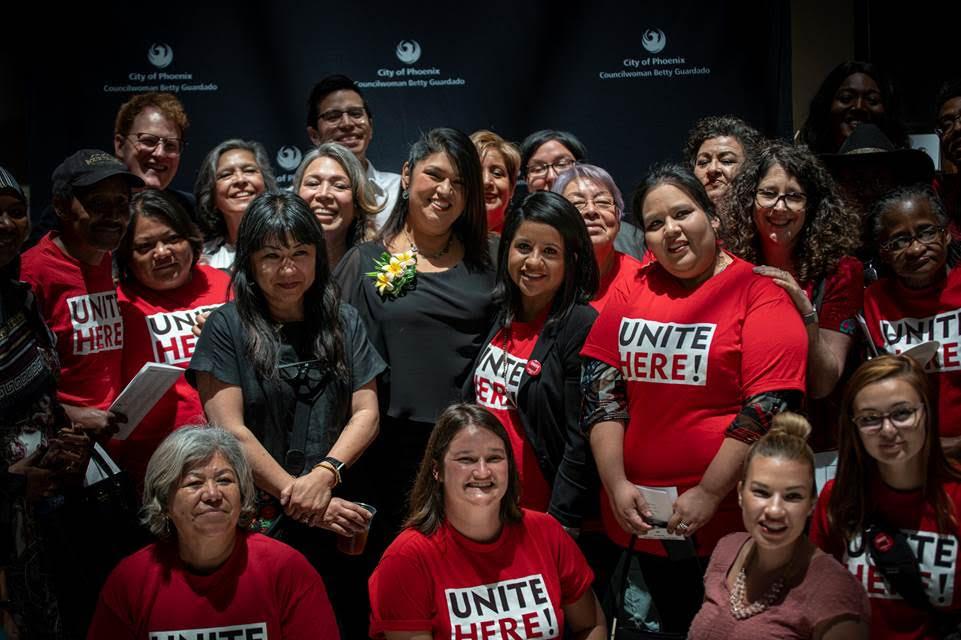 City of Phoenix
Phoenix City Councilwoman Betty Guardado (center) is surrounded by members of Unite Here Local 11 at the inauguration ceremony in 2019.

From the White House to Phoenix City Hall, labor unions arguably are finding their strongest advocates in years.

From Union Organizer To City Councilwoman

During Betty Guardado’s swearing in ceremony for Phoenix City Council in June 2019, she shared the stage with members of Unite Here Local 11, a union representing hospitality workers. Before joining the council, Guardado was an organizing director for the union.

After taking the oath of office, Guardado said, “We want to do everything we can to create more quality jobs and to make sure the jobs our residents already have pay enough to raise a family, provide adequate healthcare and be able to save for retirement.”

While promising to be a voice for residents in her west Phoenix district and working families across the city, Guardado added, “But I expect you to roll up your sleeves and do this with me.” 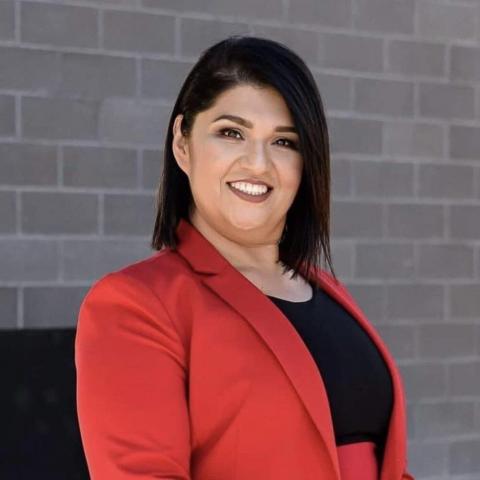 And they have — especially during the pandemic when members of Unite Here Local 11 called into city council meetings over and over to complain about working conditions at restaurants at Sky Harbor Airport.

As a union organizer, Guardado negotiated with multi-national companies on behalf of airport workers. As a city councilwoman, Guardado has more leverage. When global companies HMS Host and SSP asked Phoenix to cut their rent for dozens of restaurants at Sky Harbor, Guardado used her position to advocate for workers.

“I know that you guys can do better,” she told HMS Host during a November 2020 meeting of the Phoenix Transportation Subcommittee. “And I’m pretty sure that you guys will, but I really, really need you guys to do that.”

Guardado pushed the companies to publicly commit to ensuring adequate breaks and personal protective equipment, postponing layoffs, and recalling employees based on seniority.

Councilwoman Laura Pastor and former Councilwoman Thelda Williams, who was committee chair in 2020, told the company the city expected written confirmation that employees would be called back by seniority before city leaders would discuss additional rent relief.

“I will tell you from my perspective, this is not a council or a subcommittee you want to play games with,” Williams said in November 2020.

But a few months earlier, in July 2020, Guardado and Council Members Carlos Garcia and Laura Pastor found themselves backpedaling. The trio proposed ordinances aimed at the hospitality industry citywide that included capping the amount of areas housekeepers could clean during an eight-hour shift and adding 80 hours of sick leave for those not covered under the Family First Coronavirus Response Act.

Businesses pushed back hard. Then-Arizona Chamber President Glen Hamer called it a union power play and told KJZZ's The Show businesses were stunned by the proposed regulations and not part of the process. The council members withdrew the proposal just before the council meeting began.

In a June 2021 interview with KJZZ, Guardado said she recognizes a company must make a profit but, “I think that employers do take advantage of workers and I do think that when workers have a union and they have a voice on the job, it’s a little bit more fair.” 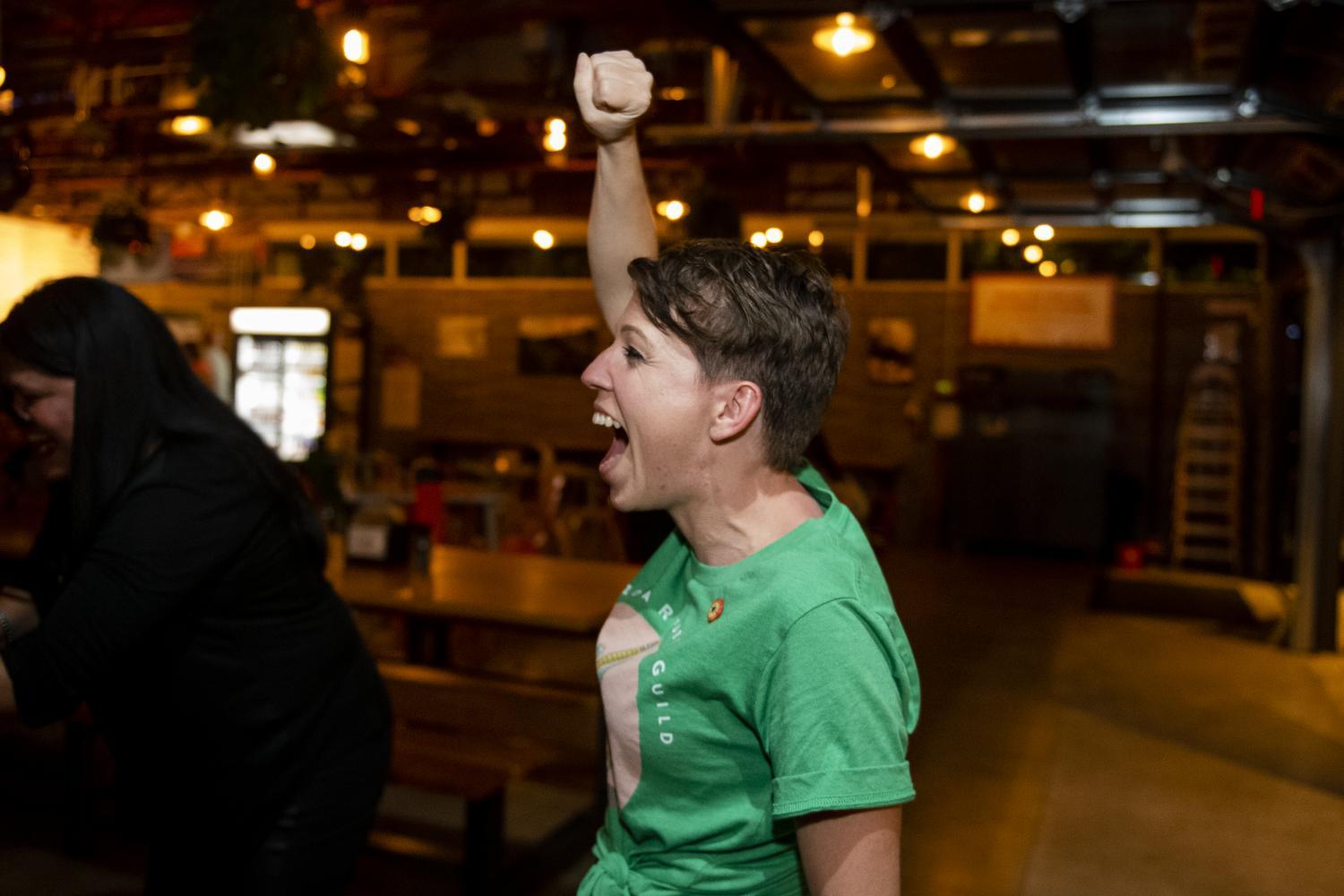 Valerie Moffat
Rebekah Sanders cheers after the majority of the Arizona Republic newsroom employees voted to unionize in October 2019.

That kind of thinking led to a historic vote at Arizona’s largest newspaper in October 2019. A majority of newsroom employees, including reporters, photographers, and digital journalists voted to form the Arizona Republic Guild, a unit of the NewsGuild-CWA (Communications Workers of America).

“We were staring a major corporate merger in the face,” said Rebekah Sanders, a 13-year reporter for the Republic and unit chair of the Arizona Republic Guild.

Mergers generally come with promises to cut costs. In the case of GateHouse Media’s acquisition of Gannett, which owned the Republic, USA Today and more than 100 other outlets, management pledged to save $300 million.

By forming a union, employees received immediate legal protections. For example, their pay and benefits cannot be cut while the union and company negotiate a contract. But 20 months later, there’s no agreement.

“The money is there, papers are profitable,” Sanders said “It’s a question of where those profits go. Do they line the executives’ pockets or do they invest in newsrooms and pay journalists who are doing important work for the community a living wage?”

In 2020, the nonpartisan think tank, Council on Foreign Relations, reported income and wealth inequality in the United States was higher than in almost any other developed nation and on the rise.

“I think the discussion about income inequality is so important,” said Todd Sanders (no relation to Rebekah), president and CEO of the Greater Phoenix Chamber.

“A lot of work we do is workforce development, in making sure that we have people that are ready and qualified for high-wage, high skilled jobs,” he said.

Those jobs are also important to President Biden, but his position is very different. A Washington Post analysis of Biden’s statements and proposals shows he advocates for unions much more than other 21st century presidents.

On Jan. 20, 2021, Biden’s first day in the Oval Office, he signed an executive order saying it is the policy of the United States to encourage union organizing and collective bargaining and the federal government should serve as a model employer.

In April 2021, Biden created a White House task force to promote labor union organizing and investigate how the executive branch can encourage unionization.

He said chambers are not anti-union, they’re pro-fairness.

“You know generally speaking, membership based organizations have to survive based on what they’re doing for their members and so you got to wonder where are unions today? How relevant are they if they have to be propped up and promoted by the president and the cabinet?” he said.

In 2020, the Bureau of Labor Statistics (BLS) reported union members accounted for 10.8% of wage and salary workers nationwide, down about 2.2% from 2019. In Arizona, union members made up 5.3% of workers, compared to 5.7% in 2019. (The BLS said caution should be used when comparing 2020 union data to earlier years because of COVID-19. Read details at end of this story).

While salaries vary by industry, occupation, location and other factors, the BLS said the median earnings of union members are about $200 higher per week than non-union members.

In 2020, the BLS said Arizona had 155,000 union members and another 52,000 workers were represented by unions or an employee association. Unlike some states, unions in Arizona cannot require workers to pay dues even if they’re compensated under a union contract.

Sally Davidow with the NewsGuild-CWA said national dues are about 1.34% of a member’s salary. The union represents more than 25,000 journalists and other communications workers like spoken-language and sign-language interpreters and translators and employees of publishing houses.

In an email, Davidow said there’s been a surge in union organizing since 2015, “About 5,000 new members have organized NewsGuild units in the last few years.”

A Gallup poll from last September showed 65% of Americans approved of labor unions, the highest level since 2003.

At the Arizona Republic, Rebekah Sanders said employees who initially opposed unionization are now supporters, “In the end, it creates such a wonderful sense of solidarity.”

“We tend to be a pretty independent type state and so I think you will probably see some natural swings either way but I don’t think you’ll see a huge uptick in union membership in Arizona,” he said.

“You know the housing crisis, all of these issues that we’re facing, I mean, that’s the core of the issue – like people don’t make enough to be able to provide for their families,” she said.

While labor and business agree in some areas, like offering apprenticeships and training programs for workerfs, they remain divided over how much influence employees should have when it comes to things like compensation, workplace policies and operations.

A 2021 Ipsos survey found close to 60% of Americans believe income and wealth inequality is the most serious form of inequality in the United States. Proposed solutions vary as much as income levels: a higher minimum wage, a tax on the wealthy, tax cuts for businesses, increased union membership, more job training.