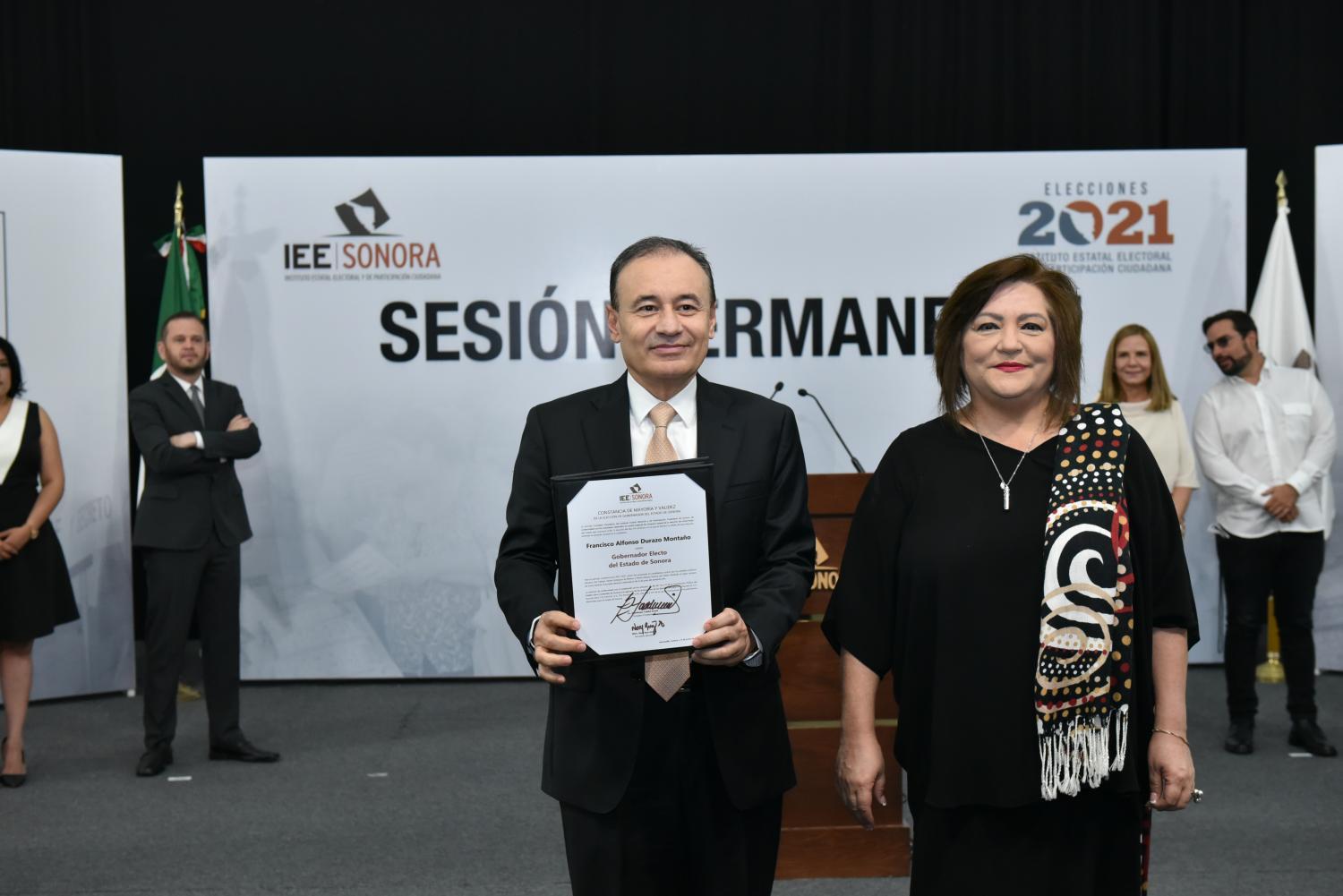 “With this solemn ceremony, the mandate sent by the people on June 6 takes full legal force,” Gov.-Elect Durazo, who will take office in September, said.

Durazo took a majority of votes, and did so against five competitors. The closest was Ernesto Gándara, who came in more than 15 points behind representing a coalition of three mainstream parties, two of which were previously the state’s principal political forces.

Now that mantle seems to have passed to Morena, the party of Mexican President Andrés Manuel López Obrador. Beyond the governorship, voters also gave the party and its coalition partners a majority in the state congress.

“We are going to leave behind the long era of Sonora being conceived of as a treasure to plunder, while the immense majority of households lack the essential,” Durazo said, adding that “Sonora for the few will come to an end, and wide avenues will open to a Sonora that is proudly for all Sonorans without exception.”

He spent most of the speech charting a path to break from his predecessors. But when it comes to Sonora’s long standing political and economic relationship with Arizona, continuity seems more likely. 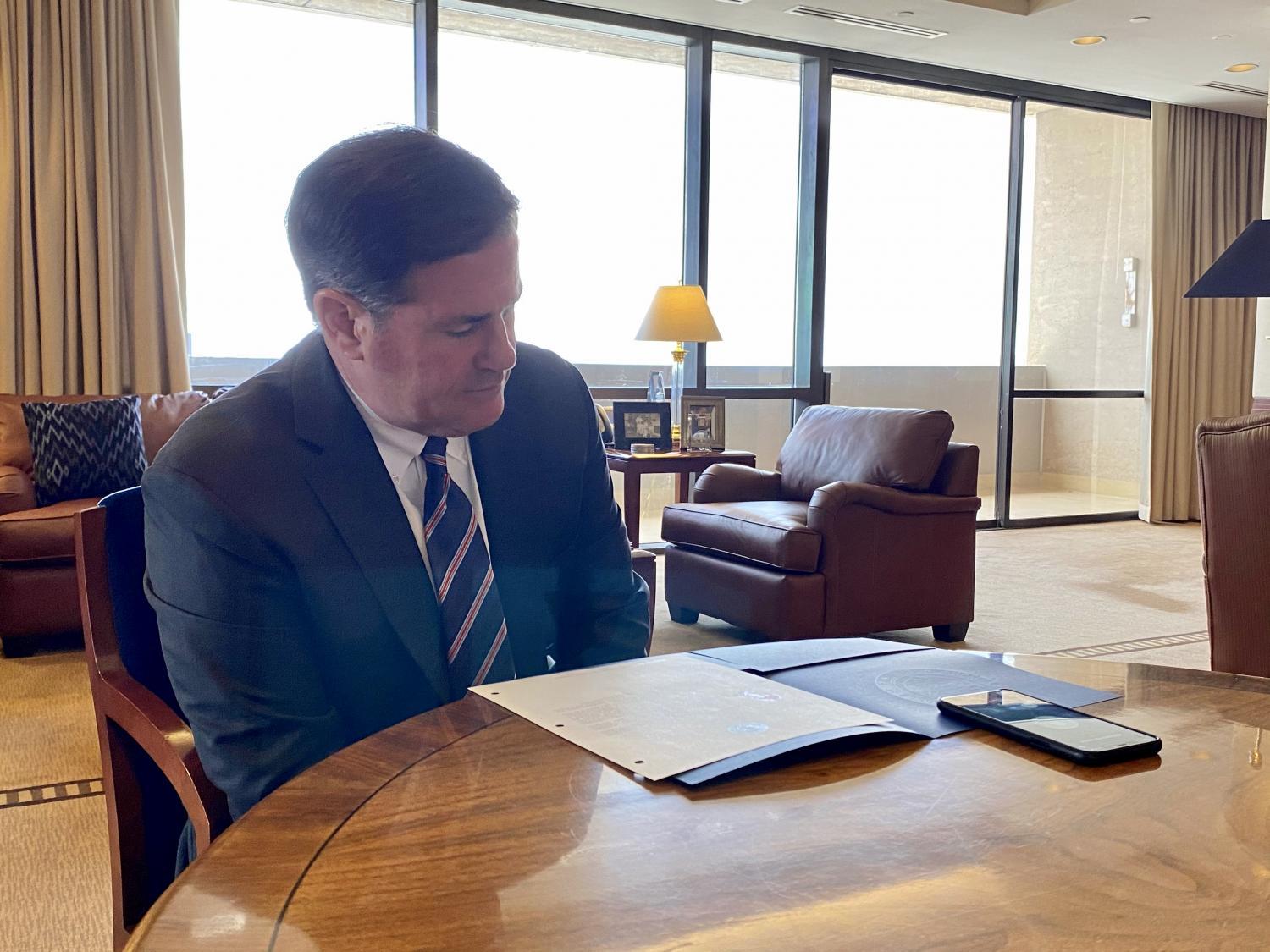 The day after the election, when preliminary results showed his sizable advantage, Arizona Gov. Doug Ducey called Durazo to congratulate him. And invite him to the “continued partnership between Arizona and Sonora,” according to a tweet from Ducey.

Durazo responded in kind, saying that consolidating the binational relationship will be part of his recovery plan for the state, according to a pair of his own tweets. Based on respect, he said the relationship serves as an example of binational cooperation, and benefits the region.

“I expected nothing less,” said Pablo Wong González, director of CIAD, a Sonoran research center that focuses on development and nutrition. Wong has studied the two states’ relationship for many years.

“There is an interdependence (between the states) in productive activities, in tourism, manufacturing,” Wong said. “And beyond that the social ties between families. So, there is an interconnectivity, that both states benefit from this relationship.” 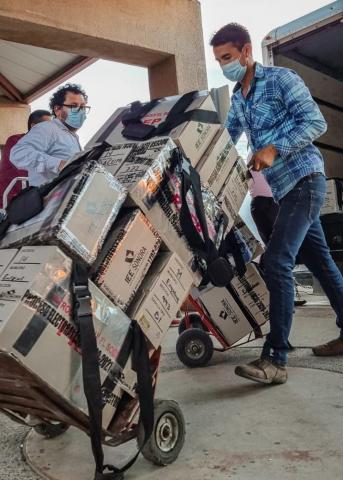 More than any specific projects or collaborations, Wong said one of the main virtues of outgoing Sonoran Gov. Claudia Pavlovich’s relationship with Ducey was that both simply worked to maintain it, even while former President Donald Trump's administration sought to harden the line between the two countries.

But with the Biden administration in power, Wong says there is now a more “favorable” climate for the relationship, as well as for a rethinking of the region, and implementing strategic projects and a longer-term vision. He cited Durazo’s campaign promise to modernize the Guaymas Port as an example of such projects.

“That good relationship (between Arizona and Sonora) could be an essential element for the economy to properly function at the local level,” said Alvaro Bracamonte, a researcher with the Colegio de Sonora. He’s been a part of a large project looking at the economic impacts of the pandemic in the region.

As pandemic measures went into effect last spring, employment fell hard, especially in critical sectors like export agriculture and tourism, and it has yet to fully recover, said Bracamonte. While the state’s economy didn’t fall as dramatically as many others in Mexico, its recovery since has been slower.

But there are positive signs, like increasing exports, which is especially significant for an export-heavy state like Sonora. Nevertheless, Bracamonte said Durazo will face his share of challenges as he takes office, not least of which is the ongoing historic drought that threatens to devastate agricultural production.

Another challenge likely to define Durazo’s term will be rising violence, which he has said will focus on “personally, every day.” 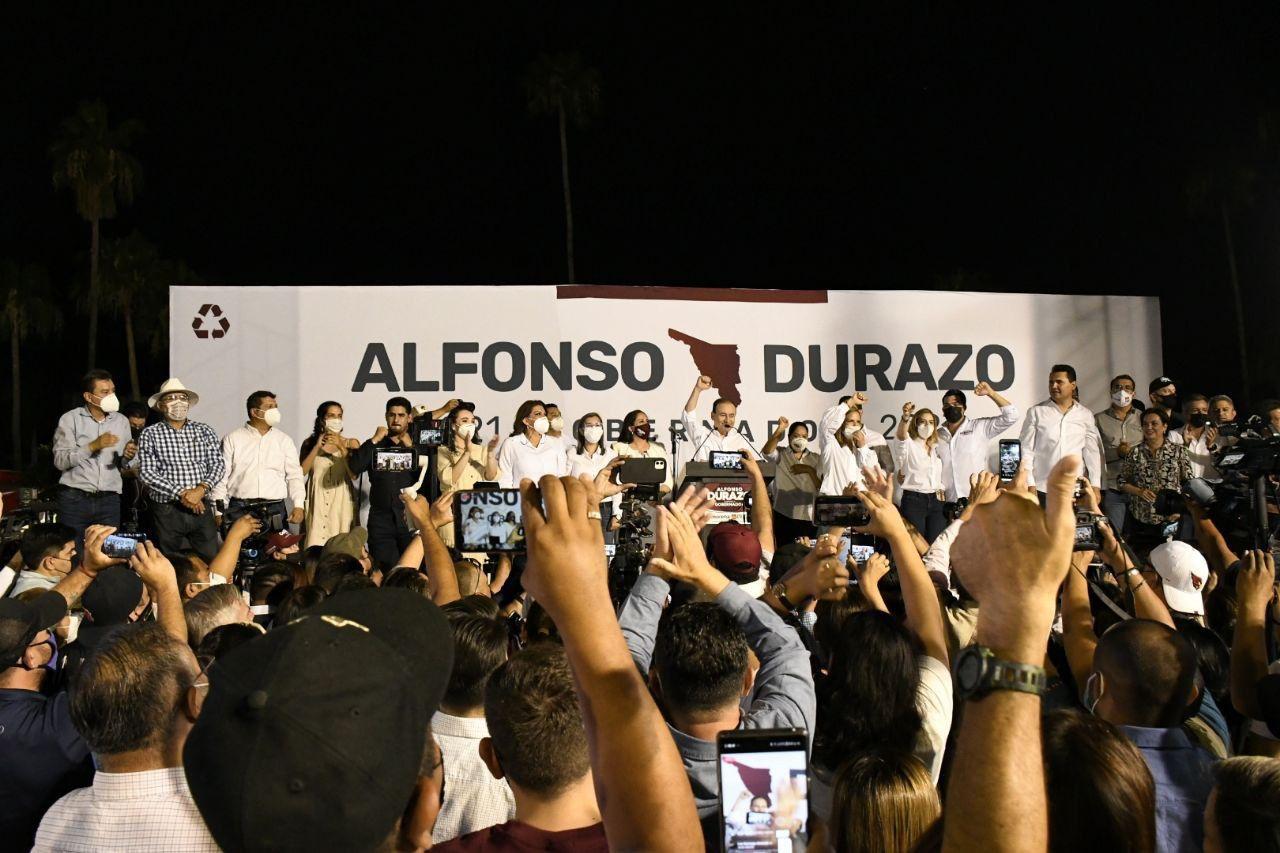 Morena
Alfonso Durazo (center) at a rally the evening of election day.

2020 was a record-breaking year for murder in the state, as was the year before, during both of which Durazo served as national security secretary. 2021 is well on its way to setting a new record, and April appears to have been the most violent month in the state in recent decades.

As governor, Durazo said he’ll substantially increase the number of state police and create a body to investigate criminal organizations’ finances, among other measures to reverse the alarming trend.

“In general, the ideas are good,” said Manuel Hoyos, head of the Observatorio Sonora por la Seguridad, a civil society group that focuses on security issues.

But he warned that simply adding police officers is no panacea, and doesn’t on its own mean greater security. Increasing investigative capacity, to tackle the high rates of impunity for violent crimes, is key.

Also important are simply diagnosing the underlying problems, working to adequately fund the proposals to solve them, and having short-, medium- and long-term courses of action, Hoyos said.

And being willing to change course when those plans don’t work.