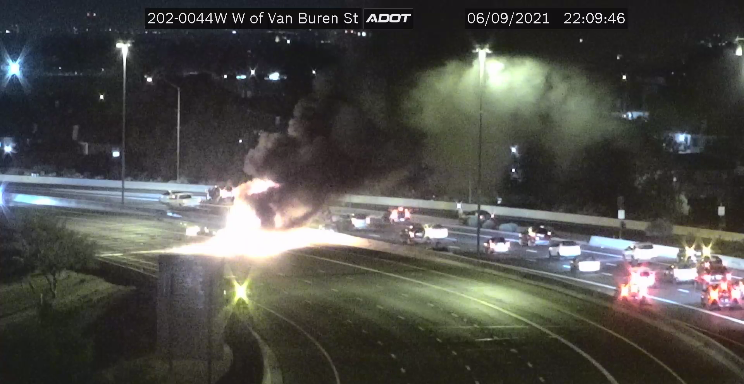 Arizona Department of Transportation
A total of eight vehicles were involved in the a June 9, 2021, fatal crash that closed the Loop 202 freeway in Phoenix.

A milk tanker going too fast for traffic conditions collided with seven passenger vehicles on a Phoenix freeway, killing four people and injuring at least nine others, authorities said Thursday.

A total of eight vehicles were involved in the Wednesday night crash that closed the Loop 202 freeway overnight near 52nd Street.

The tanker “failed to slow for traffic congestion" and impairment was ruled out, the Arizona Department of Public Safety said in a statement.

After the initial collisions around 10 p.m., the trailer of the eastbound tanker rig separated from the tractor and went over the freeway's median wall and ended up on its side in westbound lanes, the DPS said.

“This could take several days, if not weeks, before we can ask those finer questions to be able to try to reconstruct what it is that occurred," Garcia said.

The incident required a second-alarm response because of the number of people requiring evaluation, treatment and transportation, the Fire Department said.