The Arizona Department of Corrections is required to monitor and record mental health encounters with incarcerated patients, as agreed to in the ongoing prison health care settlement Parsons v. Shinn.

The department contracts with Centurion of Arizona to provide health care services in the 10 state-run prisons.

DOC monitors submit a review of Centurion’s encounters with mental health patients every month, in accordance with the settlement.

But the way those encounters are conducted and recorded have come under repeated scrutiny from attorneys representing the prisoners.

After three people incarcerated in Arizona state prisons died by suicide in the span of four weeks in 2020, a medical expert who reviewed the deceased inmates’ medical records determined a lack of proper mental health care directly contributed to their deaths.

ACLU National Prison Project Director David Fathi says the expert psychiatrist concluded that in all three cases, “the brief and superficial nature of their mental health encounters was a contributing factor to their suicides.”

In a further case review, Fathi says his office has found hundreds of incidents of inmate mental health encounters lasting just a few minutes. But he says the state was still recording the encounters as compliant with the settlement.

"We've uncovered this widespread practice of drive-by mental health encounters that are as short as five, three and sometimes just one minute in length," Fathi said. "Obviously there is simply no way to provide meaningful, adequate, mental health care in a one- or two-minute encounter."

In response to those findings, Fathi and co-counsel asked the federal judge overseeing the settlement agreement to further define what could be counted as sufficient time spent on mental health encounters.

Judge Roslyn Silver ordered that the encounters must meet minimum durational requirements to satisfy the performance measures (PMs) of the settlement, which is known as the stipulation.

“While the Stipulation does not mandate the length of visits, it is not plausible the parties intended these PMs to be satisfied by visits lasting five or ten seconds,” Silver wrote. “The only rational reading of the Stipulation is that to be ‘seen’ requires a meaningful interaction between the prisoner and the mental health professional.”

Silver set new specific time thresholds for mental health encounters: 10 minutes for patients on suicide watch, and all other encounters must be a minimum of 30 minutes.

After the Department of Corrections used the new thresholds to review mental health encounters, scores at six state prisons fell dramatically out of compliance.

Mental health encounters at the Yuma prison that were recorded at nearly 100% compliance for a year fell to only 5% compliance. 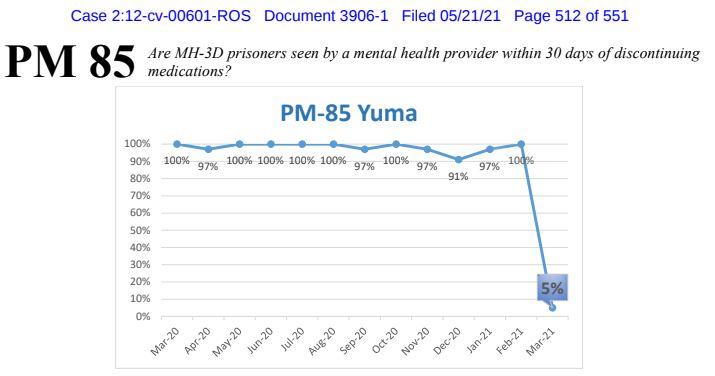 The same benchmark at the Tucson prison fell from 100% compliance to 6%. 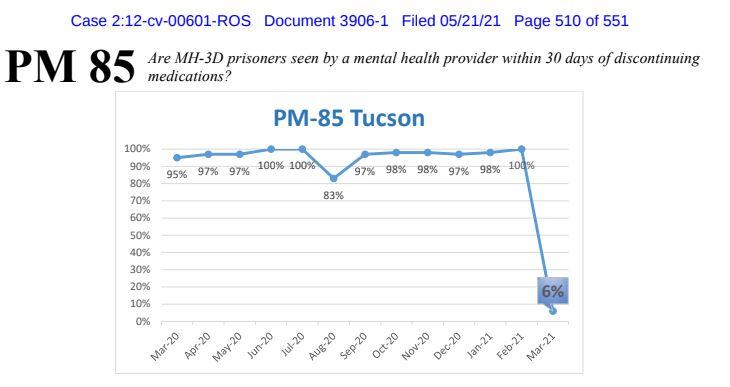 At the Perryville women’s prison, scores fell from passing for nine months to 0% compliance. 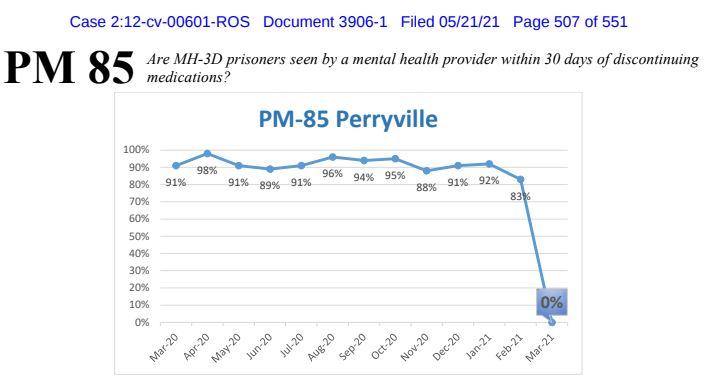 In response to the failing scores, the department wrote in a corrective action plan that Centurion was retraining employees to comply with the new mental health encounter guidelines.

“Moving forward, the mental health performance measures that require a clinical review because those time minimums were not met will be found non-compliant,” the department said, “unless there is a properly executed refusal and an encounter that clearly indicates that the patient refused to engage with mental health staff or refused to continue the encounter.”

Fathi says the significant drop in compliance scores reveals the true conditions in which incarcerated patients are forced to live.

“It really shows in a very concrete and visible way, just how pervasive drive-by mental health encounters are in the Arizona prison system,” Fathi said.