'Cheetos Fingers': What One Elections Expert Saw At The Arizona Senate's Audit 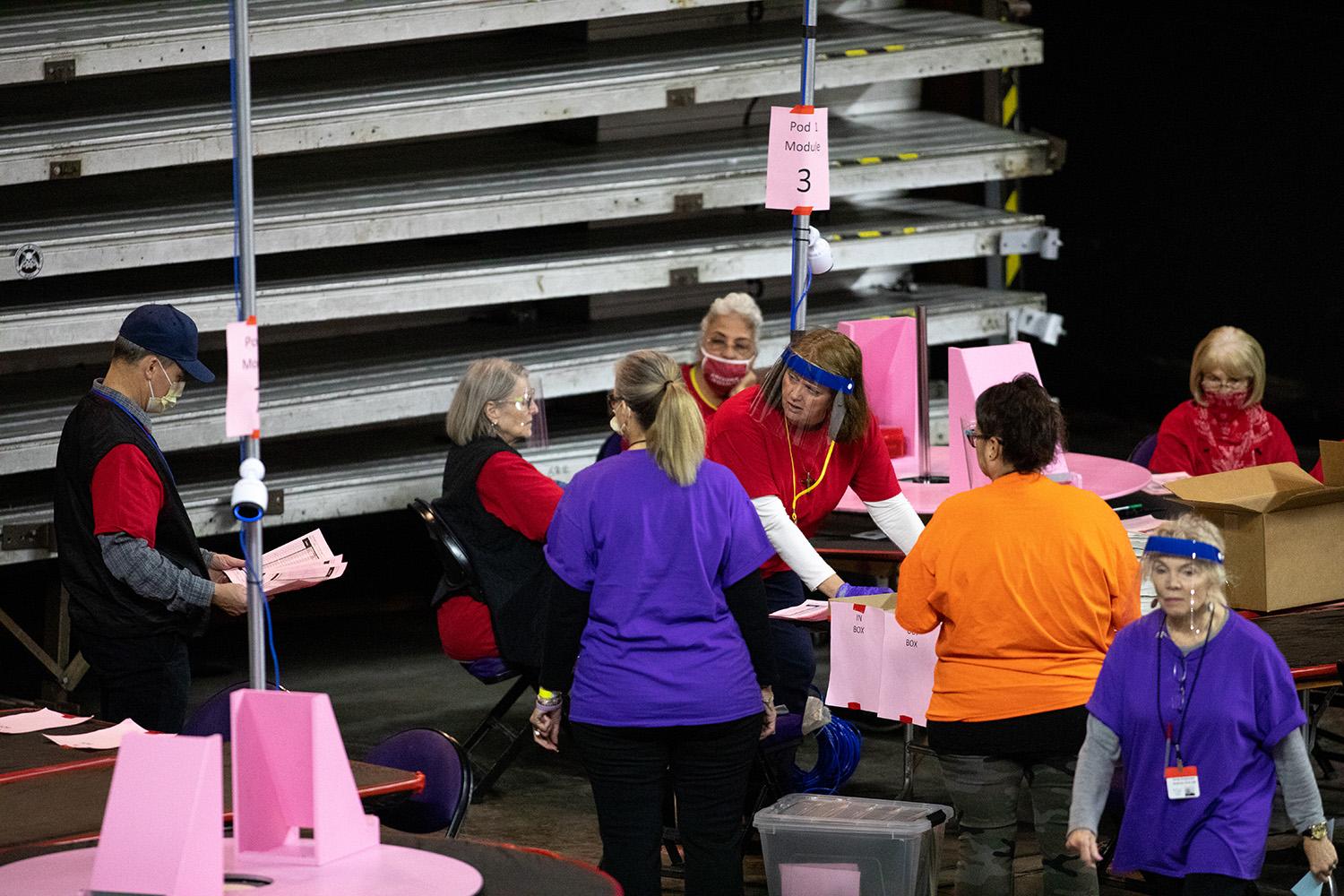 Courtney Pedroza/Pool
Contractors working for Cyber Ninjas, who was hired by the Arizona Senate, examine and recount ballots from the 2020 general election at Veterans Memorial Coliseum on May 8, 2021, in Phoenix, Arizona.

LAUREN GILGER: The Arizona Senate’s audit of the 2020 presidential election in Maricopa County, which Joe Biden won, [continued Monday] after a brief interlude while high school graduations took over the Veteran’s Memorial Coliseum last week. The audit has become a rallying cry for those who believe — without evidence — that the election was somehow stolen from former President [Donald] Trump. And other states are starting to copy it. Jennifer Morrell is a partner at the Elections Group. She’s a former election official and national expert on post-election audits who was among Arizona Secretary of State Katie Hobbs’s official court-mandated observers at the audit. She [joined The Show] after penning an opinion piece for the Washington Post about what she saw there.

JENNIFER MORRELL: Ordinarily, we see audits ran by election professionals with years of knowledge and experience, meaning they've got the process down, but also they're performing the audit in accordance with the laws and policies of the state and the jurisdiction. So it's pretty cut and dry what needs to happen. What I saw here was a process that was being improvised, procedures that were being improvised, that were changing daily. And that's, that's so concerning. It's just so antithesis in some ways to what you see in a well-run election office like you have in Maricopa County.

GILGER: Let me ask you for an example or two. Like, explain a little bit about what you saw that was so concerning.

MORRELL: Sure. So we'll start with the actual handling of ballots themselves. In an election office, whether we're talking about counting the ballots, initially performing a recount, doing some sort of audit, there's always some sort of ballot accounting — meaning we want to have tight controls around the ballot, we want to know how many are in our possession when we're counting them, whether that means we have a stack of 10 or a of 100 or whatever that number is. That didn't happen at all. There were other things such as chain of custody or we had some concern about what was being recorded, were those batches being identified. And they did come up with a process, but it wasn't a process that would be familiar to election officials — meaning it was missing some information. And I just chalk that up to a rookie mistake. This is a group that clearly did not have a background in elections or background in auditing or any real experience with that.

GILGER: I want to talk about some of the things that you noticed in observing this audit that that the auditors themselves seemed to think were very concerning or irregular, but that from your point of view, seemed very normal. The cheese dust comes to mind here. Explain this for us.

MORRELL: Yeah. So I wasn't allowed to speak with anybody or to ask any questions, so I really had to just rely on listening. And that was one of the conversations, one of several I overheard that both was alarming and also made me smile just a little bit, where we had folks examining a ballot, and they saw what, what they called "Cheeto fingers," a stain, some sort of food stain on the ballot itself. And somebody said, "I think we need to set this aside," you know, "This is suspicious. Why would somebody come into the polling location with cheese powder on their fingers?" And they flagged it and set it aside. And, you know, anybody that's ran elections really for any period of time will tell you there are all these sort of human idiosyncrasies that we see — food stains and lots of other stains that I won't mention — on ballots all the time, whether they're marked and cast in someone's home or whether they come into a polling location.

GILGER: So you wrote that when you'd bring up, you know, obvious-to-you problems with their methodology, they would actually make adjustments, which sounds promising, except for that you can't just, you know, change your methodology midstream.

MORRELL: That's right. So we would identify things. And from day one, as those were being identified, I mean, those ballots were still continuing to be counted and examined. And yet we would see each day some change, whether it was stopping the process, adding a new procedure. They discovered about a week in, they were having these counters, as they called them, count, I guess is the word because, you know, the ballots are spinning past them on these lazy Susan wheels, and they're supposed to look up and in just a few seconds mark down two races, but they were doing these in, presumably, in stacks of 100. And they found, about a week into it, that it was challenging. Humans are terrible at counting. They're terrible at tedious, repetitive tasks. So they would let some tables move that down to 50 or fewer. So those sorts of things, it was just like every day changing. They might use lights, they might not use lights. They were using overhead production of the ballot. then that stopped.

GILGER: So Senate President Karen Fann has said that the, the idea here, right, is to reinstill confidence in voters who think that there were some major issues with the election. That this was, you know, rigged to steal the vote from former President Trump. What do you see as the most likely outcome of this audit based on what you observed? Like, when this is done, what do you expect the auditors to say?

MORRELL: Yeah, well, it's, it's clear they're going to find issues with the outcome of the election just based on flaws of the process that they've created. The fact that they allow for this tolerance, I guess, of this discrepancy in what they're counting, this recount. But I'm really glad you asked that question, because that statement by President Fann has really struck me. And it's so disappointing, because I think if that really was the intent — if the intent was to instill confidence — then the thing that should have been done, the thing that could have been done, was for herself and for any of her fellow colleagues, legislators, that wanted to instill confidence — they should went down to Maricopa and they should have like, walked through the process. They should have schooled themselves on the safeguards that were in place, on the security protocol that was there, on all of the things that they did to, in fact, conduct an election that will secure, an election that was accurate, an election that was trustworthy. Then they could have turned to those constituents and reinforced that message.

GILGER: Final question for you, Jennifer. So now we're seeing other states call for similar audits as we see here in Arizona. What are your concerns about that?

MORRELL: Yeah. My concerns are that we've suddenly made it OK to take away what has been a statutory process overseen by professionals who raise their hand and take an oath to conduct that process with accuracy and in accordance with the laws of their state and in accordance with the Constitution. And now suddenly handing that off to a group with no expertise, with political bias, who get to make up their own procedures —not, not the procedures that the law requires. I think it's a terrible precedent. I think it's a dangerous precedent. I think it's reckless, and it's just, it's unprecedented.

GILGER: All right. That is Jennifer Morrell, a former local election official and a national expert on post-election audits. She's also a partner at the Elections Group. Jennifer, thank you so much for coming on the show. I appreciate you taking the time.

MORRELL: Yeah. Thanks so much for inviting me.