When she arrived at the Perryville state prison, Alexandria Hunt noticed the facility was home to more than just incarcerated women.

“At first there were little baby field mice in the dorms,” which Hunt said the women would catch and release into the nearby farmland of rural Goodyear, Arizona.

“But then it started getting to the point where there were gigantic rats everywhere,” she said, “especially in the kitchens.”

Hunt worked in several different kitchens at the prison, including the main kitchen for the entire complex.

By the time she completed her sentence five years later, Hunt said the prison was beset by a massive infestation.

“It’s the same issues in every unit, but pests are the main problem,” she said. “We were finding rat feces in the food, the storage areas, and all over the trays. It was really gross.”

Inspection reports from Arizona Department of Corrections monitors, Arizona Department of Health Services employees, and private contractors reveal many of the kitchens and storage warehouses in the state’s prisons are infested with pests. Twelve months of inspection reports conducted at all 16 state prisons in 2020, provided to KJZZ through a records request, detail filthy conditions, broken equipment, and frequent use of expired food.

The records show that while almost all of the facilities were consistently found to have critical violations, the prison kitchens were given “satisfactory” ratings by oversight agencies, and allowed to continue serving food to incarcerated people.

In response to questions about the reports, Department of Corrections spokesperson Bill Lamoreaux said the issues noted by the inspectors were addressed.

“As with any highly utilized industrial-sized kitchens, equipment from time to time will need servicing,” Lamoreaux said. “In addition, we regularly clean and sanitize kitchen surfaces and food prep areas multiple times a day and the Department of Health routinely inspects ADCRR kitchens and surfaces at each of our complexes.”

Representatives for the Arizona Department of Health, and Trinity Services Group, the company the Department of Corrections contracts with to conduct all food and concession operations in state prisons, did not respond to requests for comment.

“Rodent issue in the kitchen,” reads one report from Perryville. The inspector notes “large sticky traps” were more effective than smaller traps, “which were ineffective for the bigger rats.”

Another memo from a Perryville kitchen describes how prisoners had to be “retrained” to clean bird feathers from ceiling vents. 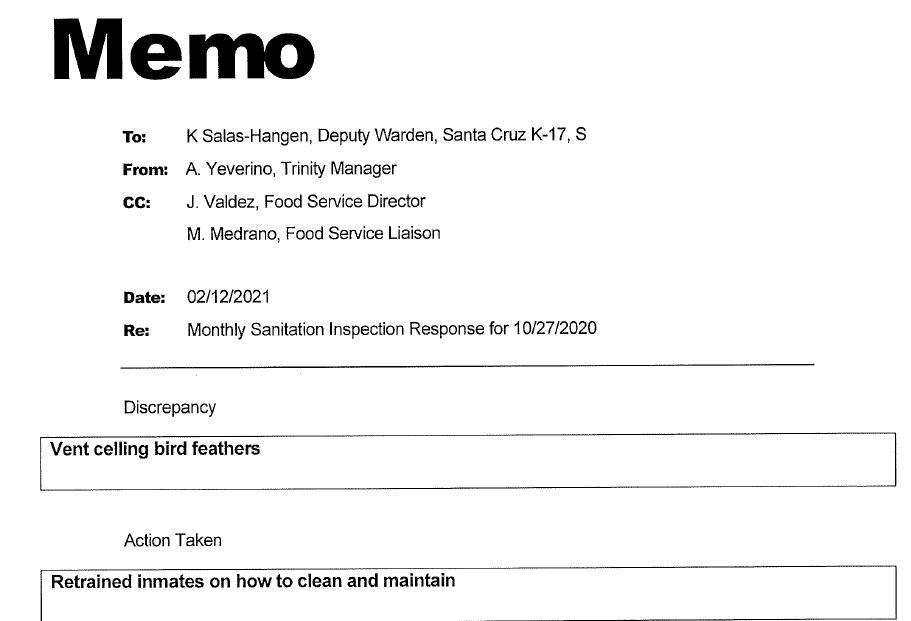 Roach infestations were noted in more than half of the prison kitchens reviewed. At the Eyman state prison, an inspector noted “hot holding cabinets” were out of “out of service for being infested with cockroaches.”

“Pest infestation still present in main kitchen at serving lines, beverage stations, and dish room,” an inspector wrote. “The problem has not been resolved at the time of inspection.” 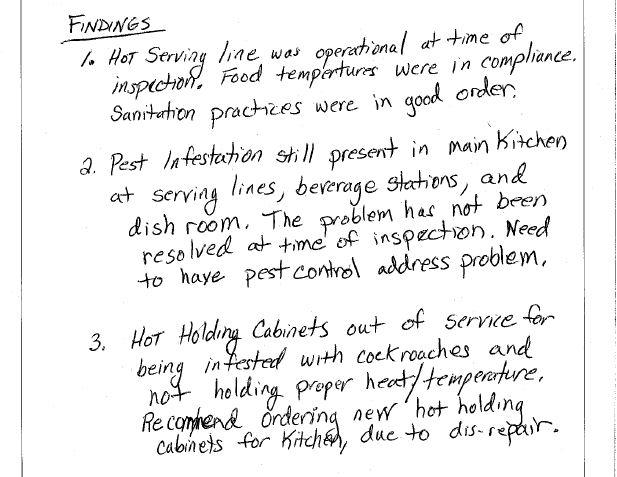 At the Lewis prison, an inspector made note of a roach problem twice a month for nearly an entire year. By September 2020, the inspector wrote: "Roaches starting to get bad." In every instance, the kitchen was given a “satisfactory” rating. 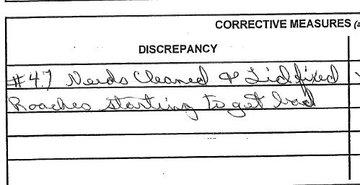 Greg Goodman was incarcerated in several Arizona prisons over 10 years. He says many of the facilities at the state prison in Florence were infested with pests.

“When we were eating in the chow hall, you could hear the rodents in the wall,” he said. “And you would see the rat droppings everywhere.”

Department of Correction spokesman Lamoreaux said the department contracts with pest control services twice monthly to monitor and treat the kitchens. “On the occasions in which it is believed that additional pest control visits are needed, the contractor is called out for off-cycle treatments,” he said.

In addition to pests contaminating the food, Hunt said she was repeatedly ordered to cook with expired food, and instructed to put false expiration dates on ingredients in order to deceive kitchen inspectors.

“They were asking us to violate very basic food service guidelines,” Hunt said. “We would have to change the plastic wrap on the expired food, put on a new label, and then write a new date on it. That was a very common practice.” 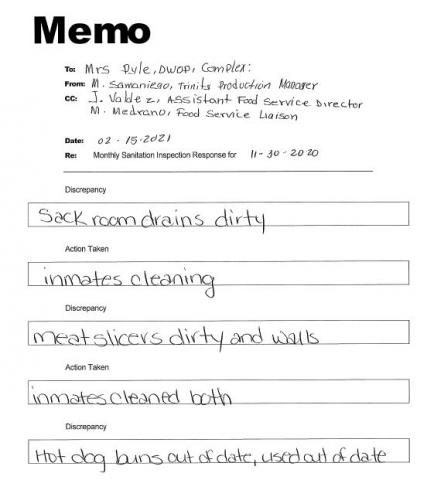 Hunt said one experience preparing breakfast food stayed with her throughout her time at Perryville.

“We were making what they called 'French toast bake',” Hunt said. “You rip up a bunch of bread, dump water and a ton of cinnamon on it, and then you put it in the oven.”

But Hunt said all of the bread in the kitchen was moldy. “There were so many foods like that, where they just mix a bunch of things together and bake it until it’s dark, so you could never tell if the ingredients were moldy or spoiled.”

When Hunt complained, she said Trinity and prison employees insisted she use the bread, suggesting she just scrape the mold off. “They told me that if I threw the bread away, I would get a disciplinary ticket for destruction of state property and I would have to pay restitution for double the cost of the bread.”

Hunt said after the incident, she ate only food from the prison commissary for the last seven months of her incarceration, a diet that she estimates cost about $450 a month.

“I was worried that I was going to get sick,” she said of avoiding the kitchen food. “But then my family had to take on a whole additional financial burden.”

The inspection reports document multiple instances in the prisons where dishwashing machines remained broken for extended periods of time. 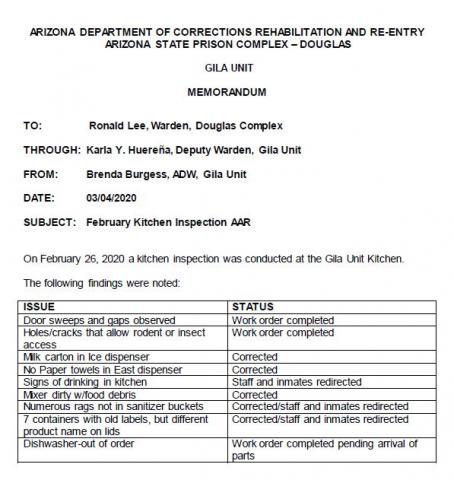 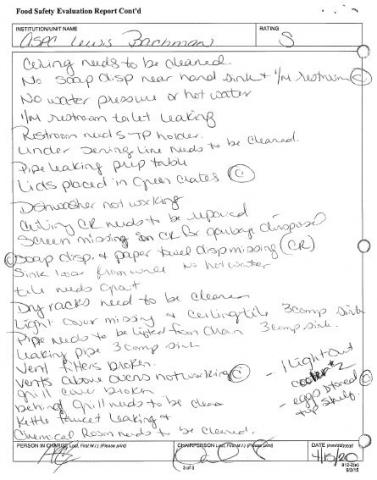 Goodman said the sanitary conditions in the prisons were terrible. “The dishwashing machines were always broken,” he said. “So the kitchen workers had to wash the trays by hand, but they were always covered in filth.”

He said the prisons would also wash and reuse disposable plastic cups.

“Once, I was issued a drinking cup that a previous guy had used as a spit cup for chewing tobacco,” Goodman said. “It was disgusting. The bottom was yellow and there was actually dried chewing tobacco still in it.”

An inspection of the Winslow prison found the kitchen to be “extremely dirty.”

“Fly's very bad,” the report said. “Cooler dirty and smelled of bad product and hasn’t been cleaned in months.” 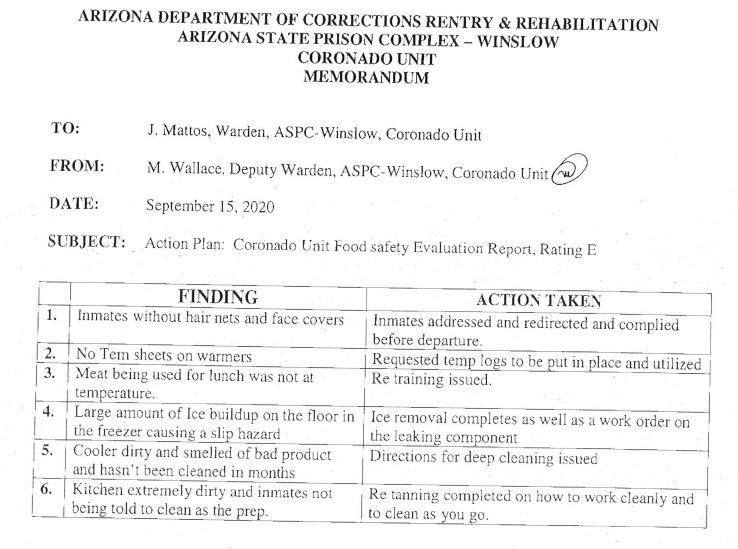 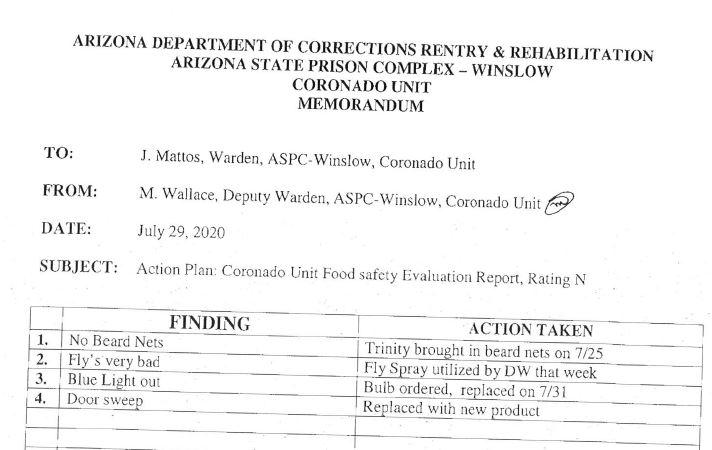 Another inspection at Winslow found “blood all over” the floor of a cooler.

No Soap Or Toilet Paper In Employee Bathrooms

People incarcerated in Arizona prisons have historically struggled to access sanitary products like toilet paper, pads and tampons. Throughout the COVID-19 pandemic, prisoners and staff have complained of a lack of cleaning supplies. The inspection records show prison kitchens were no exception to the shortage of cleaning and sanitation products. Inspection reports from nearly every facility found kitchen employee bathrooms without soap, toilet paper, or paper towels. One report reads: "Restroom was so dirty to the point where it should have been closed for no use at all (this is an ongoing issue)" 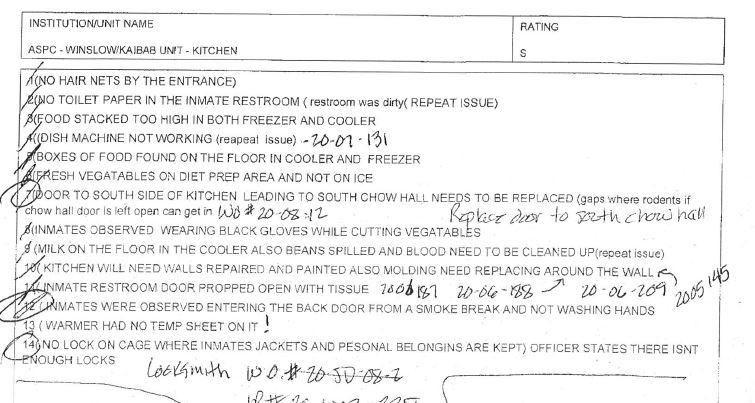 In an inspection of the Lewis prison kitchen, an Arizona Department of Health Services employee recommended the prison “fix soap dispenser … so employees can wash hands." The kitchen was given a satisfactory rating.

Incarcerated people have been speaking out about the poor quality of the food in Arizona prisons for several years. In March, more than 100 prisoners at the state prison in Florence held a hunger strike in protest of what they called inedible food and unsanitary conditions.

In November 2020, incarcerated people who work in the kitchens at the Eyman, Lewis and Yuma state prisons claimed they were forced to serve expired meat to their fellow inmates, resulting in foodborne illnesses.

Jewish prisoners in Arizona state prisons recently sued the Department of Corrections over a change in the kosher meal program after the department switched to a “plant-based common fare meal” in August 2020.

Hunt said all of the kitchen inspections were announced well in advance to give the workers time to clean and swap out the food labels. “And if they did show up without notice, the [correctional officers] would hold the inspectors at the gate to give us time to hide stuff,” she said.

Several of the reports note that the kitchen workers had been alerted in advance of the inspection. "Waiting outside for 10 mins to get into the kitchen,” an inspector wrote. “Inmates were cleaning."

Hunt said despite the unsanitary conditions, the kitchens would nearly always receive a “satisfactory” rating.

“I mean they would give us a ‘satisfactory’ even if they found dead rats,” Hunt said. “It was like there was a camaraderie between the inspectors and the Trinity employees and the prison employees. So even if the kitchen was a mess, they’d let us get away with it.”

Hunt said she believes the low-quality food and the unsanitary conditions are having a serious impact on the physical and mental health of incarcerated people. But she says there is a lack of accountability from the prison administrators.

“They act like you’re being unreasonable for wanting a clean eating environment,” she said. “But I know they wouldn’t accept rats and roaches and expired, moldy food in their own homes.”