Senate Republican leaders didn’t follow through with a threat to subpoena multiple Maricopa County officials on Monday, but may yet set the stage for a new legal battle this week.

Kory Langhofer, an attorney for the Senate, said over the weekend he would issue subpoenas on Monday for all five county supervisors and possibly Maricopa County Sheriff Paul Penzone. The subpoenas would demand the supervisors and other officials appear before the Senate to explain why the county won’t surrender routers and passwords GOP senators claim are essential to completing the Senate’s review of the county’s 2020 general election.

No such subpoenas were issued as of close of business Monday. However, Langhofer told KJZZ they may yet be sent Tuesday.

Subpoenas of the supervisors are nothing new for the Senate, which spent months in court fighting with the board demanding access to voting machines, election equipment and the nearly 2.1 million ballots cast last November.

Their new target, Penzone, has told Maricopa County supervisors they shouldn’t turn over the county’s routers because it would result in “horrendous consequences” for law enforcement.

Ken Bennett, a liaison for the Senate’s election review, said the routers are essential to determine if the county’s election equipment was ever connected to the internet — a concern already debunked by two independent audits performed on behalf of the Maricopa County supervisors.

“The routers that were in the building at [county election headquarters], when the election was being conducted, would have logs identifying whether anything related to the election was connected to those routers, and whether traffic passed to or from the election management system over the internet, which is not supposed to happen,” Bennett said.

Senate President Karen Fann, a Prescott Republican who ordered the election review and appointed Bennett as her liaison, told Capitol Media Services that the county’s reticence to produce the routers makes her desire it even more.

"What are they hiding?" she asked, saying they may not have the confidence in the results they claim.

Those results gave Democrat Joe Biden 45,109 more votes in the county than Republican Donald Trump. And that edge was enough for Biden to defeat Trump by 10,457 votes statewide.

The demand for the routers has angered Penzone and caused the supervisors to balk.

"We are talking about confidential, sensitive and highly classified law enforcement data and equipment that will be permanently compromised," the sheriff said. "The current course is mind-numbingly reckless and irresponsible."

Penzone provided no details on how review of the computer traffic from computers used by the Sheriff's Office would compromise any investigation or the safety of any officer.

But he hinted he would be willing to provide specifics if asked — or subpoenaed.

"It is my hope that additional education of the exposure of this data and equipment will compel the Senate Republican caucus to take a more responsible course of action," he wrote.

Jack Sellers, who chairs the board of supervisors, said there's a separate problem. 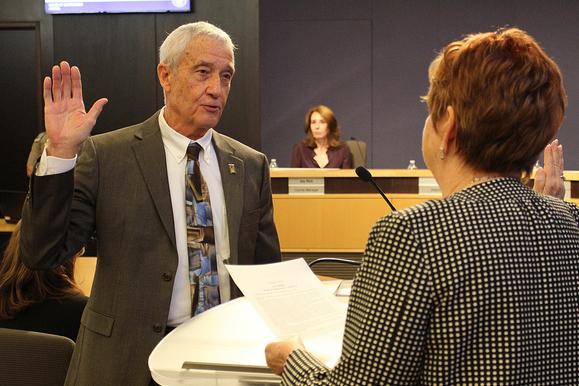 "We have learned providing the physical routers will cripple county operations and cost as much as $6 million if we must replace the routers while the Cyber Ninjas have them," he said.

Sellers said providing "virtual images" of the routers, while dealing with the technical issue of removing them, is not more acceptable because that still leaves the security issues cited by Penzone.

Separately, the Senate has also demanded a list of passwords to some of the counting equipment that was located at polling centers. County officials have said they don't have those in their possession because they belong to Dominion Voting Systems, from whom the county leases the equipment.

The county already has surrendered ballots, as well as the tallying machines and other election equipment. All of that has wound up at the Veterans Memorial Coliseum at the state fairgrounds in Phoenix, where the private firm Cyber Ninjas is conducting the review. Election experts have criticized the Florida-based cybersecurity company Fann hired to lead the audit and recount as unqualified to review the 2020 election.

If new subpoenas are issued, they would set a date and time for county officials to appear before a Senate committee. If the senators don’t then accept the county’s explanation, and the county won’t budge, the standoff would likely send the case back to court, where a judge would have to decide whether prior rulings requiring the county to surrender the ballots and election equipment applies to what senators now insist is necessary.

In February, Maricopa County Superior Court Judge Timothy Thomason swatted down a series of arguments by county officials who argued the lawmakers have no legal basis for the subpoena they issued. And Thomason brushed aside claims by county officials that the real purpose of the subpoena is not to use the information gathered to review existing election laws but instead to try to overturn the results of the 2020 election.

"Granted, Fann has made public comments about concerns of 'many voters' regarding the accuracy of the presidential election and the need to 'audit' the election," he wrote.

"The court is not in a position to determine if the 'real' purpose of the subpoenas is to try to 'overturn' the result of the election," Thomasson wrote, later adding that such a move "would clearly be futile" given that the Electoral College has voted, Congress has confirmed the results, and President Biden has been sworn in.

Even if the election could somehow be challenged, the judge wrote, "there is still a perfectly valid legislative purpose for the subpoenas," meaning the oversight that the legislature has of elections.