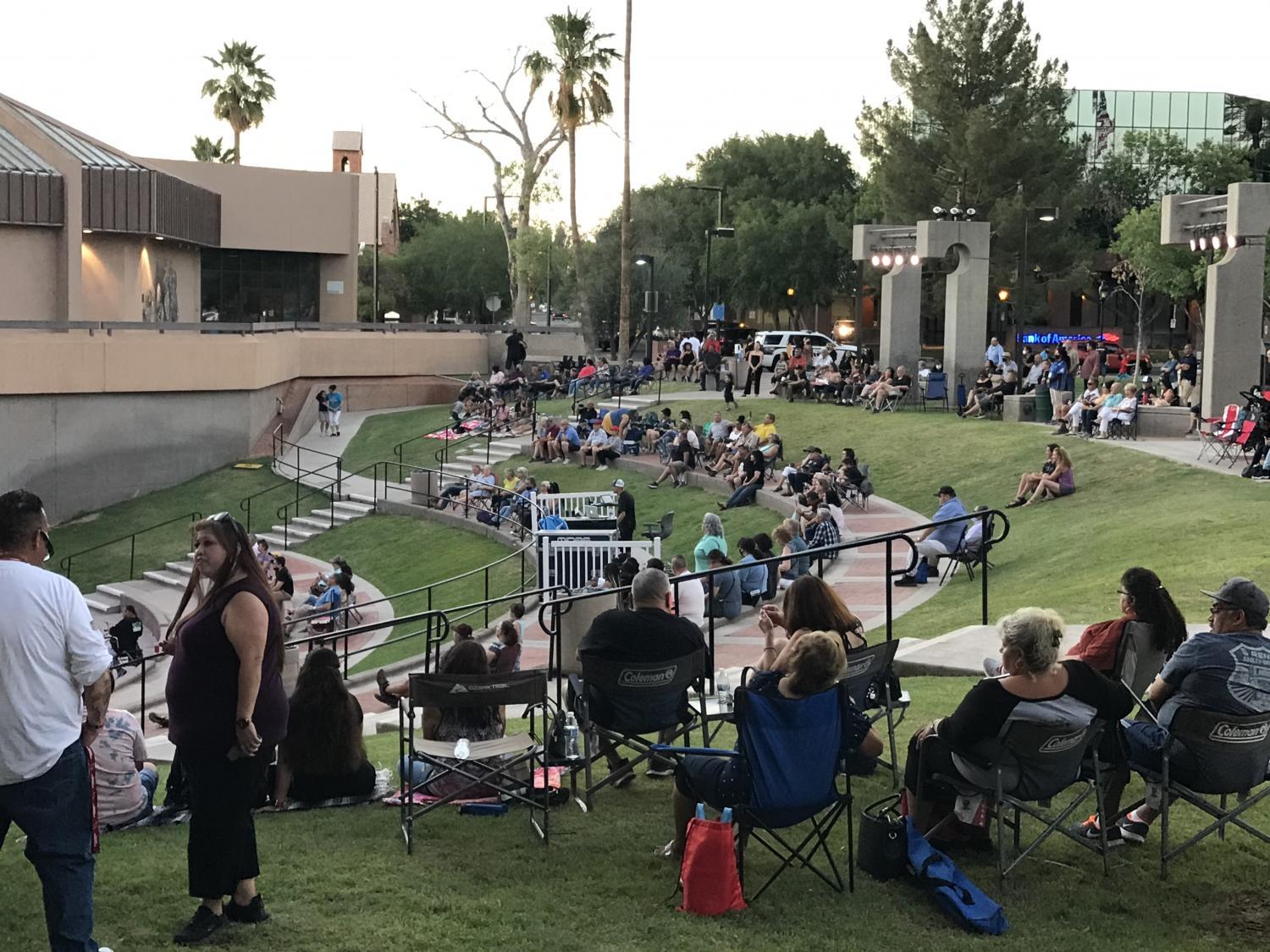 Music in the park, a re-telling of “Alice in Wonderland,” poetry, art, literature, live performances.

The artists are back, as millions of Arizonans have been vaccinated against COVID-19.

And they’re happy to see your face — even if it’s still masked.

Sounds from the band Barrio Latino rocked the stage last Friday at the amphitheater in downtown Glendale as part of Live! @ Murphy Park, running Thursdays through Sundays this month.

This year, the kickoff of the May-long event aimed to promote both the music and the business community who are welcoming back patrons en masse.

Heidi Burriga, the city’s special events administrator said, “Music brings people together, so we had these wooden guitars made by a local business in the downtown area, C+D Designs. They cut them out for us and we distributed them to all the businesses. They decorated them as to either what music means to them, to their business or just to help promote their business.” 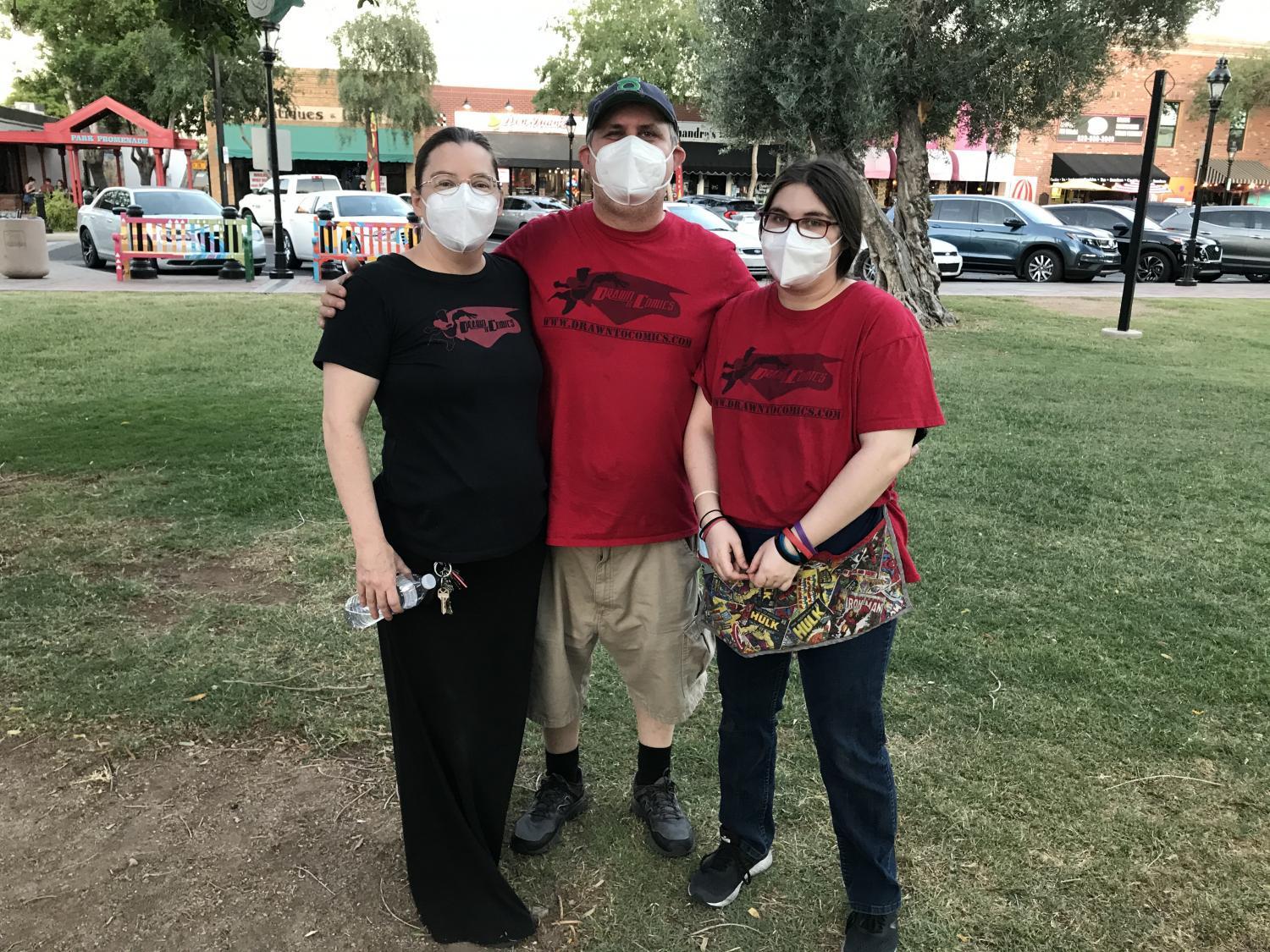 Tom Maxedon/KJZZ
The Brown family owns Drawn to Comics in downtown Glendale. They have a guitar cutout hanging in the trees surrounding Velma Teague Library. The guitars coincide with Live! @ Murphy Park featuring musicians Thursday-Sunday during May.

The art installation serves another function for those who can’t attend the musical performances. “It gets people out and about during the day, too. Whether it’s their lunch time visiting an establishment downtown, there still will be lights and sound coming from the trees as well as the visual of the guitars,” said Burriga.

The guitar cutouts were hung with care in the trees surrounding the Velma Teague Library.

“Well, that one right there is the best one,” laughed Susan Brown who painted the cutout featuring comic book hero Spiderman.

She and husband Ken Brown own Drawn to Comics in Glendale, which caters to those who are just discovering them or those who are veteran enthusiasts of the art form. They showed up with their daughter to have some outdoor fun and listen to the music.

The heart-pounding retelling of “Alice in Wonderland” opens at Peoria Center for the Performing Arts in June. 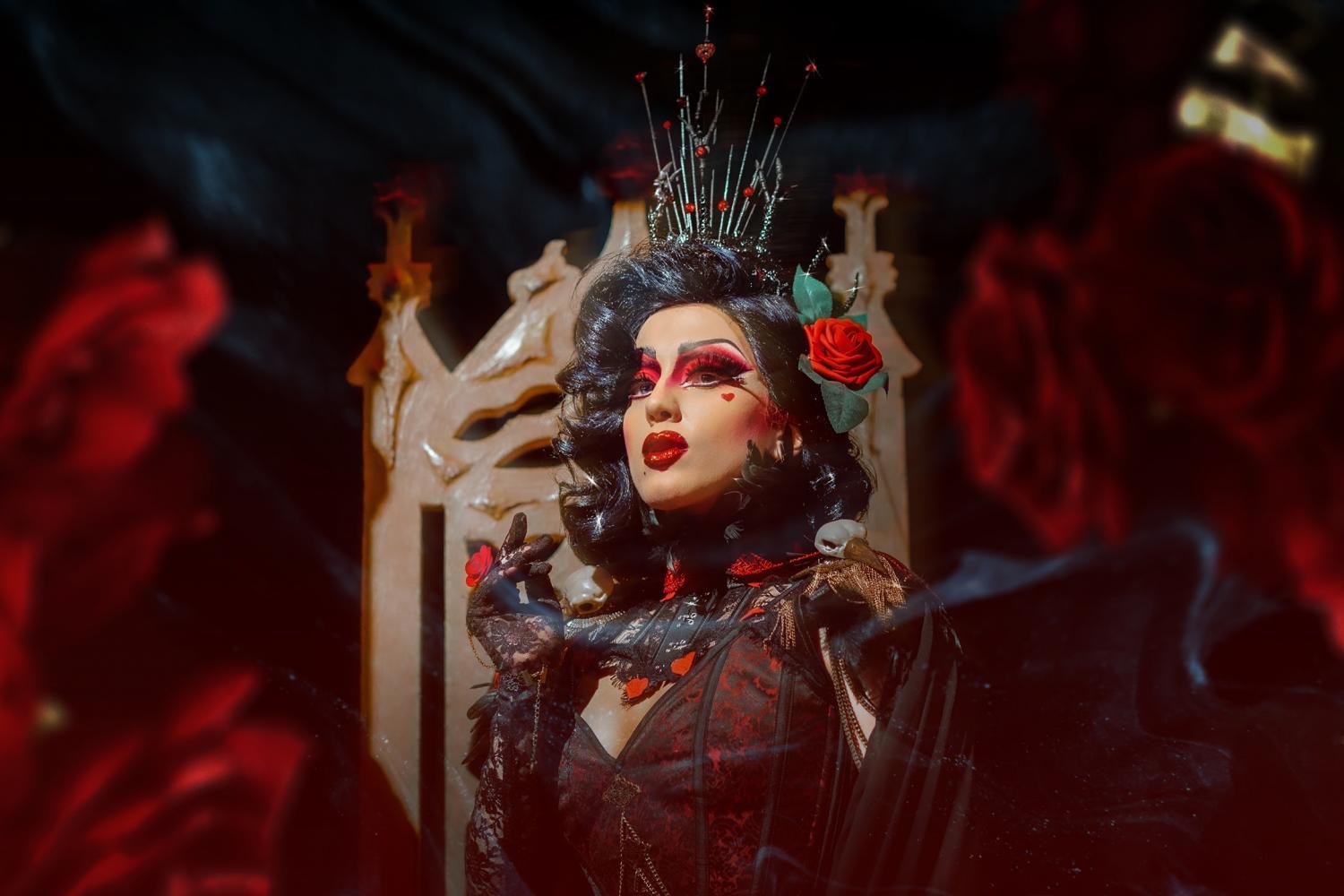 Josiah Duka Photography/2020
“CURIOUSER & CURIOUSER TOO” is a heart-pounding retelling of “Alice in Wonderland” produced by TheatreWorks. It's an update from the 2020 production and opens at Peoria Center for the Performing Arts in June.

Cate Hinkle, managing director of TheatreWorks which created the production, said the concept is not unlike a haunted house, where people move through spaces.

“That’s exactly the idea, except now you’re experiencing a narrative as part of it,” she said. “You get different performances. It’s a much more theatrical experience than a haunted house would be, but the idea is very similar.”

Hinkle said audiences take on the role of Alice while gathering clues from one room to the next in a 6,500-square-foot, multi-sensory theatrical experience, with a lot of walking.

“So, they’re walking down the rabbit hole. They get to participate in the tea party. They get to go to all these different rooms to experience these different areas of Wonderland. In the caterpillar den, it’s sort of a nightclub experience, where you get to sit and enjoy a drink and listen to performances,” she said.

Patrons are required to wear face masks, have their temperatures taken upon arrival, and a thorough deep cleaning takes place prior to each performance. 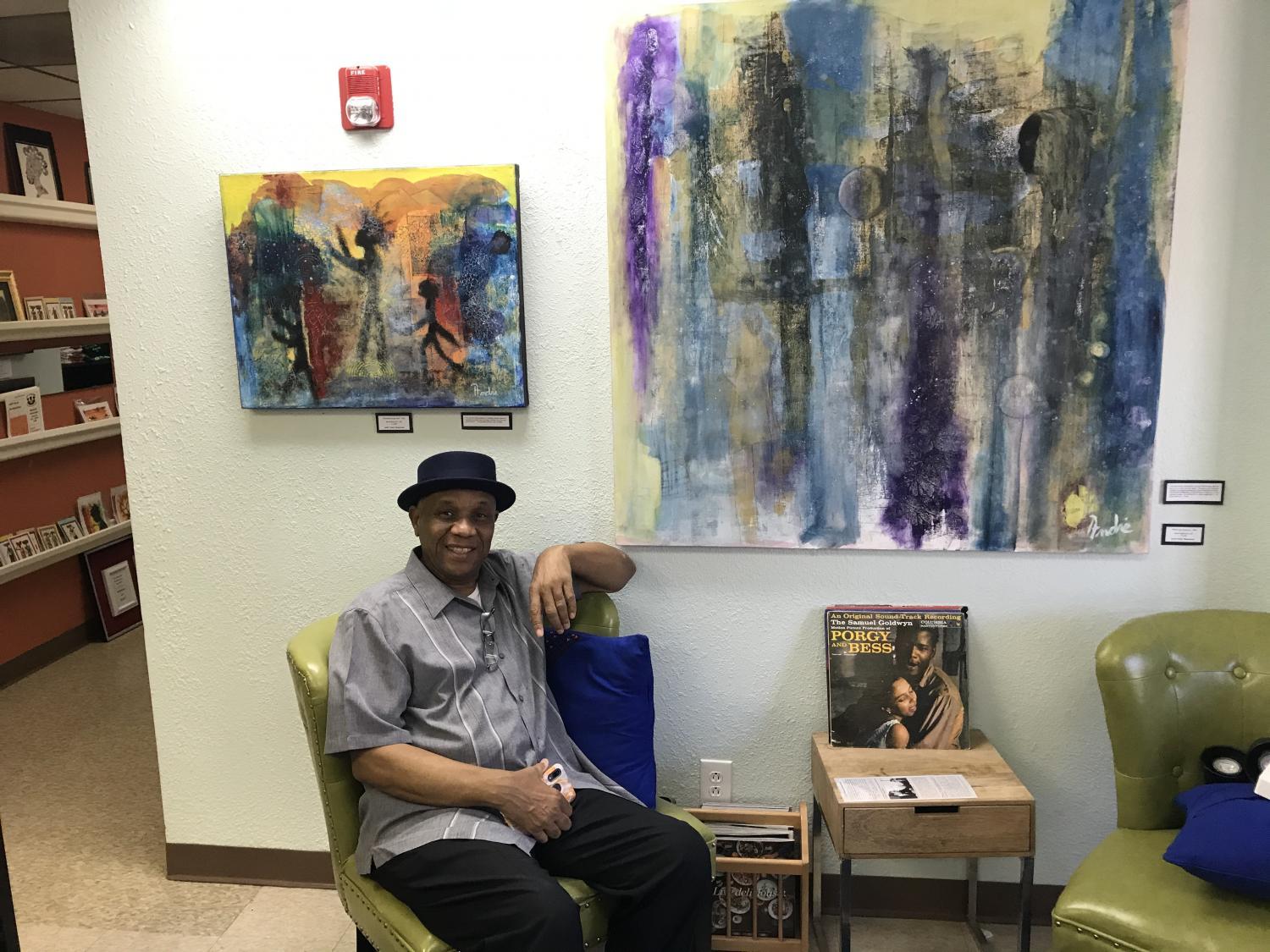 Tom Maxedon/KJZZ
Jackie Andre Muhammad is a poet, musician and painter. His exhibit, “Introspective To Unknown Ancestors,” opened recently at Grassrootz Books and Juice Bar in downtown Phoenix. The large painting is entitled, "What's Your Question?"

Small businesses hit hard by the pandemic are reopening to the public. That includes Grassrootz Books and Juice Bar, located inside AFRI-Soul Market, a Black-owned co-op in downtown Phoenix.

“I think this is the biggest order that we got,” said store Manager Kylie Chamblee, referring to a newly unpacked box of titles. “We have a lot of people starting to request specific books for the store.” 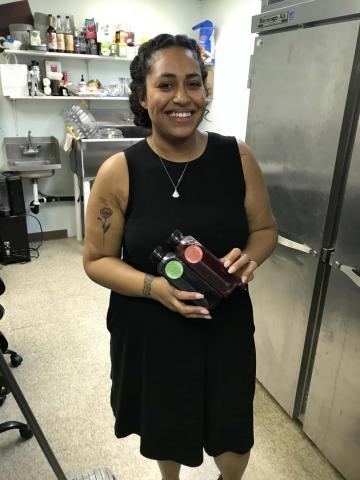 Grassrootz specializes in books by Black authors and also serves as a community space that features art and entertainment.

Last Friday, the store hosted an exhibition with painter, musician and poet, Jackie Andre Muhammad, a longtime Phoenix resident. It was organized by Michelle Ivette Ponce who used to run a gallery of contemporary and Indigenous art formerly located at Roosevelt and Fifth Streets.

Muhammad’s artwork is on display through June and the marquee piece “What’s your question?” is featured on the wall just inside the front door.

He used to have his own custom art framing shop and said he’s painted about 400 works over the last decade.

His current exhibit is about honoring the past and is entitled, “Introspective To Unknown Ancestors.”

At the opening, Muhammad asked in reference to the exhibit title, “How far back do you go? Do I go? And the best of the ancient ancestors — we’re the better part of them because we made it. We’re here,” indicating one can draw a direct thread back to those ancestors through art.

“Right. So, the whole thing is, can you get behind the canvas?” he asked.

The evening was a nice reunion for Muhammad and other patrons who turned out. “Your dad is Paul Underwood?” asked Muhammad.

Muhammad stretched out his arm in a typical gesture for referring to kids. “I met you when you were like that.”

It’s the type of reunion we’re all looking for these days. 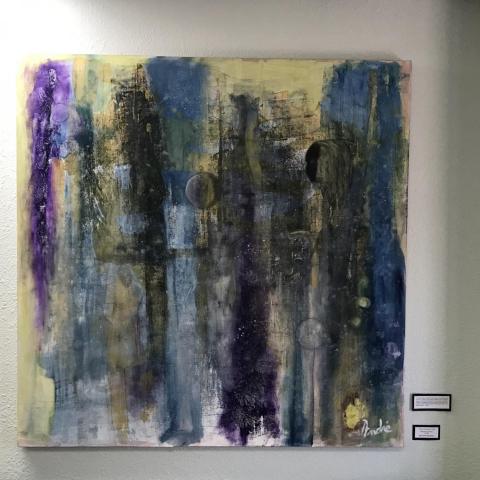 Tom Maxedon/KJZZ
"What's Your Question?" by poet, musician, painter and longtime Phoenix resident Jackie Andre Muhammad is on display at Grassrootz Books and Juice Bar through June. It's part of his exhibit, “Introspective To Unknown Ancestors.” 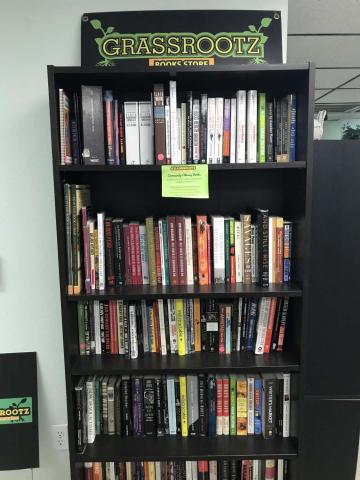