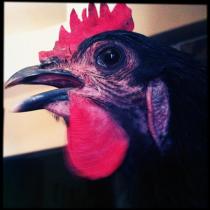 (Photo courtesy of Joe and Sheila Papay)
Balloon is a large jersey giant belonging to the Papay family in Chandler.

Homeowners who want to raise chickens or get really fresh eggs would have that right under legislation moving through the Arizona Senate. Sen. David Farnsworth’s bill would override city ordinances, though cities could still enact limits. Noisy roosters would also be outlawed, but Farnsworth said even things like putting a chicken coop right next to the neighbor’s property should be a matter of personal rights.

But, Ken Strobeck of the League of Cities and Towns said when people buy homes in certain areas, they expect a certain level of behavior around them.

“So, if there are noises or smells or things that are not anticipated when they purchased in that neighborhood, then their property rights are being infringed on," said Strobeck.

Farnsworth said he thinks that problem can be handled through existing nuisance laws, but Strobeck worries the language of the measure, guaranteeing the right to own chickens might even negate those laws.