Phoenix 50 Years Ago: A Look Back 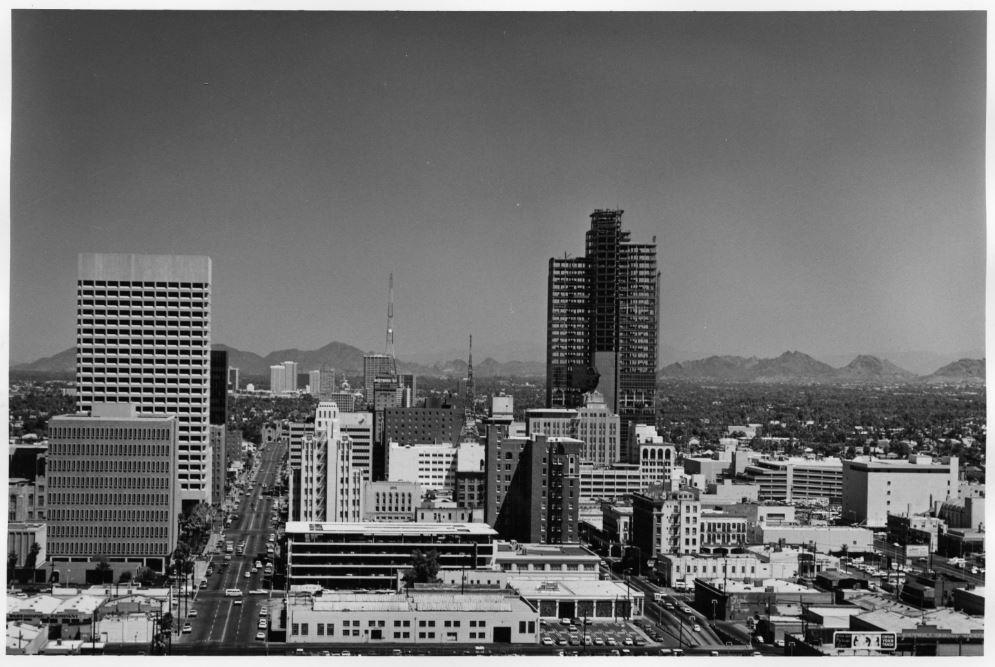 City of Phoenix
Downtown Phoenix, circa 1971.

In honor of the anniversary, take a look back at what Phoenix was like 50 years ago.

→ KJZZ Wasn't Always KJZZ. Here's How The Station Got Its Name 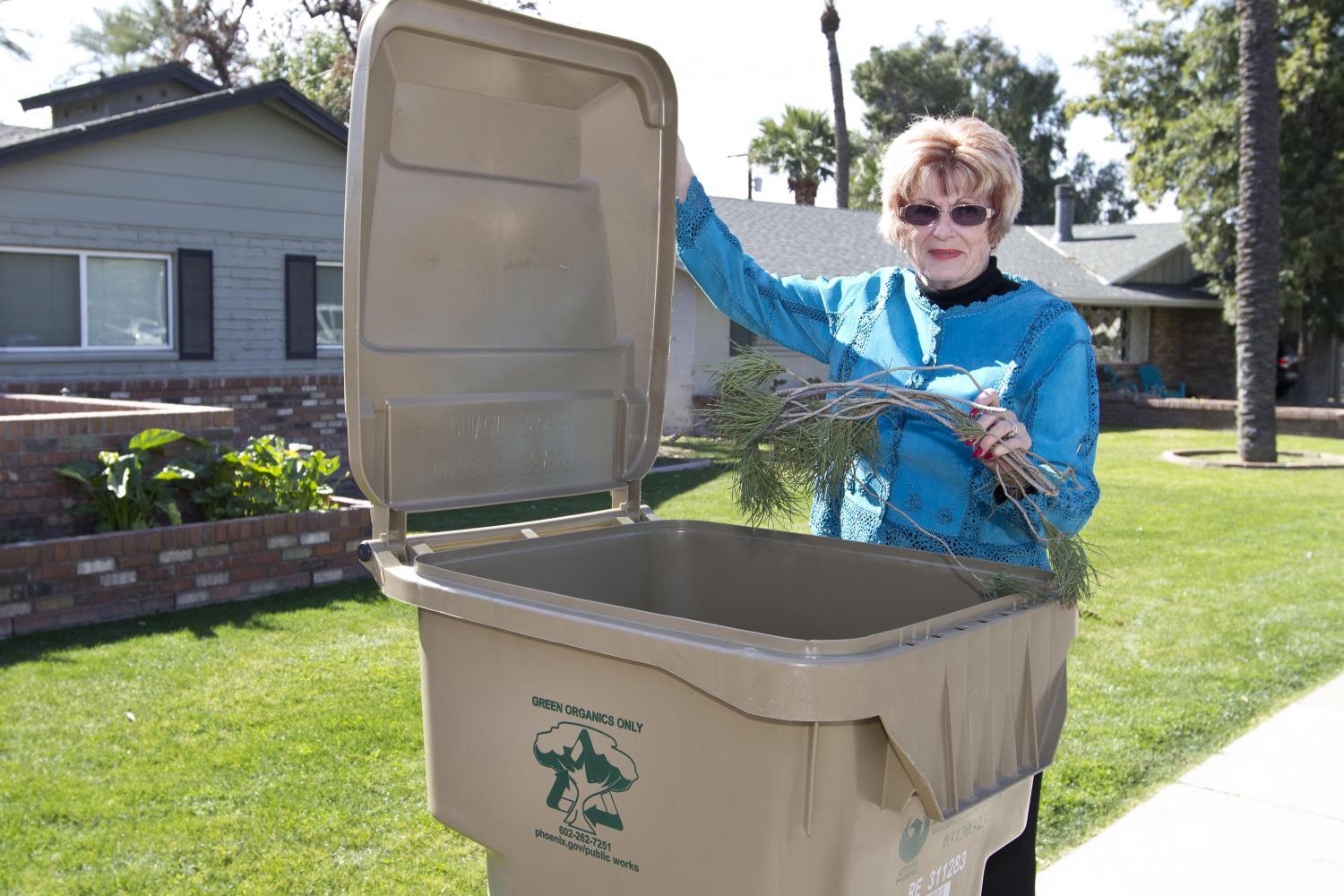 In the last 50 years, Phoenix has added 1 million residents. Thanks to annexation, the city’s land size has doubled and now covers more than 500 square miles. We talked with a former city councilwoman who arrived in Phoenix in 1971.

When Thelda Williams’ husband accepted a transfer to work at the JCPenney store at Phoenix’s Park Central Mall, she had no internet to search for photos.

“All I thought I’d see is sand dunes," she said. "I didn’t think there’d be all this vegetation."

The Omaha native recalls being fascinated with saguaros. Williams’ family moved to a house near 35th Avenue and Dunlap, considered far north in 1971. Her three kids played in a vegetable field, chasing rabbits and roadrunners. But a couple years later, the Williams family decided to move farther north. Why? Metrocenter Mall was being built and attracting more than shoppers. 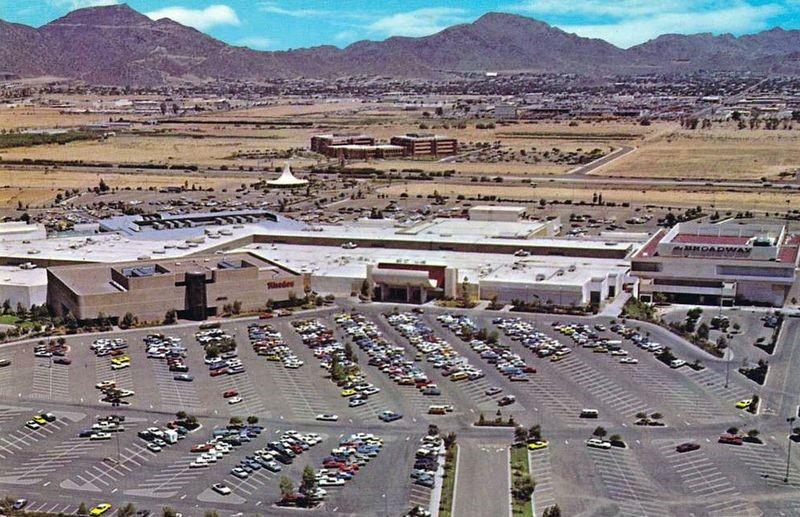 City of Phoenix
Metrocenter Mall at Interstate 17 and Dunlap Avenue in the early 1970s.

Still, the family joined many others who visited Arizona’s first two-story mall before it closed in 2020. Metrocenter was believed to be the first mall west of the Mississippi River with five department stores.

“The kids fell in love when they found out about the ice skating rink,” Williams said.

She would go on to serve Council District 1, which included Metrocenter Mall from 1989 — 1996 and 2008 — 2021. During her 20-year tenure, Williams supported Sky Harbor Airport’s expansion. She saw Terminals 1 and 2 close and participated in Terminal 4’s groundbreaking in 1989.

“And we didn’t think we’d ever outgrow that,” she said. 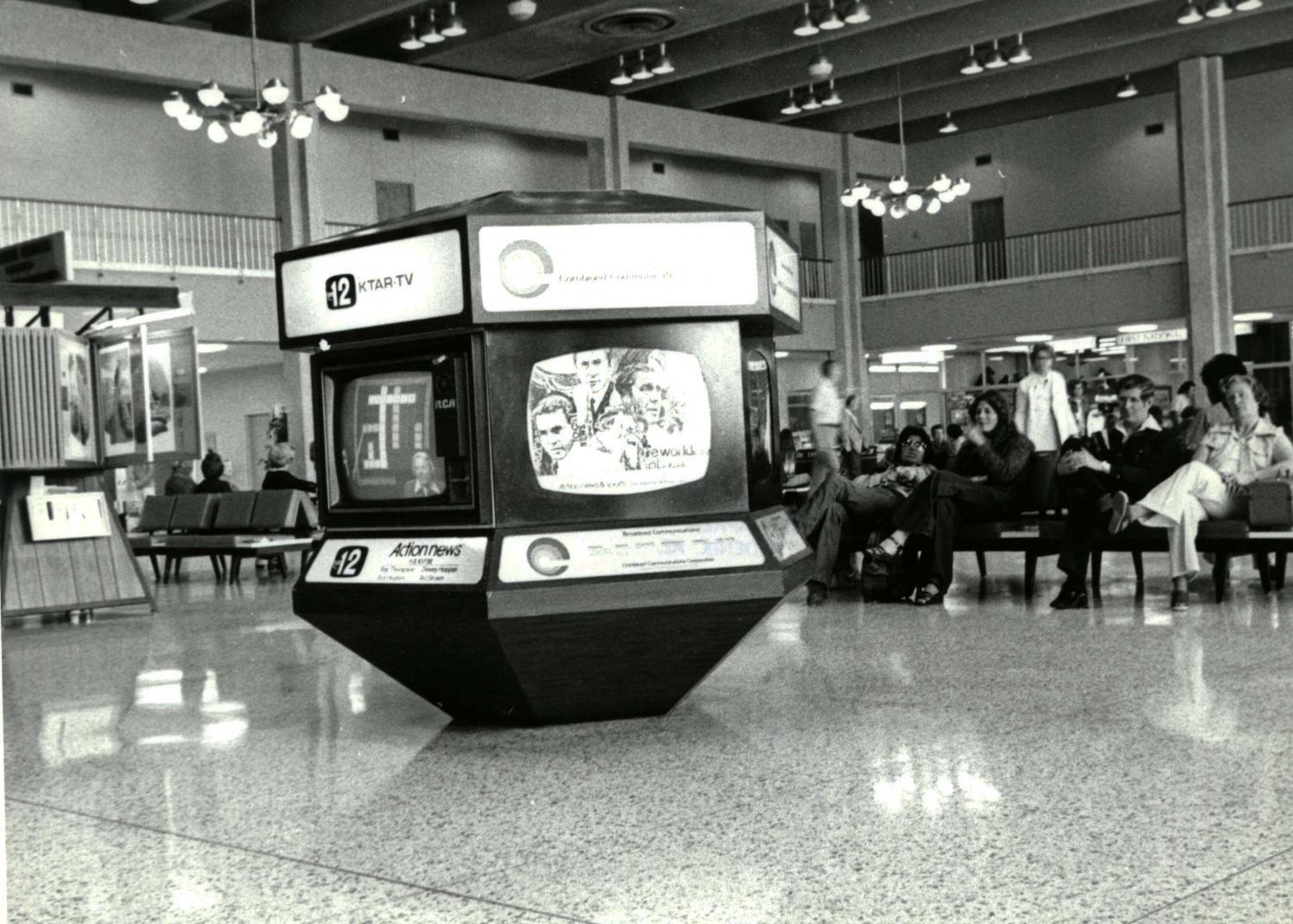 Nine years later, a new concourse opened in Terminal 4 and another one in 2005. Terminal 4 opened in November 1990 with 44 gates. Today, it has 86 gates. Last year, a $590 million modernization project was completed at Terminal 3.

“It’s the largest revenue generator in the state,” Williams said.

Williams said she has mixed emotions about the area’s growth. Overall, she thinks it’s good for Phoenix to be recognized as a major city but is concerned about the traffic.

50 Years Ago, Phoenix Was A City Of Surface Streets 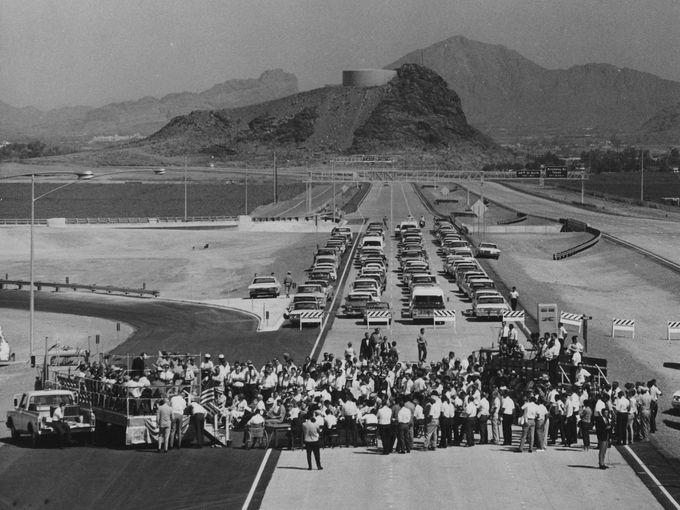 Arizona Department of Transportation
The 1968 opening of I-10 near the Broadway Curve.

The Valley of the Sun has changed a lot in the 50 years since KJZZ joined NPR — including the driving routes people take while listening to our station.

Back in 1971, Phoenix was a city of surface streets.

"When I was going to high school and to college here, it was all about the surface streets. The arterial street system really carried the burden of the traffic in the Valley," said Eric Anderson, executive director of the Maricopa Association of Governments.

Interstate 17 ran from the Durango Curve northward, and Interstate 10 was a 20th street stub that stopped near Buckeye Road. There was substantial public pushback against its completion, including a voter rejection of a proposed I-10 alignment in 1973.

But that didn't stop engineers from dreaming big.

Among those grand designs was the helicoil, a soaring 10-story-high freeway sporting spiraling, city-block-sized exit ramps to central Phoenix. The plan later gave way to the Deck Park Tunnel, which was completed in 1991.

"That was actually the last section of I-10 completed in the United States," said Anderson. 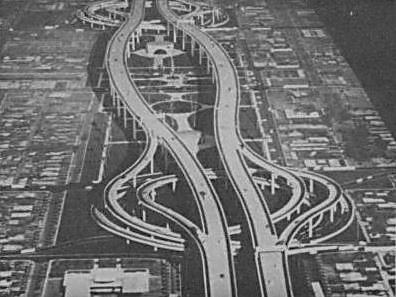 Arizona Department of Transportation
Before the Deck Park Tunnel, planners considered this 10-story-high structure with spiraling exits to central Phoenix.

Another proposed route entailed a pricey Paradise Parkway planned for the Camelback Rd. corridor. That idea withered before the public memory of I-17 construction, which Anderson said badly disrupted southern Phoenix neighborhoods between 7th St. and 19th Ave.

"It really destroyed much of the fabric of that particular area of the Valley. I think we learned from that lesson. I think that some of the pushback on freeways in the 70s really had to do with that."

But rapid growth forced the issue, so in the mid-1980s Metro Phoenix helped pioneer a sales tax dedicated to transportation.

"If the traditional revenue sources had been relied on, like the gas tax, the Loop 101 that we're driving on today would have taken about 60 years to complete," said Anderson.

Half a century on, I-17 and 1-10 now link up with three loops via a split, a collection of stacks, with a couple of curves thrown in for flavor.

Looking to the next 50 years, Anderson says officials are considering how technologies like smart traffic lights and car safety features can improve flow. 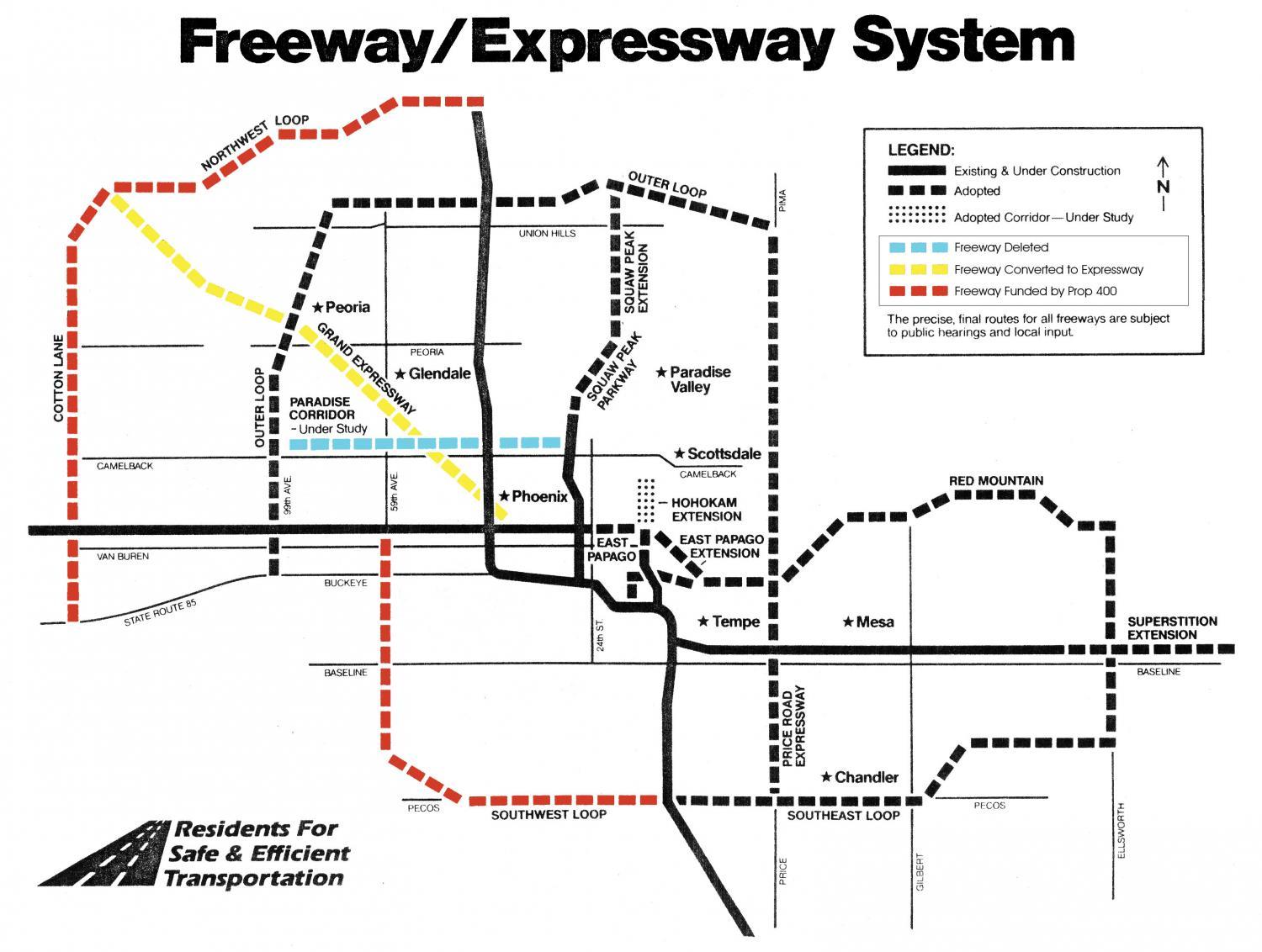 Maricopa Association of Governments
This freeway plan from 1985 shows the removal of the Paradise Parkway.

But the future also will bring more freeways, including State Route 30, an I-10 relief valve for traffic once meant to flow via Paradise Parkway. SR30 will run five miles south of I-10 in the West Valley. From an I-17 connection near the Durango Curve, it will follow the Salt River to link up with State Routh 85 near Buckeye.

Anderson said construction of that corridor depends on the extension of the transportation sales tax.

"The middle section, which runs between the South Mountain Freeway and Loop 303 in Goodyear, has been cleared environmentally and right of way acquisition is underway. Assuming the extension passes, I think opening of this middle section would happen by 2030." 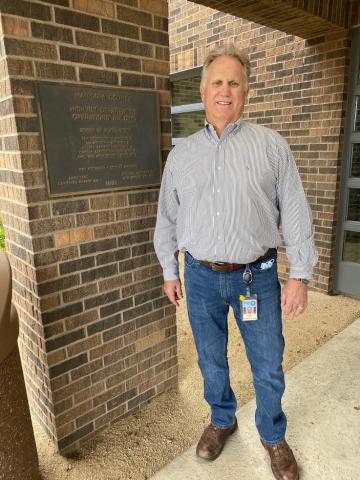 Kathy Ritchie/KJZZ
Skip Harris got his first job with Maricopa County in 1973. He earned $2.67 an hour.

Harris came to Arizona a year earlier and worked as a substitute teacher. But he needed a summer job to tide him over.

He never left. Well, until he retired in 2004 after 31 years of service. But that didn’t last. He came back six years later. And he’s been with the county ever since.

A lot has changed since those early days including Harris’s job title. But when he first started with the county, computers weren't part of the job.

"I don't even think computers were around back then," he said laughing. "So no, we had no computer, no cellphones. When you're out in the field, you communicated with a two-way radio."

That two-way radio eventually went out the door when the county got its first cellphones.

"Oh, the cellphone. My goodness. Yeah. I remember when they first gave cellphones to us. I do remember that. I mean, it was kind of funny. And so people didn't know what to do with these things. I’m used to talking on the radio."

Harris is 71 now and he plans on retiring — again — later this month.