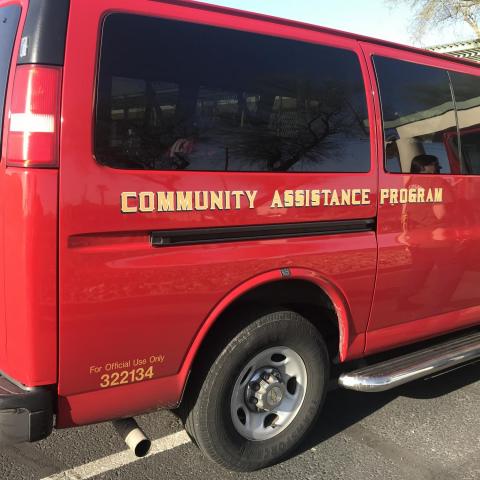 Matthew Casey/KJZZ
In its upcoming budget, the city of Phoenix plans to funnel $15 million into expanding its fire-department-housed program, add staff and get them a new partner for behavioral and mental health care.

Melissa Ziervogel was at the wheel of a red, 15-passenger van when a quick trio of beeps came out of the radio.

“Alright we are dispatched out,” said the crisis response supervisor.

Right now the Phoenix Fire Department has four of those vehicles. But when and how they’re used is complicated.

“There may be times that we only have one van in service to cover the entire Valley,”  she said.

I rode along with Ziervogel, a counselor, and her partner, a social worker. They’re the people police can call for help when parents don’t pick up their child after school, or someone whose father just died has to wait for a mortuary to come get their body.

“What we do is we go out to work with individuals in their most traumatic times of their lives,” said Ziervogel.

"What we do is we go out to work with individuals in their most traumatic times of their lives."
— Melissa Ziervogel, crisis response supervisor

In its upcoming budget, the city of Phoenix plans to funnel $15 million into expanding its fire-department-housed Community Advocacy Program, add staff and get them a new partner for behavioral and mental health care. But police-reform activists oppose the plan that city officials hope will build community trust.

I asked Ziervogel for her take on the plan that’s been tagged as public safety reform.

“There is no, for me, ‘defund the police.’ What we are going to be able to do is to alleviate some of the calls that police get dispatched out on that they shouldn’t be," she said.

Reform activists, including many who do want to defund the police, don’t think the city’s plan goes far enough. They object to the advocacy unit staying within the fire department, an agency they say is too close to the police.

“What we have is an idea, an initiative, for a completely independent first-responder unit," said Jacob Raiford, civil rights activist.

Raiford says under this costlier model, a neighborhood-organized crisis assistance program, would respond to all nonviolent and noncriminal calls. The plan is inspired by a 24-7 mobile program in Eugene, Oregon.

“This is 120% about life-preservative measures,” he said.

City officials have referenced the same program called Crisis Assistance Helping Out On The Streets (CAHOOTS), which gets called into action via Eugene’s communications center for police, fire and ambulance.

“We do recognize that taking a good majority of the dispatches from the police department and housing is under this new department, would relieve them from the burden of work that they go through,” he said.

"We do recognize that taking a good majority of the dispatches from the police department and housing is under this new department, would relieve them from the burden of work that they go through."
— Jacob Raiford, civil rights activist

The police were exactly who Stacie J. Whitaker-Harris did not want at her apartment in August 2020. Her son came in from Baltimore, and her mom-sense quickly told her he wasn’t himself.

“Then he started saying something about somebody had poisoned him. Put something in his drink. And he had passed out. And when he woke up he was Jesus,” she said.

Whitaker-Harris said she spent most of the day trying to find her son help. But none came, and he got more agitated. She asked neighbors not to call 911. But eventually did so herself. The call was tagged as domestic violence. Lots of police came and restrained her son.

“If you call for a mental health crisis, and the person goes to jail, they’re still not getting the support or the help that they need,” she said.

Records show Whitaker-Harris’s son was arrested on suspicion of assault and unlawful imprisonment. She said he’s been diagnosed with a serious mental illness and is getting treatment.

Whitaker-Harris questions the sustainability of the city’s plan to expand the advocacy team within the fire department. First responders are already overwhelmed, she noted.

Ziervogel, the crisis response supervisor in the ride-along van, said this reality is why she hates the words "defund police."

“How can we defund something that is already so understaffed?” said Ziervogel.

Ziervogel is excited to grow the team she discovered as an intern and has been with off and on for a decade. Part of the process is to review policy and decide what calls they can take without police. These could involve the homeless, and people having anxiety attacks.

“If we can help them with these other things so that they can focus on the things that they were trained on, the types of calls that they really should be going out on, those crime-related calls, right on,” she said.

Ziervogel is confident her team can do more to help Phoenicians than it’s able to do now. If the plan for them to get more money and resources is part of the final budget approved by the City Council, they’ll have a chance to prove it.