“Breakdown Lockdown” is an ode to living during a pandemic as a teenager; it captures the frustrations of isolation and coping with anxiety. Even with all the limitations, Robert Boaz Curry-El, the band teacher at the Grand Canyon School, wanted his students to participate in the festival.

Since 2007, it's a yearly tradition that Grand Canyon School of Rock musicians travel from New York City and help students learn some songs. But Steve Benson, who’s one of the musicians, said the songs have never been original.

"Usually what we’ve done is from Monday until Thursday we teach kids rock 'n' roll tunes — old ones from '60s, '70s but more current ones, too — and we kind of mix it all up and it’s a crash course for them and us, too," Benson said.

As a musician himself, Curry-El knew songwriting was tough but not impossible, especially if there are 11 dedicated music students ready to learn.

“I wanted to show them how powerful music could be, by them putting their real thoughts down and us putting a song together with it," Curry-El said.

"I wanted to show them how powerful music could be, by them putting their real thoughts down and us putting a song together with it."
— Robert Boaz Curry-El, Grand Canyon School band teacher

And so the students got to work. They were introduced to an online recording studio that took some getting used to. Well, the whole song-writing process took some trial and error.

“I felt like it was the great equalizer that made student and teacher alike all have to learn from scratch," Curry-El said.

While Curry-El was working through the hurdles, the students were learning their instruments and recording tracks. Lennon Alvarez was one of the students.

“Throughout the whole process people were like, ‘Yo, check this out, this sound really cool,’ and I’d be like, ‘Yeah that does sound really cool let’s add that, record that, add it to the track,''' Alvarez said. "And the song just kept snowballing from there."

Alvarez is a junior who actually ended up moving to the Grand Canyon School in the fall. You can hear his voice on the first verse of the song. As a new student, he says that writing a song helped him feel closer to his peers.

“There’s a huge difference between working on a math problem together and creating art with some new people," Alvarez said. "It was definitely a challenge working over Zoom." 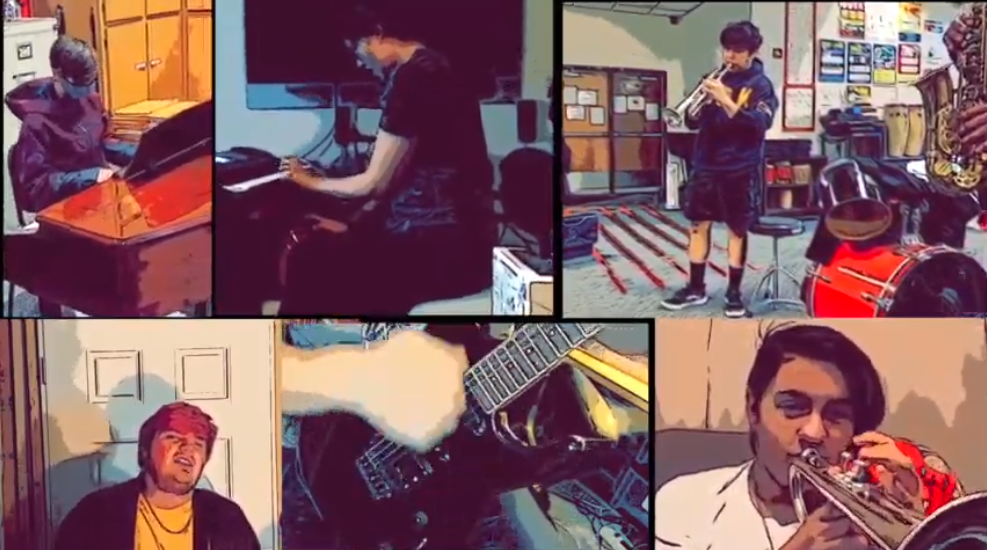 Working on Zoom was not the only challenge the students faced. They also had to find a balance between recording and schoolwork.

“Ultimately, if you put the most important thing first and then realize well, I've got to get my math homework done if I want to create this," Alvarez said.

The students faced many technical challenges as well.

"There were a lot of things where the kids could’ve gotten really frustrated and said it’s too much work," said John Vail, another Grand Canyon School of Rock musician. "They just kept chugging away and were able to pull it off."

The songwriting and recording process was sort of this reward the students looked forward to everyday.

“Right after we finished the lyrics and we were going onto record, the whole vibe just switched from ‘I don’t know if we can do this,’ to ‘I know we can,''' Alvarez said.

Joe Deninzon is the co-founder of the Grand Canyon School of Rock program and said he loves doing this every year, but this one will definitely stand out to him the most.

"It was honest and it was very powerful," Deninzon said. "We were working with really strong raw material in that regard."

That raw emotion is something that Alvarez said you can’t fake. Having music knowledge to express it is just an added bonus.

“Once you have that knowledge of scales, or even if you don’t. Even if you’re just singing, you can find ways to capture that emotion," Alvarez said.

And so what started as an uncertain couple of months, turned into a fully-fledged song and music video at the end. After they were featured at the festival, the students also aired their finished video for the entire school. This just shows it’s possible to record a whole song using Zoom, but only if there is dedication and authentic emotion behind it.