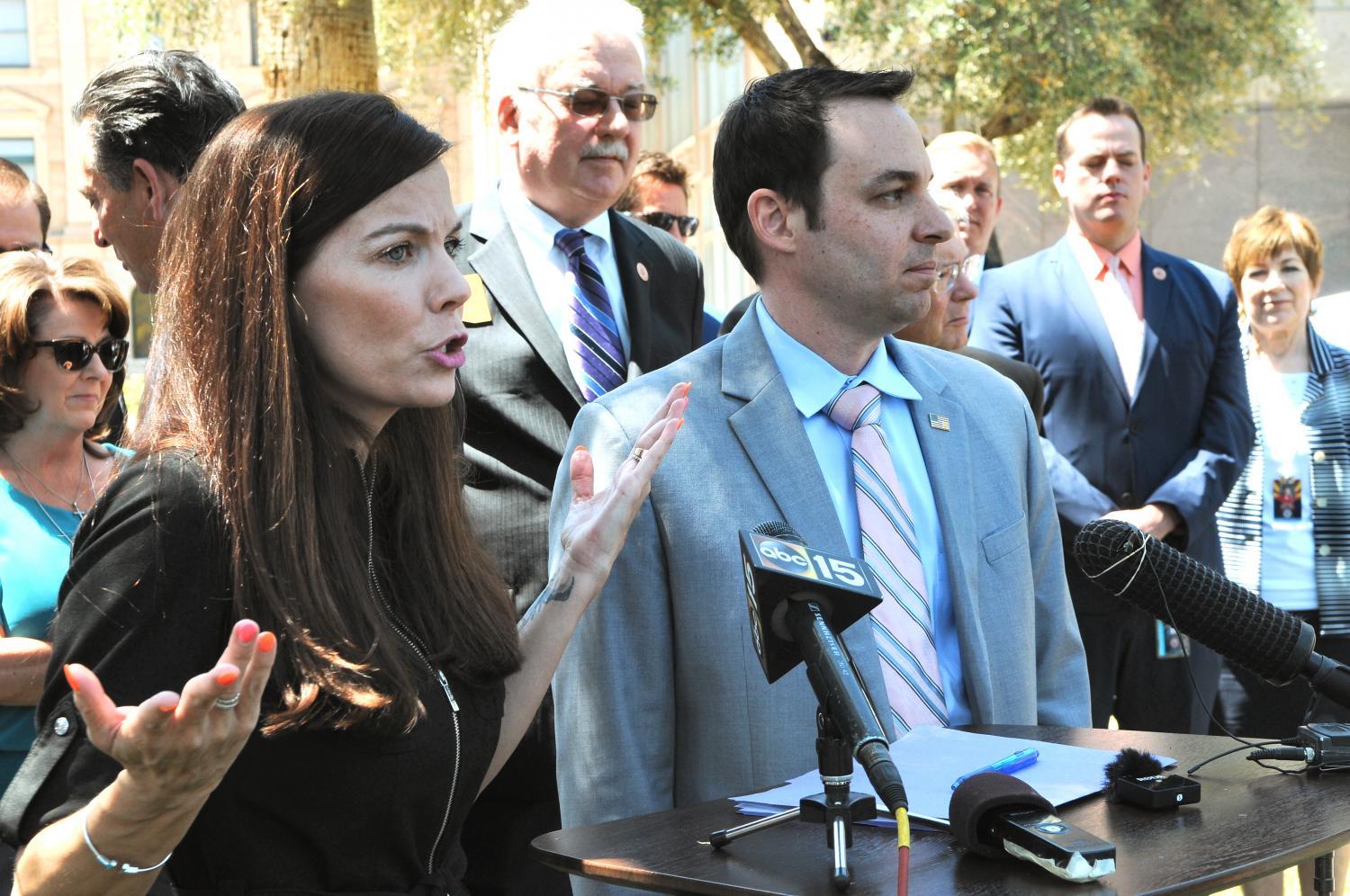 Two Republican senators lashed out Monday at businesses and the media, accusing them of mischaracterizing what is in changes they are proposing to state election laws.

Michelle Ugenti-Rita of Scottsdale and J.D. Mesnard of Chandler said their measures simply add necessary layers of security to the election process. They said the terms of both bills and their motives have been distorted in news coverage.

But the pair, at a press conference backed by other GOP legislators, saved their harshest criticism for Greater Phoenix Leadership, an association of CEOs in business, education and philanthropy, some of whose members sent an open letter to legislators saying three bills — including the two both are sponsoring — "seek to disenfranchise voters."

"They are attempts at voter suppression cloaked as reform — plain and simple," the letter states.

"If you disagree with my bill or any of the bills these other members represent in the name of election integrity, that's fine," Ugenti-Rita said. "But you don't get to mischaracterize and lie about it."

She said it's the process for people to debate the relative merits of legislation and suggest changes.

"But you don't get to label everybody who may support it as racist," Ugenti-Rita said. "We're not going to be intimidated."

There was no immediate response from GPL.

Monday's event was more than just an airing of the grievances of the two senators. The pair also are trying to pressure House GOP leadership to put the measures, both of which have cleared the Senate, up for a vote.

Both proposals deal with early voting. Arizona has some of the simplest laws, with individuals allowed to be placed on a "permanent early voting list" and be guaranteed to get a ballot in the mail ahead of each election. That ballot can be mailed back or dropped off at a polling site. Every early ballot is reviewed by county election workers to see if the signature on the outside matches what they have on file. If there is a discrepancy, a call is made to the voter to determine the ballot's veracity. Reasons for such variance can range from people getting older to someone having a physical condition.

The result of all this is about 80% of Arizonans now use early ballots.

Mesnard's proposal, SB 1713, would require anyone sending in an early ballot to also provide a date of birth as well as either a driver's license number or a county-issued voter ID number. That has raised concerns for people who do not drive, as few people are aware of their ID number.

He did not dispute that there is no evidence of widespread fraud in the process in Arizona. But Mesnard said that's irrelevant.

"I don't even have to sit here and debate whether someone found evidence or not," he said.

"What is undebatable is that people have a lot of concerns about it," Mesnard said. "That, by itself, is a threat."

And he specifically rejected that the reason for voter doubt is that Donald Trump spread rumors for months before the 2020 election that early ballots are inherently untrustworthy and insisted that the only way he could lose is if there was fraud.

"At the end of the day, these things began long before President Trump was president," Mesnard said, though he said it did reach a "pinnacle" during the campaign.

"The response is not just to dismiss them because he claimed there was fraud and we didn't have some sort of level of evidence that meets somebody's standard that we're not going to do anything," he said. "We're not going to ignore those problems."

He produced a poll taken by Data Orbital earlier this month which found that a majority of Arizonans, including half of those who vote early, saying they had at least some concern about their votes being "properly counted," though the survey does not explain what are those fears.

Ugenti-Rita is pushing SB 1485. It spells out that if someone does not return an early ballot in at least one of four prior elections — meaning a primary and a general election in two successive years — the person is dropped from what would no longer be called the permanent early voting list. They could still sign up again to get early ballots and they could still go directly to the polls on Election Day.

Foes contend this would have a disparate negative impact on minority voters who may be less inclined to vote in every election but still want the option of getting that ballot for the years they are interested in casting an early ballot. It also means that political independents, who usually do not cast ballots in partisan primaries, have just two chances to comply versus four for partisan voters.

Ugenti-Rita said she is going to make "small, meaningful tweaks" to the measure in an effort to address critics but declined on Monday to provide details.

The issue of what the business community thinks about the bills — or at least the message the proposals send — became more crucial following the decision of Major League Baseball to move the All-Star Game out of Atlanta after the Georgia Legislature enacted several measure that were perceived to be attacks on minority voting. Arizona has some potential risks in that area, with the state scheduled to host the 2023 Super Bowl, the NCAA Men's Final Four in 2024 and the Women's Final Four two years later. As the Georgia situation shows, sports leagues have shown themselves to be averse to political controversy, particularly on issues like race and gender.

There's also the question of whether businesses might decide to locate elsewhere to avoid being linked to negative publicity about Arizona voting laws. Ugenti-Rita made it clear she didn't care.

"That's their choice," she said. "And I would say, don't let the door hit you where the good lord split you."