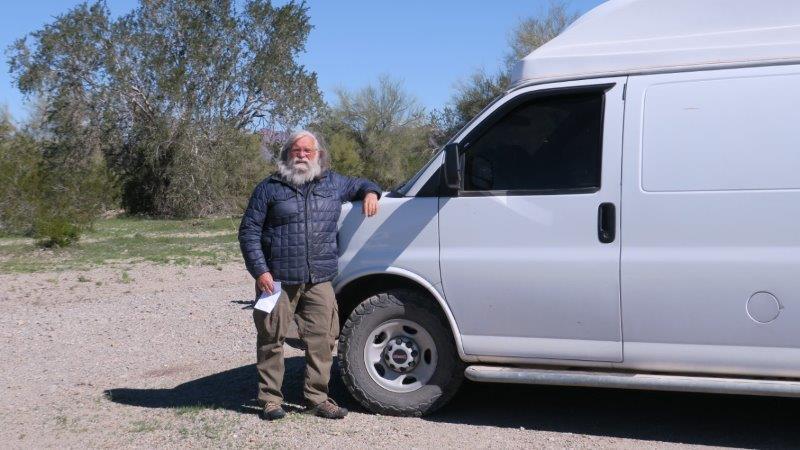 The Academy Awards will air later this month, and among this year's Best Picture nominees is a film that prominently features Arizona.

KJZZ's Katherine Davis-Young joined The Show and spoke with Bob Wells, one of the stars of the film "Nomadland" about his real-life connection to our state.

So the film tells the story of several older adults who have taken on a nomadic lifestyle in the American West. It includes a few Hollywood actors like Frances McDormand. But most of the cast, including yourself, really are nomads. Can you start by telling us a little bit about how you first adopted this lifestyle?

Well, like an awful lot of people, I was forced into it economically. I was going through a divorce. And so while we were doing fine with a single household, when I had to set up two households, there just wasn't the money for that. And so I decided I'd been a camper and a backpacker all my life. If I could live out of a backpack for a month at a time, I could certainly live in a van. And so I moved into a van ... I moved into that van in 1995 and I lived in that van 'til 2001 — for six years straight. And then I actually moved back into a house and hated every single second of it. And so finally in 2008 I moved back into a vehicle and have lived continuously in a vehicle since 2008.

Did you ever imagine that your journey to living in a vehicle would eventually lead you to being in a Oscar-nominated film?

Never in a million years would that have ever occurred to me. If I, if I set out when I was a kid and said, "I'm going to be in an Oscar-nominated film" and tried to work towards that, I'm sure I couldn't have made it happen. But here it just happened by serendipity.

The film includes some of your real life and some real people you know. What did you feel like it got right about the nomad lifestyle and what parts felt more like Hollywood?

You know, I would say every bit of it felt like the real nomad lifestyle. It really did. They captured it so well. Now, we are like, we're a cross-section of the nation. So there are those of us with, who are older and on pretty dire financial straits. There are also those of us older who don't ever have to think about money again. And there are younger people. There are, all the time, there are more and more younger people. So I have a friend who wrote code in Silicon Valley. He's got a million dollars in the bank and he lives in a Subaru Forester full time. And that's the life he chooses. So it's a broad spectrum of ages and economic conditions. So the movie doesn't tell all those stories. It doesn't try to. It tells one story of one older woman and it tells that story perfectly.