Mesa Is Getting A New Surf Lagoon. Can The Phoenix Area Support Water Parks In A Drought?

Big Surf was unveiled more than 50 years ago in Tempe, and it was a unique part of the desert. Sure, this was a hot, dry place, but we could still enjoy some manmade water activities.

Late last month, Cannon Beach Mesa broke ground as the next generation of water park. The press release includes this line: "The project ... will bring the ocean to Arizona in a place unlike any other in the state."

But not everyone is excited about a new water park in the midst of an ongoing drought. One of those people is Sandy Bahr of the Sierra Club. She spoke with The Show about her concerns. 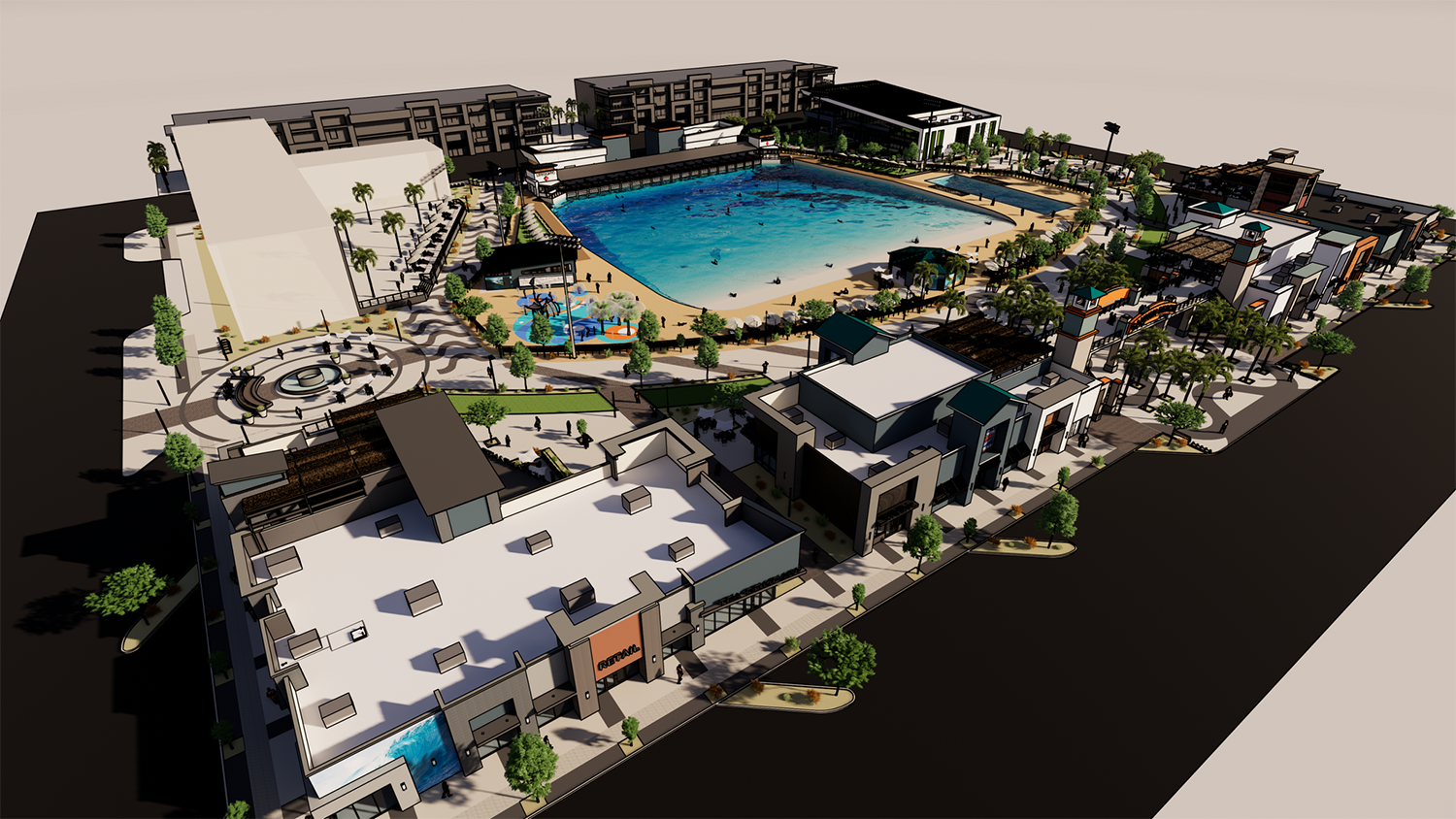 Cannon Beach
Rendering of the Cannon Beach development in Mesa, which broke ground in March 2021.

What do you think of water parks like Cannon Beach even being proposed in the desert?

I think it's ridiculous. There are a couple reasons for that. Well, they do use a lot of water, maybe not compared to a big alfalfa field, but they still use a lot of water and they send the absolute wrong message about where we're living. We're living in the Sonoran Desert. The Sonoran Desert is a beautiful place. There are a lot of amenities. There are so many things that we can do in the desert. Do we really need a place that mimics the ocean? It just it sends a message that we we don't have to worry about water. We'll just, you know, forget about that and go surfing in the middle of the Sonoran Desert in the middle of a deep drought.

Why do you think ideas for these kinds of developments come up periodically around around Arizona?

Well, I think one thing is people, developers of whatever type, enjoy a lot of privilege in Arizona. And so I think that people with these types of ideas are attracted to our communities because we don't have a lot of requirements. ... I was thinking about this proposal and a previous one where they were proposing skiing — snow skiing indoors and in Phoenix. And of course, that takes a lot of water and a lot of electricity to have a project like that. Now, that particular one didn't take off, but we do seem to invite that kind of thing. And I think it's because we do have a lot we have fewer requirements of developers and we do try to send a message that, "Oh, we have plenty of water," even though we really don't. And so I think that invites these types of developments as well. The conversations I hear at the state legislature and in these water meetings is people, you know, they don't want the rest of the country to think that Arizona has a water problem. So while this surfing facility is being proposed, the Legislature is talking about funding proposals to bring water from the Mississippi River, for example. I think they think there will always be enough money for the next big water project instead of just thinking about how can we conserve water and live within our means in Arizona.

People who come from other places, you hope they embrace the desert, but they also come with other sensibilities to some extent. How much of a challenge does that carry with it? And does that ever play into some of these water park proposals, too?

I think it does. I think to know something is to love it, right? And I think with the Sonoran Desert, that's the case. People have connotations that are associated with the desert — they think of a barren place: hot, barren, dry. Well, it is hot and dry, but the Sonoran Desert is anything but barren. It's lovely, and there's a lot of biological diversity there. So I think when people actually get to know it and understand it, they do develop an appreciation for it. But that's one of the things that doesn't happen if we are constantly putting in turf and developing places that mimic an entirely different part of the country. So, yeah, I think it does play into it.