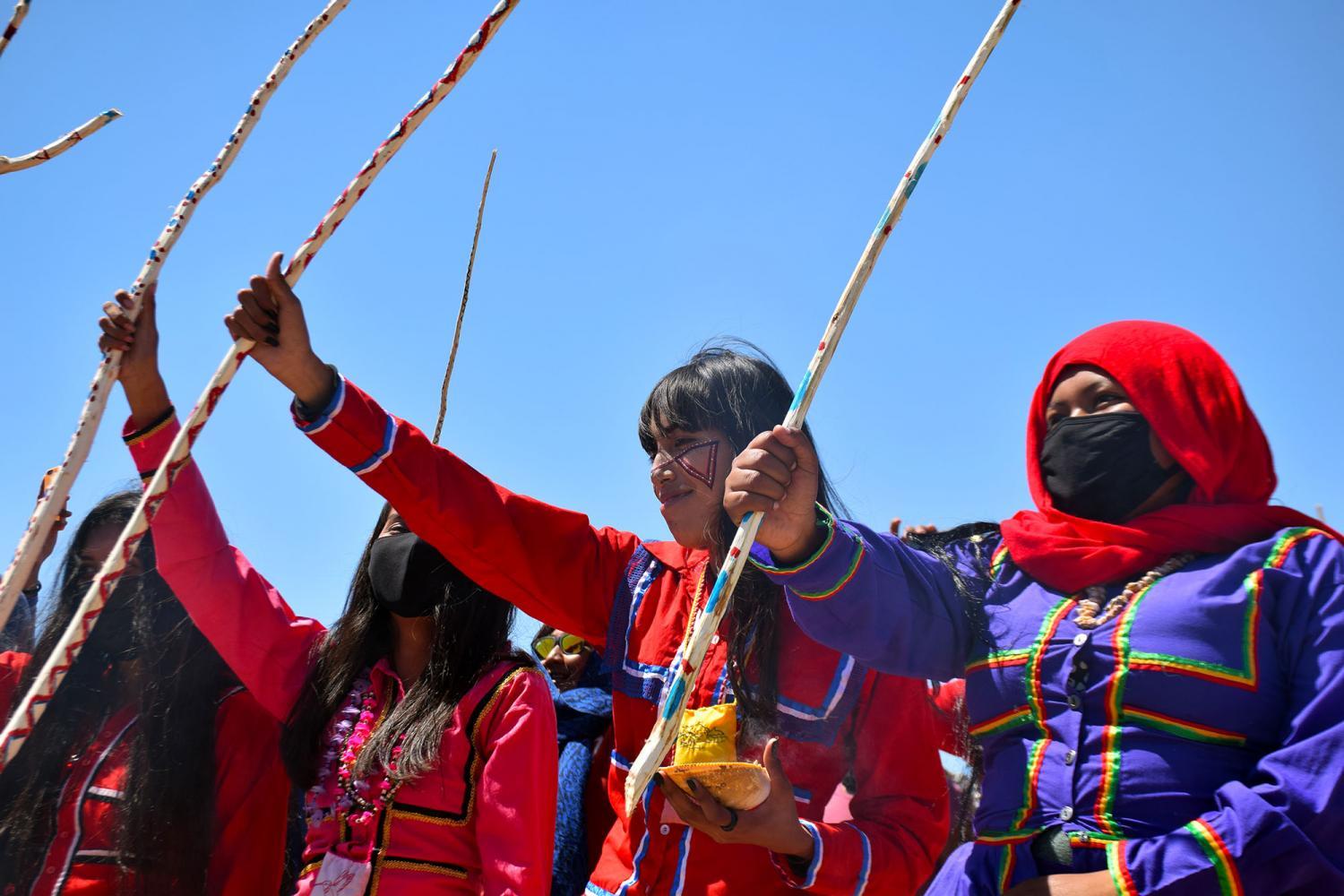 Kendal Blust/KJZZ
With ceremonial sticks raised in a sign of victory and brotherhood, members of the Comcaac Nation from El Desemboque welcome their relatives and friends from Punta Chueca to Saaps, Sonora, on March 27, 2021.

Separated by more than 40 miles of rough desert road along the Sea of Cortez, members of the Comcaac Nation from El Desemboque and Punta Chueca left their homes at 4 a.m. Saturday, their path lit only by the light of the moon.

Some walked nearly eight hours to reach their destination: an ancestral meeting place between the two villages known as Saaps, or Playa Dos Amigos — a pristine beach surrounded by towering cardon cactus.

With the wind kicking up dust around them in the midday sun, family members and friends cheered, embraced and lifted ceremonial sticks in the air, a sign of victory and brotherhood in honor of the historic reunion of the two Comcaac communities.

“It’s been many years since the community has gathered this way,” said Miguel Estrella Romero, traditional governor of Isla del Tiburón, Mexico’s largest island and part of the nation’s territory. “And for me it’s a success that we’ve come to camp here again, where our ancestors used to hold sacred ceremonies long ago.” 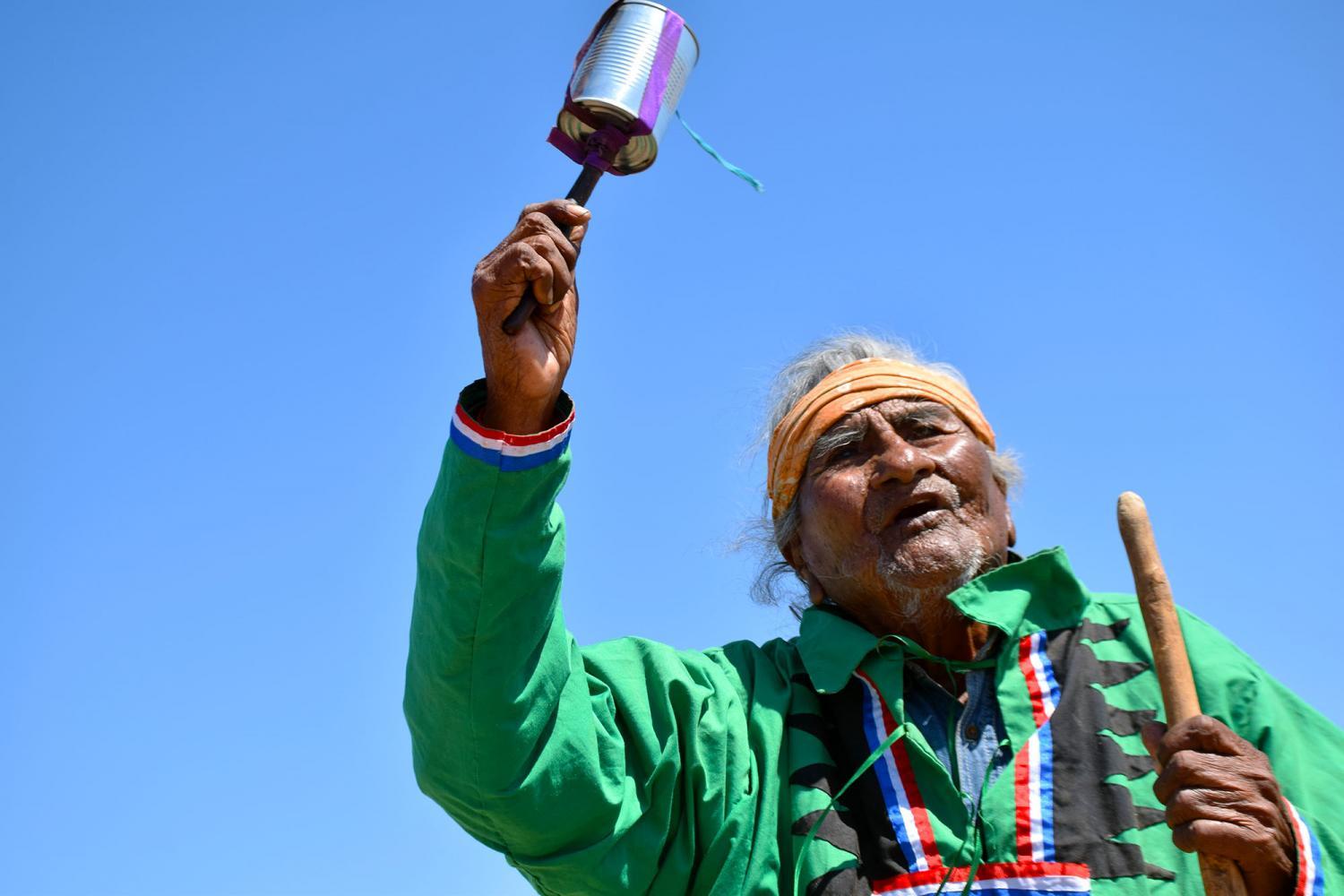 Soon, the crowd of more than a hundred people gathered in a large circle, listening to leaders speak first in Cmiique iitom, the Comcaac language.

Then, Francisco Fonseca, a tribal representative to the Sonoran municipality Pitiquito, continued in Spanish, so the "cocsar," or non-Indigenous people, who had joined the gathering could understand.

“This walk has a purpose for our community. We made this trek to unite our two villages in harmony and in the fight we find ourselves in now. Why? Because the white man, the government, has not given us prosperity, hasn’t helped us, hasn’t provided for our right to water, our right to health,” he said. “Today our leaders are going to work on that, and our community will be behind them. Today we declare the fight for our communities!”

The crowd rang out in applause and shouts of support, that became celebratory song and dance.

“This is what I want, what the leaders say, that there will be no more problems between our people,” said Adolfo Burgos Felix, an elder who has served as the master of dance and song in El Desemboque and who led many songs during the reunion. “I am singing now because I have the pure spirit of joy today.”

Like many in the community, he said the meeting in Saaps represents reconciliation between the two villages that have at times clashed in recent years. 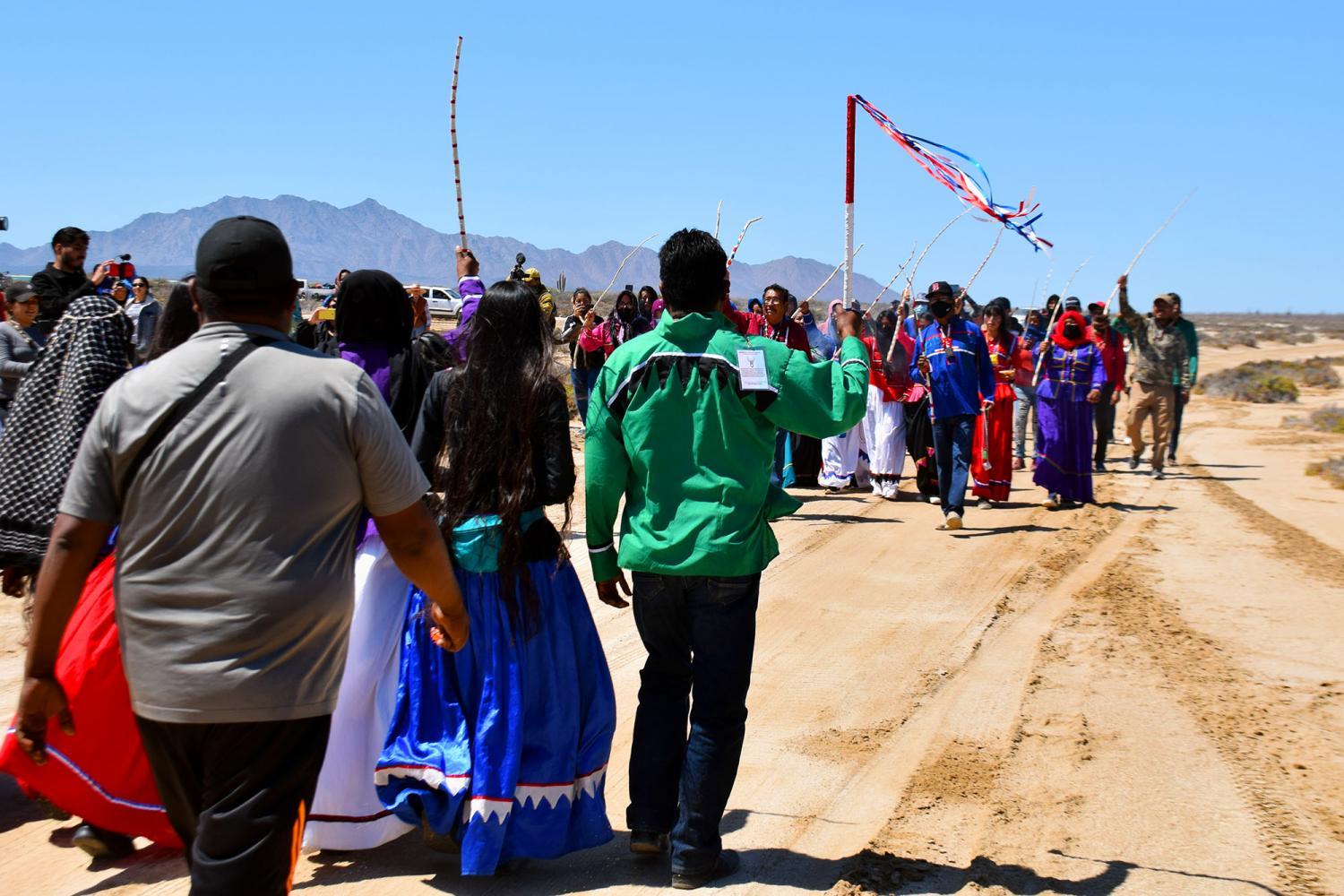 Kendal Blust/KJZZ
The Comcaac communities from El Desemboque and Punta Chueca met in Saaps, Sonora on March 27, 2021, to demand water for their people.

It’s also a return to the ways of their ancestors, who walked these sacred lands out of necessity, searching for food and water.

“There weren’t nomads just to be nomads,” said Mayra Estrella of El Desemboque. “And now we’re back here because we are in need. Right now in both communities we’re living without water.”

The shortage started in El Desemboque in December, when a pump for the well that has served the community for years broke because of power instability. Facing economic hardship during the pandemic, the town has accumulated several thousand dollars in debt with Mexico’s electricity commission.

“And in the middle of the pandemic, they cut us off,” she said, describing how the commission turned off the community’s water, and with it their water supply. “From my point of view, you can’t deny anyone water. And that is what’s happening to our people now.” 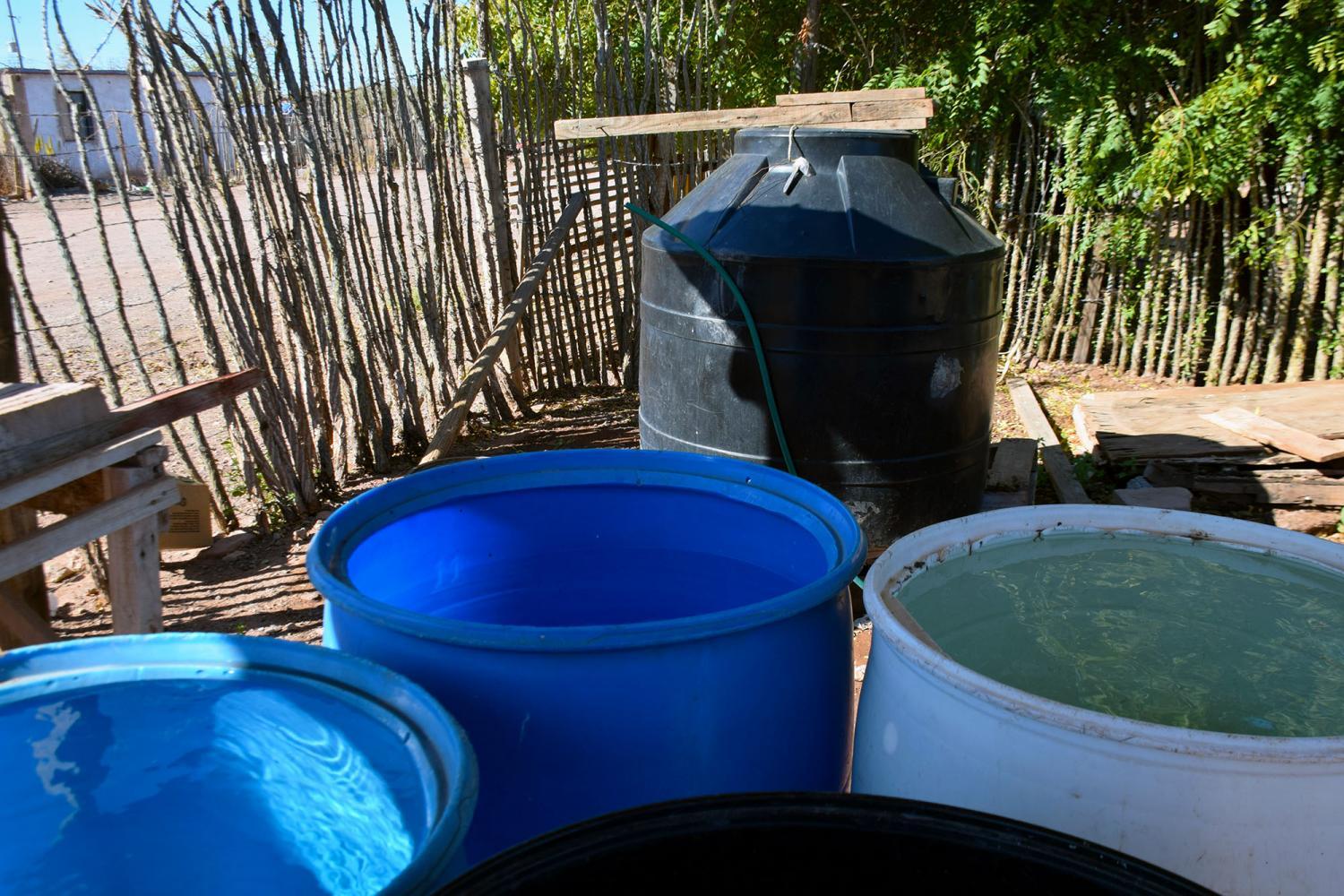 Kendal Blust/KJZZ
Because potable water is scarce in Punta Chueca, those who can afford to pay to have large tanks and drums outside their homes filled with water.

Electricity has been restored, but El Desemboque remains in debt and has been unable to repair its well. Leaders are asking the electricity commission to forgive their debt as delayed compensation for government roads and towers built on Comcaac land.

But in Punta Chueca, just north of the beach town Kino Bay, water scarcity is a more complicated and longer-standing issue.

“There has always been a lack of water there,” Estrella said.

A desalination plant built years ago frequently stops working, but even when operational can’t supply the entire community. So people are left to haul water some 20 miles from Kino Bay, or if they can afford it, buy water from trucks, filling large tanks and drums outside their homes, which they use for cooking, cleaning and bathing.

Well-known Mexican singer Rubén Albarrán of Café Tacvba, along with Andrea Medina Riancho, an activist and academic who works with Indigenous communities in Mexico, have been meeting with the community for more than a year to address water scarcity, as well as strengthen its social fabric through dialogue and conflict resolution.

Last year, they helped the community in Punta Chueca carry out hydrological studies that pointed to a promising location for a new well. But initial drilling turned up only salt water.

“To live without water is to live on an unknown, distant planet, where there is no life, no existence,” Sócrates Rodríguez read aloud from a letter to government leaders signed by Enrique Robles, president of the nation’s Council of Elders. “Water provides life to all living things. For us to be without water is a sadness we feel in our hearts. The cocsar government has been very hard on Indigenous people.”

With the vast Isla del Tiburón loomed in the distance, he spoke to a crowd now seated on the beach under traditional ocotillo arches strung with shells and red, white and blue ribbons — the colors of the nation’s flag. 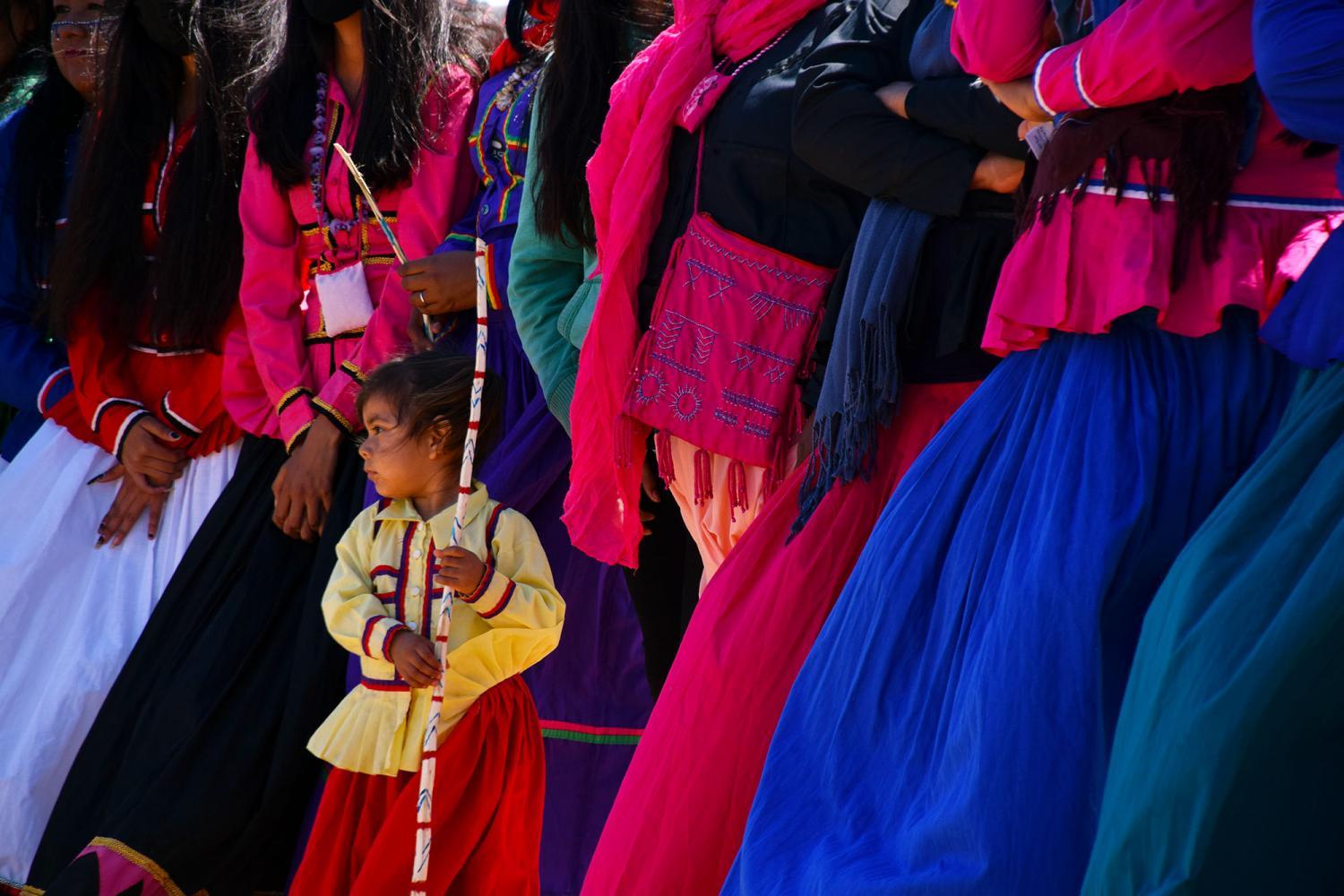 Kendal Blust/KJZZ
A young girl listens as leaders of the Comcaac Nation speak about the reasons for their historic walk and meeting in Saaps, Sonora, on March 27, 2021, to demand water.

They have always lived in harmony with this land, he said. But now in contact with the outside world, they are in need of some of its ways of life.

Their demand is for the government to meet their basic human right to potable water, as guaranteed by Mexico’s constitution and the United Nations; and provide a resolution to their conflicts with the electricity commission; quality, culturally relevant education for their children; and reliable trash collection.

For years now, they have been pushing the government to fulfill its obligation to ensure residents of Punta Chueca have access to water.

“We have asked for meetings, turned in petitions; we have gone before the three levels of government and human rights offices,” Rodríguez read. “And we have not received any answer.”

This time, they’ve asked the government to respond to their demands by April 12.

“The saguaros, the trees, the water and all life on earth came from an ancient song our grandparents have sung for thousands of years,” he said. “Today we share this song as an arrow to carry the prayer of our Comcaac Nation.”

Standing before the crowd, President Robles began to sing, and many of those around him joined in. 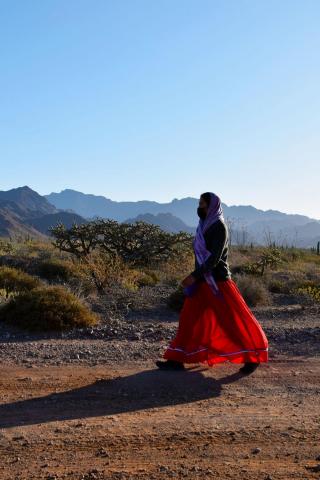 Kendal Blust/KJZZ News
A woman walks from Punta Chueca toward Saaps during the Caminata Comcaac on March 27, 2021, where the Comcaac Nation demanded the government take action to address a long-standing water shortage. 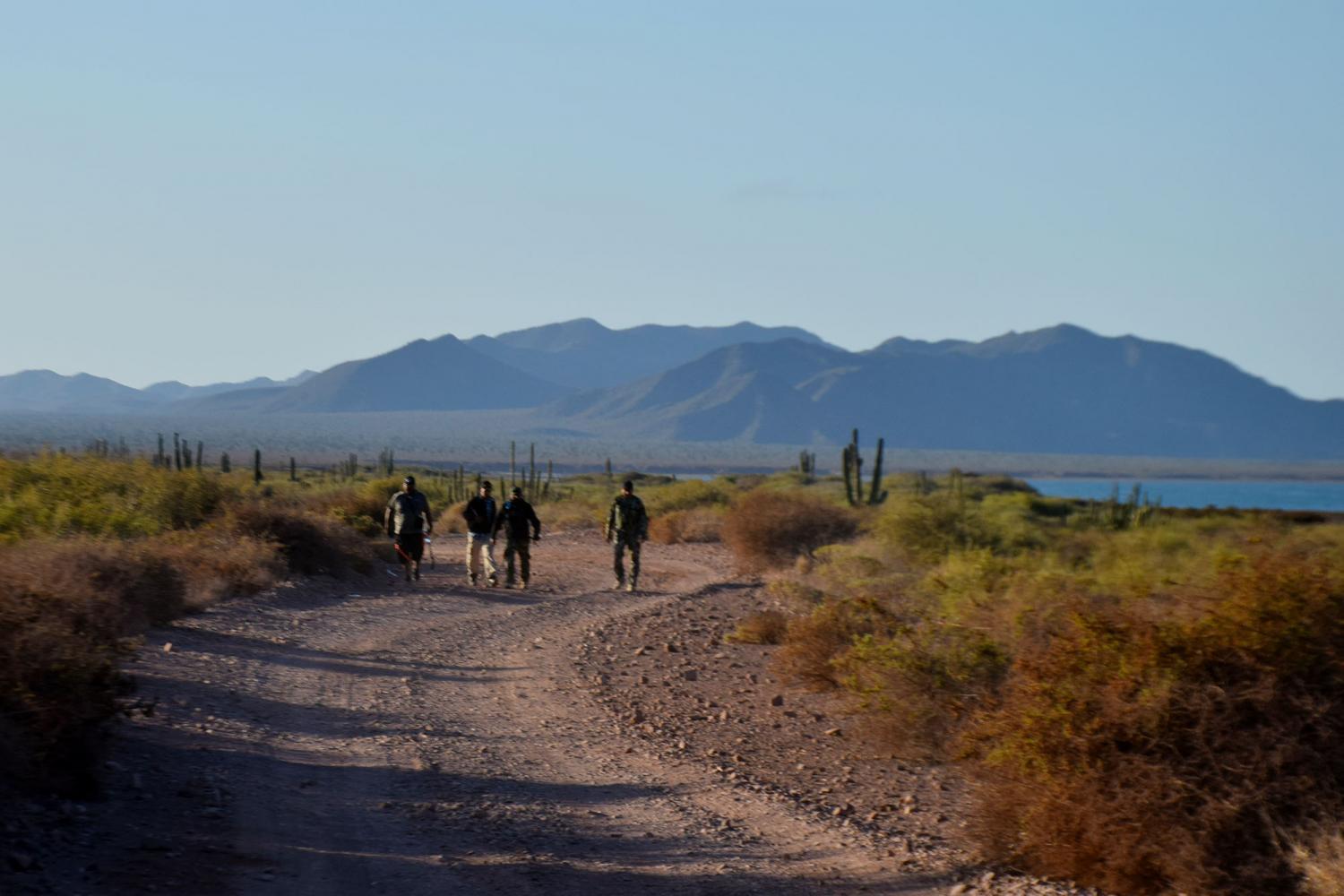 Kendal Blust/KJZZ
A group from the town of Punta Chueca walks to a historic meeting of the Comcaac Nation in Sonora on March 27, 2021. 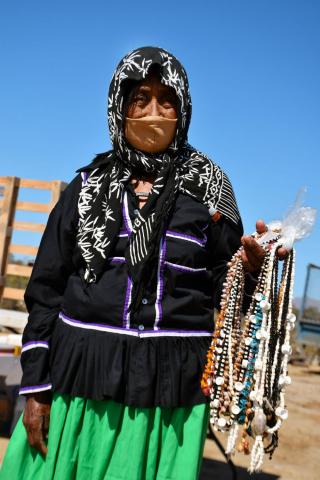 Kendal Blust/KJZZ
María de Jesús Felix joined other members of the Comcaac Nation in Saaps, Sonora on March 27, 2021, to demand water for their people. 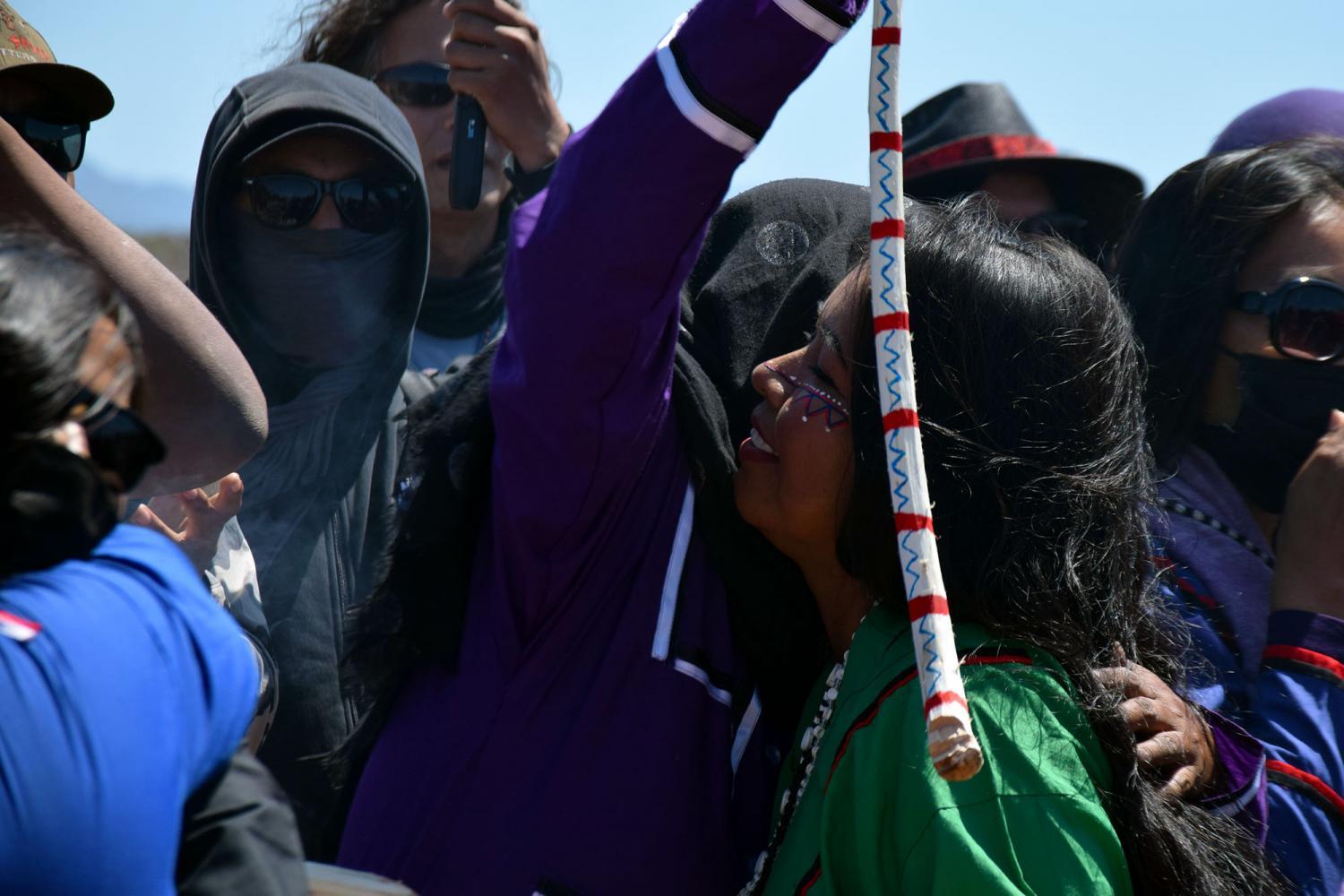 Kendal Blust/KJZZ
Members of the Comcaac Nation from El Desemboque and Punta Chueca embrace at their historic reunion in Sapps on March 27, 2021. 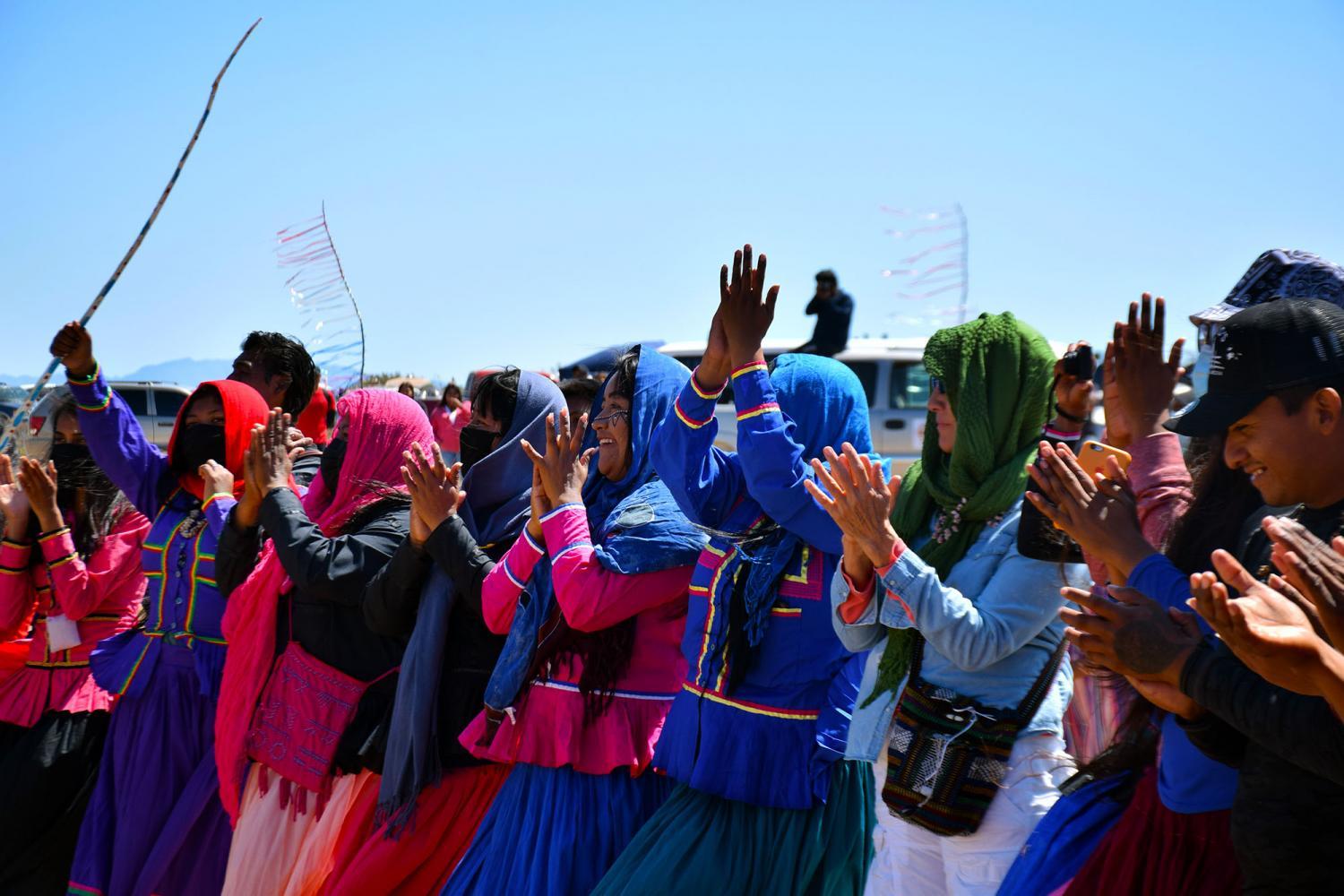 Kendal Blust/KJZZ
Women cheer as leaders speak of the Comcaac Nation's fight for water during a historic reunion in Saaps, Sonora on March 27, 2021. 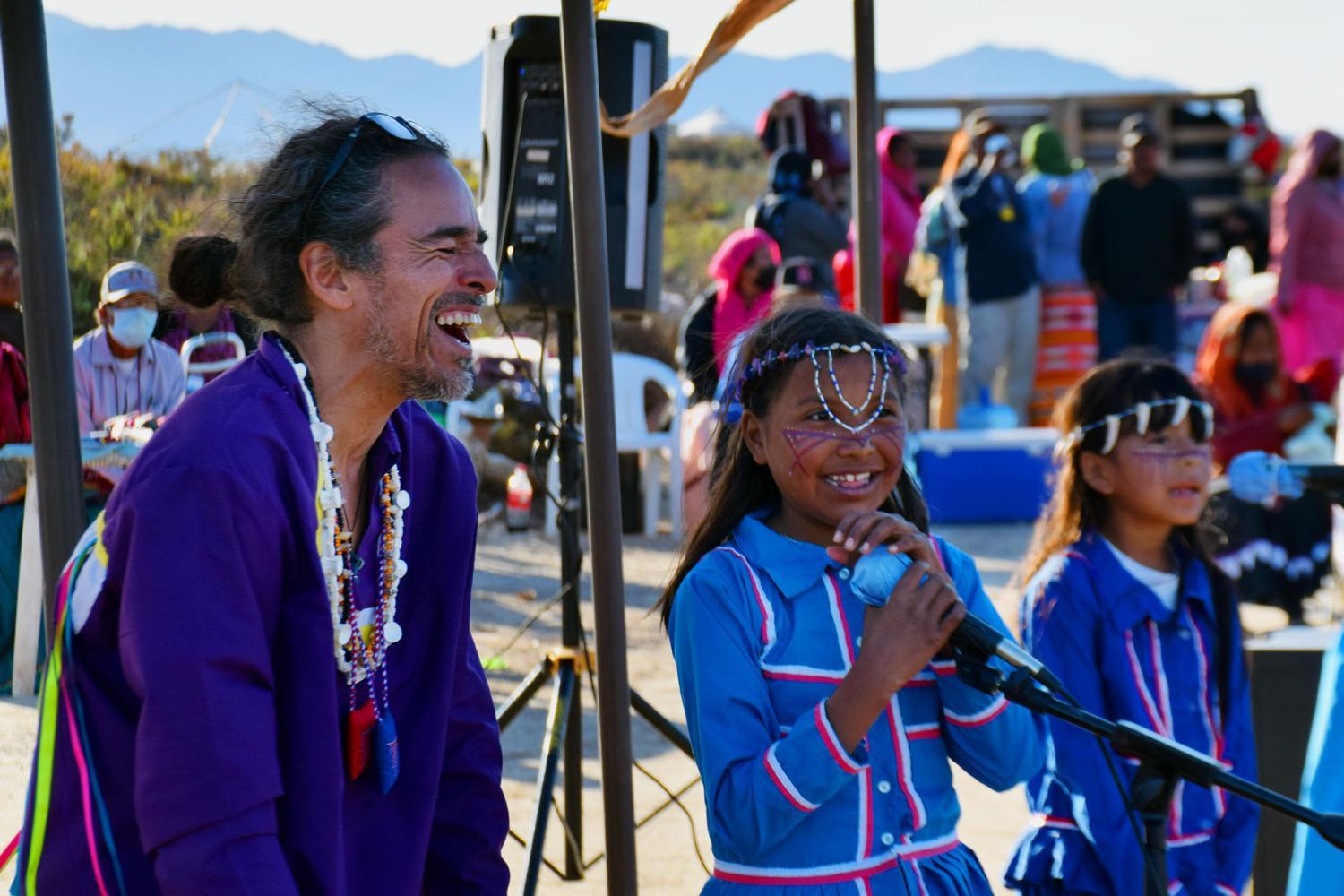 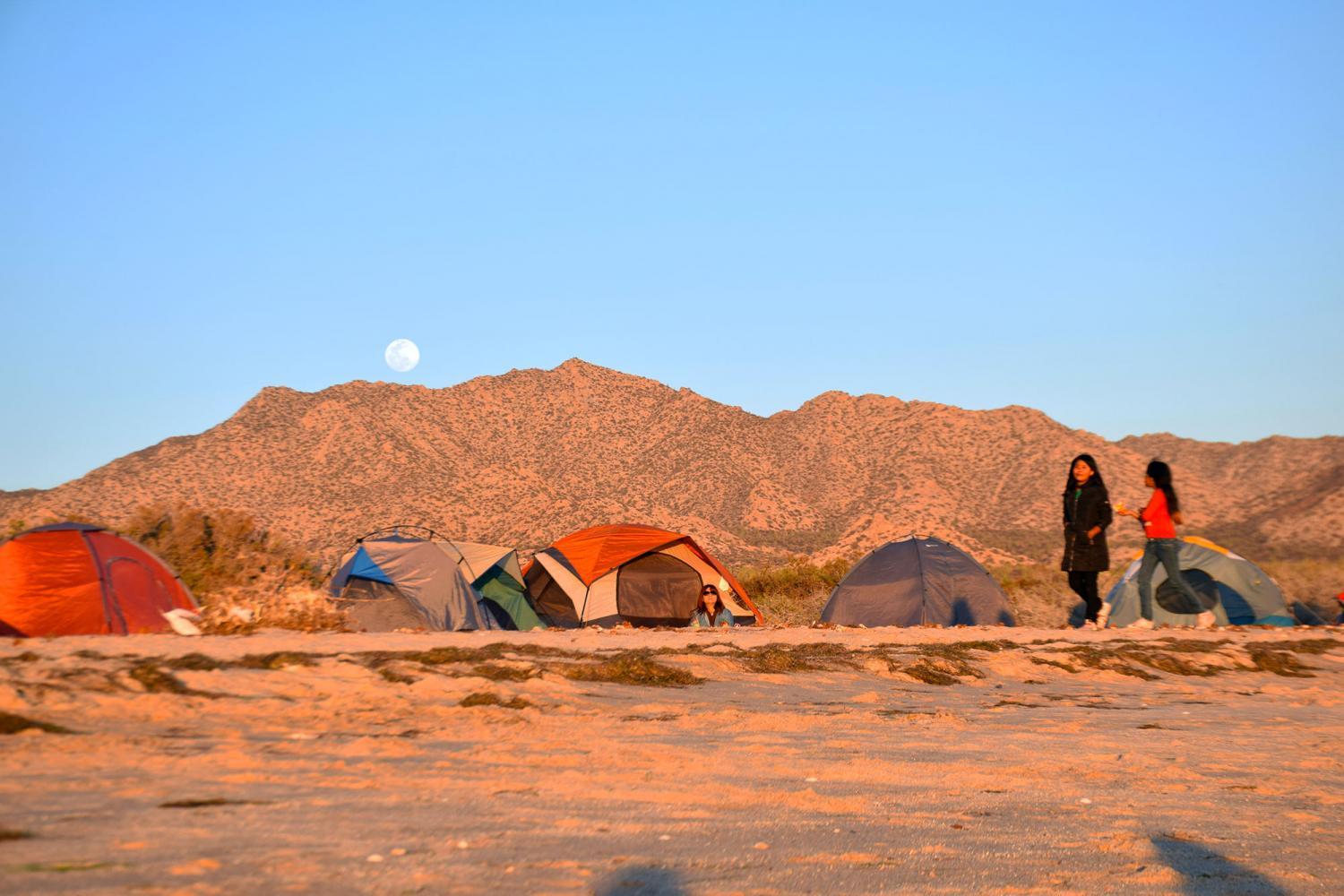 Kendal Blust/KJZZ
The moon rises over the Saaps, Sonora, encampment on March 27, 2021. 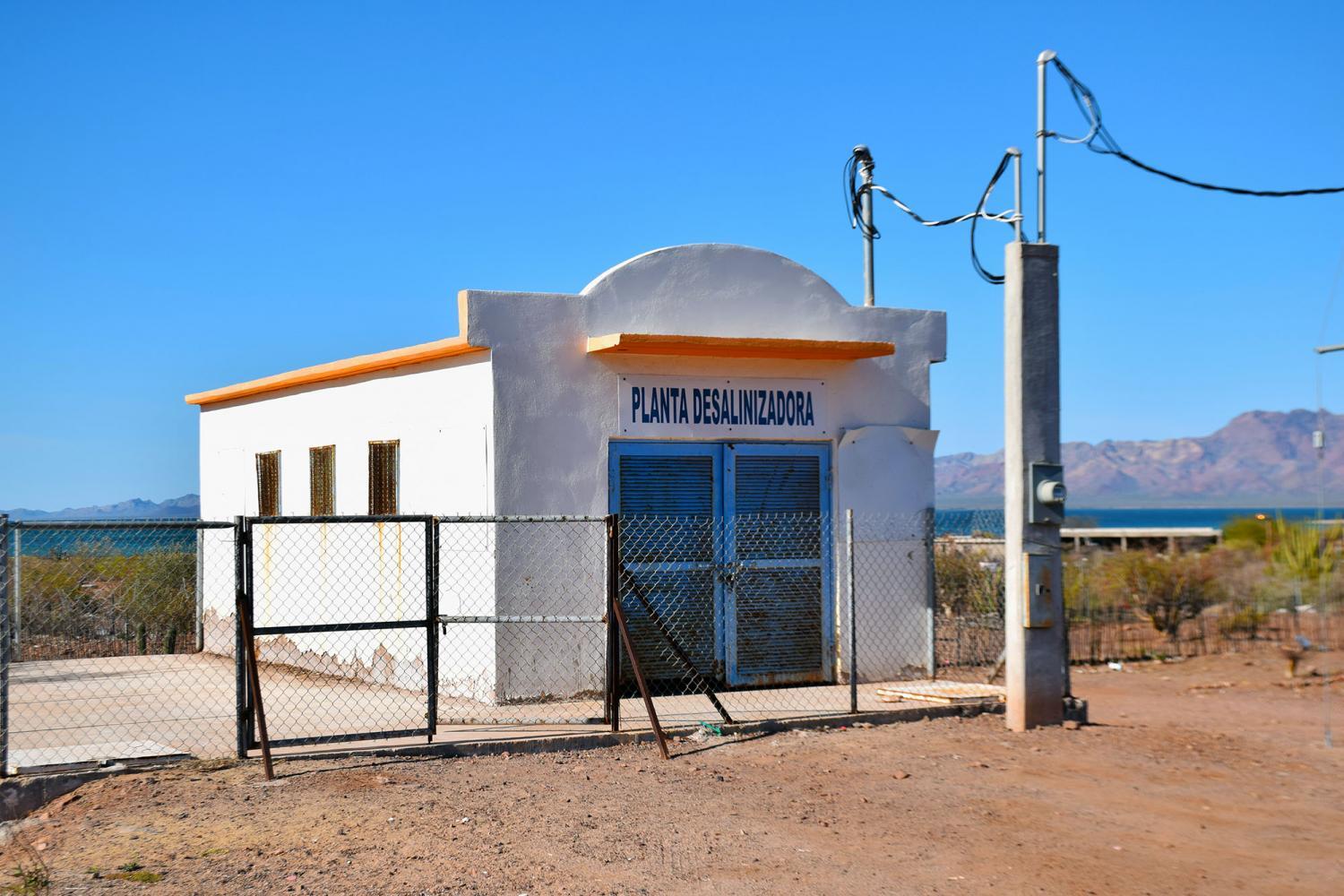 Kendal Blust/KJZZ
The desalination plant in Punta Chueca, which is nearly 15 years old, often stops working, but even when operational cannot provide enough water for the entire community. 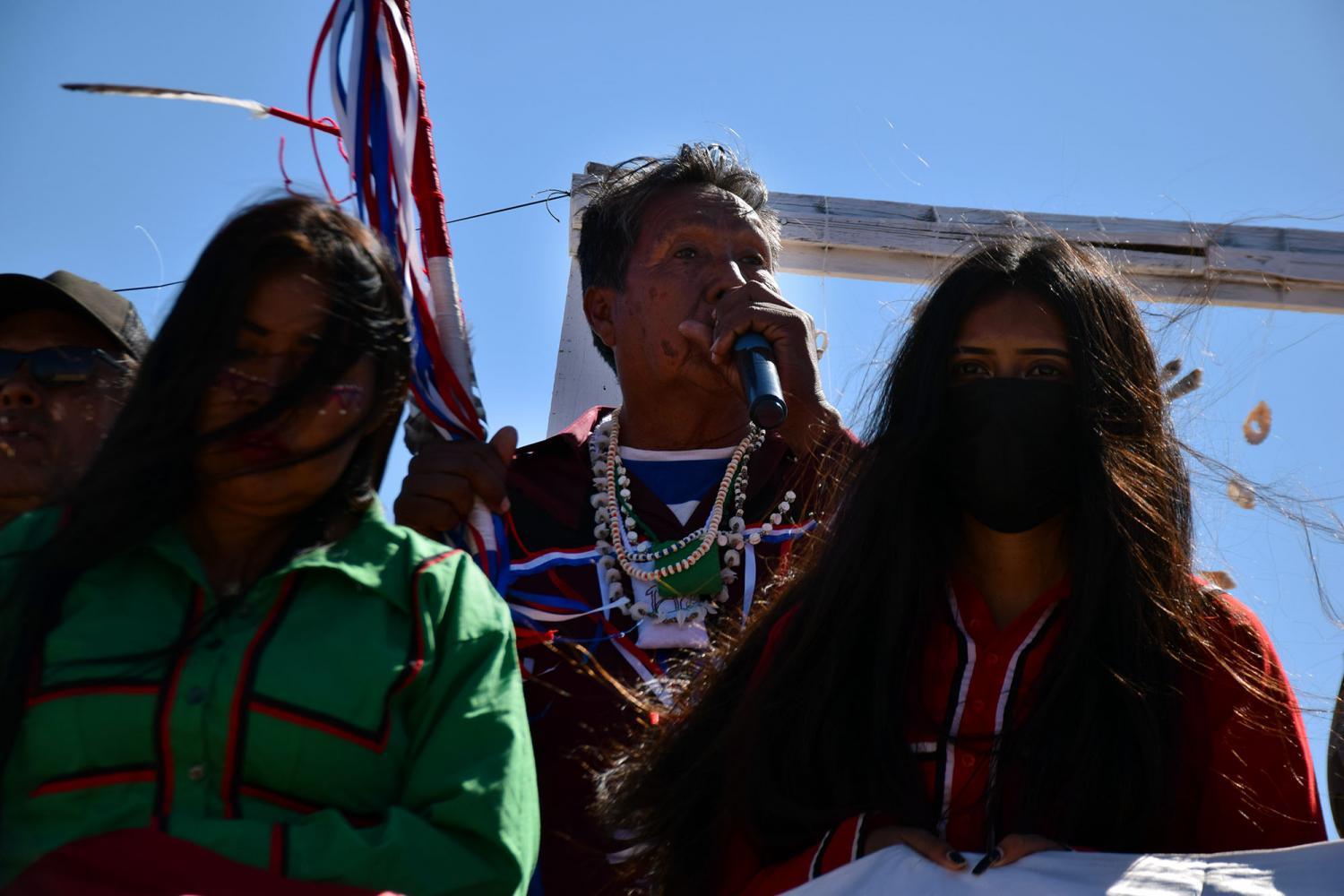 Kendal Blust/KJZZ
Enrique Robles, president of the Comcaac Council of Elders, speaks to members of the nation gathered in Saaps, Sonora, on March 27, 2021, to demand water for their people.
Fronteras Sonora Sustainability The ShowTribal Natural Resources