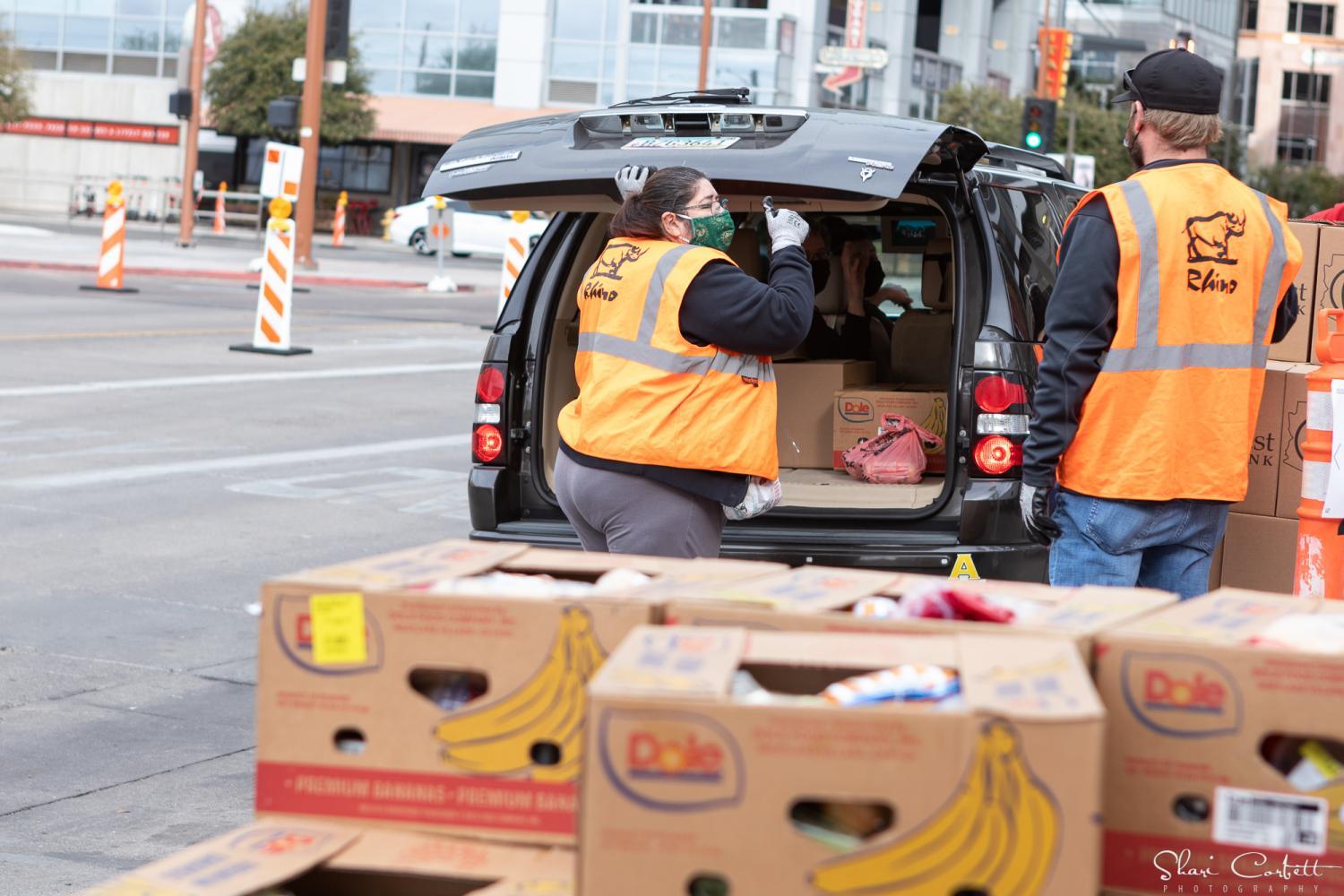 It’s an overcast Saturday at the Talking Stick Resort Arena in Phoenix as cars pull up to volunteers wearing masks and orange vests. They open their trunks and load them up with boxes of food, as rock music blares from a speaker.

It’s a food drive for people who work in the live-event industry — or at least people who used to.

Tiffany Nagy, 24, was a stagehand before the pandemic took her job away.

“We did steel builds, we set up stages, we unloaded and loaded trucks,” she said.

She came through the line in a pickup truck with her boyfriend, Dalton, and their Shih Tzu, Carmella, on her lap.

“With no income and low income, it's been really hard,” Nagy said. “I'm trying to make it. And so I'm really thankful for the food drives.”

She said getting a box of food and other essentials — like toothpaste and laundry detergent — really takes some of the financial pressure off. Between accountants, production managers, HR people, and more, Nagy said people often do not realize how many are employed by the live-event industry. 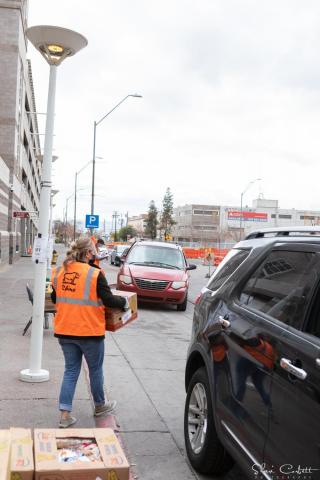 Shari Corbett
Jenna Craig, a furloughed accountant with Tempe-based Rhino Staging and Event Solutions, loads a box of food into an industry workers vehicle. Volunteers from Rhino help run the food drive, and Craig sees many of her co-workers come through the line.
“There is so much in stage production,” she said. “It's a huge industry that got taken away and killed out a lot of jobs.”

The contactless food drives happen about twice a month, and they’re organized by the Phoenix-area-based nonprofit, Musically Fed.

“There's 12 million in the entertainment industry that lost their gig — 12 million,” said Maria Brunner, the organization’s founder and director. “So this is not a small thing.”

Brunner started the organization in 2016 when she realized how many military veterans across the country were hungry and how much food is wasted at big music events. Since then, they’ve fed thousands of people with leftover catering from massive tours like U2 and Fleetwood Mac. But when COVID-19 wiped out tours, Brunner—who’d been in the music industry for more than 30 years — realized it was the people that worked at these events, who were suddenly in need.

“I got a call on my office phone. It was a male and he said, ‘I know you have food, I see you backstage,’” Brunner recalled. “Two nights later, a woman left a similar message saying, ‘We're gonna be in desperate straits here.’”

In Phoenix, Maria works with a local food bank that gets unwanted but still perfectly edible food from grocery stores across the Valley. But she’s organized food drives for industry workers all across the country — in Tucson, Nashville, Atlanta and Los Angeles. She said a lot of live-event workers are contractors, so it’s harder for them to get unemployment benefits.

Jenna Craig was an accountant with Tempe-based Rhino Staging and Event Solutions, before she was furloughed. They told me they had around 400 employees in Arizona before COVID-19 hit. Now, they have 70. Volunteers from Rhino like Jenna run the food drive — lifting boxes and registering recipients.

“All of them have families,” Craig said. “It's hard to see people struggle.”

She sees a lot of her former coworkers come through the line. The boxes are filled with assorted meats, snacks, vegetables, and are designed to feed a family of four for two weeks. They’re a lifesaver for people like Slyvia, a 71-year-old grandmother who asked only to be identified by her first name. She came through the line in a minivan with her daughter.

“I'm barely making it with what I got. All my life savings is gone, practically gone,” she said.

Sylvia did the laundry for touring acts and their crews. But since COVID-19 came she lost her job, and so did her three children who had to move in with her. Now, there are 15 people living in her house.

“There are the nine grandkids,” she said. “They sleep in the living room. It's a three-bedroom house.” 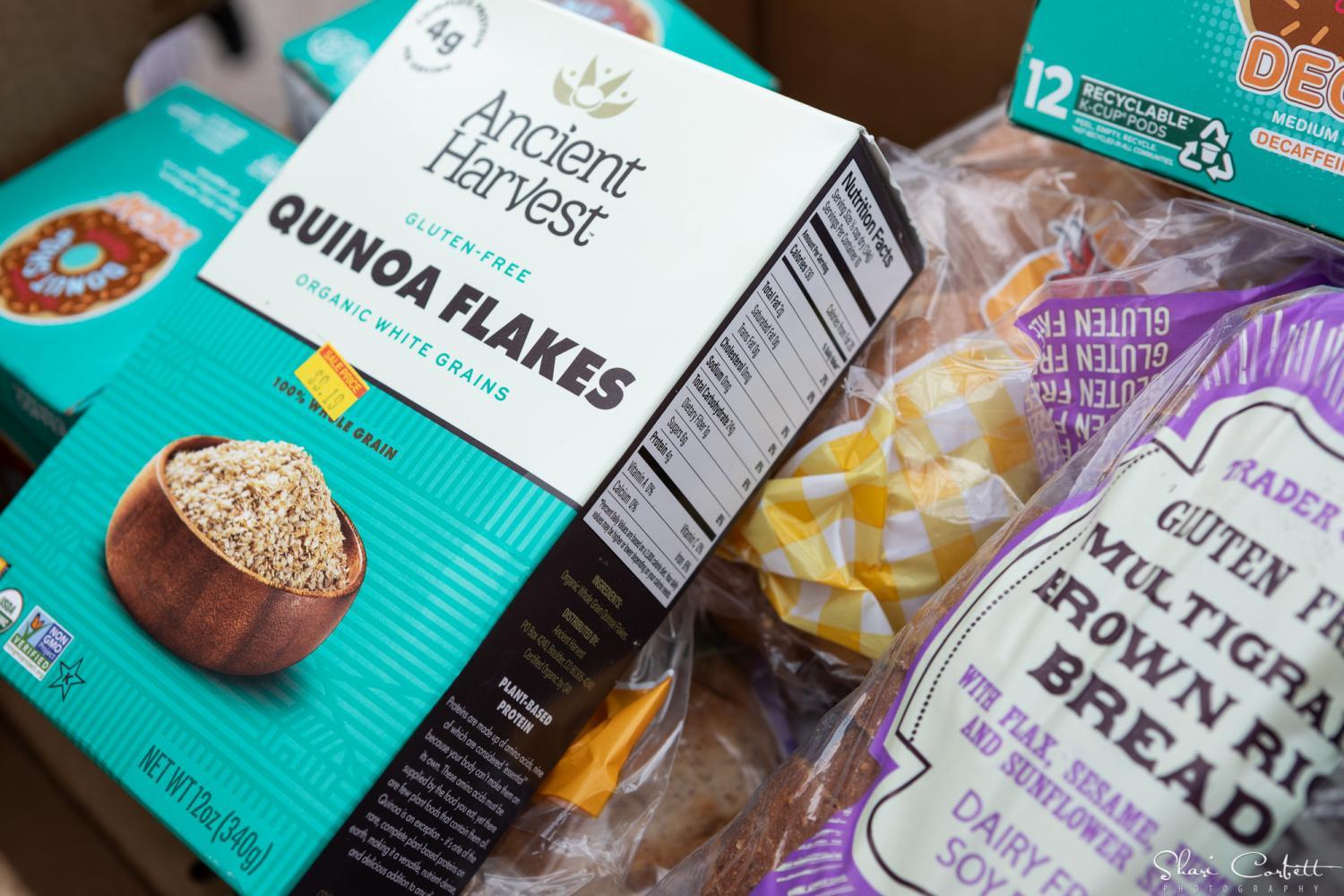 Shari Corbett
The boxes of food are designed to feed a family of four for two weeks.

Like so many, Slyvia has struggled to get unemployment because she’s self-employed. She’s doing her best to get her and her family through the pandemic, and for them the boxes make a huge difference.

With the food drives, Maria Brunner and the people at Rhino are doing what they do best, what they’ve always done: using their creativity to organize and execute an event. And as long as crowds are dangerous, they plan to keep doing the food drives across the United States. They all hope to get back to working at concerts soon.

This story was adapted from the original Hear Arizona podcast series State of the Arts Arizona, now available on Apple Podcasts, Spotify or wherever you get your podcasts.