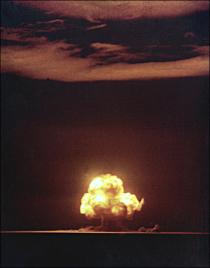 LOS ALAMOS, N.M. — The 70th anniversary of the U.S. government's test of the first atomic bomb over a remote stretch of New Mexico desert comes amid renewed interest in the secret World War II project, thanks to new books and a television drama series.

It also comes as residents of the historic Hispanic village of Tularosa say they were permanently affected by the Trinity Test and want the government to acknowledge it.

On July 16, 1945, scientists from the then-secret city of Los Alamos successfully exploded the first atomic bomb at the Trinity site, near Tularosa.

Tina Cordova, co-founder of the Tularosa Basin Downwinders, said the aftermath later caused rare forms of cancer for many who lived nearby.

In recent years, interest has grown around the building of the bomb with the WGN America drama "Manhattan" and new federal legislation to create the Manhattan Project National Historical Park.