Call Of The Wild: Record Number Of Sandhill Cranes Winter In Arizona This Year

TOMBSTONE — You can hear their cacophony long before you can see the sandhill cranes at Whitewater Draw Wildlife Area. It’s a thunderous clacking as thousands of the big birds trumpet back and forth.

As the sun sinks, wave after wave of the migratory birds glide gently to the wetlands below, wings outstretched like paragliders. They roost overnight in these wetlands, about 30 miles southeast of Tombstone, safe from coyotes, after a day spent socializing and foraging for grain in nearby fields.

Every year, hundreds of thousands of sandhill cranes fly south from northern North America to the southern U.S. to winter in warmer climates, including Arizona, New Mexico and Texas. This year, a record 47,000 cranes were recorded in mid-January between Whitewater Draw and the nearby Willcox Playa, which is a dry lake most of the year. The record it broke had been set in 2010.

Margo Macartney drove to the draw from Bisbee with a friend to watch the sandhill cranes return for the evening.

“I thought it was a motor or something,” she said, recalling the racket of the cranes. “Then I looked up. The sky was black with birds. They all landed in different places.”

Macartney sat by herself and watched in awe.

“This is kind of like Burning Man for the birds,” she said. “They all come together and then they go from one group to another … it’s really interesting just sitting and watching them.”

She isn’t the only one to make the trip to Whitewater Draw to see the throng. Thousands of people have come to see the cranes since they began arriving in October. 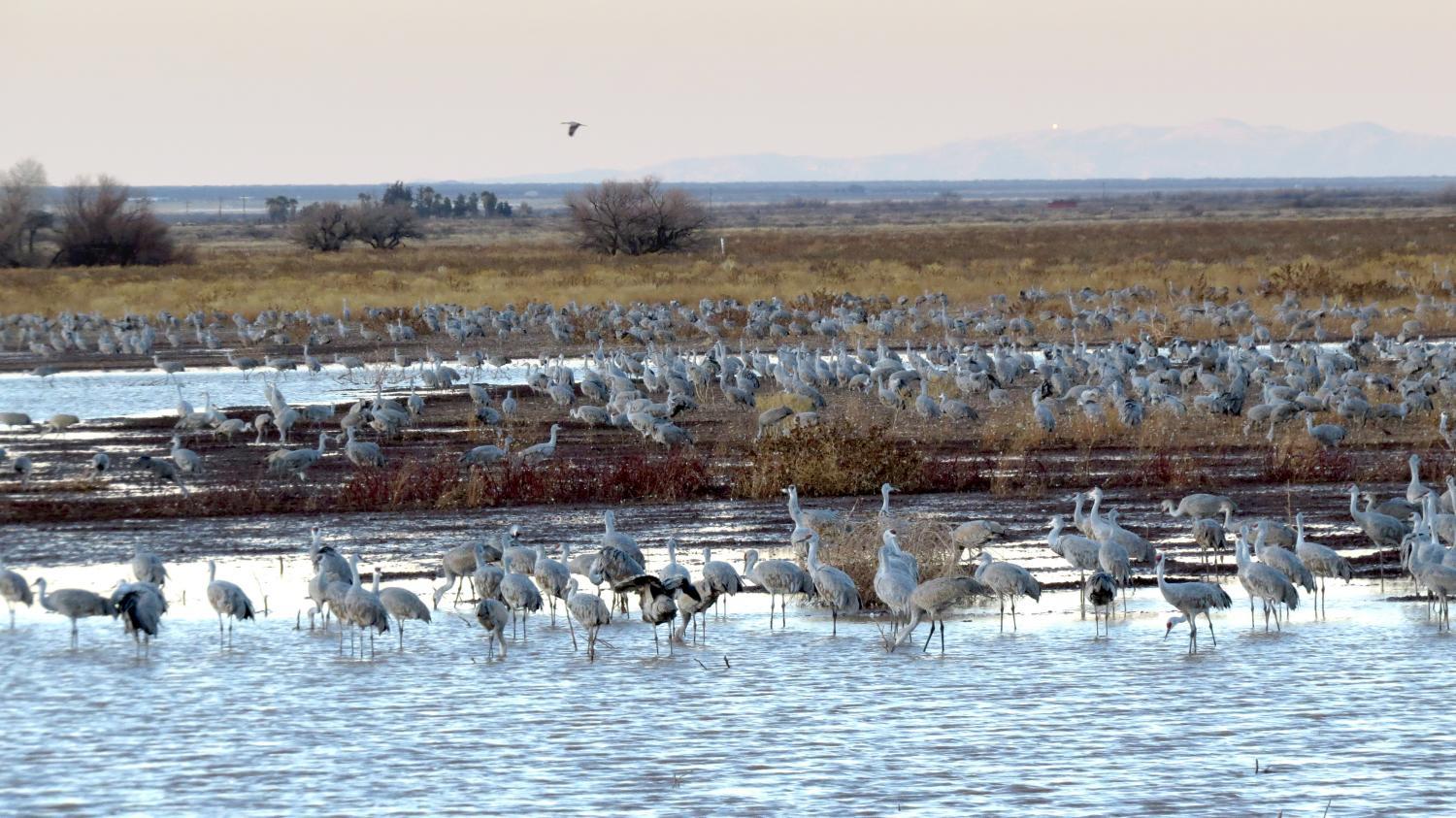 Elaine Jones
Sandhill cranes begin arriving in southeastern Arizona in October, and many stay until the end of March before flying to cooler climates.

Signs at the draw, which is run by the Arizona Game and Fish Department, remind people to keep physically distanced from others and to wear masks because of the COVID-19  pandemic. Others watch the cranes on the 24-hour webcam the Game and Fish operates at the draw.

This area is a vast, shallow wetland, perfect for a variety of birds, reptiles and mammals, but there wouldn’t be any water there if it weren’t for Game and Fish, which bought the former ranch land in 1994. Every year, it pumps groundwater onto the land to create the wetlands, said Mark Hart of the department’s Tucson office. But it’s not to feed the cranes.

“What they're doing out there is, they're not fishers. They're actually evading coyotes,” Hart said. “The coyotes won't venture out in the water to get them.”

The sandhill cranes, which date back to the Pleistocene Epoch about 2.5 million years ago, spend the night standing on their stilt-like legs. The birds are about 5 feet tall and weigh 10 pounds.

“They're ungainly on the ground but graceful in the air, with up to a six-foot wingspan,” Hart said, adding that the cranes also are energetic, graceful dancers during mating rituals. 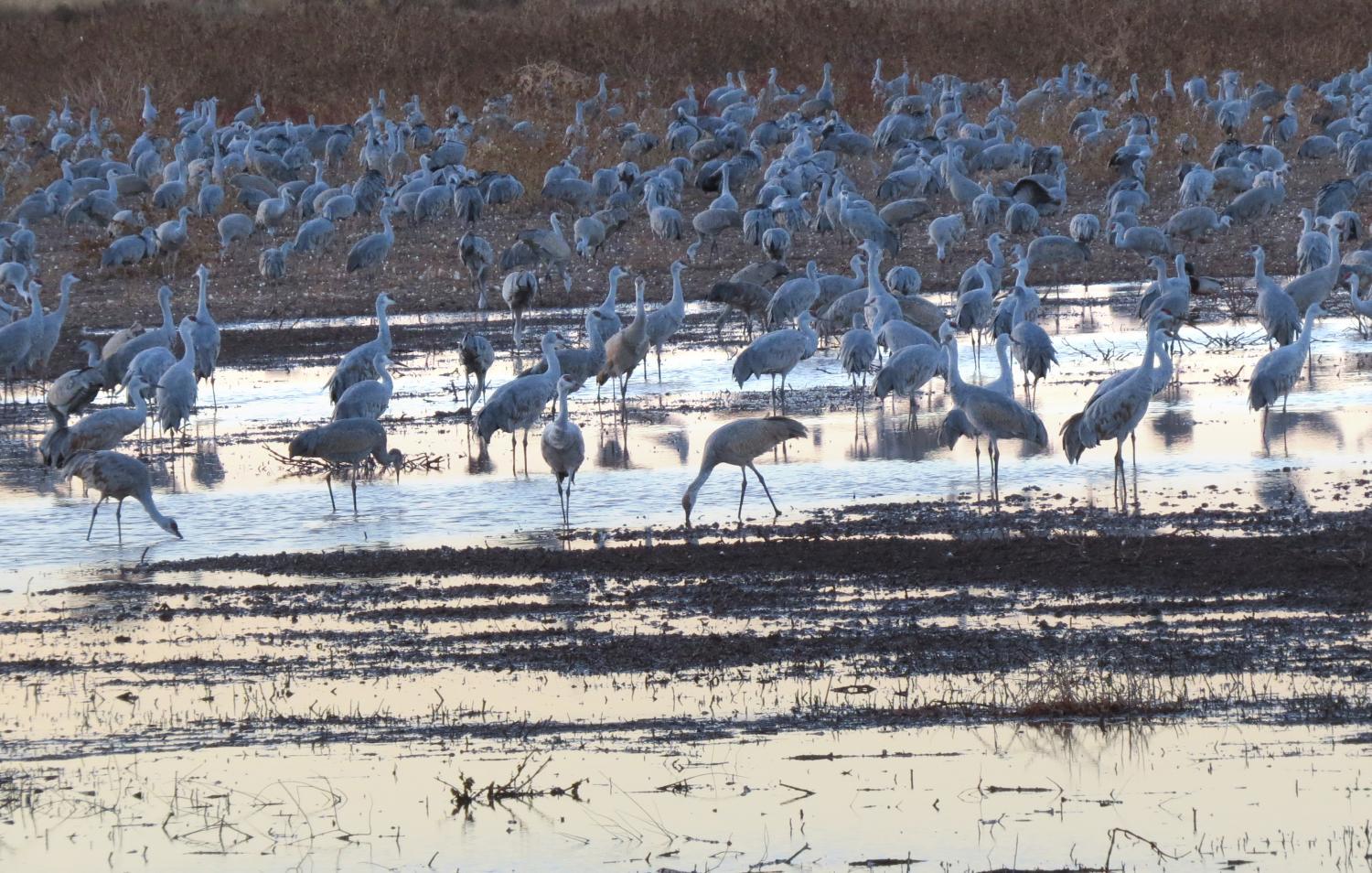 Elaine Jones
Sandhill cranes leave Whitewater Draw Wildlife Area about dawn each day to forage for grains in nearby fields. They return to the draw every night to roost in the wetlands, which protects them from coyotes.

According to the Game and Fish, sandhill cranes wintering in southeastern Arizona have “increased dramatically since the 1950s.” That’s likely due to abundant corn left in nearby fields after harvest.

Hart speculates that spotty rainfall last year played a role in why so many birds showed up at the draw and playa this year.

“We just got the right amount of rainfall in the Sulphur Springs and Gila River valleys for it to be attractive for the sandhill cranes,” Hart said.

As the sun slips closer to the horizon, an estimated 20,000 cranes prepare to settle in for the night. This is the golden hour, when the draw is gift-wrapped in warm hues and the water ripples in a steady wind; feathers are backlit by one last burst of light.

You can still see the sandhill cranes through mid- to late March at Whitewater Draw, although thousands of these birds have already left the draw. By the end of March, it and the Willcox Playa will fall silent after the birds leave before the summer swelter arrives.

Sadie Babits is a freelance journalist and a professor of practice and sustainability director at Arizona State University's Cronkite School of Journalism and Mass Communication. 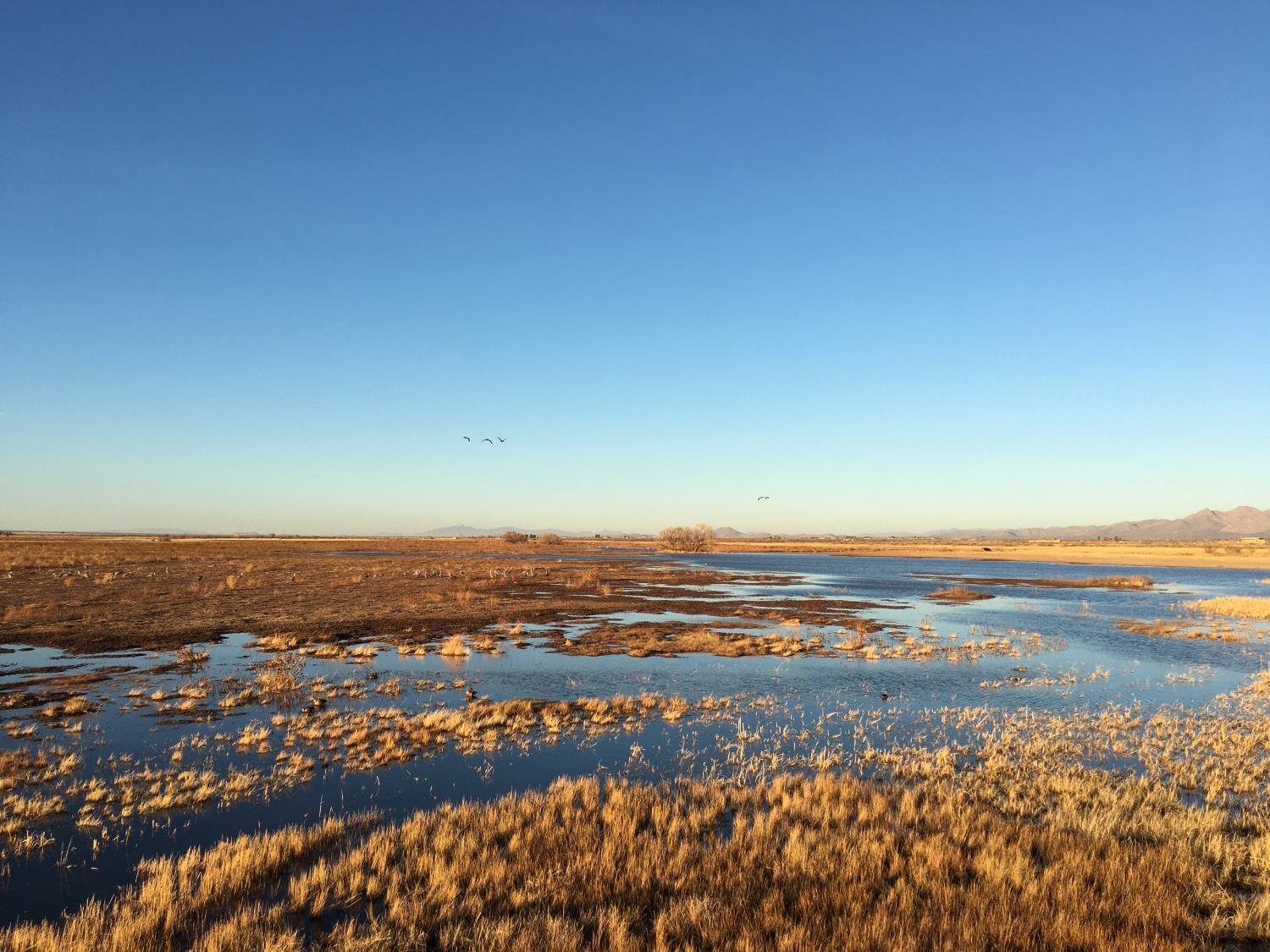