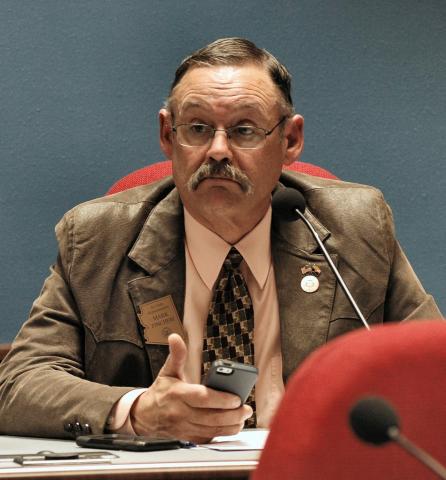 Upping the stakes in what has become a political feud over the 2020 election, Rep. Mark Finchem (R-Oro Valley) is suing a Democratic lawmaker charging she "smeared" his name.

The lawsuit filed in Yuma County Superior Court says that the Rep. Charlene Fernandez (D-Yuma) knew or should have known that there was no evidence linking either Finchem or now former Rep. Anthony Kern (R-Glendale) to the Jan. 6 riot and breach of the U.S. Capitol. Yet Fernandez, along with other Democratic lawmakers, sent a letter to the FBI and the Department of Justice asking that they investigate the pair who were in Washington for the event.

More to the point, Finchem and Kern, through their attorneys, contend that Fernandez knew the allegations they had helped stir up protesters were false or that she made them "in reckless disregard of their truth or falsity.: That is a critical point as the U.S. Supreme Court has ruled that public figures cannot sue over simple negligence or even false statements. Instead, they have to show "actual malice."

The lawsuit seeks unspecified monetary damages as well as a court order requiring Fernandez "to publish a full retraction of the false and malicious allegations" in that letter to the federal agencies.

A spokesman for Fernandez said she has not yet been served with the complaint and has no comment.

Neither Finchem nor his attorneys would say why he is suing only her and not any of the other 42 legislative Democrats who signed the letter. But the lawsuit says that Fernandez has a "prior history of making disparaging comments" about Kern. That included accusing him of being vindictive in his decision, as chairman of the House Rules Committee, to "hold" bills which prevented them from going to the full House for a vote and for calling for his removal from that post.

The lawsuit is in some ways a repeat of the ethics complaint that Finchem filed last month against the Democratic lawmakers for sending the letter to the federal agencies. Rep. Becky Nutt (R-Clifton) tossed that out saying nothing in his allegations was a violation of House ethics rules. But it also is a new opportunity for Finchem and Kern to resurrect their original allegations — all unproven —  that there were "irregularities" in the election of Joe Biden and that social media sites like Twitter and Facebook quashed harmful stories about Biden's son, Hunter, and his laptop that contained documents about his business dealings.

That combined with their belief there were problems with the integrity of electronic voting systems and what they claimed were "mysterious changes in swing states" of vote tallies on election night.

All that is why they said there were "ample grounds" to challenge the outcome of the race and why they went to Washington on Jan. 6, the day Congress was to certify the electoral vote. Both, however, said they did not instigate any violent activity. Yet in the letter to federal agencies, Fernandez and others said there was evidence they "actively encouraged the mob, both before and during the attack on the Capitol" and that they "encouraged, facilitated, participated and possibly helped plan this anti-democratic insurrection."

"Defendant thus falsely accused plaintiffs of being directly involved in, or of aiding and abetting, the crimes of terrorism, insurrection, treason, and sedition" or at least of having conspired to commit them, the lawsuit says. "Such crimes are punishable by death."

That pair's beliefs about what happened in the 2020 election all relate back to why they're suing Fernandez. The lawsuit says she has "advocated for expanding vote by mail and other measures that render our state's elections more vulnerable to fraud." And it says she has "opposed and sought to defeat measures supported by plaintiffs to enhance election integrity in our state."