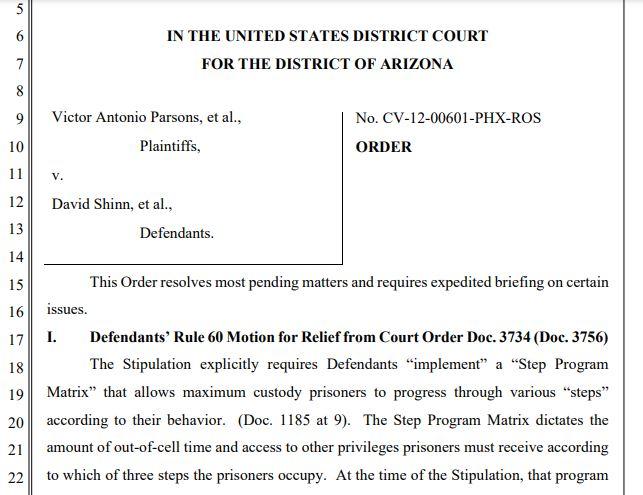 A federal judge has once again held the Arizona Department of Corrections in contempt for providing poor health care in state prisons.

In a 2015 settlement, the Department of Corrections agreed to a set of health care standards called performance measures that were meant to increase the quality of care in state prisons.

But six years later, the department has failed to meet those standards.

The department contracts with private prison health care provider Centurion of Arizona to address the medical needs of the more than 30,000 inmates in state-run prisons.

The state attempted to blame a transition from the previous provider, Corizon Health, as a reason for ongoing problems, but Silver did not buy the excuse.

"There is no explanation why defendants, with advance notice, did not inform the court of their difficulties,” Silver wrote. “Nor do defendants point to evidence establishing sufficient efforts were made to secure alternative outside health care providers."

“The benchmarks that ADC failed cover a wide range of requirements regarding timely access to medical care at multiple prisons,” she said.

Kendrick says the fines were from a review of just one month in 2019.

In her order, Judge Silver raised the possibility of millions of dollars in additional fines, should the Department fail to bring other performance measures into compliance.

Based on a review of records submitted to the court, Kendrick thinks the state could be potentially facing an additional $17.2 million in fines.

This is the second instance in less three years of a federal judge finding the Department of Corrections to be in contempt and levying a fine against it of more than $1 million.

Judge Silver said the money from both fines would be used for “a system-wide staffing analysis performed and implemented as soon as possible.”

“Funds paid as sanctions will be ordered to complete a systemic analysis of the adequacy of the health care provided to class members,” Silver wrote. “The parties shall agree upon an expert to complete the analysis or each submit two proposed experts. The Court will then appoint an expert from the parties’ submissions or appoint another person the Court deems qualified.”

Judge Silver’s order also touched on several other long-standing issues in the Parsons lawsuit, including what plaintiffs have referred to as "drive by mental health encounters.” Attorneys for the inmates previously filed records to the court showing mental health care encounters for some patients lasted only a few minutes.

A spokesperson for the Department of Corrections said its attorneys were reviewing the ruling.