According to Arizona Department of Corrections whistleblowers, hundreds of incarcerated people who should be eligible for release are being held in prison because the inmate management software cannot interpret current sentencing laws.

KJZZ is not naming the whistleblowers because they fear retaliation. The employees said they have been raising the issue internally for more than a year, but prison administrators have not acted to fix the software bug. The sources said Chief Information Officer Holly Greene and Deputy Director Joe Profiri have been aware of the problem since 2019.

The Arizona Department of Corrections confirmed there is a problem with the software.

As of 2019, the department had spent more than $24 million contracting with IT company Business & Decision, North America to build and maintain the software program, known as ACIS, that is used to manage the inmate population in state prisons.

One of the software modules within ACIS, designed to calculate release dates for inmates, is presently unable to account for an amendment to state law that was passed in 2019.

Senate Bill 1310, authored by former Sen. Eddie Farnsworth, amended the Arizona Revised Statutes so that certain inmates convicted of nonviolent offenses could earn additional release credits upon the completion of programming in state prisons. Gov. Ducey signed the bill in June of 2019.

But department sources say the ACIS software is not still able to identify inmates who qualify for SB 1310 programming, nor can it calculate their new release dates upon completion of the programming.

“We knew from day one this wasn’t going to work” a department source said. “When they approved that bill, we looked at it and said ‘Oh, s---.’” 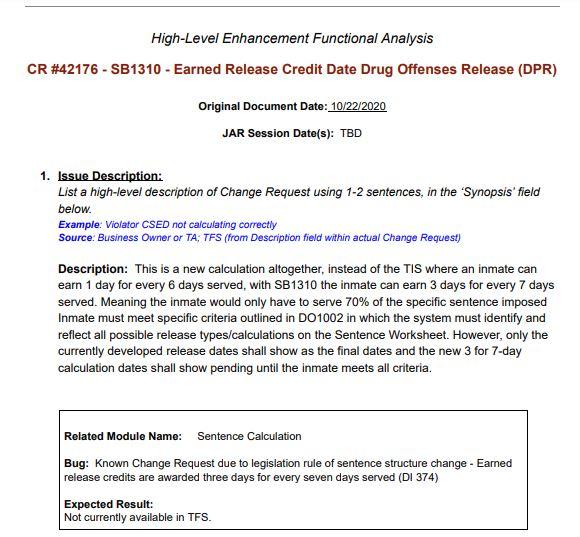 “Currently this calculation is not in ACIS at all,” the report states. “ACIS can calculate 1 earned credit for every 6 days served, but this is a new calculation.”

Instead of fixing the bug, department sources said employees are attempting to identify qualifying inmates manually.

Arizona Department of Corrections spokesperson Bill Lamoreaux said the department has been able to identify 733 inmates that are potentially eligible to take part in the early release programming, who are not currently enrolled in a program.

“ADCRR is prioritizing those eligible for this type of release,” Lamoreaux said, “and will put them in program spaces as soon as an opening becomes available based on release timeline.”

But sources say the department isn’t even scratching the surface of the entire number of eligible inmates.

“The only prisoners that are getting into programming are the squeaky wheels,” a source said, “the ones who already know they qualify or people who have family members on the outside advocating for them.”

Even if inmates are identified and they are able to complete the required programming for SB 1310 releases, department sources say the software is preventing the prisoners from getting the time they deserve taken off their sentences.

“We can't find people to get them into the programs, and after they complete the programs, we still can’t get them out the door,” a source said. “These people are literally trapped.”

Lamoreaux said “ADCRR is working with the vendor to update the software with the methodology and logic programmed for this new release criteria.”

In the meantime, Lamoreaux confirmed the “data is being calculated manually and then entered into the system.”

Department sources said this means “someone is sitting there crunching numbers with a calculator and interpreting how each of the new laws that have been passed would impact an inmate.”

“It makes me sick,” one source said, noting that even the most diligent employees are capable of making math errors that could result in additional months or years in prison for an inmate. “What the hell are we doing here? People’s lives are at stake.”

'Just The Tip Of The Iceberg'

While the problems with sentence calculations are concerning, department sources say those programming issues are “just the tip of the iceberg.”

According to the sources, the entire inmate management software program, known as ACIS, has experienced more than 14,000 bugs since it was implemented in November of 2019.

“It was Thanksgiving weekend,” one source recalled. “We were killing ourselves working on it, but every person associated with the software rollout begged (Deputy Director) Profiri not to go live.”

But multiple sources involved in the rollout said they were instructed by department leadership to “not say a word” about their concerns. “We were told ‘We’re too deep into it — too much money had been spent — we can’t go back now.’”

“We have put people in cells together who are in conflicting gangs without realizing it,” a source said. “We can’t keep the right medication with seriously ill inmates when they are transferred to a new unit. We’re putting people in danger. It’s only a matter of time before someone gets killed or dies.”

The sources said the ACIS software also makes it difficult for employees to correct errors once they have been identified.

“In one instance there was a disciplinary action erroneously entered on an inmate's record,” a source said. “But there's no way to back it out. So that guy was punished and he wasn’t able to make a phone call for 30 days. Those are the kinds of things that eat at you every day.”

“We have a couple modules they spent millions of dollars on that we can’t use at all,” a department source said. “The program that tracks inmate property is not working. So they went back to the old fashioned way of tracking it by hand with paper because the software wasn’t doing what it was supposed to.”

The ACIS software system replaced an older program called AIMS that had been in operation for more than three decades. According to a 2019 presentation to the Joint Legislative Budget Committee, the Department of Corrections has spent more than $24 million replacing the inmate management system. A department spokesperson testified that requirements for the project were poorly scoped from the beginning, resulting in a contract that went millions of dollars over budget. 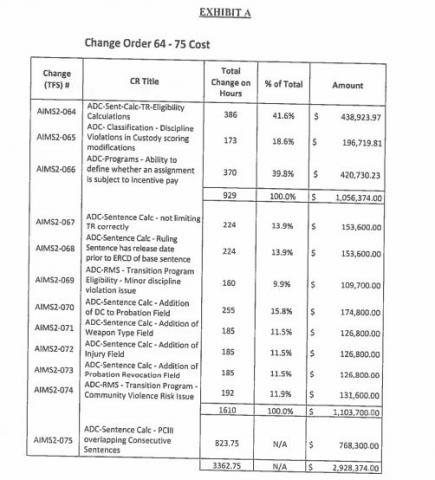 A 2020 audit of the Department of Corrections by the Arizona Department of Auditor General found nearly $1 million in unreconciled inmate trust accounts. According to the audit, the department blamed the unresolved accounts on the transition to the new software system.

“During the data migration from AIMS, a lot of records that should have not been transferred to the new system did, causing complications and a lot of manual work to resolve the conversion issues,” the audit states. “As with any new system, the lack of enough knowledge and experience of the staff, led to posting errors that additionally delays and complicates the reconciliation process.”

One department whistleblower said the number of problems with the ACIS system was unprecedented in their professional experience. “I have never in my life run across an application like this,” they said. “It’s just been one big cluster.”

All of the sources that spoke to KJZZ emphasized the need for more programming hours from the vendor that could be used on maintenance and support.

“When they legislate these things, they need to be appropriating enough money to make sure they work,” a source said. They estimated fixing the SB1310 bug would take roughly 2,000 additional programming hours.

There are currently several bills in the Arizona Legislature that would expand eligibility for earned release credits to even more inmates than the standard set by SB 1310.

Another source said they were “disgusted” with the way the department has dealt with the software problems. “I’m embarrassed to be associated with people that don't care enough to make these things a priority,” the source said. “It’s absolutely inhumane to keep people in prison longer than they are supposed to be.”

In response to this report, a Department of Corrections spokesperson said claims of inmates being held beyond release dates were false, but admitted the ACIS system "does not currently calculate release dates in accordance with the parameters established by Senate Bill (S.B.) 1310." The department maintains this has not delayed the release of any inmates.