How Newspapers Covered Arizona's Statehood In 1912 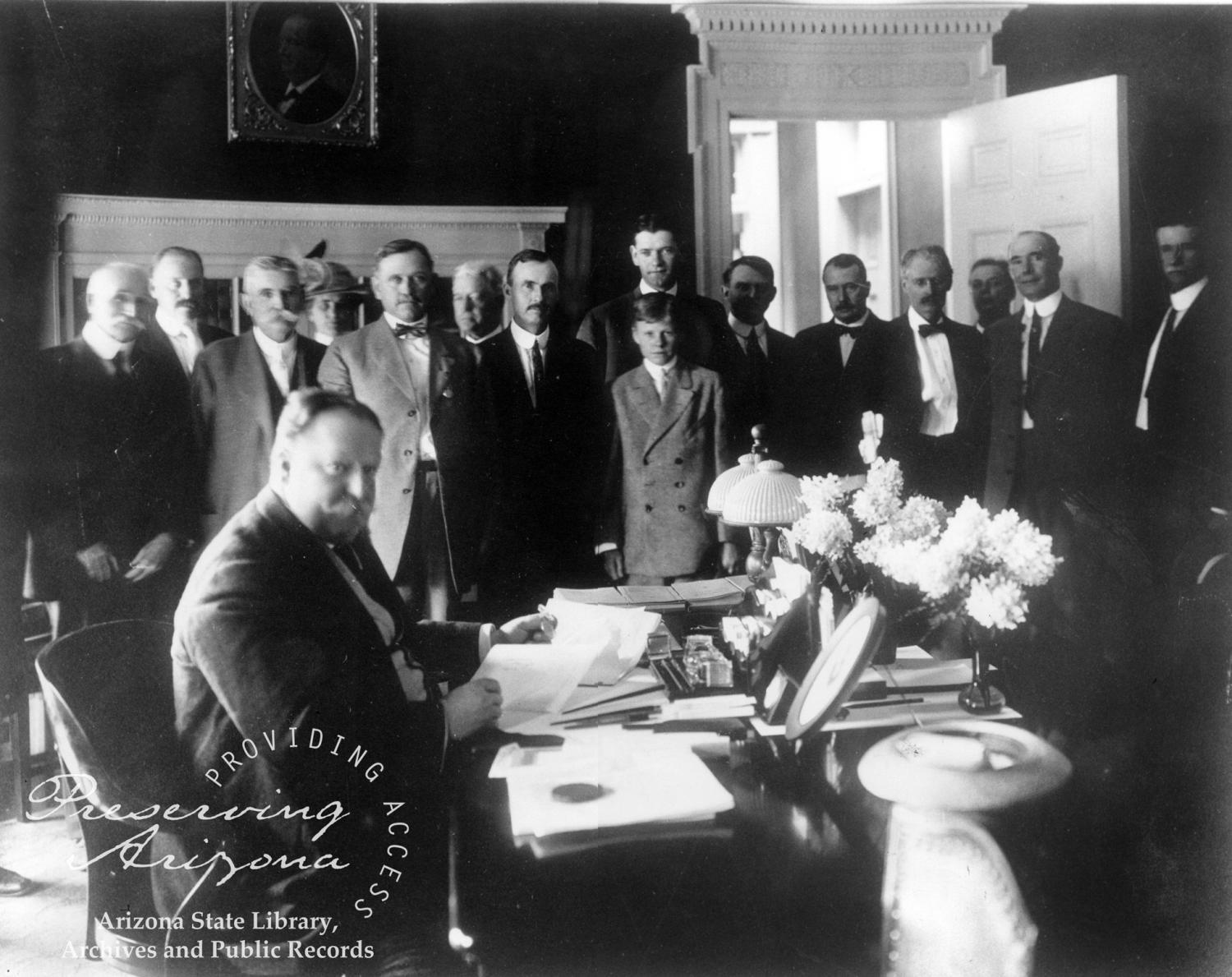 MARK BRODIE: Arizona Statehood Day is on Sunday [Feb. 14] — this year will mark Arizona's 109th as a state. And things were, as you might imagine, a lot different around this time in 1912 than they are today. My next guest says for one, in 1912, there were 16 daily newspapers published in Arizona and 46 weeklies; that was with a population of around 206,000. Today, there are 10 dailies and 59 weeklies published here, with a population of more than 6.6 million. Sativa Peterson is the news content program manager at the State of Arizona Research Library. She joins me to talk about how statehood was covered 109 years ago. And, Sativa, what was the general consensus in newspapers around statehood? What did they have to say about this territory becoming a state?

SATIVA PETERSON: You know, the first thing that kind of stuck out, of course, the newspaper was printed first thing in the morning and the Arizona Republican, which, of course, the Arizona Republic was called the Arizona Republican until about 1930. And so on the morning of Feb.14, 1912, the inauguration has not yet happened. So the headline is "No Luxurious Benzene Buggy for Governor Hunt." And of course, I'm like, "What the heck is a benzene buggy?" So it turns out it's just a gasoline-operated buggy. And Mr. Hunt has said, he said last night that he has previously announced intention of walking to the Capitol on Inauguration Day was made seriously and he intends to stick to it. And this really becomes a trend. Like many of the papers throughout the state describe the inauguration ceremony as simple. The Winslow Mail in Winslow, Arizona, describes it as having a Western simplicity. And this is kind of in contrast to the way that people themselves were feeling. I mean, a lot of the newspapers describe them as being jubilant.

BRODIE: So in terms of — I want to ask you a little bit about the, the timing of some of these, because, of course, there was no internet, there was no television. So sometimes the news took a little while, especially, I would imagine, in more rural and remote parts of the state. Did you see that news of Arizona statehood — like, could you see sort of like a timeline of when it got to particular areas based on when it appeared on the front page of a newspaper?

PETERSON: Yeah, absolutely. Many of the communities' newspapers were a weekly newspaper, so you might not see an account of Statehood Day until a few days afterwards. So, for instance, I've got an example of that from Tombstone, the Tombstone Epitaph. So it was published on Feb. 18, 1912, so a few days after. And it states that "signing of the statehood proclamation by President [William Howard] Taft was the signal this morning for prolonged ringing of fire bells, blowing of mine and locomotive whistles and numerous dynamite blasts. The occasion was enlivened by the presence of a number of cowboys from the ranges who punctured the air with pistol shots." So it was, it did. Like, if you're doing this kind of research, you often have to look at the days around the event because many of our communities just had weekly newspapers at that time. And I would say that, you know, as I said, it was described as the ceremony was strikingly simple, that George W. P. Hunt walks for about a mile up Washington Street. But in contrast to that, people are driving around in street cars, you know, with flags and bunting. But the Capitol itself was apparently pretty devoid of decoration, except for a state flag.

BRODIE: Does it seem as though different parts of the state reacted to statehood differently?

PETERSON: So, yeah, there were different trends. So, for instance, you know, the Tombstone Epitaph, it uses this very flowery language. It printed the image of a star and it says, "The star of Arizona, the last to be added to the flag. May her course be ever onward and upward. May her glory always remain undimmed, her luster untarnished, and may the flag to which this splendid star has now been added float forever over free men is the fervent wish and hope of the Epitaph." So, you know, quite flowery. And then the Bisbee Daily Review in its coverage, it talked about something very interesting to me. It says, "When the governor and his escort arrived on foot, the lawn and flower-lined walks of the Capitol grounds were crowded with cheering Arizonans joyous in the first flush of complete citizenship. The large majority of them will this year, for the first time in their lives, cast their votes for a president of the United States."

BRODIE: Well, so how did people celebrate? Like, we've heard about how the governor was, you know, fairly modest and austere in what he was doing? What was the general reaction of Arizonans to this news?

PETERSON: Like I said, in mining towns, there seemed to be a lot of explosion of dynamite. For instance, in Bisbee, they exploded 48 sticks of dynamite at the Copper Queen Cave. There was three events, really — the principal events were the inauguration at the Capitol, and then that was followed by a parade. And then later on, there was a reception at the Hotel Adams. So it's said that people were driving around in carriages and streetcars all day long with flags and bunting on their cars. So I saw one account, a newspaper selling flags for Statehood Day. So you could get a 3 by 5 foot flag for a dollar, so I imagine there was a lot of that going on. We see accounts from Holbrook and Winslow and Douglas and Clifton. So we see all kinds of people celebrating and taking place in parades.

BRODIE: What else was going on around Arizona around that time? Like, what was the fact that Arizona became a state and the inauguration and all that, what was that competing with for coverage in the newspapers at the time?

PETERSON: You know, there's a lot of discussion just generally about the forming of a new state government. So people are concerned with, you know, how they're going to write a new criminal code, and how they're going to create these civil code of law. And they're arguing a lot about railroads. They're talking about whether or not women should get the vote. So these are some of the things that are also appearing in the paper at the time. You know, one of the accounts from the Bisbee Daily News talks about what was happening in [Washington, D.C.] meanwhile, you know. So, "President Taft, at 10 in the morning, attached his name to the proclamation, admitting Arizona into the Union as the 48th and probably last state," he says, you know, the paper says at the time. And it says he used a gold pen. "After he signed the duplicates, which he forwarded to Arizona for filing in the archives of the state, the president looked up smilingly and said, 'Well, there you are.'"

PETERSON: Yeah. They talk about how there are moving picture machines there to make an accurate record for future generations, and that it really seemed, at least in this moment, that now the United States was complete by the addition of Arizona, the 48th state.

BRODIE: All right, that is Sativa Peterson, news content program manager at the State of Arizona Research Library. Sativa, it was really nice to talk to you. Thank you.