Many Navajo Nation Residents Struggle To Heat Their Homes. The Pandemic Has Made It Harder

With many of us spending much more time at home over the last year, the common things we’d do most days — going to work, picking up a few things at the grocery store, running on a treadmill at the gym — have become much less common.
But for those who can work from home or order groceries via an app, the overall effect on our lives hasn’t been extremely dramatic — especially as habits have changed because of the so-called "new normal."

Many residents of the Navajo Nation and members of the Hopi Tribe have much greater challenges. One of those is making sure that those members — especially elders — have enough wood to keep them warm. The reality of COVID-19 made that challenge significantly more daunting, and that has led to a new collaboration called Wood for Life.

Journalist Terry Greene Sterling wrote about the effort for Slate. The Show spoke with both her and Dr. Sophina Calderon, who practices family medicine in Tuba City, Arizona on the Navajo Nation.

STEVE GOLDSTEIN: Terry, some of the areas we're going to talk about are located where we've seen some catastrophic wildfires. What can Wood for Life do to quell that problem while also providing firewood for tribal residents?

GOLDSTEIN: Dr. Calderon, what have you seen? What have you experienced directly in terms of the impact of what Terry described but also the difference this sort of collaboration can make?

SOPHINA CALDERON: So from my end — I'm a family physician, so I see a lot of patients that come from remote areas outside of Tuba City where I practice. And so a lot of patients drive or hitchhike even, over an hour away to be able to get to their medical appointments. And during the wintertime, we have many patients, especially elderly patients, that come into their clinic visits and tell us, "I don't have enough firewood" or "I'm gathering bushes around my house to keep warm." And so it's just a mixed picture of access to firewood in a lot of remote homes. And people who live in remote areas have family that live far from them and a lot of perhaps their children and grandchildren, who would normally be around to help them, actually live and work off the reservation. So they're not exactly present all the time to be able to provide the firewood that's needed for a lot of these people. So I do see a variety of situations, especially among the elderly people and my patients that come into their clinic visits. So prior to COVID, it's been quite variable. And with all of the things that have happened since COVID, the need has been greatly exacerbated by this pandemic. So that's sort of where we stood in terms of developing this linkage to this program to be able to provide firewood on a much grander scale to many families that needed it.

GOLDSTEIN: Just how common is this? You talk about it obviously being worsened by the pandemic, but when you think about how many people are affected by this, this is certainly not an uncommon issue, is it?

CALDERON: No, not uncommon at all. I mean, even prior to the pandemic at baseline, the Navajo Nation has about 30 to 40% of homes that don't have running water or electricity. And even those who do have running water and electricity, their primary source of heating their home is through a wood stove. And we were estimating probably about, just by experience and having grown up here on the western end of the Navajo Nation myself, we were estimating about at least 50% of homes use and depend on firewood to heat their homes. So whether or not they have access to electricity or running water, there's a huge percentage of people here on the Navajo Nation that use firewood. And so typically a lot of families start preparing for the winter season by hauling firewood in late summer months and early fall. And with the pandemic, the gathering time and the lead time for gathering firewood was actually delayed. Typically, my family, we go out during throughout the entire summer and start hauling firewood that we could stockpile to be able to deliver to those who need it by the time winter arrived. And when we go out to gather firewood, we usually see many, many families in the same forest areas with their wood permits gathering firewood. But this past summer during COVID, we didn't see the volume of people that we would normally see out in the forest. So that really brought up to my family the question of what the need would be like and just witnessing how much the pandemic has affected individual families. Family structures were significantly changed, whether that was a family who lost the primary would hauler in their home. And many families lost two to three members to COVID within an immediate family, and just with the loss itself, that just really caused a lot of these families to just really suffer more in terms of having more depression and anxiety and just maybe even a loss of motivation to go gather the firewood and think that far ahead to prepare for the winter. 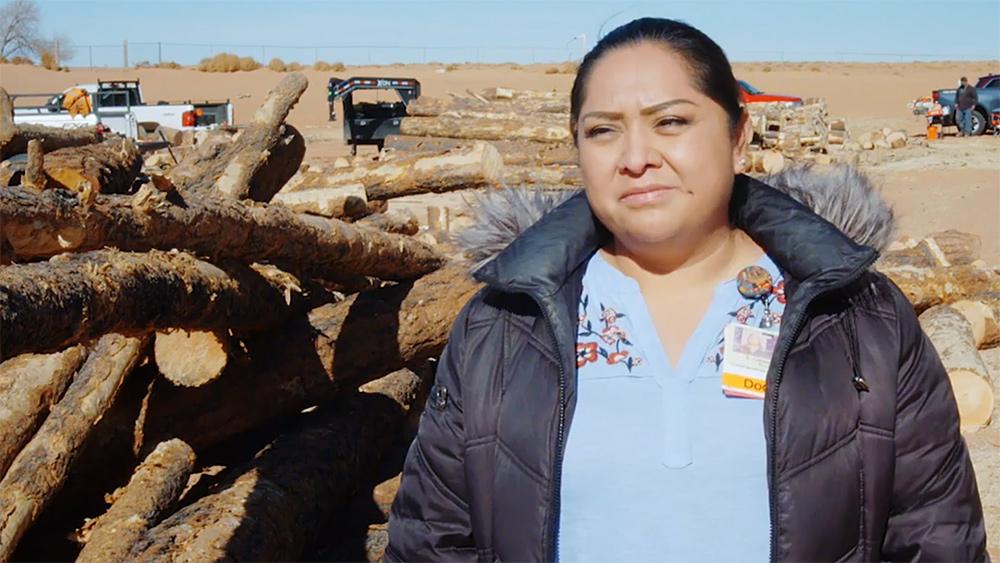 GOLDSTEIN: Terry, I want to get your final thoughts, your piece for Slate ends with the sentence, "She knows how to weather hard times, and things won't always be as tough as they are now — she just feels it." That ends that sort of an optimistic tone. Based on your reporting, did you feel there's reason to be optimistic about that?

GOLDSTEIN: Terry Greene Sterling is a journalist who wrote about Wood for Life for Slate. Dr Sophina Calderon practices medicine in Tuba City, Arizona, on the Navajo Nation.