How ABC15 Linked A Phoenix Police 'Challenge Coin' To Neo-Nazism 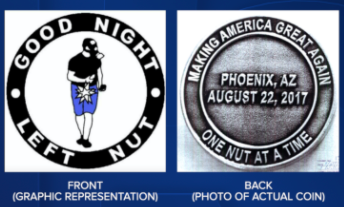 STEVE GOLDSTEIN: The Phoenix City Attorney's Office will be starting an outside investigation into a challenge coin made after a 2017 police incident. The coin was circulated among some officers to note the shooting of a protester in the groin in 2017. The incident happened in the aftermath of a rally held by then-President Trump at the Phoenix Convention Center. This came up as part of investigation by Dave Biscobing called Politically Charged. Biscobing is an investigative reporter with ABC15, and he spoke with my co-host, Mark Brodie, more about what he found.

DAVE BISCOBING: Well, the incident where it happened, this protest in 2017 after this Trump rally in downtown Phoenix, it made a lot of news. And maybe the most memorable part about it was this man who got shot in the groin. What wasn't really known as that officers really relished and celebrated and commemorated that shot. They made these challenge coins. And we thought that was an important thing that people needed to know in itself. But then, unbeknownst to us, the next day, I got some tips from viewers, followers saying, "Hey, you might want to check the messaging on that coin. It has ties to white supremacist, neo-Nazi language. Specifically "Good night, left side," which is to promote violence against people perceived to be on the left of the political spectrum."

Let's make this simple. Here's a pic of the front and back of the challenge coin Phoenix officers possessed after shooting a protestor in the groin.

The third pic is one of many examples how it's related to Neo-Nazi slogan, images. https://t.co/McENZxBJWN pic.twitter.com/ApZm6A6gmI

MARK BRODIE: So what has the response been from Phoenix police, and how has that evolved over the last several days?

BISCOBING: Well, it certainly evolved. The first statement I got in advance of our story used pretty passive language, saying the department essentially couldn't find any misconduct and even used the language "any such coin," as if it was in dispute that such a coin existed. Which was pretty surprising because this information about the coin is from a lawsuit that's still ongoing between Puente, ACLU and Phoenix PD about the protest response way back in 2017. It's in depositions. Their officers admitted to having it. There are pictures of it that were in the exhibits. So it exists. They know it exists. So that was surprising. Then we aired the story, and then once the next day, I got information about its ties to this hate speech, I did some fact checking and found, yes, that's true. Notified the city and then it all of a sudden morphed into this, "Oh, yes, this is very concerning. We need to, we need to start an outside, independent investigation of this. This, we can't stand for this. This needs to be looked into." And I would like to add one other thing. Chief Jeri Williams was shown pictures of this coin in August 2019. She knew. She saw it. She was questioned about it. And so that is something that needs to be addressed, and we have additional questions about that.

BRODIE: Well, right. And interestingly, the law enforcement union — the police union for Phoenix PD — is also now saying they're concerned and they are supportive of this outside investigation, right?

BISCOBING: That's right. They sent out a statement just today saying that they found our reports concerning, and, I mean, rightfully so. I think what's surprising, though, is that this union is such a staunch defender of its officers. And now we're almost seeing this, you know, "Let's, let's kind of step out of the way and let this investigation take its course." And I think that that's an indication of how serious this really is. There is no other side to, no legitimate other side to, to white supremacy, white power, neo-Nazism.

The main union for rank-and-file officers released this statement. pic.twitter.com/IRaalKIF35

BRODIE: So let's take a step back and talk about some of the events that led to what you were originally reporting about — some of the protests over the summer here in Phoenix. You also found that Phoenix PD and the Maricopa County Attorney's Office were basically turning protesters into street gang members?

BISCOBING: 2020 was a very long year for Phoenix police and law enforcement across the country. I don't think there's any denying that. They had to respond and manage dozens, sometimes hundreds of different protests of varying sizes throughout the year. But this case really stood out to us. We're going to be investigating other cases, and we'll have reports coming up about other controversial cases, but this one is perhaps the most controversial in that they had protesters who are out marching in the streets. Yes, they're toppling construction cones or street signs, that they released a toy smoke maker. And this is all done to annoy and slow the, really the large convoy of officers that greatly outnumber them behind them. But after they arrest them this one night, they go into a grand jury, and it's the guy that runs the same team of officers who kept this challenge coin. And they say some really hard to believe — and in some cases, completely false information about the group and what happened that night. And one of the most shocking bits of testimony is that they compared this group of 17, 18 individuals as a criminal street gang that is as dangerous and in some ways more dangerous than gangs like the Crips, Bloods and Hell's Angels. Now, those groups have committed thousands of homicides in their history. This group is marching in the street carrying umbrellas. To even make the comparison is pretty astounding, let alone to charge this group is a gang based on very broad statutes, which essentially means that if you shout — well, they shouted, "All cops are bastards." And they wore black mostly during this protest and most of them carried umbrellas, that those things together make them a gang that they're calling ACAB — or all cops are bastards. And that's, that's a phrase that is universally known that goes back at almost 100 years and is used across the world. It's a phrase, and they're alleging it's a gang.

BRODIE: Have you gotten any response from the county attorney's office as to either why they are doing this, why they're prosecuting these folks in this way, or any update that maybe they're not going to?

BISCOBING: They won't discuss the case publicly. They say that they will not reveal the evidence that they presented to the grand jury or discuss their basis of it. Only that they will not allow violence in their streets and that basically they're putting the responsibility for these charges on the grand jury saying, "Hey, a grand jury found this where charges were acceptable. This is on them." But that kind of misstates the process. I mean, they, the grand jury process is a one-sided, confidential process. So I don't think that they anticipated that the grand jury transcript would be made public and that everybody would have a chance to see exactly what they told the grand jury. And I'm surprised that they haven't addressed these allegations publicly because the public deserves to know what its prosecutors are doing in their name in order to charge people who are protesting as a criminal street gang. And I think internally they're struggling to figure out really what their own facts are. And I think that's something that they're going to have to address, because now that it is public, it is out there. And people deserve to know whether prosecutors are abusing the power of the courts to silence dissent.

BRODIE: All right. That is Dave Biscobing, an investigative reporter with ABC15. Dave, we'll be keeping an eye out for your reporting down the road. Thanks for talking to me today. I appreciate it.

BISCOBING: Thank you so much.