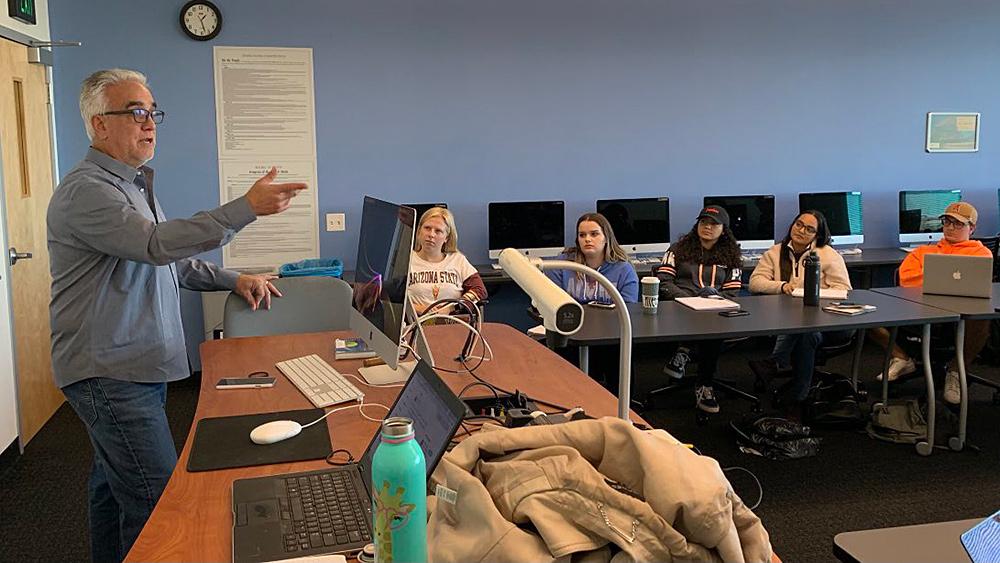 Katherine Fitzgerald/Cronkite News
Pedro Gomez was frequently asked to speak at the Walter Cronkite School of Journalism and Mass Communication, where he mentored many students.

Longtime ESPN baseball correspondent Pedro Gomez passed away unexpectedly at the age of 58. He died at home on Sunday. No cause of death was announced.

In a statement released by ESPN, the Gomez family said, “Pedro was far more than a media personality. He was a dad, loving husband, loyal friend, coach and mentor. He was our everything and his kids’ biggest believer.”

He is remembered as a “fearless and dogged reporter” by the Arizona Republic. He joined the paper shortly before the Diamondbacks played their first-ever game in 1998.

ESPN says that Gomez will be remembered for his coverage of more than 25 World Series and 22 All-Star Games throughout his career. Gomez is probably best-known for being the network’s unofficial Barry Bonds correspondent as the controversial star pursued the sport’s home run record.

The Show spoke with Gomez in September of 2017 after the Diamondbacks clinched a playoff spot, and he explained how he saw the Valley as a baseball town.

"It's difficult to rank it as a top level baseball market. Because, you know, Phoenix is such a transient and newer generation type area," Gomez said. "Look, we've lived here 20 years, my family and my kids are Diamondback fans. But it will take several generations to build up that, you know, you go to a place like Boston, or Kansas City, or Detroit where your father went to games, your grandfather went to games and your great-grandfather went to games — not so much in Kansas City because they're about 50 years old, but still the other cities are, you know, 100, the organizations are over 100 years old. So there, there's a built-in family passing down of the torch of this is our club. We're Red Sox fans. We're Tigers fans. We're Yankees fans, things like that. That's going to take time here. And really, you're going to have to have some winning that goes along with it. And there hasn't been a lot of winning since the World Series. So it's going to take time."

The son of Cuban refugees, Gomez grew up in Miami and attended the University of Miami.

He is survived by his wife, two sons and a daughter.