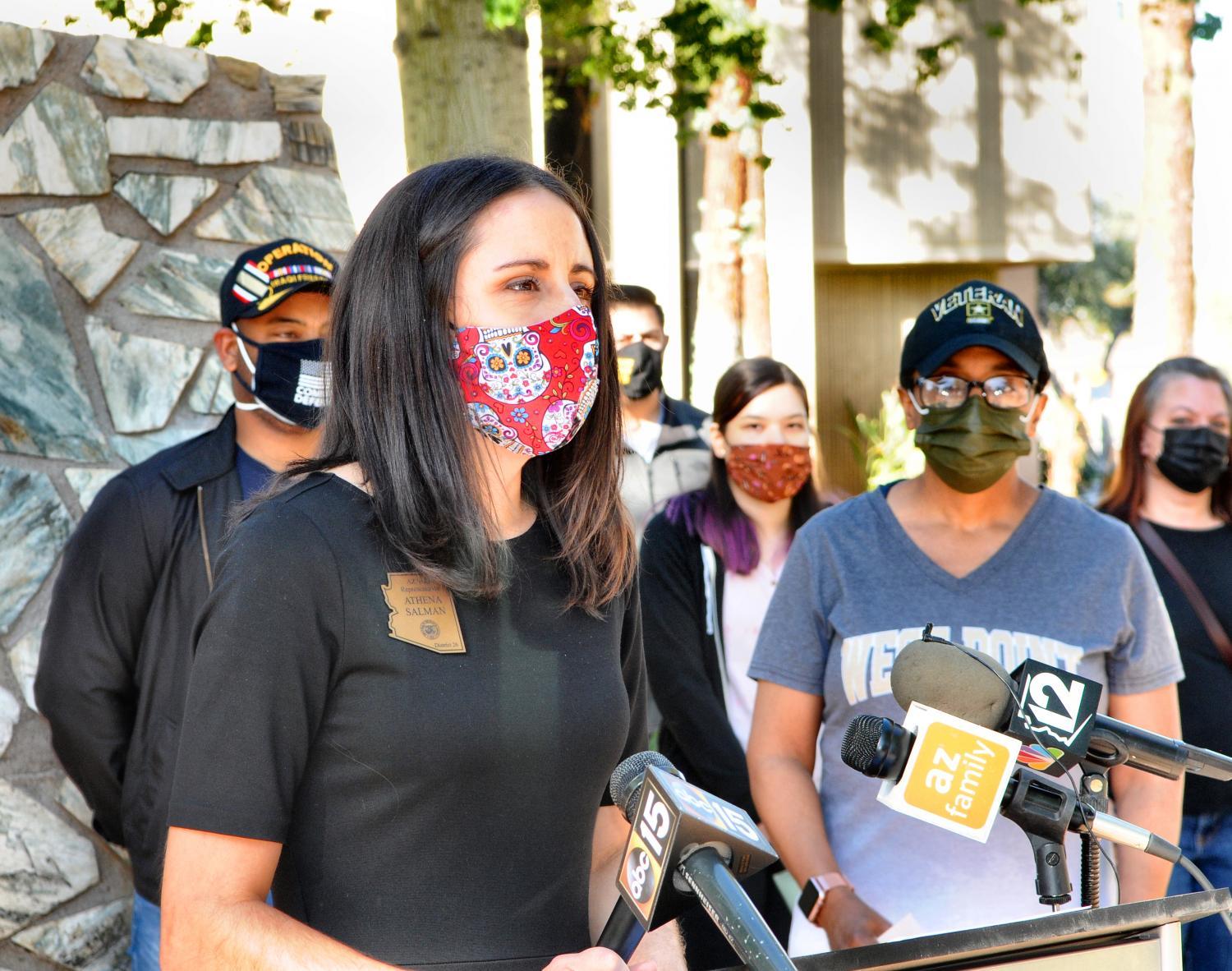 Howard Fischer/Capitol Media Services
Democratic Rep. Athena Salman on Feb. 8, 2021, introduces a resolution to expel Republican Mark Finchem from the House based on his activities before and including the Jan. 6 insurrection at the U.S. Capitol.

A majority of House Democrats are calling for the expulsion of Republican Mark Finchem based on what they say are his improper actions before and during the Jan. 6 attack on the U.S. Capitol.

Rep. Athena Salman (D-Tempe) who is leading the effort, conceded under questioning that many of the individual allegations detailed in what was introduced at HR 2006, by themselves, might not rise to the level of her contention that the conduct of the Oro Valley Republican "was dishonorable and unbecoming of a member of the House." She also contends that his activities "undermine the public confidence in this institution and violated the order and decorum necessary to complete the people's work."

"When you look at these things in a vacuum, sure, they can appear random,"' she said,  But Salman argued that, taken together, they amount to evidence that Finchem "participated in, encouraged and incited the events of Jan.6,"' making him complicit of "insurrection and rebellion"' and therefore unqualified to serve.

He already has obtained legal representation in connection with at least one issue not now in Salman's bill of particulars: his refusal to turn over text messages sought as part of a public records request. His attorney, Alexanader Kolodin — the same lawyer who filed lawsuits to challenge the results of the Arizona election -- argued that the messages are on their own personal devices and therefore not public.

But Kolodin also noted in a letter to the Arizona Republic that the FBI continues to investigate the incursion at the Capitol, saying even if the records were public "the threat of criminal prosecution gives rise to certain Constitutional rights that may overcome the duty to disclose otherwise public documents under Arizona's public records law."

Salman said there is precedent for what she is doing, citing the 2018 expulsion of Rep. Don Shooter (R-Yuma) after the House concluded he was guilty of violating rules against sexual harassment.

And lawmakers were prepared to take action against Rep. David Stringer (R-Prescott) over perceived racist comments. But he quit when it was revealed he had been charged years earlier with paying a minor to have sex with him.

The difference, however, is that this effort has more political overtones.

Salman is arguing it was wrong for Finchem to undermine public confidence in the election. Only thing is, there are more than a handful of Republican legislators who espouse the same thing. She brushed aside the question, saying it should be posed to GOP leaders.

"But we're really entering dangerous territory about whether or not elected officials have the right to lie to the public," Salman said.

There's another hurdle: It would take a two-thirds vote of the 60-member House to oust him, meaning at least 11 of the 31 Republicans would need to go along with the 29 Democrats. Still, Salman said she believes there is enough to say Finchem incited insurrection, including his membership in the Oath Keepers which was involved in the attack on the Capitol and which she said "had the very clear intent to kill members of Congress, to kill the vice president." And she said even if he didn't enter the Capitol, he did go past the barricades around the building.

Part of her complaint is based on Finchem's ties to Ali Alexander who has described himself at the "father" of the "Stop the Steal" movement that ultimately culminated with the attack on the Capitol. Salman said that Alexander, who is being sought by the FBI, worked closely with Finchem to get people to the Washington rally that led to the invasion of the Capitol.

Much of what is in HR 2006 is a matter of public record. For example, he helped put together what Salman called a "sham hearing" at a Phoenix hotel where Trump attorney Rudy Giuliani told a handful of GOP lawmakers the evidence he had of fraud in the election of Joe Biden. The Republic has since reported that the Trump campaign paid a Finchem-owned company more than $6,000 for "recount: legal consulting.'"Finchem said it was for "crowd control and security costs" for the Dec. 18 hearing. Salman said that "contributed to the lies and the incitement" that culminated in the Jan. 6 riot.

And on Jan. 6, as people marched from the rally at the White House to the Capitol, Finchem sent out a picture of people on the steps -- beyond the barriers -- saying this is "what happens when the people feel they have been ignored and Congress refuses to acknowledge rampant fraud."

Then as people began breaking into the building, Finchem sent out another photo, with the caption: "Trump supporters stop Antifa from breaking into Capitol." He never provided any evidence to Capitol Media Services about the veracity of that statement.

But much of what is in HR 2006 comes down to what could be considered guilt by association because of the activity of the people who did show up in Washington, some at Finchem's behest.

"Members of the mob came prepared for violence, wearing military gear and carrying police and military tactical equipment, two-way radios, bear mace and zip tie restraints, indicating planning and coordination in advance," Salman's resolution charges. Then there are the people who brought Confederate flags into the Capitol, "a traitorous act of betrayal to the United States of America, and pipe bombs planted at the national headquarters of the Republican and Democratic parties.

Rep. César Chávez (D-Phoenix) filed a separate complaint last month with the House Ethics Committee saying that Finchem's activities in support of the riot amount to a violation of his oath of office and the U.S. Constitution, making him unfit for office. There has been no activity by Rep. Becky Nutt (R-Clifton) who chairs that panel.

And several Democrat lawmakers also have asked the FBI to look into the activities of Finchem and then-Rep. Anthony Kern (R-Glendale) in Washington. Salman said Monday the only response from the agency was that it had received the letter.