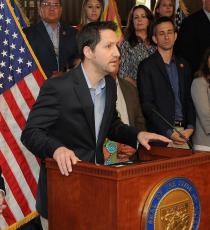 Republicans who control the Arizona Senate fell one vote short on Monday of holding the Maricopa County Board of Supervisors in contempt for failing to turn over voting machines and ballots from the November election that lawmakers want to examine as they continue to question President Joe Biden's win in the state.

One Republican member joined all 14 Democrats in voting against a contempt resolution. If the measure passed, the five-member board could have been subject to immediate arrest.

Republican Sen. Paul Boyer broke ranks, angering his fellow Republicans. He said finding the board in contempt while there's still a chance for a solution was not the right thing to do.

“I’ve always said, so long as there’s hope for both sides to work with one another, I want to do all I can in my limited power to have us work amicably together," Boyer said. "We still have time to work together on this.”

GOP Senate President Karen Fann leaned on Boyer to change his vote, saying that not passing the measure lets the board off the hook. The contempt resolution could be revived if Boyer agrees to back it.

Sen. Warren Peterson, who heads the Judiciary Committee and issued the subpoenas that the board is refusing to honor, said it was clear the board was being obstinate.

The Senate has been trying since mid-December to get access to ballots and other materials so they can do their own audit of the election results. They are prompted in part by the many Republicans who subscribe to unfounded claims that President Joe Biden won Arizona because of problems with vote counting. GOP senators say they’re just trying to boost voter confidence in elections.

The board has already turned over a massive amount of data requested by the Senate as it seeks to perform an outside audit of the election that saw former President Donald Trump lose in the state. Some Republicans continue to raise unfounded claims of potential fraud or miscounts, which were rejected by a series of Arizona courts, including the state Supreme Court.

On Monday, the board filed for a restraining order and injunction barring the Senate from voting to hold it in contempt while a court considers a request it filed on Friday to quash the subpoena. That court filing says the effort by the Senate is a sham.

Supervisor Steve Gallardo, the only Democrat on the board, said he's concerned that backers of former President Donald Trump will take matters into their own hands if the Senate resolution passed.

"You know, what really concerns is not (Senate sergeant at arms) Joe Kubacki showing up to my door, or even (state police), it’s the rhetoric of these people online — these are the people with zip ties.

“And I would hope that Karen Fann knows who’s she talking to," Gallardo said. "Every time she throws something out there, this whole group that was part of this insurrection, that’s the audience that she’s talking to.

"Someone’s going to get hurt if they don’t stop this,” he said.

And Sen. Kelly Townsend, a Mesa Republican, seemed to imply that was likely while talking about her vote. She and other Republicans say they've been inundated with calls from voters who believe Biden's victory in Arizona was due to fraud or other voting issues.

“‘This shouldn’t fall into the hands of the public ... when they’re so lathered up,” Townsend said. “So public, do what you gotta do.”

The county board supervisors said in Friday's court filing that while they respect the power of the Legislature to issue subpoenas and have provided much of the information lawmakers seek, it would be illegal to turn over the ballots, and allowing access to voting machines by unqualified personnel would render them useless in future elections.

Fann said despite the politicization of the fight between the board and the Senate, her position in the Legislature is helping fulfill its proper oversight role.

For more about the situation and his vote, The Show spoke with Sen. Boyer.

STEVE GOLDSTEIN: So, you know, you've been known as someone who likes to approach things in a very civil way, and that seems to be the impression you gave yesterday. So explain to us why you decided to go this direction, at least now with this contempt vote.

PAUL BOYER: It was a vote that I was struggling with over the weekend, and I, I got the idea Sunday night. I called President [Karen] Fann and I said, "Can we do, call a meeting with Jack Sellers, the chairman of the Board of Supervisors, and Bill Gates? Just the four of us, no attorneys, no staff, and let's just see if we can figure this out and work it out together." So we met yesterday morning at 8 a.m. I heard their side. I heard, I mean, I've been hearing our side for, for a few months now. And I just thought, "We're so close and we both want the same thing. Let's just work it out together."

GOLDSTEIN: Well, and certainly that was not met well by some of your fellow lawmakers. And I want to also remind people that you also stood up with a now a former colleague of yours in the past to say, hey, there are certain ways of approaching this. Do you feel like a man alone in the wilderness sometimes?

BOYER: I did two years ago and I certainly did yesterday. I was really hoping that one of my Republican colleagues that have privately shared with me that they sympathize with what I'm doing, that they would vote no with me. But yeah, I was alone yesterday.

GOLDSTEIN: Do you think this has gone too far from the standpoint of the contempt aspect of it? I mean, obviously there, even if all these concerns about voter fraud have been proven wrong over and over again in the courts, we understand there are still some people concerned. And so this seems like the supervisors are trying to do something about that. Also seems like the lawmakers are trying to do something about that. But to others, when they observe the aspect of getting to a point of maybe arresting supervisors, that's when it becomes completely out of whack to a lot of people. Do you feel that way? And is that one of the reasons you stood up this way?

BOYER: I do. I think it's gone way too far. I was with the Senate president at least a month ago when our legal counsel came in. He said, "I'm sorry to interrupt, but you wanted me to let you know as soon as I knew that they're going to give us everything that we're asking for." That was the County Board of Supervisors. And I had thought that from that point on, we were, we were going to get everything we're asking for. And, you know, this issue was going to go away. And for whatever reason, it fell apart. And now we are where we are. And I think it's ridiculous that there's even contempt on the table and possible jail when the County Board of Supervisors, their position is, if they follow up on the Senate, what we're asking for, then they would be breaking the law or the contempt resolution would mean that they could possibly go to jail. So they're in a no-win situation.

GOLDSTEIN: And Sen. Boyer, finally, so going forward with this. You mentioned the meeting that you and President Fann had yesterday. Is there a way to bring this together, to have the senate and the supervisors possibly do this? Are you optimistic in any way, or is this basically the direction it's going? And you, again, standing by yourself, at least for a while?

BOYER: I'm optimistic. I've asked the County Board of Supervisors two things. The first one is to hand over the ballots to the county treasurer per the statute. And the second thing, that we go hand in hand with the County Board of Supervisors — we the Senate — to the state Supreme Court. The reason why that's important, I don't want any more appeals. I want this over with. I think everybody wants this done, you know, said and done. And so the county board can get the legal clarity that they need from the Supreme Court, that they can actually hand over the ballots without breaking — without violating the law that we passed decades ago.

GOLDSTEIN: State Sen. Paul Boyer. Senator, thanks so much for your time today.