Phoenix Says No To Low-Barrier Homeless Shelter, But Debate Not Over

After a two year process, Phoenix leaders approved more shelter beds for the Human Services Campus. But homeless service providers didn’t get all they wanted.

Existing zoning limited the campus near 13th Avenue and Madison Street to 425 beds. Wednesday night, the council approved adding 275 more shelter beds near downtown, along with 200 more beds during harsh weather. But the majority of council members did not support a new 100-bed low-barrier shelter. Low-barrier shelters usually have fewer rules and welcome people as they are. The motion approved by the council defined low barrier as servicing people convicted of sex offenses, actively using drugs and/or those carrying weapons.

Councilman Michael Nowakowski represents the district and sided with business owners and residents who opposed a low-barrier shelter.

“And they’re willing to go from 425 to 900 beds and that says a lot for the poorest of the poor and what does it say to the rest of our community that could afford to have a shelter in their neighborhoods and they’re not,” he said.

“I was really hoping that today we were going to take an opportunity of a location and an organization that’s reputable, that was willing to pay for a shelter, to create a whole new shelter and we’re saying no to it,” said Councilmember Carlos Garcia.

Garcia, along with Councilwomen Betty Guardado and Laura Pastor and Mayor Kate Gallego, supported the low-barrier shelter at Andre House.

Some council members who voted against the low-barrier shelter said the neighborhood around the Human Services Campus has enough challenges due to homeless encampments. 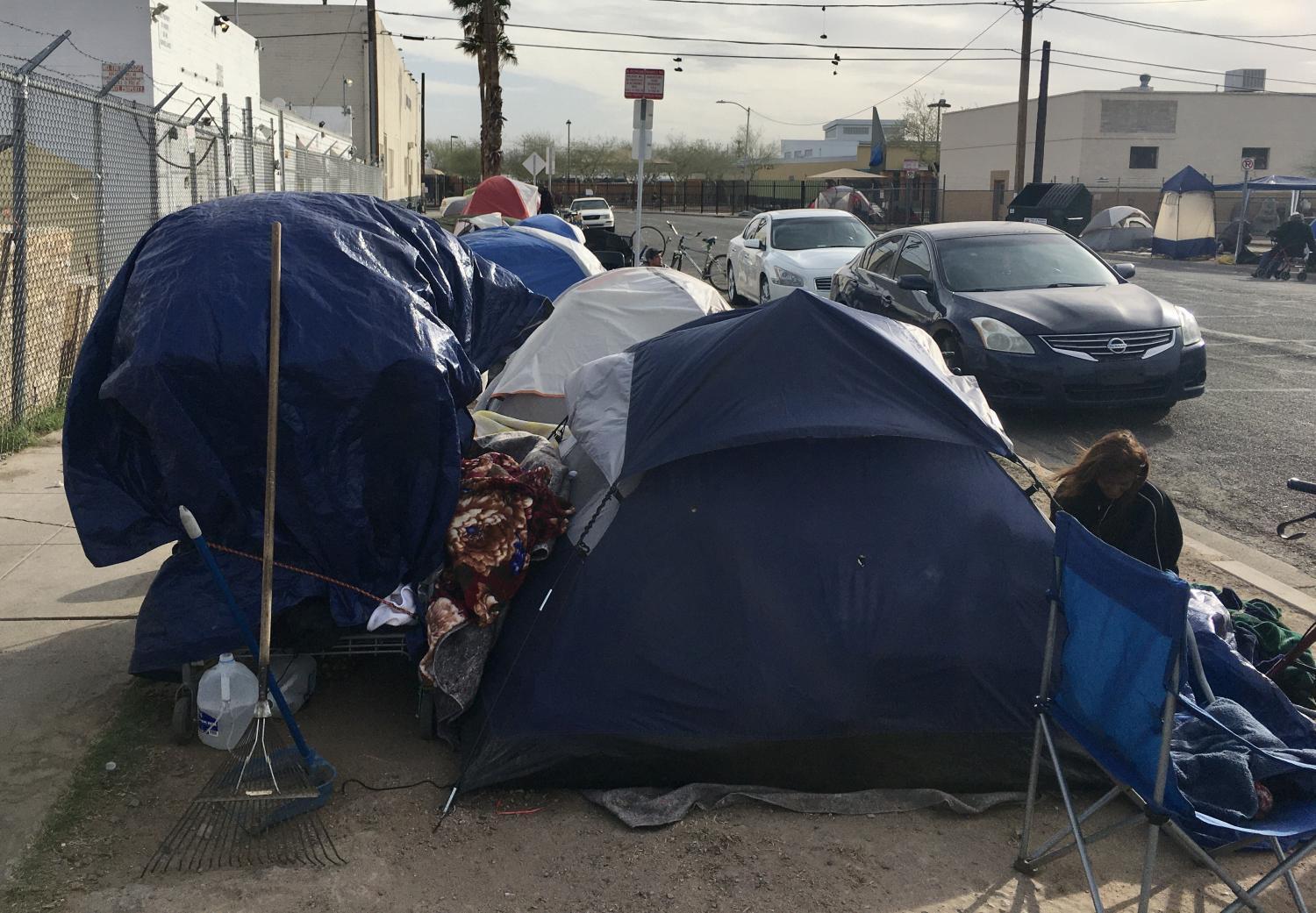 Christina Estes/KJZZ
A woman sits outside a tent at 11th Avenue and Madison Street in Phoenix on Feb. 2, 2020.

“Why is it OK for these individuals to bear the burden for all of this?” said Councilman Sal Diciccio.

During the four-hour debate, Nowakowsi suggested any council member who wanted a low barrier shelter in their district should speak up. Pastor mentioned how back in 2003, she was part of a group trying to find a location for a new shelter north of Camelback Road and met with such resistance that the city backed off.

Wendy Johnson, executive director of Justa Center which is a downtown day resource center for people 55 and older said, “There are currently 158 sex offenders registered to the corner of Justa Center, at least 125 of them are homeless and unable to access shelter.”

John Hogeboom, president and CEO of Community Bridges, a nonprofit that provides behavioral health care and addiction treatment advocated for the low-barrier shelter.

“This is our agency’s mission to work with those individuals who have been given up on basically by society,” he said. “A lot of our folks who work for us started out on the street, some of us went through CASS, so we know what it’s like to be forgotten and to be given up on. Our job is to not give up on folks, to be that light, and to help them any possible way we can.”

Although the new shelter at Andre House was not approved, city leaders could move forward with another location. Phoenix has money available from federal coronavirus relief funds and other sources. Councilwoman Thelda Williams requested staff look at how much more the city can devote to homeless services and shelters.

A few months into the pandemic, Phoenix used money for something it calls “Project Haven.” The city is leasing 95 hotel rooms and covering meals and case management for people considered most at risk for COVID-19, like those over 65 and people with chronic illnesses.

Williams said it would be unacceptable to kick them out when the hotel business picks back up so she and others want city staff to return in two weeks with a budget and options. Councilman Sal DiCiccio said he could support a low-barrier shelter in another location and urged service providers to come up with potential locations.