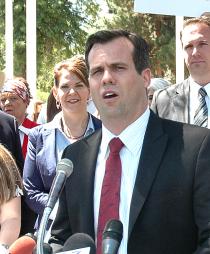 Every Republican in the Arizona Senate supports a resolution to hold the Maricopa County Board of Supervisors in contempt and arrest supervisors for failing to turn over access to voting records.

The board, which like the Senate is controlled by a Republican majority, has provided some, but not all, records requested by Senate Republicans in a subpoena first issued in December. Those GOP lawmakers have pushed the need for their own audit of the county’s election in the wake of unfounded accusations that the presidential election was stolen and fraudulent.

But supervisors have rebuffed the Senate’s request for access to voting equipment and claim a demand for records of the 2 million ballots cast in November is impossible to fulfill because doing so would violate state law.

“The Arizona Senate has put Maricopa County in the unattainable position of following Arizona state law, which we in good faith believe we are doing, or submitting the information demanded by the legislative subpoena,” Republican Supervisor Bill Gates said in a statement.

Petersen, a Mesa Republican, tweeted Tuesday that there’s “no legal consequence if they allow us access to the machines and the ballots.”

“However there are serious legal consequences for failing to comply with the subpoena,” he added.

Those consequences include arrest and prosecution, according to a contempt resolution sponsored by Fann and co-sponsored by the other 15 Republican senators. In a Senate divided 16-14 along party lines, the full support of all GOP senators ensures that the resolution will eventually be approved.

It states that the Maricopa County board “repeatedly and willfully delayed and obstructed a vital and duly authorized investigation by the Arizona Senate.”

In an effort to enforce compliance with the subpoena, the resolution also cites a state law giving the Senate sergeant-at-arms the authority to arrest the supervisors.

Supervisor Steve Gallardo, the lone Democrat on the Maricopa County board, issued a statement criticizing senators for demanding the board violate the law.

Supervisors also criticized the firm chosen by the Senate to conduct its audit. A Feb. 2 email from the Senate’s attorney, Kory Langhofer, confirmed Republican lawmakers have selected Allied Security Operations Group, a controversial Texas firm whose work for allies of former President Donald Trump has been discredited.

A report that claimed there were defects in one Michigan county’s voting machines during the 2020 general election was signed by Russell Ramsland, the co-founder of ASOG who once mixed up voting jurisdictions in Minnesota and Michigan while attempting to support allegations that votes in Michigan were manipulated.

Gates said it’s “unfathomable that the Arizona Senate has hired a known, and frequently debunked, conspiracy theorist to conduct their audit.”

While the contempt resolution was introduced on Wednesday, it won’t receive a vote by the full Senate this week, in accordance with Senate procedures that require bills to be read on the floor three separate calendar days.

The Senate does not meet on Fridays, meaning Monday is the earliest the resolution can be approved.

Senate Democrats are powerless to stop the resolution from passing. Senate Minority Leader Rebecca Rios, D-Phoenix, said it doesn’t seem like the resolution “has been thought all the way out.”

“I mean, seriously, what are we going to do with the supervisors if they’re arrested? It’s silly. It really is silly. And again, this is why Arizona continues to make late-night shows,” she said. “I don’t see the need for this. I think it makes a farce of the process. But we don’t control this building, so this is what they are going forward with.”

Meanwhile, Maricopa County continues to conduct its own audit of its election systems. The board retained two firms certified by the U.S. Election Assistance Commission to review the equipment and software used to count votes in 2020 to ensure neither was compromised and that votes were properly tallied.