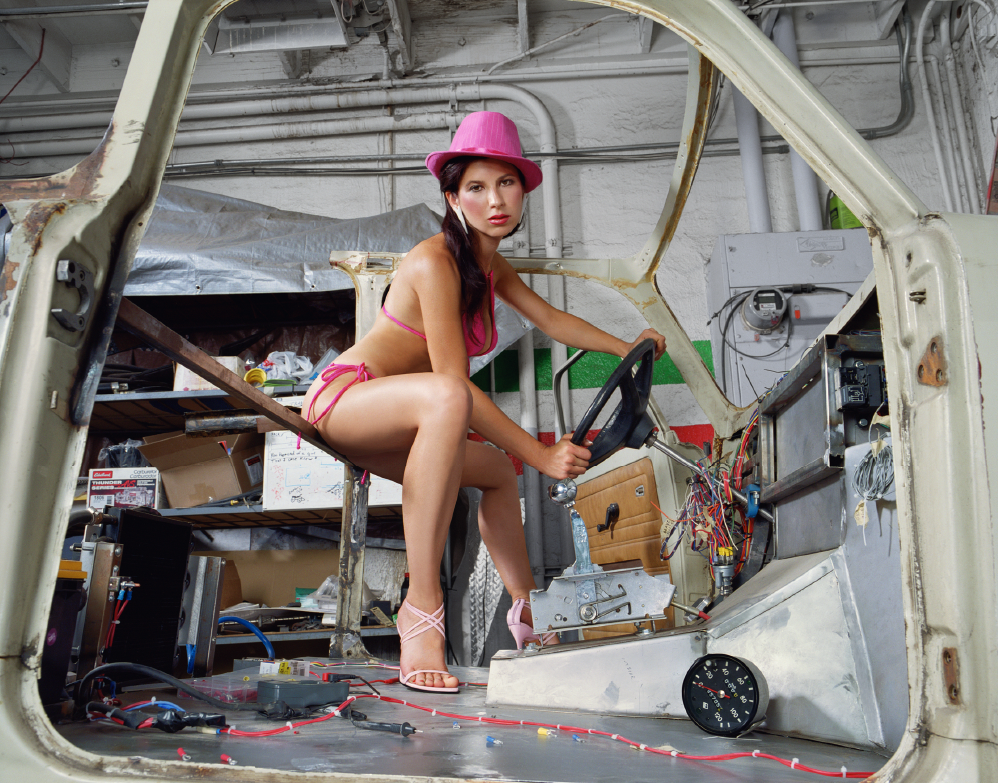 STEVE GOLDSTEIN: In her famed "Bodywork" project, photographer and associate professor Liz Cohen dove deep into lowrider culture. She merged two cars — an American El Camino and an East German car — into a new one. And then she transformed her own body to become the bikini model for the car and presented it at lowrider shows around the Valley. It's a project that makes you think about identity, femininity and resistance. And now the series is being reimagined at the ASU Art Museum, as Cohen adds new videos, photographs, performance and ephemera related to the evolving project. Our co-host Lauren Gilger spoke with the artist more about the newest show and what launched her on this road into lowrider culture to begin with.

LIZ COHEN: Coming from the discipline of photography, I mean, photographers like to look and observe, and I've always been interested in radical self-expression and the tension between the extraordinary lengths we go to, to fit in and how that can sometimes create a tension with us being our most authentic selves, our truest selves. And that kind of, that struggle to represent oneself and to be loved is something, something that I've always cared about. And in lowriding, lowriding is a culture of resistance. Its origins come in the face of oppression in the United States of Chicano people, people of Mexican descent living in the United States. And while many people were building hot rods, which have to do with paring down a car, speed, perfection, Chicanos were going low and slow and building cars that were conspicuous and had to be seen. It was a way to announce, "I'm here and you have to pay attention to me." And so, I mean, that's very interesting to me and is a very kind of positive response to a negative situation.

LAUREN GILGER: Yeah. And then there's this other part of this, though, where you brought yourself into it. You transformed your own body to become the car model for the car that you built so you could kind of play all of the roles here. And this, this obviously delves into ideas about femininity, about feminism. Walk us through, like, that experience. Like, what did you find in actually presenting the car at lowrider shows around the Valley? Like, how did that make you feel?

COHEN: So thinking about issues of belonging and being oneself, I was building this car, I was using the technology used in lowriders to power the transformation of this vehicle — it's a transformer car. And I wanted to become a, genuinely become a part of the custom car culture that it fit into, which is lowriding. And so I had a lot of opportunities there as a woman and as the person building the car, I could also represent my own car. So I guess living in a society that's a patriarchy there is, again, that tension I was talking about between the things we do to be loved and be accepted and the things that I guess are good for us, right? And so I was working out and wanting to model with the car and that tension between thinking about doing it for myself as well as doing it to be a part of something. But it was pretty exciting, you know, to get to learn to build a car and to become a part of a really rich history of car customizing.

GILGER: It's really interesting because I think initially you think like, putting yourself in a bikini on a car is like a, an anti-feminist thing to do. But it sounds like this was really empowering for you in lots of ways.

COHEN: Yeah. I mean, I think one of the pleasures I have with my own work and my projects is that I get to try on different selves. And, you know, this is one part of myself I wasn't exercising, I guess, as much. And so, you know, getting to use my body in that way was new and exciting, and I felt in control of it enough that it worked out for me. And of course, it's like with anything, it can be good or bad. It depends on the dynamic. So for me and the situations I have been in, it's been good.

GILGER: What kind of reactions did you get from people in the lowrider scene here? I mean, did they, did they know what you were doing here or, or understand that you were coming at it from this approach as an artist, as a photographer? 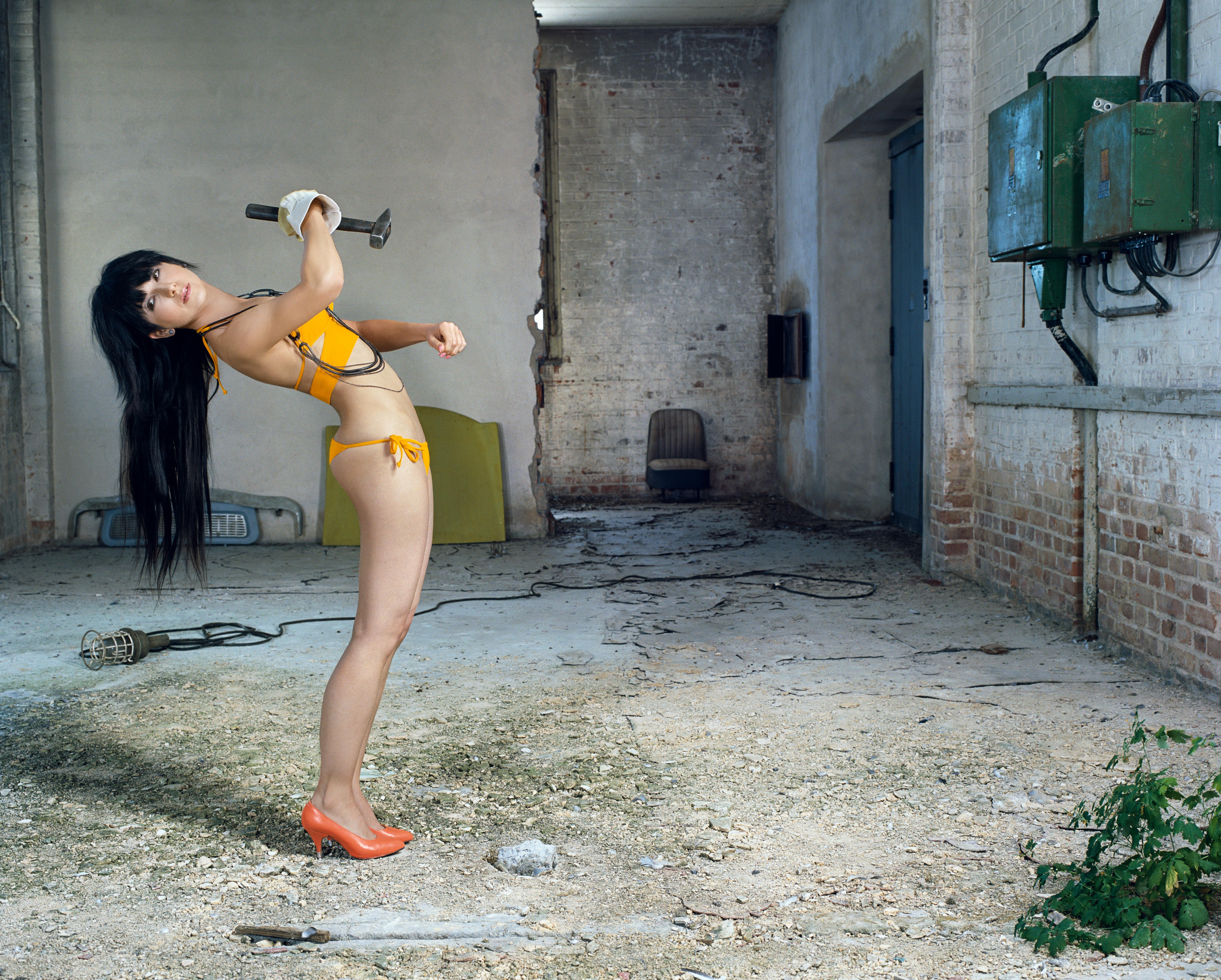 COHEN: Yeah, I mean, I'm always really transparent about, you know, who I am and my motivations and what I do in the other parts of my life. Really early on in the project, I posted a little clip on YouTube of the first time I made the car get longer and shorter, and it was pretty quickly — I, you know, I got tens of thousands of views on that, that video, but I wasn't really sure who was looking at it. And then I had an opportunity with Scottsdale Arts to do a temporary public artwork, and I decided to put together a lowrider show called Radical Mod in Scottsdale that, that showcased cars and bicycles that are considered radicals — that means they have seven or more body modifications. And so I went to a show in Tucson and a show in Phoenix, and I was a little, you know, bashful about asking people if they'd like to participate. I've been looking at, you know, lowriders for a while and going to lots of shows. And I was actually surprised people were familiar with what I was doing — that, that video had kind of traveled. And so it was very exciting for me. And then I got to know folks a little more through getting ready for that show, through interviewing, photographing the show itself. And that's pretty exciting.

COHEN: Well, something really exciting happened in the last several years because the ASU Art Museum gave me the opportunity to produce some new works. So the, the first series that's on the second floor of the exhibition that's a kind of a newer iteration is called "Stories That Are Told By Others." And it's, it's really a piece that honors the models of lowriding, the women that were featured on the cover of Lowrider magazine until 2015 and often not recognized for, I think, their real contribution to kind of the attitude and style in lowriding culture. And so there's a series of photographs that have been hand-painted by Bugs Gonzalez, one of the most, kind of amazing pinstripers in lowriding. And he's done hand-lettering of each of the model's names right on the photographs. And then there's another body of work that's new as well called "Body/Magic," which the exhibition is named after. And it comes from the title of a bodybuilding book that was written by Lisa Lyon. Lisa Lyon was the first championship woman bodybuilder in the world. She trained with Arnold Schwarzenegger. She was really a performance artist. She only competed once, and she had an incredible sense of self and style. And there's a new body of work where I perform with lowrider icon Dazza Del Rio, who I see as someone who's really talking about that agency of the model, someone who really, that agency is just in full force — Dazza Del Rio is this kind of force of nature who's merchandised around herself and is very much in control when she's in front of the lens. And so she and I together try to embody Lisa Lyon. So it's kind of the latest place the work has taken me. And as opportunities arise, it'll, it'll go to some new places as well.

GILGER: All right. I can't wait to see. All right. That is Liz Cohen, an artist and associate professor of photography at the School of Art at the Herberger Institute for Design of the Arts at ASU. Liz, thank you so much for joining us to talk more about this. I really appreciate it.

COHEN: Thank you. Thank you, Lauren. It's a pleasure to be here.