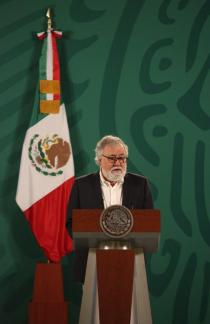 Over the last two years, the neighboring state of Sonora has reported the fifth-highest number of disappearances in Mexico.

Since Mexican President Andrés Manuel López Obrador took office in December 2018, more than 38,600 people have been reported missing in the country, according to federal data. Nearly 17,000 have never been found.

Sonora, with more than 1,200 disappearances in the past two years, has the fifth-highest number among Mexico’s 32 states.

"Unfortunately, three quarters, 76%, of reports people who are missing and have not been located, are in 10 states," said Undersecretary of Human Rights Alejandro Encinas during a presentation Friday.

Nationwide, about 7,000 people disappeared in 2020, down from an all-time high of nearly 9,000 the year before. Encinas says disappearances have exploded in Mexico since the government declared a war on drugs in 2006. More than 80,000 people have gone missing and never been found since 2006.