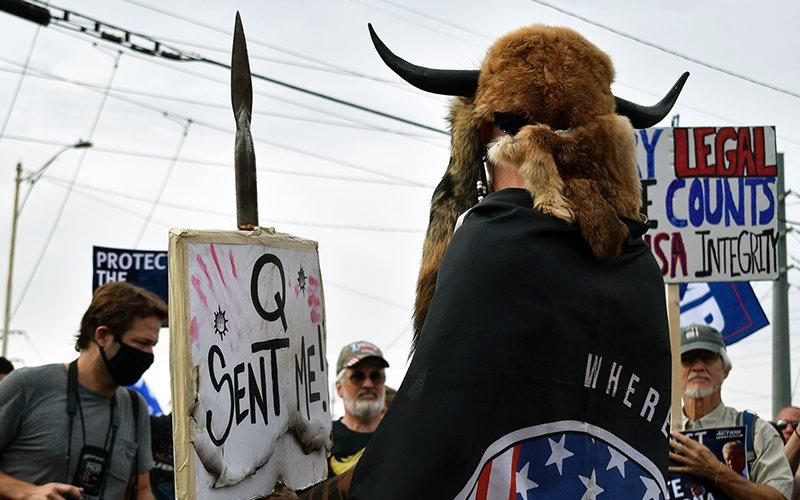 STEVE GOLDSTEIN: The attack on the Capitol Complex earlier this month, carried out by supporters of former President [Donald] Trump, included one participant from Arizona who received a lot of attention, in part because of what he was wearing. On his head he had what we typically refer to as "Viking horns." Some white supremacist groups have decided to adopt the Scandinavian Viking appearance for themselves to bring to mind a warrior mentality and potentially a perceived racial purity. To learn more about the real history and why white supremacists have turned toward the Scandinavian imagery, I'm joined by Mathias Nordvig, head of Nordic studies at the University of Colorado in Boulder. Professor, where does this fascination with Scandinavians or Vikings come from, especially with white supremacists?

MATHIAS NORDVIG: So we have, you know, a long history of, you know, perceiving Scandinavians as barbarians in context of Vikings. This begins already in the Viking period — that is, you know, roughly from the period 700 to late 11th century in northern Europe. English authors talking about Scandinavians in these terms like the "bloodthirsty barbarian" and so on. So that's become sort of a cultural trope. You see it in later English literature — William Blake, Thomas Gray, they sort of like add spice to their literature by adopting tropes of barbarian Vikings and, and, and such things. And so at some point, on the other hand, what we have then is that this is being turned around, turned on its head. And, and what we see is Scandinavians and, and also Germans, for that matter, in the 19th century, actually using these tropes as positive. And that's when it starts getting really problematic, where the idea of that bloodthirsty, barbarian Viking, who's also a colonizer, is then weaponized. And of course, what we see is the, sort of the culmination of that in World War II, where although, you know, most of the National Socialist propaganda was Christian and related to Christian empires in central Western Europe, like the early German empires and so on, there was also some propaganda based off of Scandinavian prehistory and the Viking age.

GOLDSTEIN: Is there evidence to indicate that Scandinavians and Vikings are in for racial purity?

NORDVIG: There's nothing that really indicates any, any, any sense of awareness of those concepts. And in the prehistory of Scandinavia, racism is a colonial phenomenon. It does exist in some capacity before Europeans start colonizing. But, but, but the thoughts as we know them today materialize through that history of colonization and ranking people in the hierarchies. And what you have is, is Europeans going out and looking at other peoples and then starting to rank them in hierarchies. And they also do that to each other on the European continent. And in that ranking that we see in the European continent, especially in the late 19th century, early 20th century, the sort of this idea of the Aryan, the blond, northern European, becomes the top of that hierarchy. So it's actually fairly late — the invention of, of this racial purity and, and the blond Aryans and all that stuff that is associated with the northern Europeans.

GOLDSTEIN: And how do women fit into all of this?

NORDVIG: So women largely, because this is a literature written primarily by men, are largely relegated to sort of secondary roles in the literature. What we have are examples of, of some few powerful individual females, some who become ancestral mothers to powerful men later on. And in medieval Iceland, people recount their ancestry, their descent from, from, from these women. And you have, you have a few like this in this literature about the Vikings. There are a few women here and there who will take up a sword or, or a knife and do what needs to be done in their opinion. But, but usually, actually, the, the, the perception of women in this medieval Icelandic literature is actually relatively negative. Women are often instigators of, of disputes that then, you know, precipitate to the perceived poor male relatives of, of this who are then, who then need to go into a conflict to preserve honor. We get a, we get a somewhat varied perspective on what the role of women is or was in that society, but I would say largely, they, they are the secondary characters in the literature.

GOLDSTEIN: Why is it bad when someone says you look like a Viking?

NORDVIG: So, you know what, at first it's flattering, I guess, because the thought is, you know, tall, broad shouldered guy.

NORDVIG: You know, these kinds of things. That's flattering to hear, of course. But when you start to think about it, what we're dealing with here is also marking a certain population in a certain way —speaking positively about a certain population and their physical features. While that might be flattering on an individual level, on a personal level, you know, if you look at that in a sort of broad context, what we have nowadays are, you know, a long tradition of favoring the white northern European appearance. And that is at the root of it, inherently racist, too. So what we're basically doing when we're equating modern Scandinavians with Viking is that we're, we're also insinuating certain thoughts and ideas about race and what is considered positive and negatives in terms of race as some sort of evaluative scheme. And so, you know, I think, I think it's, it's problematic to, to, to, to say something like that. The, the Vikings looked very different and most of them were not as tall as modern humans.

NORDVIG: And it has roots in — actually, these — it has roots in even in Roman writing about northern Europeans. And Roman writing about northern Europeans in the first centuries, A.D. was also incredibly tendentious and used stereotypes because they were looking at what they perceived as barbarians, too. So basically what we're doing is that we keep recycling, you know, thousands of year old stereotypes about peoples. And I feel nowadays that, you know, the time has come to, to leave that stuff behind on a broad scale.

GOLDSTEIN: Mathias Nordvig is head of Nordic studies at the University of Colorado in Boulder.