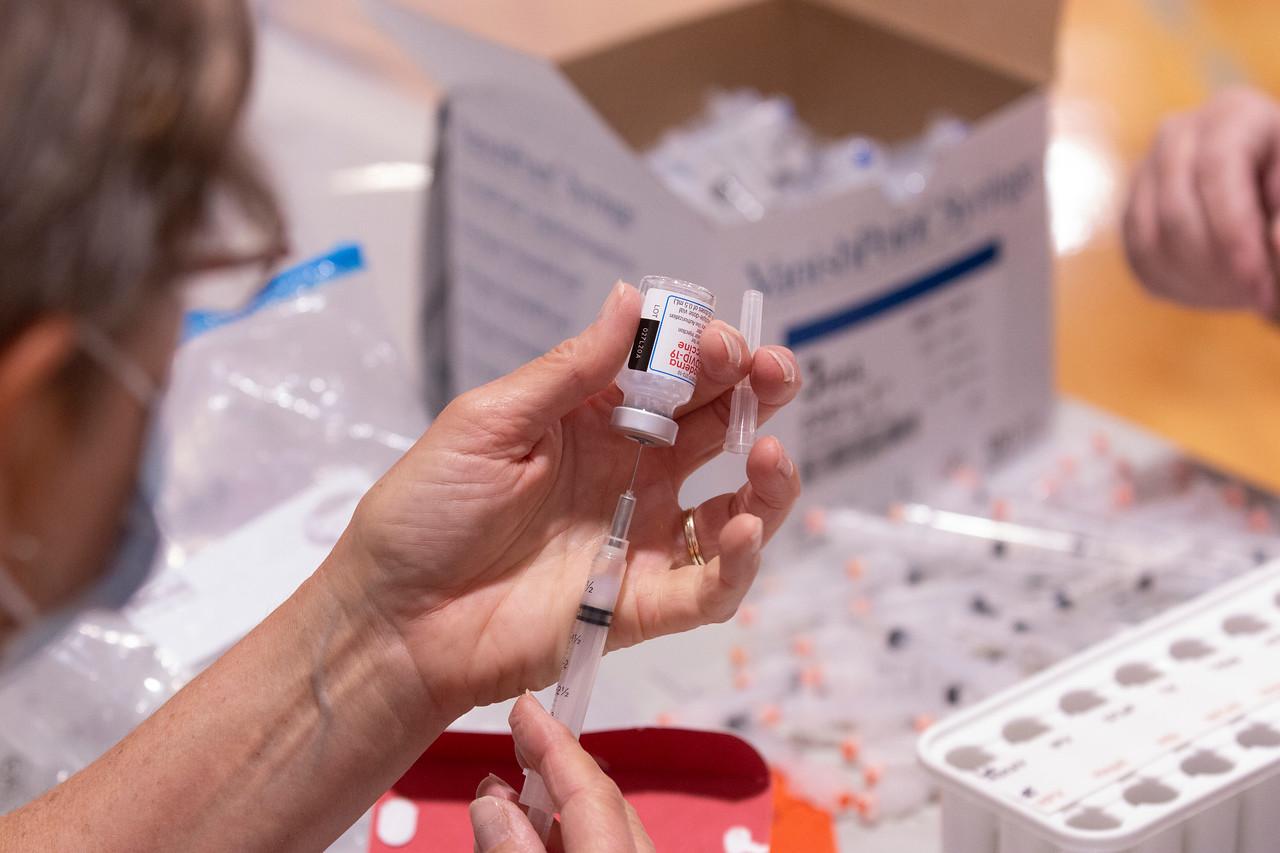 Like many school districts, San Carlos Unified was on spring break when the state decided to close school buildings due to the COVID-19 pandemic last March. This means it’s almost been a year since the district, located on the San Carlos Apache Reservation, started conducting classes remotely. But Assistant Superintendent of Academic Excellence Donna Manuelito said it hasn’t been easy since some students have limited access to the internet and electricity. Teachers have also struggled, and the challenges are apparent when Manuelito sits in on virtual classes.

“Sometimes I’ll notice that the teachers are breaking up, or they’ll lose their teacher and then the teacher has to re-enter the Zoom room," she said. 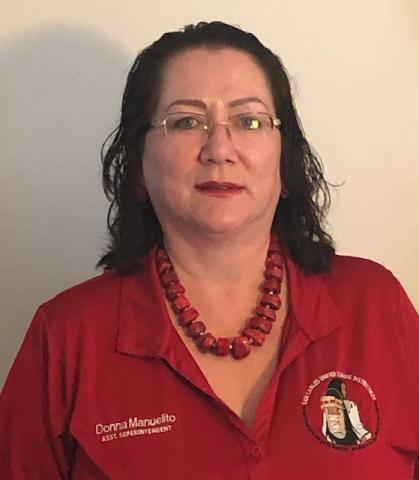 Donna Manuelito
San Carlos Unified School District Superintendent Donna Manuelito says many district employees have already gotten their first or second doses of the COVID-19 vaccine. She says this means the district will be able to allow them to return to schools.

As Arizona continues to see high rates of COVID-19 infection and hospitalization, school districts such as San Carlos and others hope the vaccine will help them resume in-person learning soon. For districts like Globe Unified in Gila County that are already holding in-person classes, the hope is that the vaccine will provide staff with another layer of protection.

“There’s no assurities in this life, and COVID-19 has brought up lots of uncertainties, but we are very much of the mindset, those of us who are getting it I believe that it can protect and will, and that it can slow the spread," said Globe Superintendent Jerry Jennex.

Many Arizona educators seem willing to get the vaccine, according to surveys being conducted by some districts. The San Carlos district provided professional development training on what the vaccine was and how it came about to ease staff’s minds.

“That was part of their (professional development) and then at the end it had a survey, and it said 60% were planning on taking it," Manuelito said.

Similar surveys by Apache Junction Unified School District in Pinal County and Mesa Public Schools, east of Phoenix, showed 83% of Apache Junction employees and 76% of those in the Mesa district had either gotten the vaccine or were in the process of getting it. The Globe district estimates 60% of its nearly 200 employees have already gotten their first dose of the vaccine, Jennex said.

How soon Arizona educators can access the vaccine depends on where they live. Some counties and the San Carlos Apache Healthcare Corporation have been inoculating educators since late December along with adults 75 and older and protective services occupations such as law enforcement as part of Phase 1B.

Renevie Magboo, the San Carlos district's dean of students and CTE director, said she was initially hesitant to get the vaccine but ultimately did it for her son, who has underlying health conditions.

"We're just so fortunate that the San Carlos Apache Tribe included educators to get the vaccine right after the front liners," she said.

San Carlos sixth-grade teacher Estelle McIntosh, who is San Carlos Apache and lives on the reservation, decided to get the vaccine because she feels it will protect her family and her community's elders.

"We have lost many elders already in our community, so that was probably one of the biggest reasons I got the vaccine," McIntosh said.

But in northwest Arizona, Mohave County, which is also in Phase 1B, opted to vaccinate seniors and individuals in protective service occupations before it moves on to educators.

“Educators are obviously extraordinarily important to Mohave County. However, we know that the people that are 75 years and older — of which we have a huge population of that group in Mohave County — are the most prone to having very, very serious reactions to COVID-19,” said county spokesman Roger Galloway.

Susan Collins, a Kingman educator who's currently working in-person with students, said she understand the county's rational but still worries about the risk she faces at work because she's not vaccinate yet. She also fears that she could expose her mother —  who is over 75, immunocompromised and depends on Collins' for support — to the virus.

"I feel like the health and well-being of my family is not being considered," she said. "It just feels like once again, the people that are making policy only want us to do what's convenient for them and not necessarily what's best for teachers or for students."

But even educators in counties prioritizing them are having trouble getting an appointment. That’s the situation in Pinal County, Anderson said.

“Appointments are all the way out to about the Feb. 25 timeframe unless you want to go in the middle of the evening and most of those appointments are available at State Farm football stadium and being in the East Valley in Apache Junction, it’s about an hour drive to get there so that part is becoming a struggle," she said. 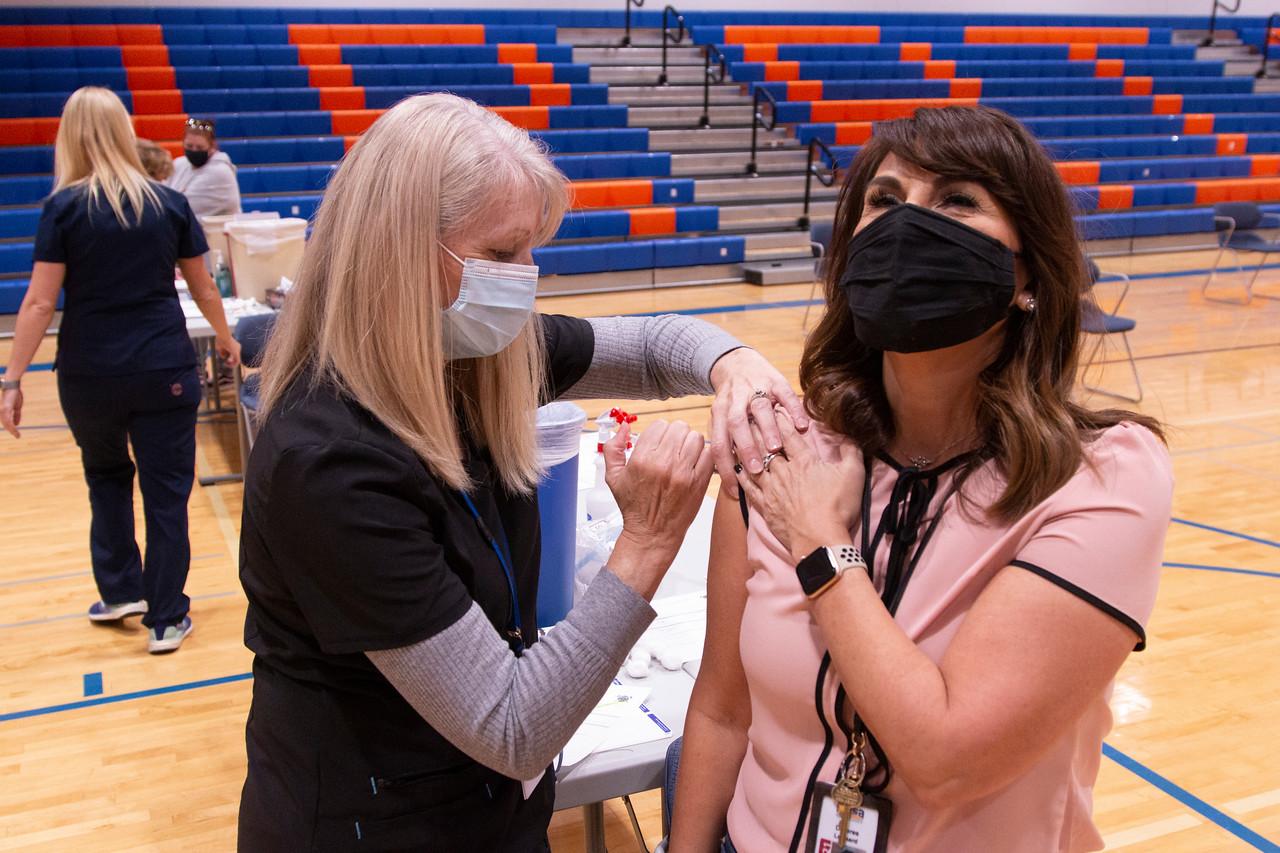 Some school districts such as Mesa Public Schools are overcoming this issue by holding their own vaccination events at different school sites to make it convenient for its 9,000 employees.

"Our number one goal is to get it to those who want it as quickly as we can and to reduce as many barriers to getting the vaccine for them and location is one," said Mesa superintendent Andi Fourlis.

But even when all educators who want to are able to get inoculated, it won’t mean the end of mitigation efforts such as mask wearing and physical distancing in schools. For San Carlos Unified, Manuelito says it won’t even mean that the district’s 1,500 students will immediately return to the classroom. But the district will begin to allow educators to conduct their remote classes from their classrooms so they can have access to a secure, reliable internet connection.

Manuelito, who’s received both COVID vaccine doses, is looking forward to leaving her makeshift office in her bedroom.

“Every morning I have to take the rolling desk, I have to bring it into the bedroom, bring in the chair, set up my laptop. I just can’t wait to go back to normal and have everything set up for me," she said.

Meanwhile, the Apache Junction school district, which is currently conducting remote classes for all students, is hoping to welcome back to the classroom on March 22. The district hopes that that will give employees enough to time to received their first and second doses of that vaccine. When that time comes, Anderson said the district is looking to restore prom and graduation ceremonies for seniors.

“We’re going to do a very best to give them a little bit of highlight at the end of this school year, but my true hope is that we walk into that 2021-22 school year with the pandemic in our rear view mirror," she said.