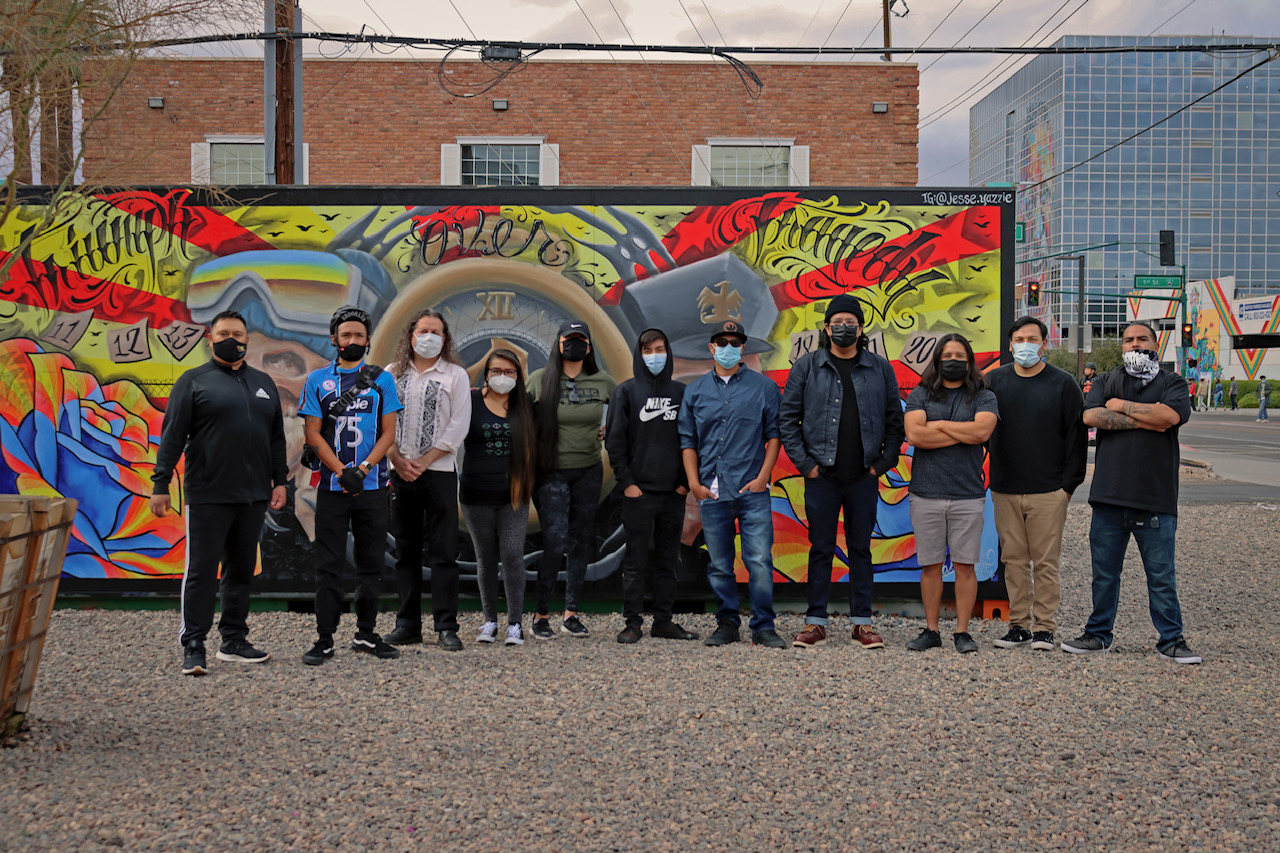 The project is called "UNCONTAINED" and Diné/Navajo creative Jesse Yazzie is the first of four artists to exhibit their work quarterly on an 8x20-foot container in a corner lot near the Roosevelt Row Welcome Center.

Just four months out of prison, his mural “Triumph Over Tragedy” now occupies prominent space in a vibrant part of the city. The painting incorporates iconography from his time on the inside and the relationship troubles as well as substance abuse problems which landed him there.

“The time on the clock actually is my daughter’s birthday, 5/24,” he said last Saturday while pointing out a prominent component of his mural. “She was the center of my sanity, really. I had to focus on her while inside. Your mind races. And it just builds and builds and builds to the point where you have to stay positive or else you could go under.”

Yazzie comes from a long line of other creatives in his family and he used Indigenous symbols in the mural to honor them. For instance, within the clock is a dreamcatcher which he said is a fundamental component of what the artwork represents: freedom from incarceration to now pursue his artistic dreams in a big way. 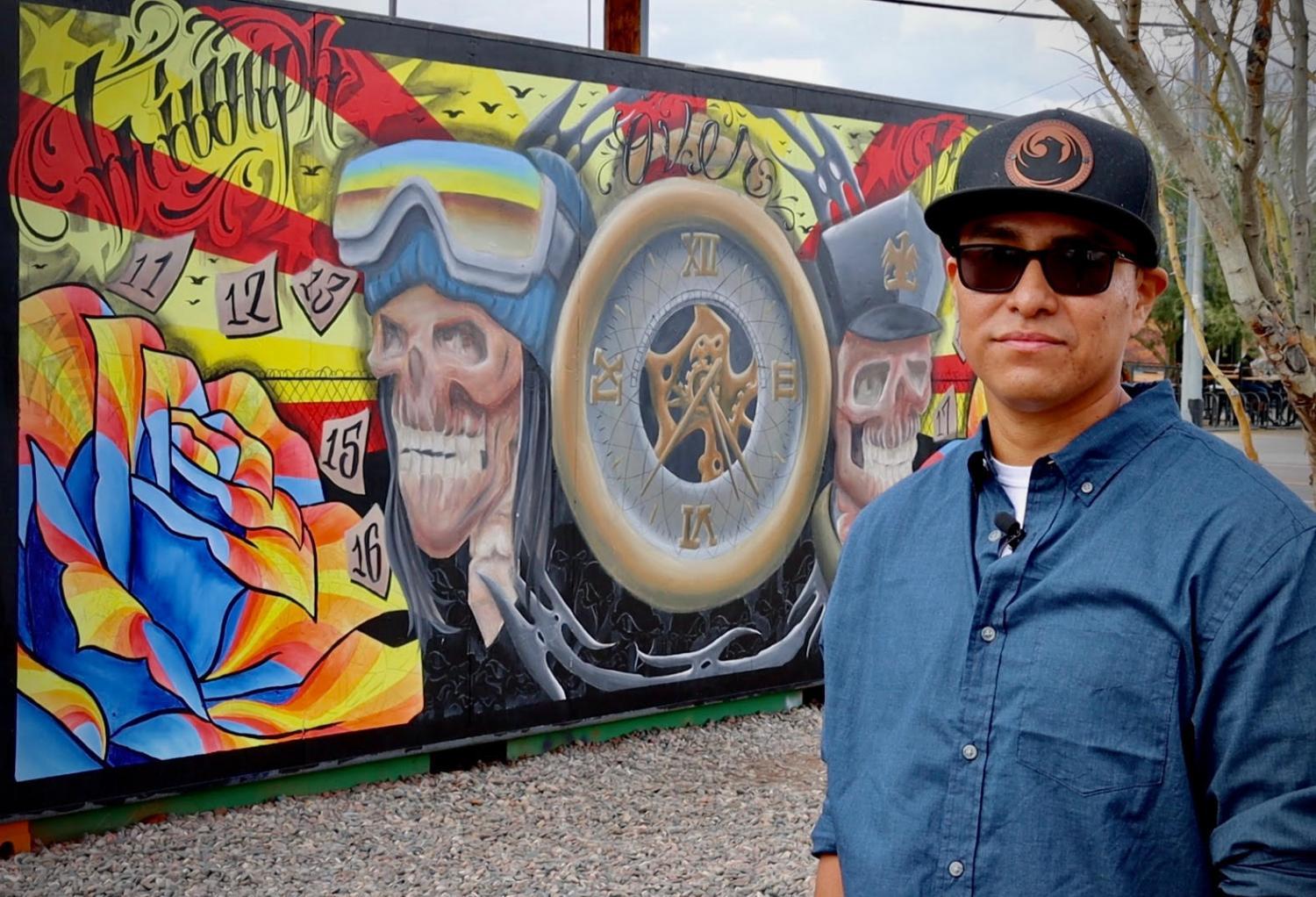 Eunique Yazzie
Jesse Yazzie is a Diné/Navajo artist and the first of four people who will exhibit their artwork quarterly on a shipping container near the Roosevelt Row Welcome Center. Behind him is his mural "Triumph Over Tragedy."

He’s grateful to the juried panel who chose his work. “Roosevelt Row and the partners cooperating with them to make this possible, really helped me out big time because there’s no way I would’ve been able to do this myself, fresh out of prison," he said.

Many of the judges for "UNCONTAINED" are affiliated with or run organizations promoting the voices, stories and artistry of Latino and Indigenous communities in Arizona.

Oliverio Balcells, a Latino artist of Mexican heritage, with Xico Arte y Cultura served on the jury panel. The organization has been an advocate since 1975 and recently programmed containers as pop up galleries but those have been closed during the pandemic because people can’t appropriately socially distance inside them. The containers are now at the same site as Yazzie’s mural and will eventually re-open when it’s safe.

Balcells said "UNCONTAINED" was a chance to look for artists who haven’t had much exposure. “Because we have people with a lot of experience and we want people who haven’t done many murals. But we want to hear the story. We want to pay attention to what they are doing," Balcells said. 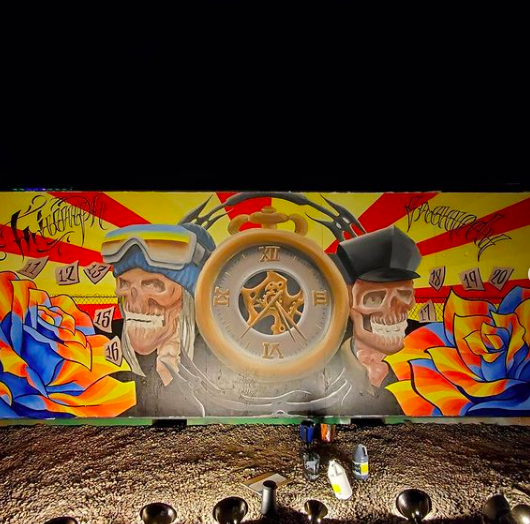 Roosevelt Row CDC
Jesse Yazzie's mural, "Triumph Over Tragedy," is on display until the end of March 2021. It's part of the UNCONTAINED project and is painted on a shipping container located just south of Roosevelt Street on First Avenue.

Just because those artists are referred to as “emerging,” the term doesn’t mean someone who is 18 and fresh out of high school, for instance.

Melody Lewis, who also served on the jury panel, is of Mojavi/Tewa/Hopi descent. She started Indigenous Community Collaborative but is not an Indigenous designer or artist. “I come to this from a totally different perspective on the workforce and education side. What I was looking at was the passion that was coming out of these applications, the stories they wanted to tell but also ones that were trying to tap into a different type of artistry and trying to tell their stories in a different modality,” she said.

Danny Upshaw will be the second featured artist later this spring and plans to use his love of taking pictures by installing a large print on the container. Born and raised in Phoenix, Upshaw, who is Diné/Navajo, said, “A lot of my family is from the Navajo Reservation. There’s Native American creatives here in the city, but it’s kind of nice to have a little bit of a presence especially on a main street like this where hundreds of people are walking by all the time.”

Like a passerby named Karen, who didn’t want to share her last name but offered a positive snap judgement about Yazzie’s container mural when asked. “There’s a lot of energy in a lot of the colors, and I like the sort of image of what feels like the sun rising out of the images of death in a way. You know, it’s a tough time for everybody and we’re all trying to find that sunshine right now,” she said.

Both Karen and her mom, Estie, are new to the Phoenix area. Estie is a painter, but she’s never used a canvass as large as a shipping container. “I was just thinking about it the other day that I’m so comfortable with smaller pieces that I don’t know if I could. Physically, it’s very hard to do something this big. You know, you have to step up on a ladder or something. I couldn’t do it," Estie said. 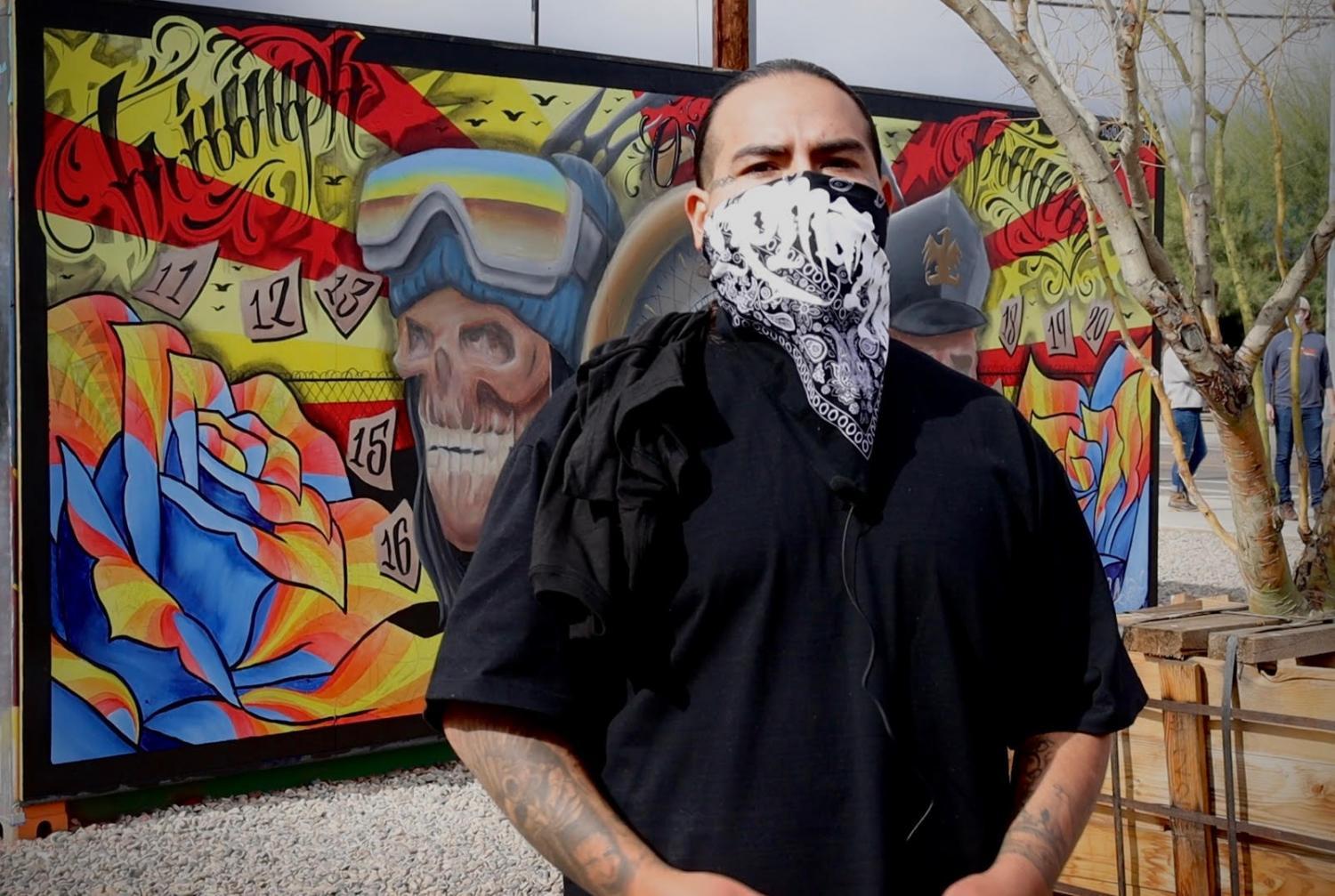 Eunique Yazzie
Zachary Justin is a member of the Gila River and Akimel O'odham tribes. His work will be displayed in the summer of 2021 in the corner lot near Roosevelt Row Welcome Center.

Zachary Justin is Akimel O’odham and will follow Upshaw’s work later this summer. He said his desert abode will feature prominently in his upcoming mural. “I stay out there in Gila River so I’m surrounded by desert, no city. The only store around is a Chevron gas station, surrounded in a bowl of mountains, basically. So there’s nothing but desert cactus, mesquite trees everywhere. That’s going to be my concept of what I’m going to be putting on this mural," Justin said.

Eunique Yazzie, who is not related to Jesse, is a Roosevelt Row CDC board member and one of the jurors. She founded IndigeDesignCollab, which works with Native artists of all stripes to “indigenize” spaces and said a lot of Native peoples focus on seasons because they are people of the land and that translates to the concept of the quarterly exhibitions. "The idea is just to make creative spaces accessible for any Indigenous person at all levels. So, with this sort of space and this sort of rotation of temporary art, we’re taking that concept of creativity and then layering it with stories behind the person that’s doing the painting, but also giving them a fresh new start," she said.

Yazzie, who is Diné/Navajo, also referenced the legacy of President Theodore Roosevelt, for which Roosevelt Street is named. For her, exhibiting "UNCONTAINED" on what was originally Native land is a way for Indigenous artists to metaphorically take back what was once theirs. “Roosevelt was really against Native American presence and championed laws that removed us from our lands. For us to be in this space that honors him represents us taking it back and saying, ‘Look you tried this but we’re still here. We’re going to stay and share our stories and it’s going to be culturally related,'” she said.

Lauded as a naturalist, Roosevelt served as the 26th president of the United States from 1901-1909. His political and legislative push to force Native peoples off their lands and to assimilate white Eurocentric culture, however, was anything but natural.

The result, “put Native children in boarding school systems and removed them from their families, separating them from their cultural beliefs and forcing them to cut their hair,” said Yazzie. “Now we want to see culture and, for me, that’s what Arizona is all about — the blend of 22 tribes that are in the state and how we represent ourselves together collectively.”

"Now we want to see culture and, for me, that’s what Arizona is all about — the blend of 22 tribes that are in the state and how we represent ourselves together collectively."
— Eunique Yazzie

Illustrator, graphic designer and videographer Paul Molina is an Indigenous artist from the Akimel O’odham/Pee-Posh/Gila River communities and is glad to see such prominent Native American work featured on Roosevelt Row. “In this specific space, I believe we’re on Akimel O'odham land, the Pee-posh, the Pima and the Maricopa tribes that are indigenous to this land. There are a lot of artists here from the Gila River Indian Community, the Salt River Community, Navajo Nation and surrounding reservations in Arizona,” said Molina, referring to those who gathered to celebrate the unveiling of "UNCONTAINED" last weekend. “I really believe showing Native art in this particular area does bring hope to Indigenous youth and other artists as well.”

Nicole Underwood, communications director for Roosevelt Row CDC, said the artwork is enlightening, even on an overcast day threatening rain. “That’s the power of art, right? It captivates our sense of curiosity and self-expression. It allows us to understand different pages of people’s stories that they might have not already known. This is a prime way for people to be connected to those stories, to those artists, to those cultures.”

"UNCONTAINED" may just be perfect for the age of COVID-19. Just like Jesse Yazzie, we’re all are trying to triumph over tragedy.