Cactus League To Start Next Month, But Pandemic Questions Remain 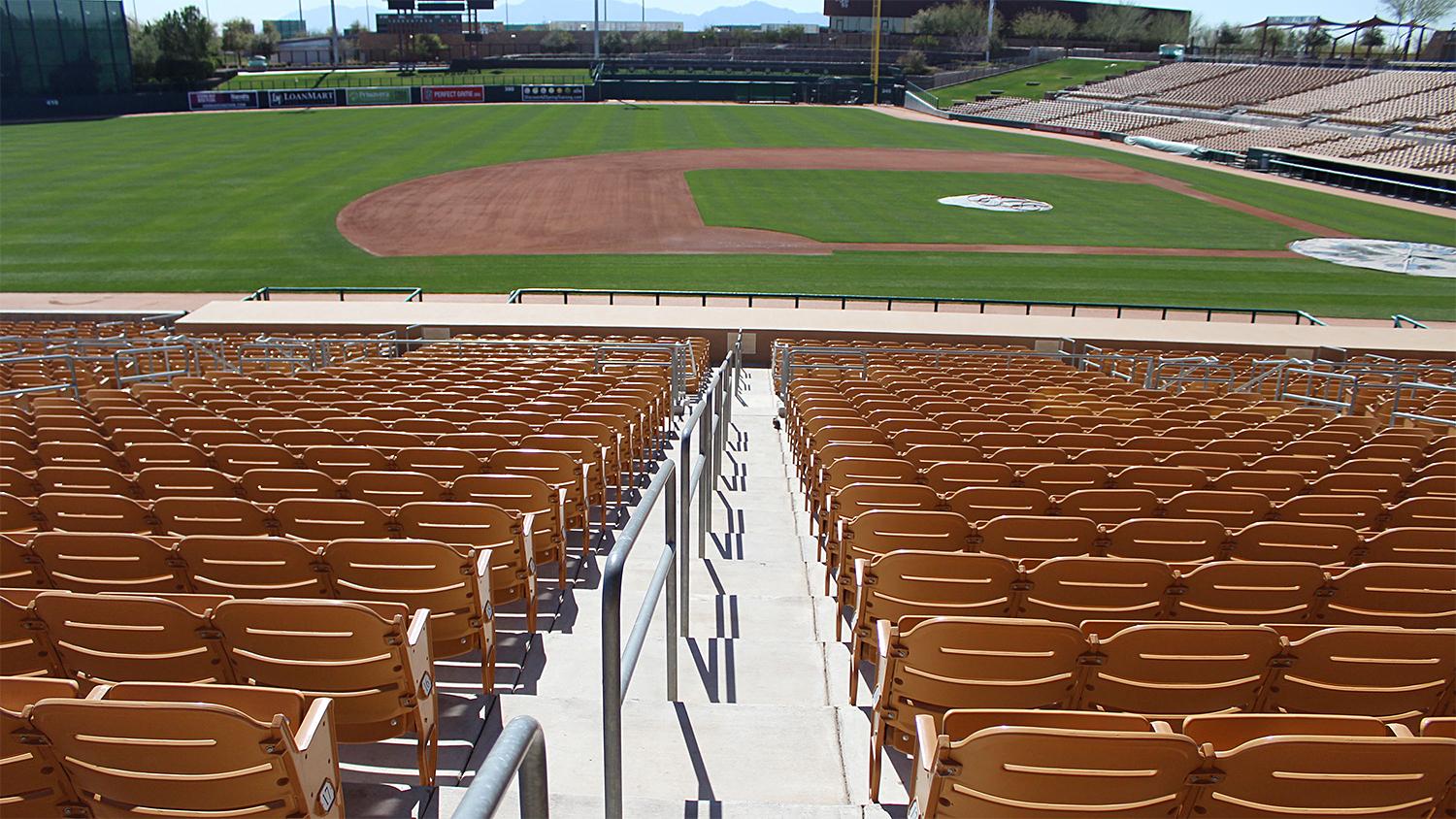 MARK BRODIE: Pitchers and catchers are expected to report to spring training sites in Arizona and Florida next month, and Cactus League games are scheduled to start on Feb. 27. But pretty much everything about what that will look like is still up in the air. With me to talk more about this is Bridget Binsbacher, executive director of the Arizona Cactus League Association. And, Bridget, what are you expecting? What do you think this year's Cactus League, the Cactus League, will look like?

BRIDGET BINSBACHER: Well, we, we really don't know exactly what it's going to look like at this point. It's such a fluid situation, and there are still so many uncertainties. So we're working very closely with the government agencies and health officials to stay current on all of the information and all of the data, make sure that our members have all of the accurate information to make the best possible decisions, to create a safe and secure environment for spring training, whatever that might look like. But we just, we don't have definite information at this time.

BRODIE: I would imagine that makes planning a lot more challenging than in a typical year.

BINSBACHER: It does. There's nothing typical about this year. So we have to, again, keep the communication going and continue to watch it day by day to make sure we have accurate information and communicate closely with all of our facility. And to be clear, the Cactus League Association does not ultimately make the decision — capacity decisions and having spring training fall with the local municipalities. And they will depend completely on health guidelines to make those decisions. And so it's kind of a moving target right now.

BRODIE: Now, one of the hallmarks of the Cactus League is, I guess, intimacy, for lack of a better word, where the fans can get really close to the players — they can ask for autographs, they can watch workouts on back fields. I would imagine that that is not going to be possible this year.

BINSBACHER: Again, we don't know for sure, but it's not likely that it'll be the same as it's been in the past. You know, just because we have to at this point in time, we know that anything that's happening requires social distancing. And so that, that just means that that will be very different and we'll have to eliminate a lot of that access. It looks likely that there would be a reduced capacity.

BRODIE: Have you heard anything from MLB (Major League Baseball) about when they expect to have final guidelines?

BINSBACHER: You know, they're working on that, and I believe will be very forthcoming with whatever definite decisions that they make. As far as safety guidelines though, I think — I know we're all on the same page as far as wanting again to provide a safe and secure environment for our fans.

BRODIE: So obviously, health and safety have to be the top issue for fans, for the Valley, for everybody involved. But clearly, the Cactus League is a major economic driver for the Valley. And given what happened last year where the season was cut short because of the pandemic and a lot of games were canceled sort of midway through, is it possible even to consider what kind of economic impact this year's season might have?

BINSBACHER: You know, I guess we could look at what happened last year because it's so — we don't want to deal in hypotheticals. And again, it's difficult to speculate. But we know that 40% of the season was canceled in 2020 when it came to an abrupt end in March. We were in the midst of our economic impact study. The ASU study basically estimated that we would have been on par with the study before that, which was in 2018. That generated $644 million in 2018. In 2020, in a partial season, we generated an impact of $363 million. So if you look just those numbers alone, the shutdown cost the state close to $300 million in economic impact. Obviously we hate to see that happen again, but we're in a situation right now where public health and safety is absolutely the top priority. And that's what we're focusing on.

BRODIE: And, you know, in terms of some of the uncertainty, and as you referenced, there will probably be less capacity at the parks. And we don't really know what the rules of the road are going to be yet. Do you think that it is safe to say that there will be fewer fans traveling to the Valley from out of state, given that they don't really know if they're going to be allowed to go to the games or maybe go to the bars that they like to watch the games in town, that kind of thing. Would you imagine that, assuming that there are some number of fans let into the parks, that some majority of them will be Valley residents as opposed to folks from out of town?

BINSBACHER: If I were to guess, I would say that we would be looking at hosting more local fans. It's hard to know as far as what people will do with travel and how much time they have to prepare. I mean, obviously, just in light of what we're dealing with before spring training, there's been a tremendous impact on tourism. As far as I understand, though, there is no restriction on travel. So people are still traveling. I don't know that that will stop, but it's just so hard to speculate.

BRODIE: All right, that is Bridget Binsbacher, executive director of the Arizona Cactus League Association. Bridget, thanks for your time. I appreciate it.

BINSBACHER: You bet. Thank you, Mark.