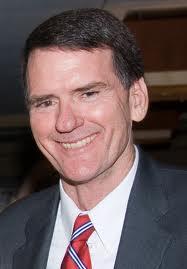 MARK BRODIE: Ten years ago today, six people died when a gunman opened fire at a congressional event at a Safeway in Tucson. Congresswoman Gabby Giffords was shot in the head. She was one of 13 people wounded that day. Among the dead was federal Judge John Roll. Arizona Republic senior reporter John D'Anna tells the story of a man he feels has been overlooked in the decade since his death. He's with me to talk more about Judge Roll. And John, let's start where you start your piece, which is why exactly Judge Roll was at that event on that Saturday morning 10 years ago.

JOHN D'ANNA: Sure, Mark. Judge John Roll was the chief federal judge in Arizona on that particular day — it was a role that he had had for a couple of years. And he had recently written a letter to the 9th Circuit Court asking for permission to start delaying trials in Arizona. And the problem was that because of the increases in border enforcement and the skyrocketing number of drug and immigration arrests, federal judges were overwhelmed with cases and they were in danger of not being able to meet their statutory duties to conduct speedy trials. So he had written that letter. And that same week, Gabby Giffords had written a letter herself citing the same problems. And so on that particular Saturday, Giffords was holding this Congress on Your Corner event, which happened to be in Judge Roll's neighborhood. And he went by to thank her for his support for the courts, and it wound up being his last official act.

BRODIE: Now, your piece does a really nice job of describing who John Roll was, both as a person and as a professional, both a lawyer and a judge. Based on the numerous people with whom you spoke, it seems as though sort of a narrative came out about him that he was a super hard worker, very dedicated to both his job and his family. Take us through a little bit about who he was as a person.

D'ANNA: Well, one of the people I spoke to was a priest who had known Judge Roll since they were in second grade together at a parochial school in Tucson. And that priest told me something that I wound up using in the story and he said, "Be he a beggar or a king, everyone got the same treatment in Judge Roll's court." He respected everyone evenly. And I heard that a lot. And he treated everyone with sort of the dignity that I think he himself wanted to be treated with. Another thing that came through very prominently was that Judge Roll was a very devout in his faith. He was a devout Catholic, he went to Mass every day. And in fact, on the morning he was killed, he had come from Mass to that Safeway parking lot. And then another thing was his love of his family. You know, they were first and foremost in his life. It was really pretty incredible to me, interviewing person after person after person and barely finding a negative thing. In fact, I think I interviewed more than a dozen people and only one person spoke about having negative interactions with Judge Roll. In interviewing people 10 years after Judge Roll's death, a number of them still got very choked up and had to compose themselves before continuing on with our interviews. You know, you just don't see that kind of love and admiration for someone from, from their colleagues like that. So I thought that was just very extraordinary.

BRODIE: How did people who encountered him in the courtroom describe his demeanor from the bench?

D'ANNA: Well, I spoke with people who argued against him when he was a prosecutor at the Pima County Attorney's Office and the U.S. Attorney's Office in Tucson and who also argued in front of him when he was a judge. And they all described him as very intense, very focused on the law. You know, he, he came from the prosecution side so, you know, several people described him as having a prosecutor's point of view, even when he was on the bench. But he was somebody who could show compassion when need be and somebody who could be very stern when need be.

BRODIE: Now, I read in the story that you had communicated with his widow, Maureen, and I thought it was interesting that she had basically said that if — he would be uncomfortable with the idea of you writing this story, basically a story all about him, he would not like that that much. Did that give you pause at all about pursuing this?

D'ANNA: Well, I heard from Mrs. Roll very late in the process. I had asked several intermediaries to make interview requests on my behalf and she declined them. And so I wrote her a personal letter. And told her what I wanted to, to do, and she emailed me back and as you said, she said that Judge Roll would be would be quite uncomfortable. But I felt like Judge Roll's life and his contributions were so extraordinary, and his story largely got overshadowed during the, the moments after the assassination. And I just felt like Judge Roll's story kind of got lost. And, you know, one of the things I set out to do was, was to hopefully correct that. And, you know, Mrs. Roll did agree to allow me to use portions of our email correspondence. So she, she ultimately was OK with, with it. I haven't heard back from her since the story's published, but I hope she believes I did a fair and respectful profile of her husband.

BRODIE: All right. That is John D'Anna, senior reporter with the Arizona Republic. We were talking about his article about Judge John Roll, who was killed 10 years ago today, along with five other people at a Safeway in Tucson. John, nice to talk to you. Thanks for sharing the story. Appreciate it.

D'ANNA: Thanks very much, Mark.