Pandemic Compounding Plastic Waste Problem As U.S. Scrambles To Find New Ways To Dispose Of It

Download mp3 (6.71 MB)
Yvette Roeder/Phoenix Public Works
Arizona landfills are reporting an increase in waste by 20% this year. In this Phoenix landfill, much of the bright colored specks are bits of plastic.

This left the country scrambling to find new ways to dispose of polymer trash.

The onset of COVID-19 has compounded the problem as the need for contactless restaurant delivery, disposable medical gear and packaged online orders pushed back plastic regulations and best efforts for a cleaner world.

Arizona landfills are reporting an increase in waste by 20% this year.

“Our employees have been busy as can be trying to keep up day to day with the volumes of material,” said Joe Giudice, assistant public works director with the city of Phoenix.

Erin Murphy is an Arizona State University plastic pollution researcher following waste trends around the world. She has noticed recycling profits decreased across the country after the negotiation with China ended.

“We've lost one of our main buyers, and so profits from recycling have dropped across the country, but also in Arizona,” she said.

The study tracked 8 million metric tons of plastic waste entering the world’s oceans, lakes and rivers each year. Currently, she said it would take 1 billion people across the world to clean up just 40% of that waste.

Murphy said most people are surprised to learn that plastic pollution is as big an issue in Arizona as it is in states bordering the ocean.

“The problem of plastic pollution extends so much further beyond just ending up in the ocean,” Murphy explained.  For instance, “If you go to Papago Park, in Tempe, or if you go to our natural spaces, you'll see plastics there.”

"If you go to Papago Park, in Tempe, or if you go to our natural spaces, you'll see plastics there."
— Erin Murphy, ASU plastic pollution researcher

The journal reports, “In Arizona, many municipalities have responded by significantly reducing or completely halting their programs, causing some cities to landfill their recyclables.”

For the last decade, Murphy said, Arizona has collected a landfill fee, but has not given a single dollar to any recycling grant programs, which was its original intention.

“Every city we talked to mentioned that [grant dollars are] a lost source of income that really helped them build their programs,” said Murphy.

In Flagstaff, Dylan Lenzen chairs the Arizona Recycling Coalition and is helping the city expand its sustainability program. 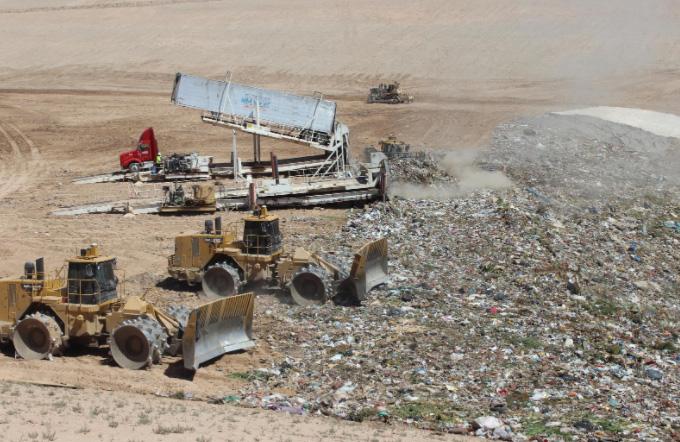 Yvette Roeder/Phoenix Public Works
The onset of COVID-19 has compounded the problem as the need for contactless restaurant delivery, disposable medical gear and packaged online orders pushed back plastic regulations and best efforts for a cleaner world.

State policies, and the onset of the pandemic, have hampered recycling efforts in Flagstaff.

Much of the recycling efforts and plans, Lenzen explained, are put in place through shared ideas. However, the pandemic has slowed that networking significantly.

“I have projects in all over the globe that are on hold right now because of COVID,” said Beth Polidoro, an associate professor of environmental chemistry at Arizona State University.

“A lot of those projects are really interested in connecting, you know, plastic debris to public health,” she said.

In addition to halting her plans, COVID-19 added another layer of challenges to the reduction of plastics, Polidoro said.

The pandemic led to an increase in delivery, which includes plastic lined boxes and packaging, as well as an increase in plastic takeout convenience food containers.

The pandemic also caused a large increase in single-use medical supplies and personal protective equipment, such as millions of facemasks lined with thin layers of plastic.

Those plastics, Polidoro said, eventually break down and become harmful to health.

“If they're small enough, which does occur here in metro Phoenix,” she said, “we do actually inhale and drink them.”

“As a species,” she said, “we underestimate how important the quality of our environment is for health, both physical health and mental health.”

The reduction of plastic waste does not only fall on experts and coalitions, Murphy insisted.

It’s also up to individuals to help keep it under control, “I think it's just educating yourself as much as you can to try to reduce your footprint," Murphy said.