MARK BRODIE: University of Arizona Ph.D. student Earyn McGee has made quite a name for herself these days on social media. In fact, she's become something of an up-and-coming social media star.

BRODIE: McGee is studying lizards and their diets in Tucson, but she's actually made social media part of her dissertation.

STEVE GOLDSTEIN: Indeed, that's because McGee's other goal is to become a natural history show host. In fact, she's been called the future Bill Nye the Science Guy, and she wants young people of color like her to realize there is a place for them in the wildlife field. Our co-host Lauren Gilger spoke with McGee more about those goals and what started her down the path to lizards in the first place.

EARYN MCGEE: I always had a deep love for animals. I always knew that I was going to work with animals. I just didn't know exactly what that meant. My parents were just like, "Oh, you're the weird kid in the family who likes to go chase after rabbits and snakes and whatnot. Whatever, just pick a job that will support you as an adult, because when you leave this house at 18, you're not coming back." So they encouraged me to be a veterinarian. But then when I went to college, I was like, "Oh, let me do this program." And it paid for me to go out and do field research. And so that was my first experience with ecology and conservation, and I fell in love with it.

LAUREN GILGER: That's so cool. So what, what about lizards in particular drew you to them? Why specialize there? 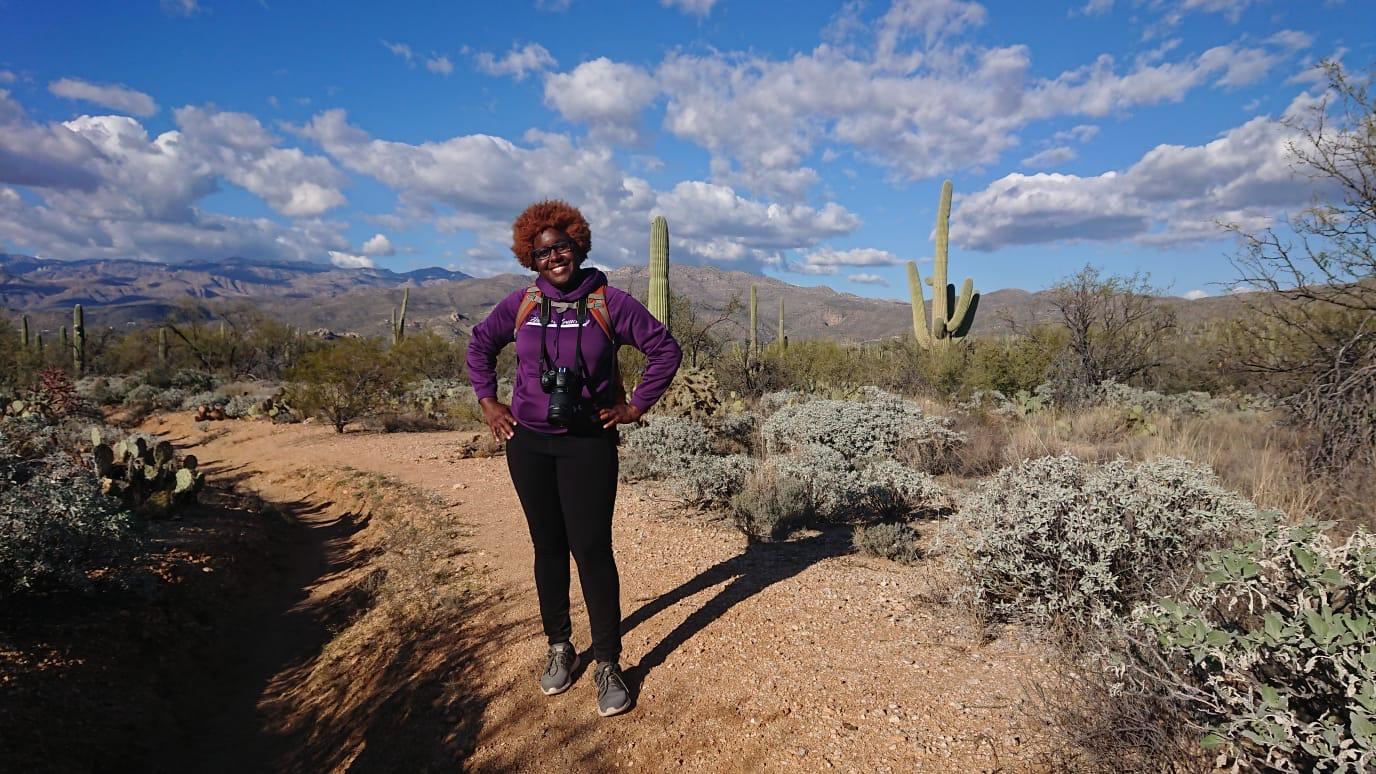 Earyn McGee
Earyn McGee is a PhD candidate at the University of Arizona.

MCGEE: So the adviser who I was working with in the program, the Environmental Biology Scholars Program, George Middendorf, he was working with lizards. And so it just kind of stuck, like the lizards wake up. And then I'm like, "Oh, I don't have to be up at 6:00 a.m. or like 4:00 a.m. to go see these dang old lizards. They're up when I'm up, and then they're ready to go sit down somewhere in the afternoon when I'm ready to go sit down somewhere in the afternoon. It is perfect." And so we just had those little biological clocks that just synched up so perfectly. And I was like, "I can stick with this. I like this. It's fun."

GILGER: All right. All right. There's another part of your sort of message, though. When you, you're really talking about inclusivity in the sciences. So overwhelmingly white-dominated, male-dominated. Have you always felt welcome in the sciences? Have you faced any challenges along the way trying to forge this path for yourself?

MCGEE: Yeah. So I definitely have to battle with imposter syndrome. And then there's also macro and micro aggressions of people just being like, "Oh, look at her. She's the diversity admit" or whatever, and having people talk about how they got passed over because of affirmative action and things like that. So I know that this isn't a space where I am the norm. Like, just me being here is kind of an opposition to everything that these institutions were set up to support. So I've definitely faced different barriers. And that's why it was so important to me that I decided to include it as part of my dissertation. So I'm looking at barriers that prevent Black women from entering and remaining in natural resources careers. And I'm also running a program through the If/Then She Can program and with my sorority, Delta Sigma Theta, to introduce middle school-age girls to careers in natural resources.

GILGER: That's so cool. So this is sort of what brought you, it sounds like, to social media, right? Like, this goal to show that Black women exist, period, in your field, right? What, was there one particular experience that sort of pushed you in that direction — or what made you sort of launch this other side of the communication side of your field?

MCGEE: Well, this, it kind of was something that took on a life of its own. Originally, I started putting out the things that I did on social media because I was a first-year grad student, and I wanted a job. After I graduated, my graduate advisor was on Twitter. And when we would go to conferences and stuff, people will be like, "Oh, Michael is your advisor? He's so awesome. I can't wait to meet him at this conference." And I was like, "Well, I want people to feel about me like that so that when I graduate, I could walk away with a job," and then it kind of grew from there. It was just like, "Oh, this is a really powerful tool, and I am not using it to its fullest capabilities. Let me go ahead and expand a little bit. Let me tell people about my research and my experiences as a Black woman in a white, male-dominated field." Like, I have so much more that I can contribute than just trying to get a job after I graduate.

GILGER: Yeah. Yeah. So it has worked, right? Now you are a rising social media star. I think it's fair to say. You're one of Forbes 30 Under 30 to watch. What's this kind of ride been like?

MCGEE: It has been really interesting, because I never expected any of this. So it is super rewarding, and I'm just glad that other people also see value in what I do.

GILGER: So tell us a little bit about what it is that you're doing on social media all the time. This is for advocacy, but education, too, right? Tell us about things like #FindThatLizard. I love that.

MCGEE: Sure. So #FindThatLizard is a game that I started about two-and-a-half years ago, where I post a picture of a lizard camouflaged in its natural environment, and then people have to find it. And it just kind of started out as a — like, it didn't even start out as a game or anything. I was just showing people one of my struggles with fieldwork about a lizard eluding me and almost losing it because of its camouflage. And then people were kind of into it. And I was like, "OK, I'll start doing this more regularly." And the more I did it, the more people were interested. So it's been really great to see [an] awesome #FindThatLizard community develop.

GILGER: So you have been called the next Bill Nye the Science Guy, right?

GILGER: Is that what we can expect from you in the future? Or are you looking to carve an entirely new path for yourself?

MCGEE: So as far as being a science superstar person like Bill Nye, yeah, you can expect that in the future. But I am definitely going to stick to the natural resources, to wildlife, to conservation. And what I hope is that not only do I show people the coolness of these systems and these animals and everything, but I also can open doors for people and give people resources to pursue these careers that are available to them, especially for other Black people and people of color. Just because we're so underrepresented in natural resources careers, it's important to make sure that not only you show them that this is representation, you also have to give out resources. So that's what I hope to do.

GILGER: Yeah, well, we're excited to see you do it. All right. That is Earyn McGee, a University of Arizona Ph.D. student studying lizards, and of course, the creator of #FindThatLizard. Earyn, thank you so much for coming on The Show to tell us all about this. And best of luck.

MCGEE: Thank you so much for having me.