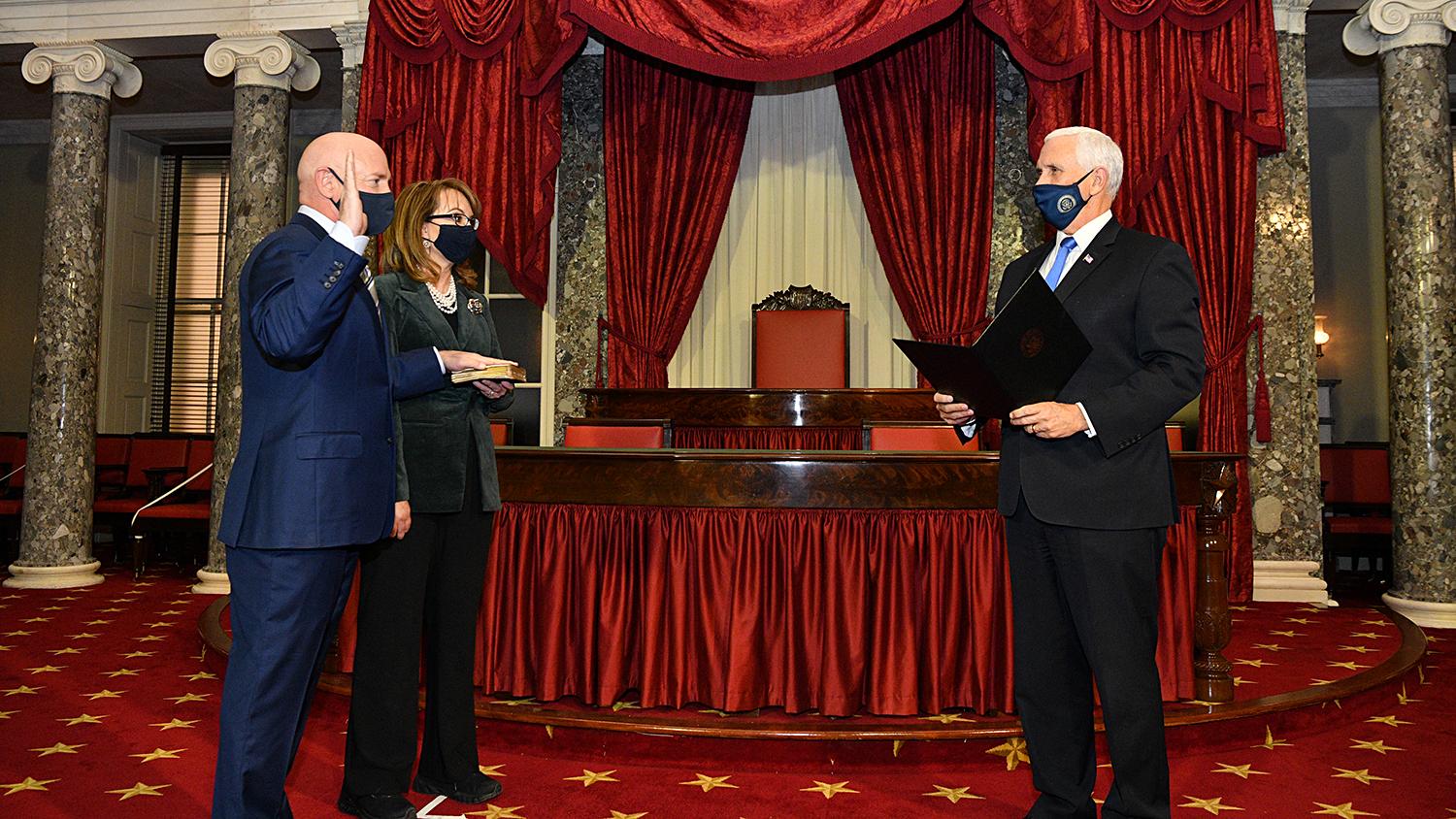 STEVE GOLDSTEIN: The debates continue in Washington as Democrats and Republicans try to come up to some sort of an agreement on a COVID relief package. A bipartisan group of senators offered a proposal, but Majority Leader Mitch McConnell was less than enthusiastic. The Trump administration has reintroduced the idea of checks sent directly to individuals and families, but without additional unemployment funding. So can members of Congress actually go home for the holidays without approving some sort of relief? The likelihood of that seems to be growing. Arizona's new U.S. Sen. Mark Kelly, took his seat less than two weeks ago and is already in the thick of what's going on. And he's with me. So, senator, before we talk about COVID relief, what has it been like in your first 10 days or so in the Senate?

MARK KELLY: Well, a lot of it's new. My prior experience here was as a spouse of a member of Congress — Gabby. So I knew a little bit about like, the lay of the land, where things were, and. But the mechanics of the job is, you know, something I'm learning about — you know, paying attention to when the votes are being called and where you would need to be at what time, and, and we have a very busy agenda and a busy schedule. So it's a, there is a learning curve.

GOLDSTEIN: Well, it's a serious time, obviously. So many important issues. Well, let's talk about the public health emergency. We've seen a bipartisan approach from some Republican senators and some Democratic senators at this point. Does it feel like that has legs, or is that running into some of the same problems people were concerned about before?

KELLY: Yeah, I mean, there are always obstacles along the way. And I am optimistic that they can negotiate something that's going to work for both Democrats and Republicans. They have to. I mean, this, the economic fallout from this is significant. And right now it's up to the federal government, you know, to provide this needed relief. I mean, cases are rising. There is an urgent, an urgent need. And folks are trying to get by on, in Arizona, $240 a week. We need to extend unemployment benefits. So we've got to find some common ground. And there are some issues that are still being negotiated, but I'm hopeful that tomorrow or early next week, they'll have something that's going to work for both sides of the aisle.

GOLDSTEIN: Do you see any possibility that the Senate will go home without some sort of deal? Because that would be, to the general American public, that would be a very bad sign.

KELLY: And it would be a really bad idea, as well. I mean, we can't. I just, I just don't think that's, that's a viable option. And I'm sure you mean go home for the year.

KELLY: That that's not acceptable, no.

GOLDSTEIN: Senator, you ran as someone who was going to try to be as nonpartisan as possible. But a lot of people are concerned that the Trump administration dropped the ball over the course of things, but certainly over the last month or so has sort of washed their hands of the whole situation. Does that concern you even when it comes to the planning of a vaccination distribution that the leadership at the very top just simply isn't there any more, sort of checked out.

KELLY: Yeah, it does. You know, the president doesn't talk about COVID-19 all that often. And I think he's, you know, he's looking, he probably sees, you know, some light at the end of the tunnel with this vaccine being distributed. But it's going to be a long, dark tunnel. And we don't have a lot of tools in our toolbox to slow the spread of the virus. The vaccine cannot be the only thing. So wearing masks. That's why I think a statewide requirement to wear masks is a really good idea. You know, social distancing. And, you know, coming up with some other options to stop the spread because the vaccine... of some on a call that included some governors — not our governor. And there are some estimates that it might take a year in some states — I'm not talking about Arizona — but in some states to get every single person vaccinated that will take a vaccine. That's the other critical thing here, Steve, is we've got to convince 75% of the population to be vaccinated. I'm not so sure those numbers are there right now. So we need to have a marketing effort to convince folks to become vaccinated because, I mean, the, the, the light at the end of the tunnel is really when we get to 75%.

GOLDSTEIN: Senator, you mentioned the statewide mask mandate and in Pima County, Tucson City Council, they've implemented a curfew. There's debate over whether we should have some sort of business shut down to some extent that we had earlier in the spring. Maybe certain businesses like not allowing in-house dining anymore at restaurants and that sort of thing. In addition to a statewide mandate, how would you feel about something that was, was temporary? Because some economists say that would really hit the economy hard. Other economists say it's worth a three or four week hit to make sure we knock this thing out.

KELLY: Well, I know Mayor Romero, I spoke to her about this, she's been talking to epidemiologists and public health officials about this. And, you know, the 10:00 p.m. curfew had a specific goal in mind. And that's when, you know, that's the time in certain locations, bars and restaurants where people often get careless. I don't want to see a situation where we've got to shut businesses down again. That's why we have to do something else. And there aren't a lot of things that we can do. So I can't stress more to folks out there to wear a mask. And it's up to our governor at this point to require folks all across the state to wear masks. I've spoken to him about this. And the thing, you know, that I think is really important here is there are individuals right now that may not listen to a mayor in their community, but they may listen to the governor. And, you know, he has the ability to do that and encourage people to, you know, socially distance, wash their hands, be really careful about who you have come into your home — especially the numbers around the holidays. I mean, that message stressed over and over and over again could, can make a difference so we don't wind up in a situation where we've got to put small businesses at risk.

GOLDSTEIN: Transparency, obviously very important. Folks sometimes feel like their elected officials are not transparent. You're one of the few U.S. senators who's going to have a real public schedule and you've put that out. Why do you think that's important? Because some people might say, "Well, that's symbolic, but does it really mean something?" Why does that mean something to you?

KELLY: Exactly for what you said, Steve? You know, accountability and transparency, it's important. And folks back in Arizona need to know who I'm meeting with and how long these meetings are, when they're happening. And I think this is a step, maybe one of the first steps to start fixing what's broken here in D.C. So I made this commitment early in my campaign. And in the first week, we did release our public schedule. We're going to continue to do that. It's posted for people to see. And we're going to continue to post it every week.

GOLDSTEIN: That is Mark Kelly, U.S. senator from Arizona. Sen. Kelly, thanks so much. Take care.

KELLY: Thank you, Steve. Appreciate it.