'It's Like A Mass Shooter Has Gone Into These Communities': Rural Arizona Overwhelmed With COVID-19 Cases

STEVE GOLDSTEIN: For the more urban areas of Arizona, like Maricopa County, the current COVID spike is the second time we've seen a dramatic rise in cases. But the spring and summer didn't affect rural Arizona very much. So this is the first time those areas are being hit hard. That in combination with a shortage of medical professionals, which already existed, is making the current situation nearly untenable. Earlier, I spoke with Dr. Judith Hunt, who practices in Payson. I asked her to assess how the case spike is affecting her area and other parts of rural Arizona. 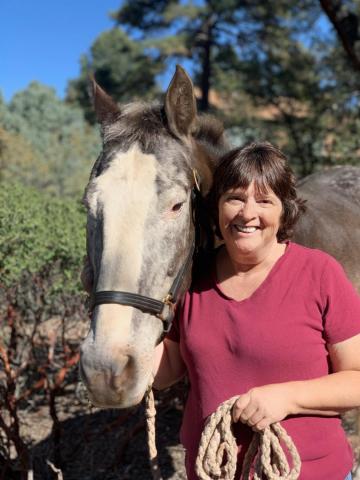 JUDITH HUNT: What you find in rural Arizona is a very tired, very weary and sad medical staff and medical professionals. We are watching people that we have taken care of for years get sick with COVID. We are unable to do much for them. This is a very long disease in that people are sick for a long time. We're finding that very young, healthy, vibrant people are having just as long of a course as people that have the typical chronic illness, high risk factors. It's each other of us that we're taking care of our own that are sick as well. So the dynamic in the rural area is this, these are our neighbors. These are our, our friends. These are our colleagues that we're taking care of. And it just makes us sad.

GOLDSTEIN: Yeah. And, you know, we've heard the idea, just the concept of pandemic fatigue and that has people saying, "Well, I don't want to wear a mask anymore," this or that. But the kind of fatigue you're describing is much more important and much more serious. It's that emotional fatigue where you're trying to help people and maybe not able to do it because there's, there's just too much going on right now.

HUNT: It is. And I think at the beginning there was a lot of support for the medical community. There was also a lot of discussion as to what if the worst scenario happens, what're, what are all of our plans? And I think Payson and Banner Payson in our community, we did a great job in coming up with those plans, but it's been the chronicity. And now in that chronicity is the surge that is presenting us with the worst case scenarios. We are a critical access hospital, which means that we're a hospital for people that cannot get to a tertiary care center. And we supply, we are the stopgap hospital and medical community for this part of Arizona. If the hospitals in the Valley or elsewhere are full, we have no place to send our critically-ill patients. We were not made to have a ICU that had many ventilators working. We do not have the staffing. We have a lot of support from having doctors through the telemed, through the e-ICU. But the end of the story is it's still us, and there is nobody behind us. There's not, like, there's nobody behind us that can help us.

GOLDSTEIN: Is there more that the state could be doing to provide resources? We've heard that because the spike is hitting the entire country, health care professionals from other parts of the country really aren't available to come in. If there was more funding in some way or the ability to bring in more medical professionals, would that make a difference?

HUNT: We've been very fortunate in that I think rural people bind together and our county has been awesome and making sure that they get as many supplies and everything they can get up to us. But people is an issue. And before all of us COVID pandemic began, we were already in the physician shortage area. We already were behind in the amount of physicians and staffing that we had. So, yes, in answering your question is, is that, if yes, there was money available, and if, yes, they could find people to come here, that would be amazing. But we look at our, our friends that are in the Navajo Nation and also at White River, and they're having and facing much worse and they're unable to get that support either.

HUNT: In knowing that the vaccine produces the antibodies that are protective basically six weeks from the first shots. So you, we have to have the shot that primes the system, the second shot at four weeks and then about two weeks later, the antibody will be there. So that means that once we start getting the shots, I think that we'd be able to begin to at least have a sigh so we can go from the terror phase to maybe a, a place of where, a place of a little bit more encouragement or at least knowing that our medical staff is protected some. This has just been devastating. It's like a mass shooter has gone into these communities and just shot. And we have people who have died and we have people who are wounded, and we're just not — we just don't feel like we're having any kind of relief or any kind of help.

GOLDSTEIN: Well, I do wonder about that, because on a daily basis, we read the numbers. The numbers are significant and they're scary. But when we say 4,000 here or 6,000 here who've been tested and come up positive or there are 40 deaths or 50 deaths — especially talking about how close folks are in rural Arizona. Is there any concern that we just get too lost in the numbers? That people are just not concerned enough about the, an individual? They're more concerned about the fact the numbers are going up, the numbers are going up. Are we losing sight of that to some extent?

HUNT: I do think that we're losing sight, that each one of these numbers is a, is a family. Is a family that's being devastated and saying goodbye to somebody sooner and oftentimes saying goodbye to somebody not even being able to hold their hands or being with them. This is just terrorizing to us as medical professionals to know that we have to separate families at a time that they should be encouraged to be together, and in separating these families, that these memories are never going to go away and having to say goodbye to the family members. I have patients that are terrified to go into the hospital secondary to an appendicitis symptoms because they're afraid that they're going to go in and they're not going to come out just because of what is being observed in, you know, in the community.

GOLDSTEIN: That is Dr. Judith Hunt, who practices in Payson.