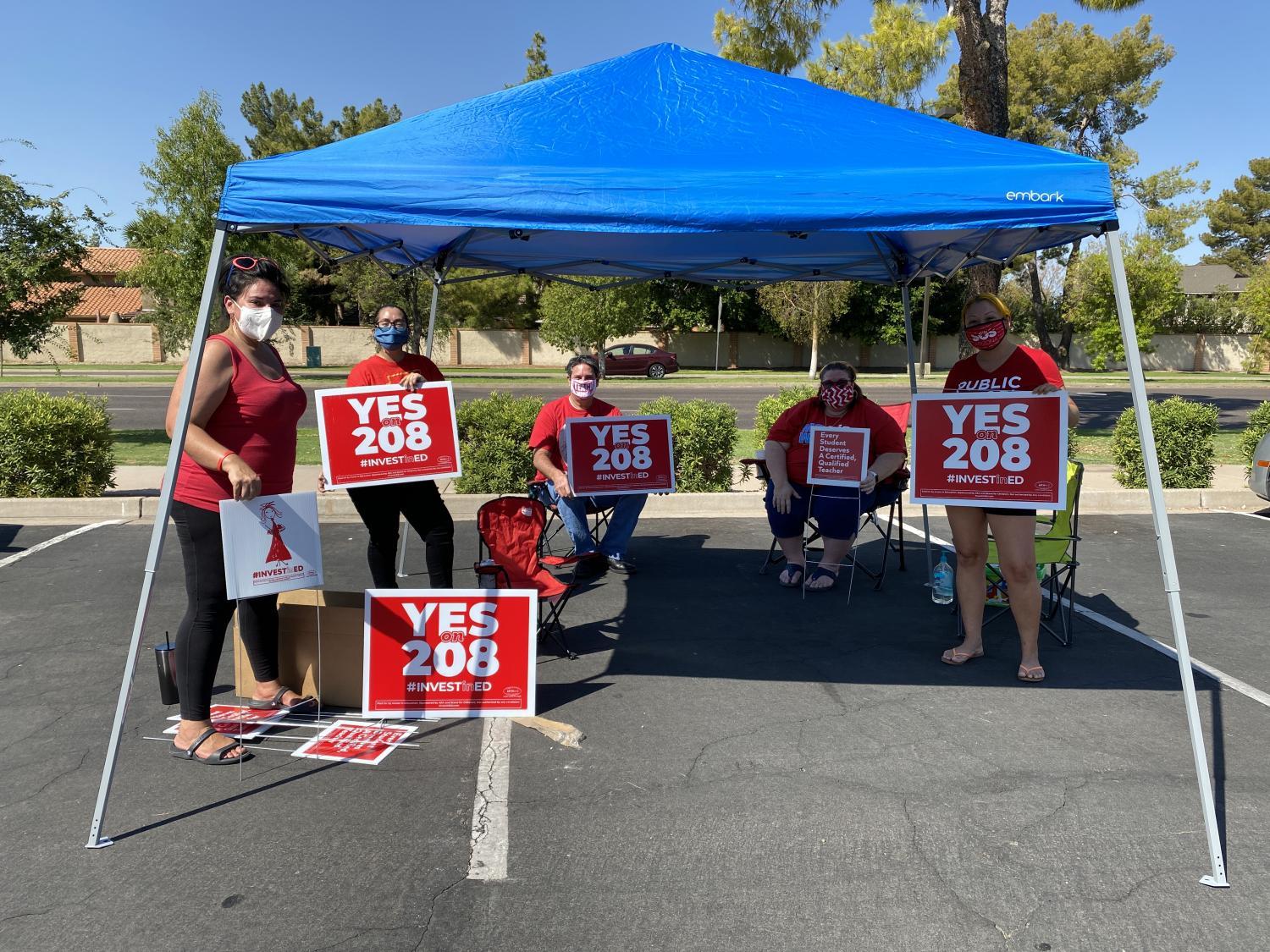 Rocio Hernandez/KJZZ
Proposition 208 volunteers camped out in a parking lot in October 2020 to hand out lawn signs to supporters.

A Scottsdale business owner and a retired judge are challenging the legality of Proposition 208, the just-approved tax hike on the wealthy to provide more dollars for K-12 education.

Attorney Logan Elia claims there is no constitutional authority for voters to levy a tax and then direct how the cash must be spent. That, he told Capitol Media Services, is strictly the purview of the legislature and the elected representatives.

Elia acknowledged that voters have enacted numerous prior levies at the ballot box. That includes the taxes on tobacco products with the proceeds earmarked to fund health care and a 0.6-cent sales tax hike in which voters directed that the dollars be put into classroom spending.

Even the just-approved Proposition 207 legalizing the recreational use of marijuana imposes a new tax on sales.

Elia said that is irrelevant as these levies never were challenged. And that, he said, makes the issue ripe for a ruling by the Arizona Supreme Court as there are no precedents.

But Roopali Desai, who represents the Invest in Ed committee that crafted the measure and put it on the ballot, said the litigation is based on a "half-cocked theory.''

She said the people who crafted the Arizona Constitution and created the power of people to proposed their own laws imposed no such limit on what they can enact. In fact, Desai pointed out, the constitution specifically makes voters co-equal with the legislature, meaning they have exactly the same powers.

Central to the fight is the initiative which imposes a 3.5% income tax surcharge on earnings of more than $250,000 a year for individuals and $500,000 for married couples filing jointly.

Proponents say the levy would raise $940 million a year for education.

Efforts by the Arizona Chamber of Commerce to keep the measure off the ballot faltered when the Arizona Supreme Court said there was nothing wrong with the wording of the description given to voters. But the justices did not rule on the legal merits of the measure, saying any challenge would have to wait until after it was enacted.

Rocio Hernandez and Sky Schaudt/KJZZ
Signs against and for Arizona Proposition 208.

"We believe that voter-initiated statutory taxes are unconstitutional,'' he said.

But the litigation faces some legal hurdles.

That includes a 2004 voter-approved amendment to the Arizona Constitution which specifically prohibits initiatives that require new state spending unless the measure also includes a way to raise the additional dollars. That provision, known as the "revenue source rule,'' was designed to keep voters from redirecting existing tax dollars from one program to another unless they also found the new dollars to finance the new spending.

Desai said the lawsuit is based on the premise that voters can't raise taxes. But that, she said, would require courts to rule that voters never could enact any new spending programs despite the constitutional right of initiative because there never would be the revenues to fund it.

Aside from rendering the revenue source rule meaningless, Desai said what the challengers are arguing would sharply — and she believes, illegally — impair the constitutional right of voters to create their own laws.

Elia, however, has his own legal theory of how his lawsuit does not conflict with the revenue source rule.

"There are other revenue sources other than taxation,'' he said, suggesting that if voters want a new program they could impose new fees or even direct that the money be borrowed. They just can't impose taxes.

Desai, for her part, said the challenge ignores the fact that the people who crafted the Arizona Constitution provided very broad powers to voters to initiate their own laws.

"We have this constitutional provision that's very broad,'' she said. In fact, Desai said, the constitution spells out that people have the same right to enact laws "independently of the legislature.''

One of the plaintiffs in the case in John Buttrick. The former Maricopa County Superior Court judge also was the 1994 candidate for governor of the state Libertarian Party. The other is Ann Siner, CEO of My Sister's Closet, a chain of upscale consignment shops. She complained in a prepared statement that the tax will harm Arizona businesses.

That's because the state first has to certify the results of the Nov. 3 election and the fact that Proposition 208 got 51.7% of the votes cast. That process, known as a "canvass,'' is set for Nov. 30.