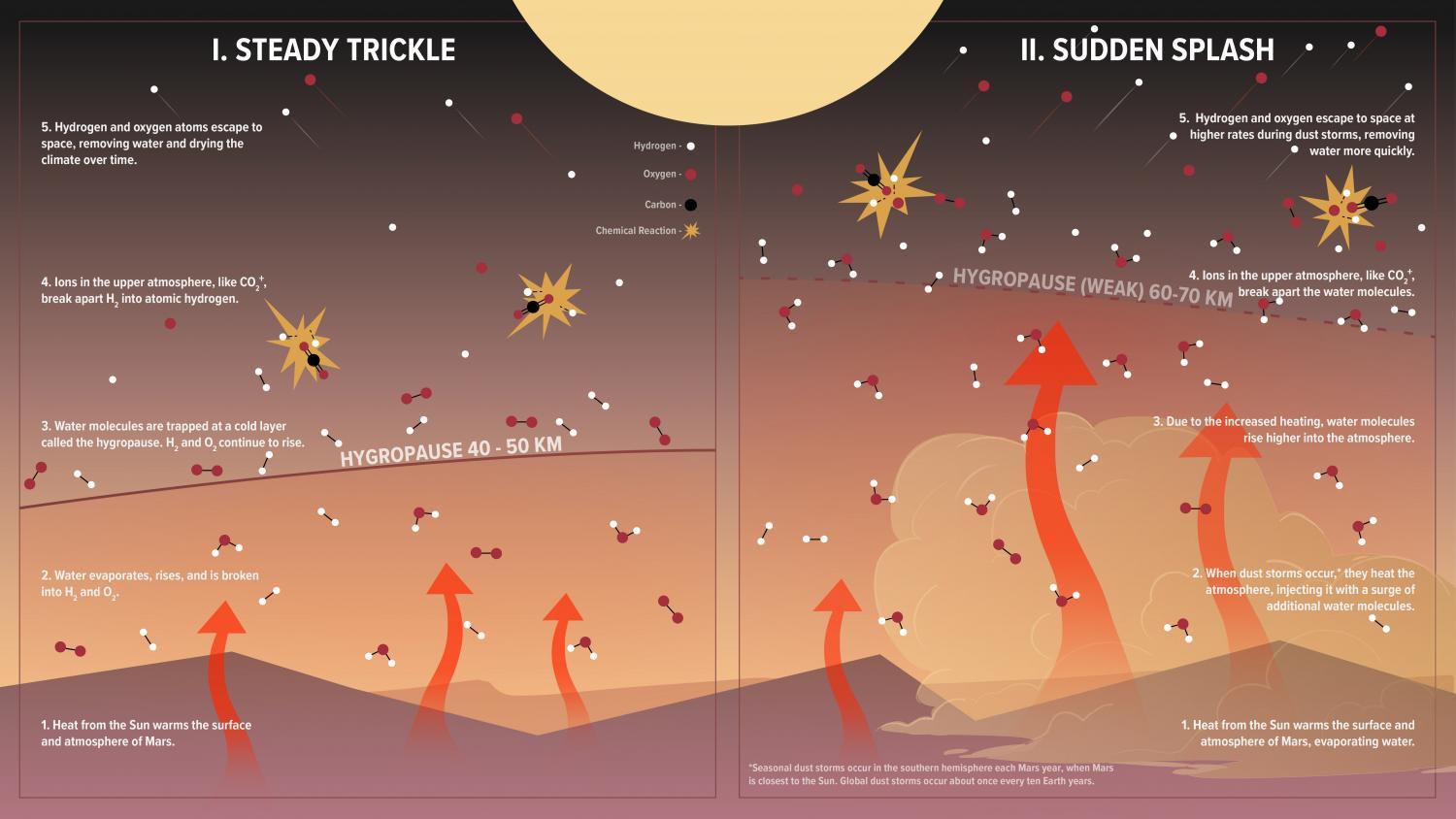 NASA/Goddard/CI Lab/Adriana Manrique Gutierrez/Krystofer Kim
This illustration shows how water is lost on Mars normally vs. during regional or global dust storms.

NASA's Mars Atmosphere and Volatile EvolutioN, or MAVEN, spacecraft has discovered more water than expected in the upper Martian atmosphere.

The research, which is published in the journal Science, could help explain how the once warm, wet planet became today's cold, dry desert.

"We estimate that atmospheric escape to space is responsible for removing a global ocean tens to hundreds of meters deep over the last 4 billion years," said lead author Shane Stone, a planetary chemist at the University of Arizona Lunar and Planetary Laboratory.

Scientists once thought water on Mars lay trapped in a cold layer of the lower atmosphere. There, the sun's rays would gradually break up H2O molecules, freeing lighter hydrogen to loft skyward and escape into space.

Since then, observations have shown periodic bursts of hydrogen that the old model couldn't explain.

"We know what that process looks like from year to year. We know that it could not possibly be responsible for rapid variations in the amount of water being lost from Mars," said Stone, who is currently a doctoral candidate at the university.

Nevertheless, he and his colleagues were surprised by how much water turned up in atmospheric samples analyzed by MAVEN's Neutral Gas and Ion Mass Spectrometer. The mass spectrometer takes in gases as MAVEN passes through Mars's upper atmosphere, then sorts them by mass.

In their analysis, the authors found the episodes of greater water loss coincided with summer in Mars's southern hemisphere, when the Red Planet swings closest to the sun, and with dust storms.

Both contribute to greater heating and atmospheric mixing, which let water reach greater altitudes, where charges particles called ions break it apart. The hydrogen portion boils away into space, while the more massive oxygen portion falls prey to sweeping solar wind, a stream of energized, charged particles that flow outward from the sun.

"Once water is in the upper atmosphere, it's destroyed rapidly — in about four hours. For an atmospheric process, this is incredibly rapid," said Stone.

He added Mars provides the best laboratory in the solar system for studying atmospheric escape.

After graduation, Stone will move on to a post-doctoral fellowship at NASA Goddard Space Flight Center in Greenbelt, Maryland. There he will combine MAVEN observations with data from the European Space Agency's ExoMars Trace Gas Orbiter to study the atmospheres of Mars and planets outside of the solar system.