STEVE GOLDSTEIN: As votes are still being counted and lawsuits being heard by judges around the country, few people would associate the election season with art of any form. But colors — and their metaphorical connection to our current politics — were at the core of how Lisa Sette came up with a new exhibition "blue" at her downtown Phoenix gallery. I recently toured with her to learn more and began by asking what inspired her curation.

LISA SETTE: Well, I think the idea originally came to me by hearing that the state was purple, so we didn't start with the color blue, we started with the color purple — nod to Oprah. And I started thinking about all of the connotations blue had, mostly in art history, but also thinking politically, what would it mean for the state? So it started simply with that color. And we, you know, I thought about are we kind of blue? Is it a Miles Davis kind of thing? You know, are we feeling blue? Like what, you know, what were we thinking when we thought about the color? And so I dove in in an art history sort of way. And, and then it took some twists and turns, partly because it was heating up politically. And it's never linear. When I think about especially a group show or theme show, you know, my mind's pinging all over the place to literature, to music, to everywhere.

GOLDSTEIN: So open — you were open-minded to whatever this would turn out to be, or did you still have something in mind even as it sort of evolved?

SETTE: I was pretty open-minded, especially with the artists that we decided to include, because originally it was, it was many more artists from out of the state and out of the country. And then as we sort of, sort of fine-tuned it, I decided it really made more sense to use as many local artists — Arizona-based artists or artists who had a tie to the state of Arizona — to push the message forward because it really is us attempting to turn the state blue. So it did, it did take, take on a little bit of a different concept than the original. So art is visual. I'm going to do my best to describe this to you and to your audience. We're looking at a dress form on a mannequin. The artist is Annie Lopez and the title is "Relative Alien." And it's kind of like the white Marilyn Monroe dress in "The Seven Year Itch." So it's a halter top dress. And the top part is, is blue. It's cyanotype, which is an old printing process — old photographic printing process. And the top part is language from, I believe, the first paragraph or the first couple of paragraphs of Arizona's bill, SB 1070, which I think is 10 years old now. Hard to believe it. 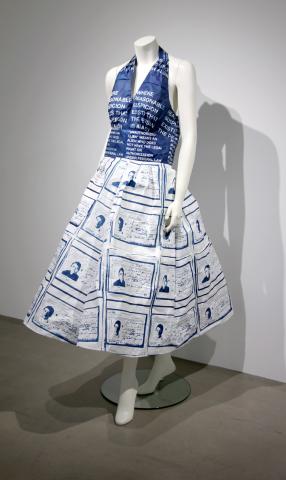 SETTE: And then the bottom half of the dress, kind of the skirt of the dress, are, are the artist's grandparents' immigration cards from 1919. And then the entire, the entire dress is made up of tamale paper. So she's printed this blue cyanotype on white tamale paper. And then there's a small piece here in the gallery by an artist named Michael Koerner. And it's from a series titled "My DNA." And it's a tiny little piece — it's maybe 5 inches by 7 inches. And it's a collodion tintype. So that's another old photographic process. And most people might think of tintypes, they might think back to the Civil War where you took a picture of a loved one before they went off to war because they might not come back. So it's an image, this beautiful, cerulean blue image of, of his hand, of his fingerprints that have kind of coalesced in this weird way chemically. He's, he's a trained chemist as well as an artist. And his mother was 11 in Nagasaki when the bomb was dropped, and she had a series of miscarriages and stillbirths. Eventually, I think in total, had five, had five children. All were dead by age 32 except for Michael. So he's the only surviving sibling. It's not just one generation that's, it's affecting — it's affecting many generations. I mean, I guess what interests me also, just in general with, with arts — artworks are that I love something that's so beautiful on the outside and draws you in with its beauty and its mystery. And then the backstory is something, you know, really powerful, but that beauty is not marred by that, by that backstory.

GOLDSTEIN: We hear blue. And, of course, there are so many different shades of blue. How important is that to, to even show off in terms of just the different tones you're trying to give off?

SETTE: I actually kind of left it up to the artist and a little bit to our curation. But, you know, I thought about the color blue and blue was a latecomer. I mean, we were, you know, early ancient peoples were working with ochres and browns and yellows in their cave paintings. And blue didn't burst on the scene until, you know, much later. And I think in, I think two years ago in 2018, they discovered a new form of blue. So it's, it's evolving. Kind of like our state. This is a piece by Alan Bur Johnson, who lives in Jerome, Arizona. And it's, it's comprised of oh, gosh, how do I explain them? They are transparencies. They're very blue in color and kind of mostly from nature — cicada wings, butterfly wings, things like that. And the entire image is circular. It's called 'Bailey's Blues' and it's based on a scientific phenomenon called Bailey's beads. So when there's an eclipse and the moon covers the sun, there's always a little bit of sunlight that's poking out from that eclipse. And so if I could, I would love to read a quote by Alan. OK, Alan remarked, I feel as though we live in a new dark age where intelligent thought, kindness and respect on all levels have been smothered — totally blocked out. I've decided to let the blockage of light be a void, giving it no voice. Instead, I'm choosing to focus on the peripheral rings of light around an eclipse known as Bailey's beads to address the emerging light or hope while voiding out the central darkness.

GOLDSTEIN: You didn't point this one out, but I'm going to ask you about it anyway.

GOLDSTEIN: So we see a cap. 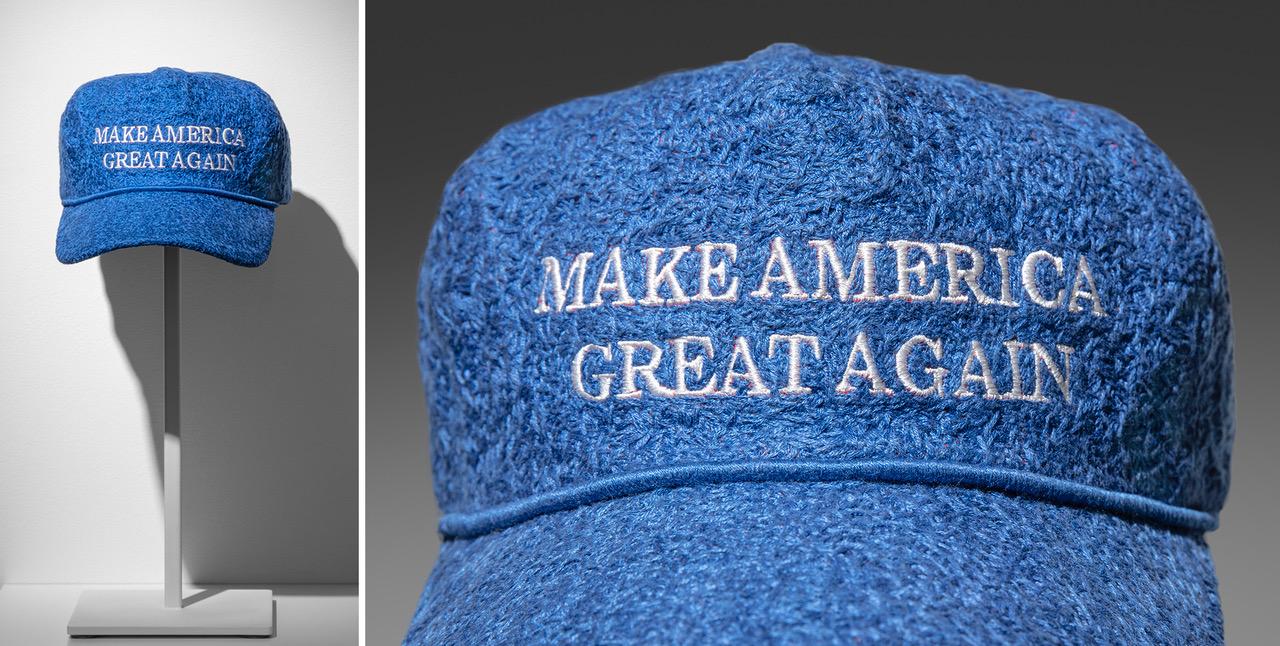 GOLDSTEIN: A blue cap, which typically we're used to seeing in red. And it says, "Make America Great Again." And it's just it's —

SETTE: I would love for you to walk over and just look underneath it. Let's do it together. So we're looking underneath this blue cap and you can see that it's red poking out. This is an iconic, red MAGA hat that the artist bought online. And by stitching thousands of blue stitches of blue thread over it, I think over the course of about five months — she bled over this piece, actually, literally — she's transformed it. So Ann Morton, the artist, says that in leaving the words but changing the background, the entire perspective changes. She had calluses on her fingers when she brought the piece in. I mean, it really was kind of a labor of, of love to create this piece.

GOLDSTEIN: That was my visit late last month before Election Day to the Lisa Sette Gallery in downtown Phoenix for the "blue" exhibition. It's open through Jan. 2 by appointment only. And you can see images on our website, theshow.kjzz.org.