How Heat, Wildfires And Drought Are Changing Arizona's Wine Industry 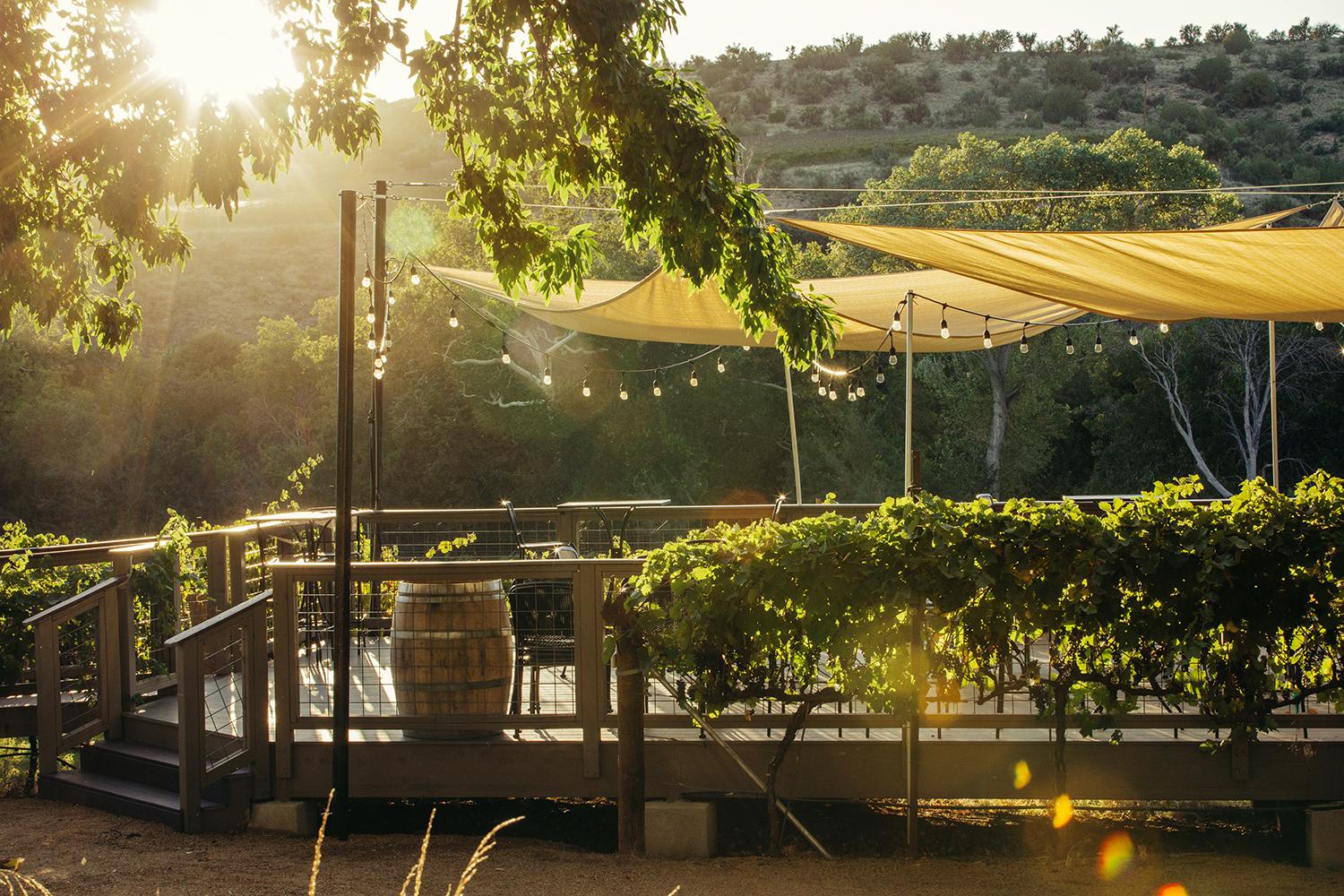 MARK BRODIE: The summer was one of the hottest on record in Arizona. The monsoon season was more of a 'non-soon' and wildfires ravaged much of the state.

STEVE GOLDSTEIN: Mark, thanks for the reminder on how great 2020 was, by the way.

BRODIE: I'm sorry about that. But, you know, we have at least one great thing going for us.

GOLDSTEIN: Other than you, what is that?

BRODIE: Oh, that's kind of you. It's a burgeoning wine industry.

GOLDSTEIN: That is, in fact, true. But how did all of this — the heat, no rain and wildfires — affect the state's various wine regions this year?

BRODIE: That is an excellent question. And it's one we took to Eric Glomski, director of winegrowing at Page Springs Cellars in the Verde Valley. He spoke more about it with our co-host, Lauren Gilger, beginning with the effect of wildfires and their smoke. 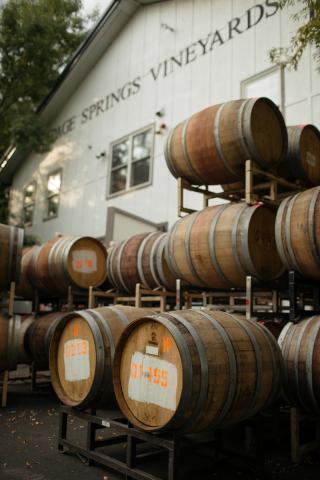 ERIC GLOMSKI: One of the facets of this warm summer for a grower is that we ended up harvesting kind of early because there was so much heat. And a lot of the, in particular, the smoke that we saw coming all the way over from California kind of hit only, really only the end of harvest and after harvest. So that was great. So we didn't have any obvious direct impacts. What I will say, though, is a handful of other small fires that occurred — for instance, the ones on the north side of Tucson, down in the Willcox area there was a fire in the Dragoons. The Tucson fires blew over the north side of the Willcox Valley, where there's some vineyards, including Arizona Stronghold's  vineyard. And then down in the Dragoons, a gentleman named Jim Graham has Golden Rule Vineyard, and I would suspect that he saw some impacts from that, as did the people buying grapes from him. It hasn't been anything like what we have been seeing in the North Bay, in Napa, where literally vineyards and wineries are burning down. But the other huge impact from all the smoke is what we call smoke taint, which essentially is like smoking a piece of meat. You add this strong, smoky flavor to your wines and it can make it challenging to market the wine later.

LAUREN GILGER: What about the lack of a monsoon season? I mean, this was not the first year in a row here where we've seen very little precipitation at the end of the summer there like we're used to. But does this affect you at all?

GLOMSKI: Gosh, you know, it's such a double-edged sword, because prior to getting into winemaking, I worked as a professional field ecologist. And I've always felt, you know, a kinship with the landscape, the earth, I spend tons of time hiking and backpacking, rock climbing. So in my personal life, not having these rains and just looking around our landscape, it's just shocking and troubling. On the flip side of the coin, believe it or not, some of our best vintages are when we don't have much of a monsoon pattern. In a lot of ways it's really great. But meanwhile, you look around your vineyard, and you're worried about fire, and you're watching all these beautiful native plants die out. You know, it's kind of a catch-22, honestly.

GILGER: Yeah. So then let's talk a little bit about the long-term effects here. As you mentioned, the, the heat, right, that we saw record temperatures this summer. And a lot of the research says this is the new normal. We're just going to see more heat, less rain going forward. How does that and how could that for a very long period of time, you know, affect you and other Arizona winemakers? 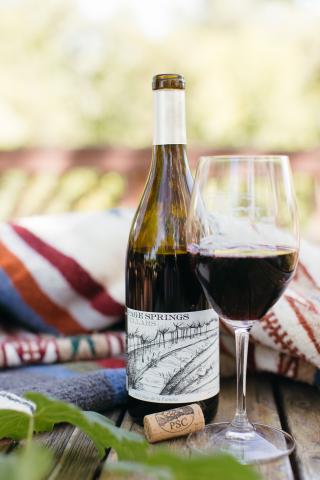 GLOMSKI: You know, I'm glad you asked, Lauren, because, honestly, that concerns me more than the monsoons per se, from just a grape growing perspective. It's bizarre because I've only been growing grapes in Arizona 16 years now. And when I first planted 16 years ago, which you would think of as a geologic blip, you know — a blip on a blip. My harvest used to start in mid-September and now a scant 16 years later, it's starting in mid-August. You know, in 16 years, a full month movement. So there's that. And then there's the, wow, are my lower elevation vineyards going to get too hot? And do we need to be thinking about trying to find microclimates at higher elevations? We need to get up higher because we need to moderate the amount of heat we're seeing every summer. So there's that. That's just simple viability. But the other thing, too, is that it has a potential to profoundly affect wine styles too. I'll give you an example. This year with this hottest summer in recent memory, our red wines — we ended up making red wines that are darker and bolder and, you know higher alcohol — jammier, richer, darker than, than anything we've ever made. And honestly, our house style is, is anything but that. We make more — like, I call myself a Francophile. We make more lithe, feminine, delicate, you know, more red fruit-driven, slightly higher acid wines. You know, with this additional heat, red wines in particular, and certain grapes end up tasting more and more port-like and there's more like blackberry, date, fig, prunes and things like that, whereas I'm looking for freshness, like red raspberries and Bing cherries and hints of mandarin and things like that. So that also concerns me for sure.

GILGER: That's really interesting. So Arizona's wine industry is, you know, not brand new at this point, but still sort of on its way up, I would say, in terms of recognition and growth and all of those economic things. Do you anticipate this really affecting that? Like just as they're getting to the place where collectively you all are doing something that's getting noticed, it's going to be some big decisions you all have to make?

GLOMSKI: Yeah, you know, that's a really, really good question. It's complex because there are other layers to this. I think there are a lot of cultural practices. And I think we're going to have to take a look at — let's say we want to hold on to the same vineyard sites because it's a lot easier to plant a different grape. I mean, even that's not easy because, you plant a grape, takes five years for you to get a good crop off it and have it be productive economically. But that's certainly a lot easier than selling all your land, buying a new place, drilling a new well and starting completely over. So I'd suspect that over time here our growers are going to adapt by planting new things, pulling out old things. And then, if it gets so severe and we don't get our act together, maybe to start thinking about climate change on a more global level. I think there are ways for us to adapt, but it's going — it'll be difficult. And it'll also probably be just like COVID right now — businesses that may artistically or otherwise be amazing, if they're not super sound financially, we might lose them. And I think the potential for that to exist down the road here with vineyards and wineries is there as well.

GILGER: All right. That is Eric Glomski, director of winegrowing at Page Springs Sellers, up in Cornville. Eric, thank you so much for coming on The Show to talk about this.

GLOMSKI: Yeah, it's a pleasure. Thanks for sharing this with people out there.