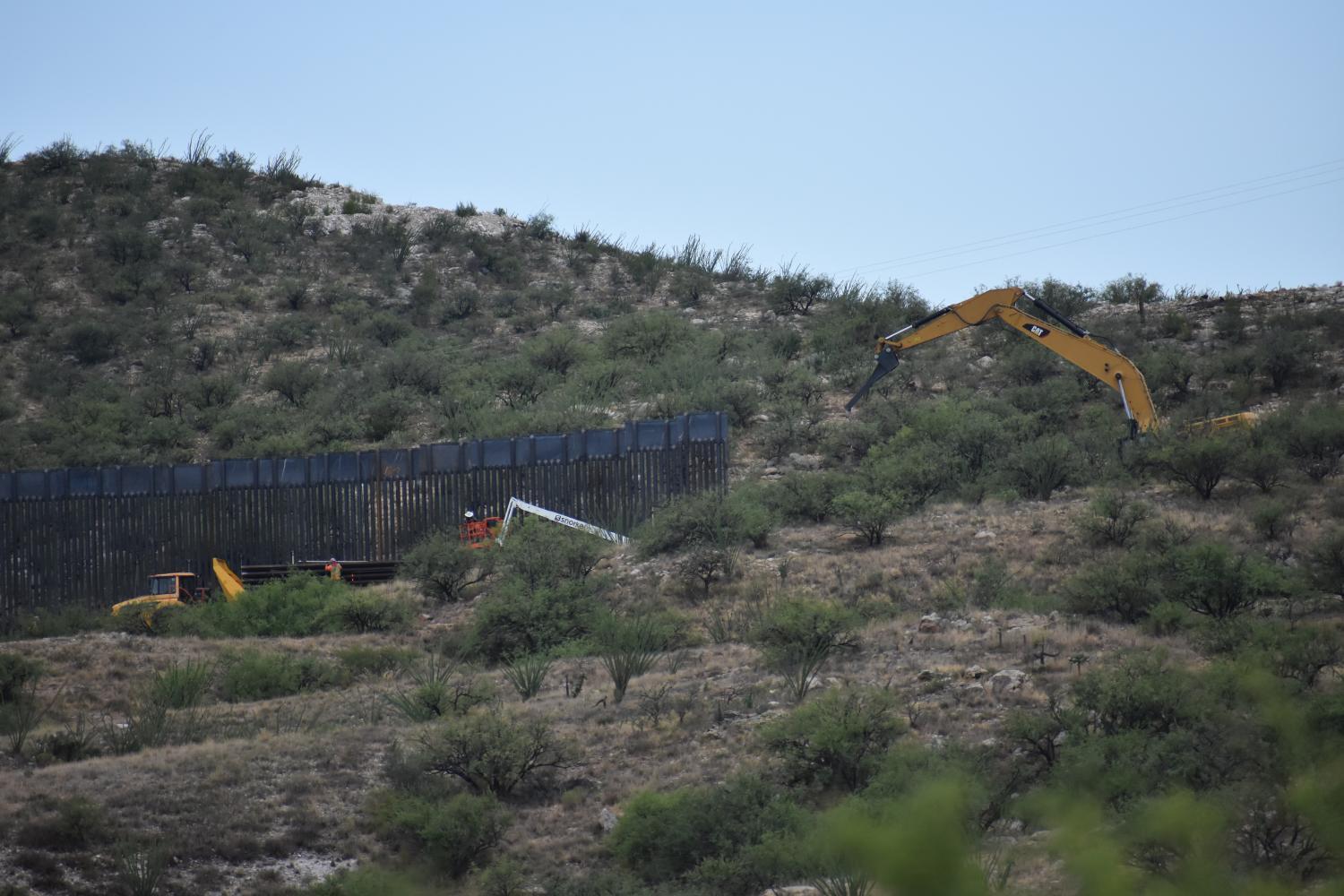 Michel Marizco/KJZZ
Thirty-foot-high border wall was installed along the border near Sasabe, Arizona, and Mexico this summer.

In downtown Nogales, the Trump administration draped the existing border wall in coils of gleaming razor wire two years ago. Nogales, Arizona, Mayor Art Garino isn’t optimistic that the incoming Biden administration will take it down.

"You know how the government is. Once they put something up, it very seldom comes down" he said, laughing.

The report shows that since Trump took office, the U.S. has built 348 miles of fencing and another 52 miles of secondary border wall.

In an email, a CBP spokesperson wrote: "The majority of contracts have been awarded and construction is well under way for the approximately 738 miles funded to date. Since the U.S. Border Patrol began constructing border barriers nearly 30 years ago, these barriers have proved to be a critical component in gaining operational control of the border and allowing for greater efficiency of manpower."

Last winter, workers blew up land along Organ Pipe Cactus National Monument's border with Mexico to lay footing for the new wall. Semitrucks laden with steel poles convoy down to Sasabe to replace 18-foot-high walls with 30-foot-high ones. In Cochise County, the southernmost spur of the Arizona Trail was shut down so a border wall could be built there.

A coalition of plaintiffs sued the Trump administration for using about $4 billion of military funding to build 270 miles of the border wall. That case is heading to the Supreme Court in February.

ACLU attorney Dror Ladin leads that suit and he’s waiting to see if the new president will withdraw the petition to the Supreme Court. And if he doesn't, "he will be substituted for Trump and the lawsuit will be against Biden as to what is to be done with these illegal wall sections and then he and his administration area going to need to decide if they want to defend this flagrantly illegal thing that Trump did and whether they want to work with border communities and environmental groups to redress it," Ladin said.

Candidate Biden said he will stop wall construction but never said he would tear down the new border wall, a sore point for some of those opposed to the border wall in Arizona.

Southern Arizona Democrat Raul Grijalva said that he supports Biden's plan to cease funding the border wall's construction. But said Homeland Security will need an overhaul of its own.

"The accountability and transparency within Homeland Security within its top ranks, that has to addressed," he said.

Vicki Gaubeca heads the Southern Border Communities Coalition in Tucson. She hopes the incoming administration will focus on more humane policies rather than following policies that drive people to try entering the U.S. through remote areas.

"We need to also look at ports of entry and figure out ways to open up more channels for people to enter the United States in a way that allows them due process," she said.

Gerardo Carreon
Vehicle barrier designed to stop cars but not people or wildlife is being replaced along Arizona's border with Mexico.

Many people in Mexico share their northern neighbors’ concerns over the harms U.S. border wall construction has caused in the region: severing Indigenous lands, destroying sacred sites and devastating the natural environment. And they want building to stop.

Gerardo Carreon, who heads the nonprofit Naturalia, AC in Sonora, says simply halting completion of the wall won’t be enough to counteract significant, and potentially irreparable, damage to the environment on both sides of the border.

Instead, he says, the Biden administration should tear down existing sections of the border wall in critical areas where it cuts across rivers and wildlife corridors for jaguar, black bears, ocelots and other endangered species.

But Duncan Wood, with the D.C.-based think tank the Wilson Center, rejects the possibility that the incoming president will take that step.

There’s no way they’re going to pull down a barrier that has been put in place on the U.S.-Mexico border because that would be political suicide," he said.

He says there’s little political will to undo what U.S. tax dollars have already paid for. And he thinks Mexico will continue to face diplomatic pressure to participate in migration enforcement within its own borders, as it did under the Obama-Biden administration.

"What the Trump administration did was take that up several levels," he said.

But, Wood says, U.S.-Mexico relations during a Biden presidency likely won’t be as narrowly focused on migration as they have been for the last four years.

"I think that we will see a more nuanced bilateral relationship."

One that puts greater emphasis on trade, human rights, corruption and climate change.

And that gives Carreon hope.

He says a U.S. administration invested in fighting climate change and protecting natural resources might listen to conservation scientists studying the impacts of the wall on both sides of the border, and heed their calls to knock it down and begin restoration efforts.

At least, he hopes so.