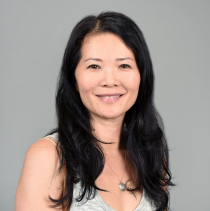 LAUREN GILGER: It might seem like a year ago at this point with the election in between, but just last week, a viral video out of Scottsdale highlighted the racial divide that can happen between minority groups. Scottsdale man Paul Ng approached a Black man, Andre Abram, as he was preparing to shoot a music video in Old Town Scottsdale, and he questioned what he was doing there. Ng told Abram, quote, "I am a racist." And he told him that he shouldn't be there. He was arrested after the incident for disorderly conduct. It brought to light what our next guest calls interracial racism and the long, complicated history of racial tensions between Asian Americans and African Americans. Karen Kuo is an associate professor of Asian Pacific American Studies in ASU's School of Social Transformation. And I spoke with her more about this. We began with some history. Through a lot of American history, there was actually solidarity between these two minority groups.

KAREN KUO: Yeah, I mean, I think that when we look at these videos and other media clips that sort of exploit, you know, this interracial conflict is that it really does hide the solidarity that has occurred historically between Asian Americans and African Americans. And we can even go so far as back as W.E.B. Dubois writing his book about the 'Dark Princess,' which is a South Asian woman married to a Black man. And of course, many of my students often don't have any idea that Asian Americans were hugely participatory, not only in the civil rights movement, but were active in the Black Power movement as well. Two very well-known activists, Grace Lee Boggs and Yuri Kochiyama, who were Black Panthers and part of the Black Power movement, as well. Yuri Kochiyama actually cradled Malcolm X's head when he was shot, even though the movie actually shows otherwise. So there is a very rich history of Asian Americans and African Americans. But I think the important thing to sort of understand, too, is that, you know, racism is, is endemic to every sector of our society. And in fact, white supremacy, rather than seeing the conflicts between ethnic minorities, is what sort of underscores, you know, these sort of behaviors and ideologies. And so when we think of it that way, we can sort of see how Asian Americans have been historically also been asked and in various ways to participate in white supremacy and anti-blackness. So that during the civil rights movement, while you had Asian Americans participating in it with Blacks and Native Americans and Latinx people, they were also being upheld as the racial model minorities. They had experienced a lot of racism because of immigration exclusion acts against them, taking away of their citizenship. A lot of these things people don't actually know about Asian Americans and immigrants. But they were told that they were, they somehow overcame all this and they became successful. And so they're asked in certain ways to sort of participate in upholding the sort of image that the U.S. is colorblind and a meritocracy and rewards them regardless of what has happened to them. And this also is a way to sort of chastise the so-called, quote unquote, "bad minorities" who are militant or who are not going to, you know, go along with the status quo. And so this is where this racial triangulation then between Blacks and whites and African and Asian Americans occurs, where one group, Asian Americans in this case, are given opportunities to participate in anti-blackness and white supremacy.

GILGER: So this is something that that's been a pattern and sort of exacerbated by white supremacy, it sounds like, a the same time that you also saw solidarity between these two groups. Does it still persist today?

KUO: Yeah, I think we see both of it. I think there's always been tensions throughout, you know, in every sort of decade. Right now, what we're seeing with the protests of Black Lives Matter, I know that a lot of Asian Americans sort of came out to speak about the participation of, you know, the Hmong police officer who just sort of stood by and watched George Floyd be beaten by the police. And many came out sort of to say, "You know, look, we're Asian Americans. We do not condone this. And yes, we admit there's, there's racism in our communities." And that, of course, is very real. And I like to also bring this up with my students. During the 1992 L.A. uprising, Korean Americans were asked, you know, "Why are you so racist towards African Americans? What are they doing?" And many of them gave a very surprising answer to a lot of white Americans, which is, "Well, we got a lot of American TV and every time we watched American TV, Back people were shown as criminals or thugs or, you know, militant. And so this is the impression we had — the U.S. exported its racism to us and this is what we came with."

GILGER: So let's talk a little bit about what's going on today. Like, as we've seen sort of the racial unrest in this country rise as we continue to see the killings of Black Americans by police in particular, we've seen also various Asian Americans speaking out about this issue, about interracial racism and trying to be a part of that movement. What do you think it is about this moment that makes speaking out against this feel like it must happen for a lot of these groups, particularly these younger people who want to get involved?

KUO: I mean, I recall hearing what Angela Davis was saying, that this is really an unprecedented moment. Like, we've, we haven't seen the kinds of, kind of interracial collaboration  opposing anti-blackness and for Black Lives Matter in history. And so this, this, of course, is an opportunity. And I think that a lot of Asian Americans also feel that — it's not that they haven't been saying this for decades. It's somehow that this is a moment for us to really sort of reiterate that as a community, as a community that has experienced racism, that we also have to condemn anti-blackness, and that it is our responsibility also as racial minorities in this country sort of change the landscape of race and how we think about it and how we participate in it.

KUO: Yeah, I mean, I think that white supremacy is always that dreaded phrase that nobody wants to hear. And even in Asian American communities, I think that this has really provoked a lot of Asian American communities to start to really talk about this, and to really face their, why have certain communities — because this is also been the case, too. We talked about this where there's a couple of, you know, Asian American community organizations that have not spoken out against these killings and anti-blackness. And at the same time, there are many that have as well. And so I think that this is an opportunity for us to sort of create this dialogue that in order for us as a community, as Asian Americans, to be able to move forward, even with plans for our own education, about racism and our protection for ourselves, as well, is that we have to build interracial coalitions and we have to think intersectionality.

GILGER: All right. That is Karen Kuo, associate professor of Asian Pacific American Studies in ASU's School of Social Transformation joining us. Karen, thank you so much for coming on The Show to talk about this.

KUO: Thanks for having me.